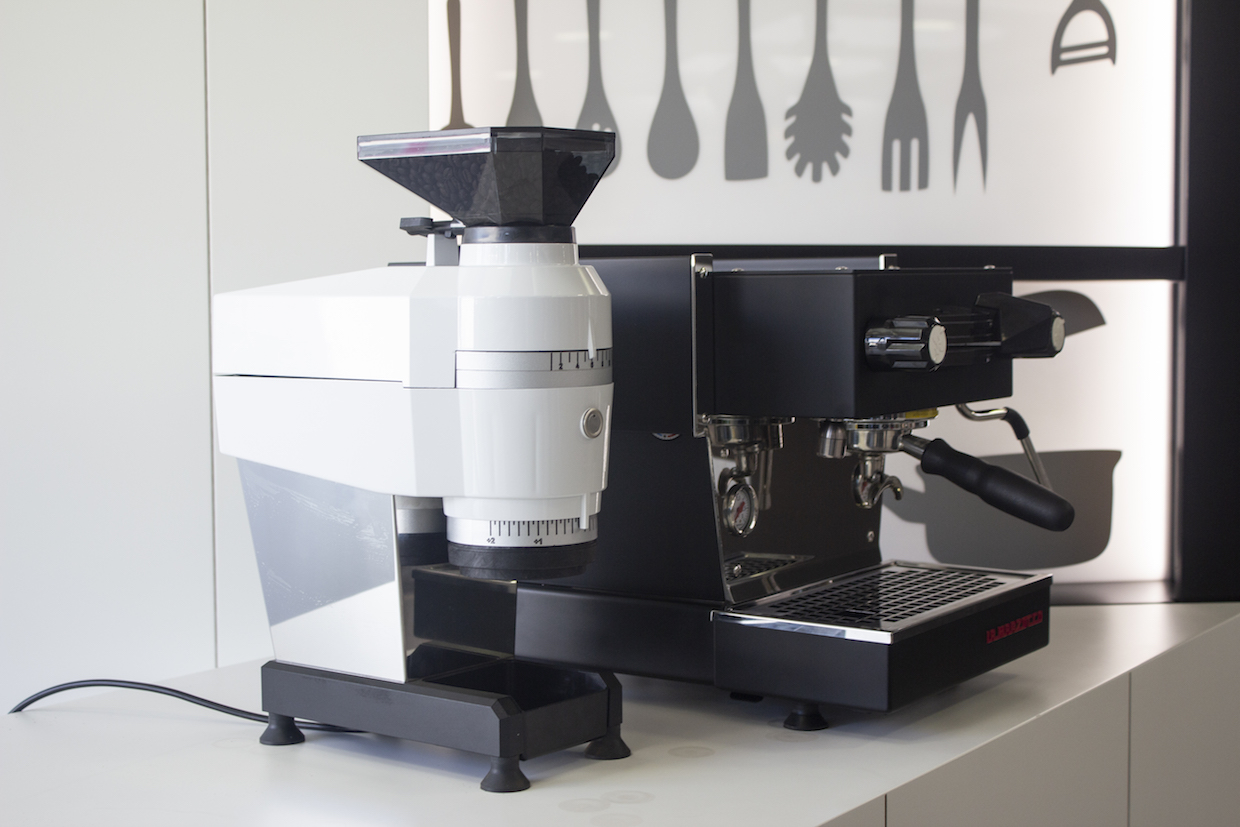 A La Marzocco Swift Mini grinder in white alongside a La Marzocco Linea Mini. International sales of the Swift Mini through the La Marzocco Home platform are expected to begin this month, according to the company. All images courtesy of La Marzocco.

Espresso machine titan La Marzocco has recently thrown its full innovation and design weight into the development of a new range of LM-brand grinders. The two fruits of that labor revealed at trade shows this past year include the Swift Mini, aimed primarily at high-end home and office users, and what’s for now called the Swan, which the company believes will revolutionize the field of professional espresso grinding.

The La Marzocco Swift Mini is currently en route to distribution partners around the world for delivery to purchasers beginning this month, according to the company. In essence, the Swift Mini takes the automatic dosing and tamping system of the company’s existing high-volume commercial Swift grinders and rejiggers it down into a compact, home-friendly machine.

Though it is a proven technology that has reduced the training time and improved consistency behind commercial counters for roughly 15 years, the Swift’s dose-distribute-tamp mechanism remains an innovative solution that has not readily been accessible to home and breakroom baristas.

“It’s an incredible solution to this problem,” La Marzocco Global Product Manager Scott Guglielmino told Daily Coffee News. “The core technology is old, really tried and tested, and the goal of this product was to take that core technology and move it into a more domestic platform.” 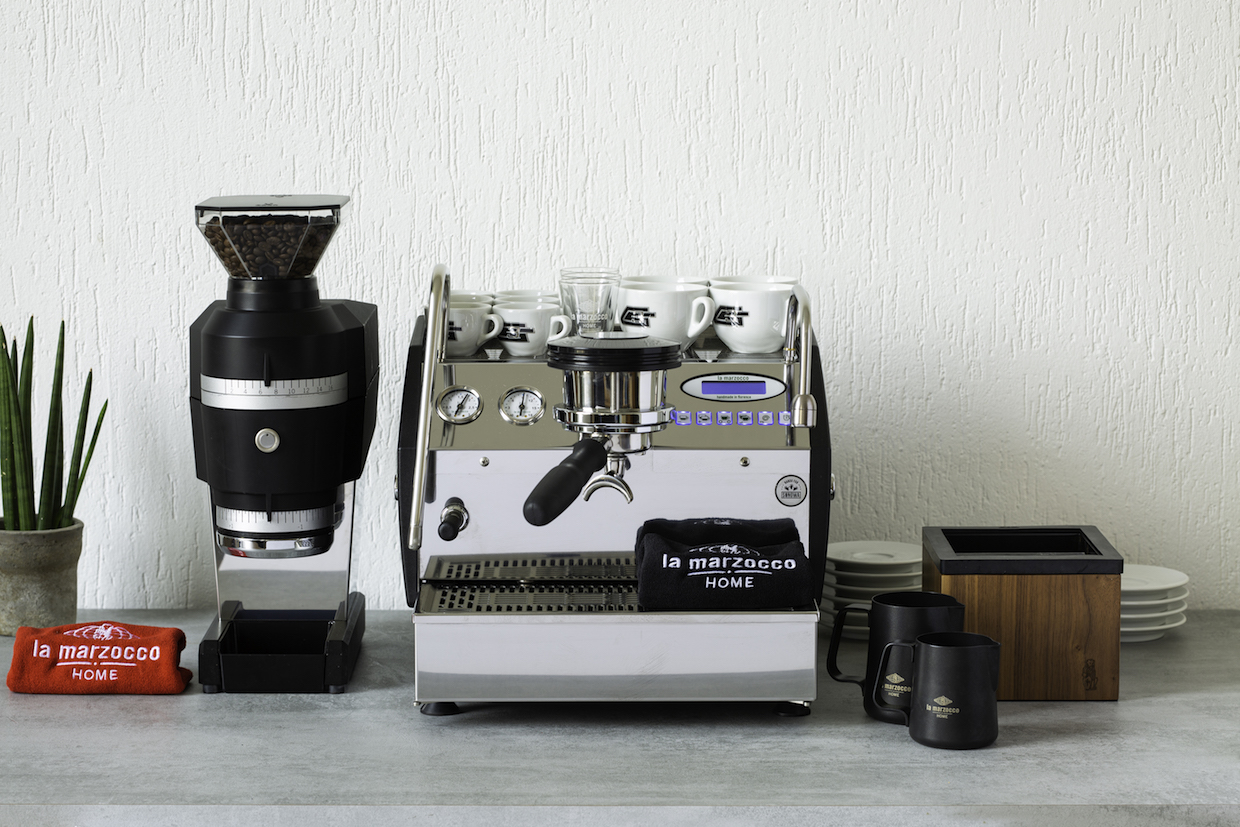 The Swift Mini’s ground coffee distribution and tamping system incorporates an impeller on an axle that spins independently of the burrs, working slowly upward against a precisely calibrated spring as it spreads and compacts ground coffee below. Guglielmino described the action as like “a corkscrew, in reverse.”

Users set the volume of coffee they want in the basket by turning the machine’s lower adjustment ring. Inside the machine, that adjustment alters the position of a switch that turns off the burr motor. As coffee accumulates and gets distributed and compressed in the portafilter basket, the impeller assembly rises until it hits that switch, stopping the burrs. The impeller continues to spin for a few more seconds, gathering and compressing the last bit of coffee from the grind chamber.

The result, according to the company, is exceedingly well ground coffee, distributed evenly, tamped and ready be locked onto a machine for extraction. To prevent channeling during extraction, the Swift Mini is paired with portafilter baskets with a matte finish whose almost indistinguishable texture promotes adhesion between the coffee and the walls.

In offices — where companies are increasingly investing in higher-quality breakroom coffee and equipment — Guglielmino sees opportunity for the Swift Mini to level the playing field between coffee geek employees and those just wanting to enjoy the perk of great coffee without having to develop professional barista skills. 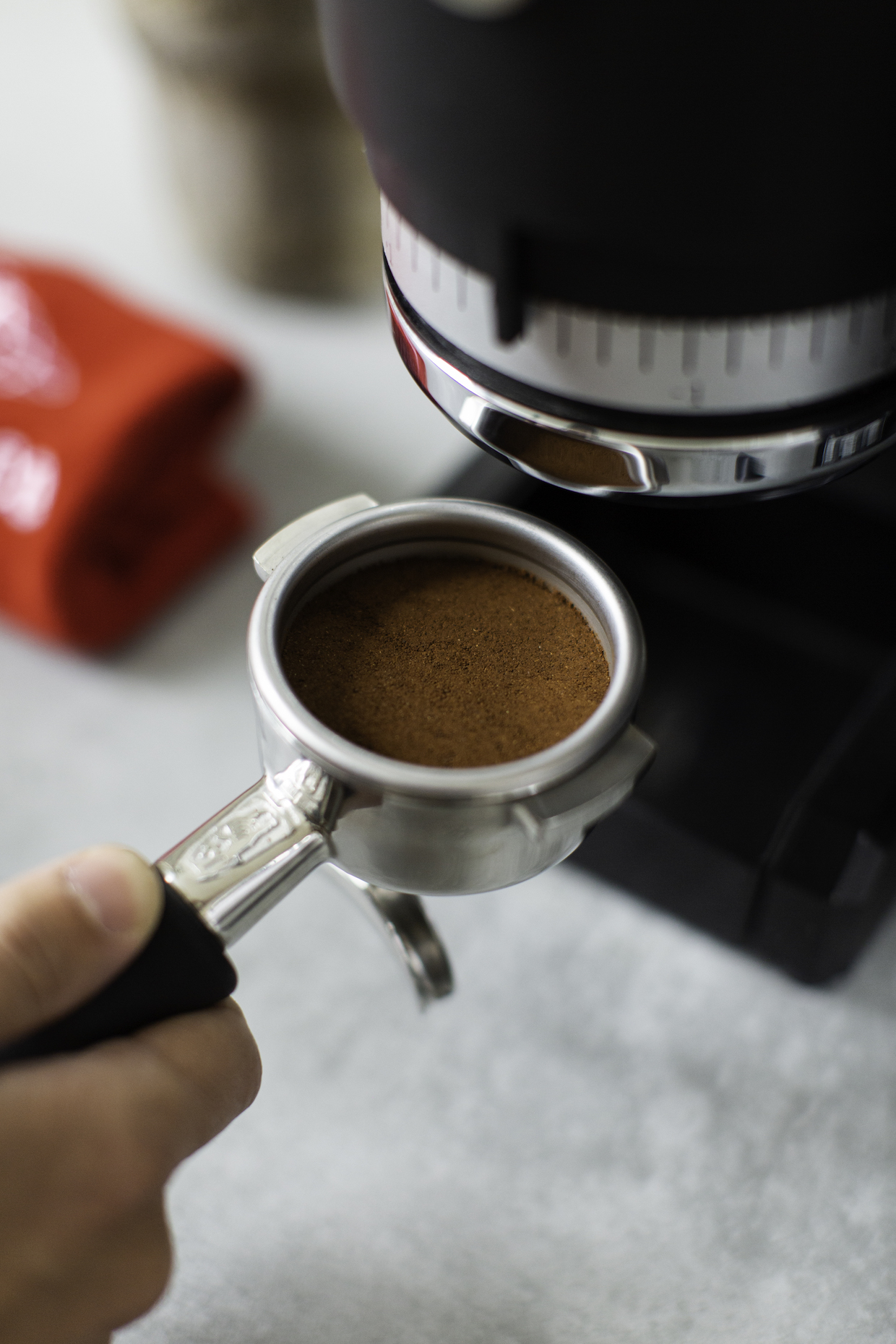 The La Marzocco Swift Mini involves automatic dosing and tamping for the sake of consistency and users’ time.

“The goal is to democratize making beautiful coffee, simply and neatly,” said Guglielmino. “We do that by taking out all of the work. As roasters are spending more and more time selling coffee to these nontraditional wholesale customers, this type of grinder could really help them.”

With the price currently published on the La Marzocco Home global website being €1,615 (Just under $1,800 USD), Guglielmino imagines the home-based demographic of Swift Mini users to include busy, affluent professionals that enjoy high-quality coffee and are comfortable making an investment in having it at home without an extensive commitment of time and obsession.

“They’ve come to expect great coffee — they want to make it at home but the don’t want to make coffee their hobby,” said Guglielmino. “The Swift Mini will be a financial investment for them that is a great means to sit down and enjoy a cup of coffee at home without having to go out to a coffee bar.”

Another unique feature of the Swift Mini is the ability to separate the upper assembly where the burrs are housed and swing it to the side, bypassing the impeller system in order to grind a smaller single-shot dose or directly into a filter for brew methods other than espresso. The 32-millimeter conical burrs inside the Swift Mini are exclusive to La Marzocco and are installed within a mechanism that spins the outer ring burr of the conical burr set rather than the center cone burr, which was formerly the convention. 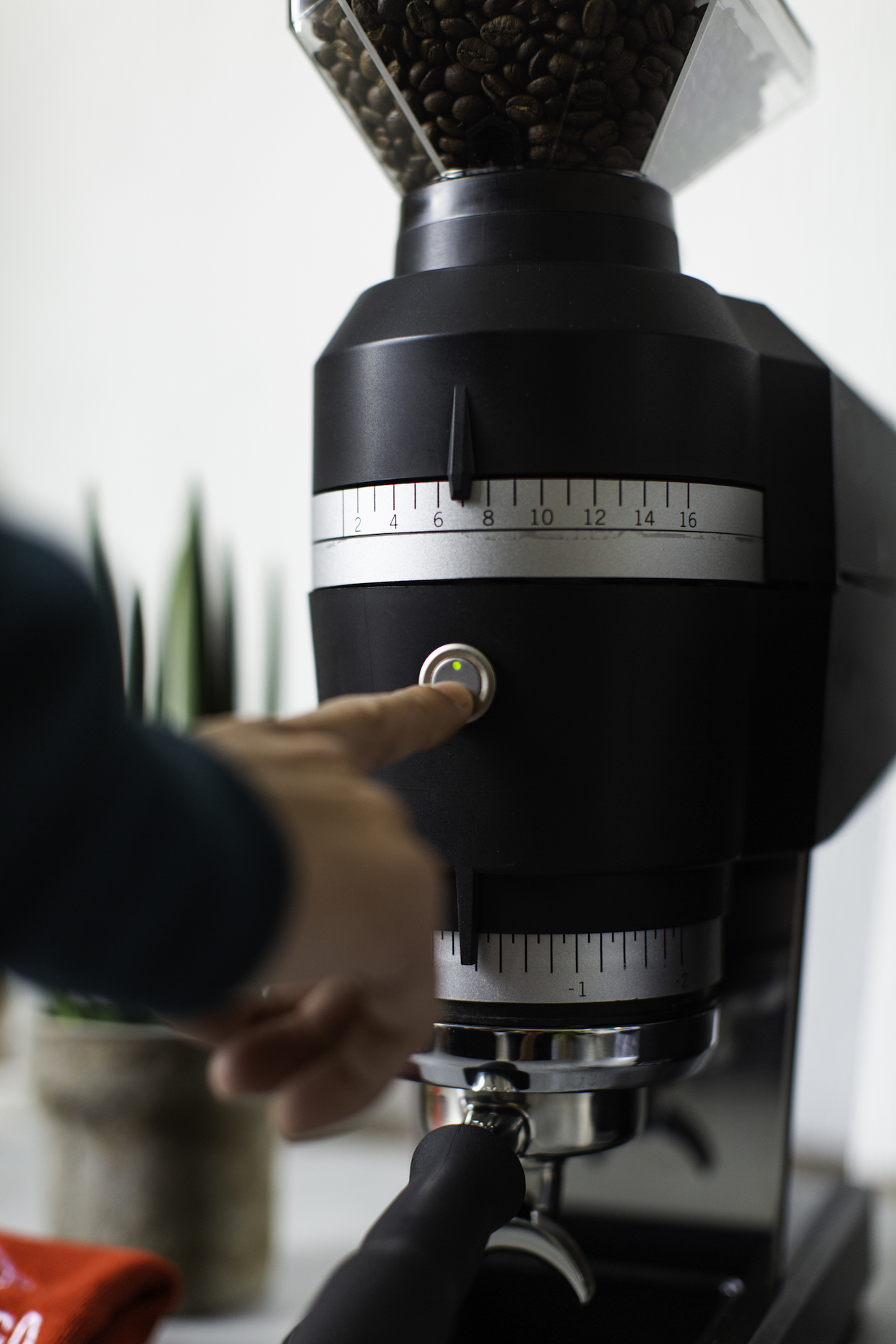 The Swan, meanwhile, is a project LM has kept under wraps for over a decade, and is the revolutionary grinder Guglielmino said won’t be ready for a proper launch until later this year. Though a working prototype of the machine has been on display at trade shows, La Marzocco will remain mostly silent about the inner workings of the Swan until delivery is closer at hand, and may change its name as well.

What is currently known about that machine is that it centers on conical burrs; the motor is displaced from the grinding action for temperature maintenance; it stores different grind profiles to be executed at the push of illuminated Linea PB-style buttons; it measures doses not by time or weight, but by revolutions of the burr; and it sends positive and negative electrical charges into contact with the coffee to eliminate any static charge buildup.

“Full stop, it addresses all of the problems baristas have, and it’s going to change what the de-facto grinder on a bar is,” said Guglielmino. “If you list off what baristas complain about — clumping, retention, heat, general user interface and dose consistency — we have solutions for all five of those, and they are compelling solutions. The Swan has been a 12-year project. There is an insane amount of innovation in that grinder that is going to really change the grinder manufacturing world.” 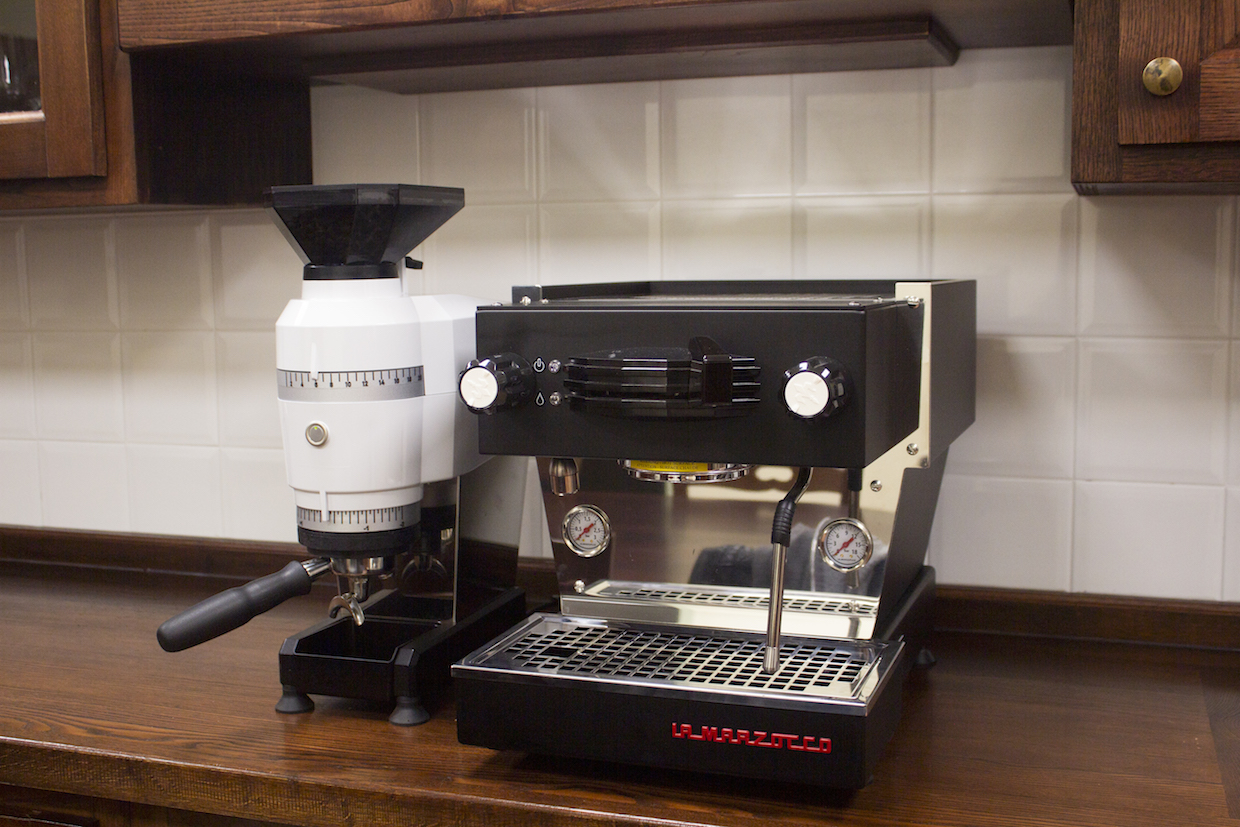 As La Marzocco global awaits the landing of the Swan, La Marzocco Home has another trick up its sleeve: A “connected” home espresso system. The company has developed an app for controlling various features of Linea Mini and GS3 machines via smartphones and other handheld devices.

Guglielmino said the app is particularly impactful for the Linea Mini, as it unlocks an array of capabilities that were previously not controllable by users. Owners of the setup will be able to skip the click-wheel thermostats and set and monitor the temperature digitally, to a tenth of a degree; adjust the preinfusion parameters; set a wake-up/heat-up and shut-off timer, and more.

The Home IoT app will launch in March 2020, according to Guglielmino. Also in 2020, the company will be rolling out a hands-free milk steaming machine, and upgraded versions of both the GB5 and Strada commercial espresso machines, all of which were displayed at HOST in 2019 and none of which will be discussed publicly until closer to their respective launches.

Said Guglielmino, “We’re trying to keep the focus on the products as we launch them, instead of burning everybody out with fatigue of hearing about ‘the next great Marzocco’ as they’re launching a current, new great Marzocco.”

[Editor’s note: This story has been updated to clarify some elements of the development of both the Swift Mini and the Swan.]