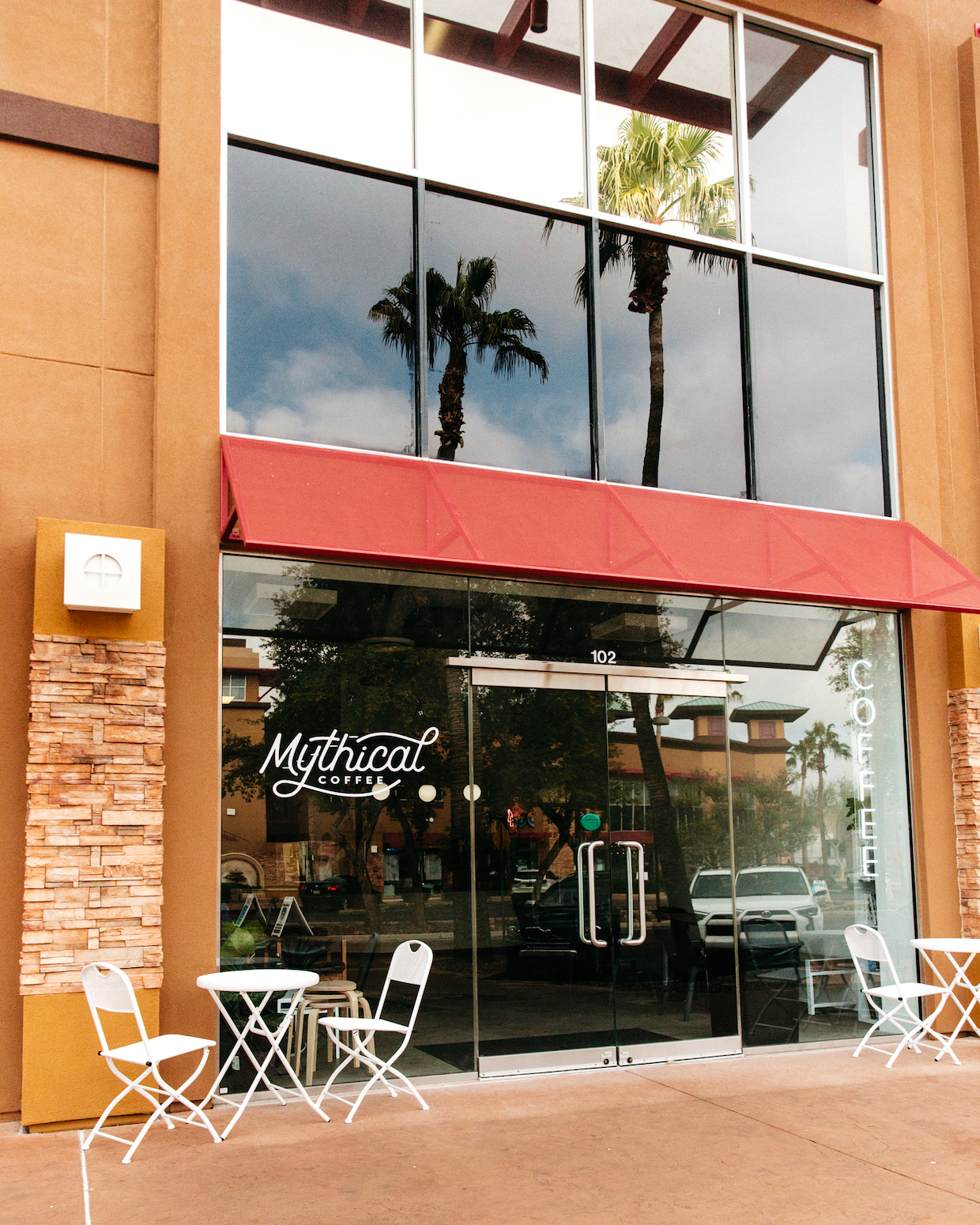 Dark roasts are “stronger;” coffee dehydrates you; a proper macchiato stands 10 inches tall. These are just a few of the many popular myths about coffee. Combating these and others in Gilbert, Arizona, is Mythical Coffee, which now boasts its own coffee creation story.

“We see mythology as a way to tell stories and connect with people in a way that makes what we do more accessible,” Eric Hervey, co-founder of the startup roasting and retail company, told Daily Coffee News. “Myth is deeply rooted in what it is to be human, and there is a great deal of solidarity in recounting pieces of our past in a way that is both entertaining and meaningful. It’s about community, but more than just our immediate sphere. We also find that it makes our shop more approachable to the people who really enjoy that theme but don’t necessarily know much about coffee.” 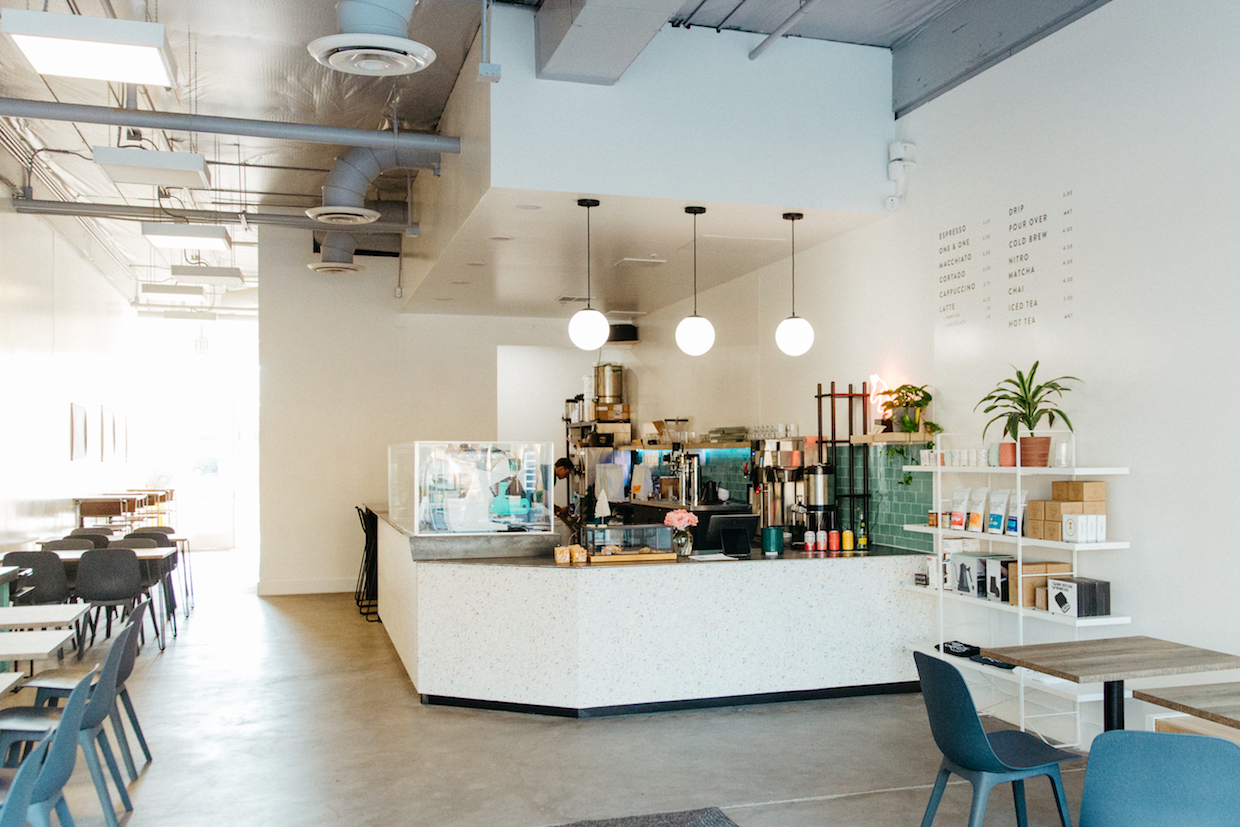 Mythical Coffee opened the doors to its coffee shop at the end of December. Sharing time on the Ikawa sample roaster and Probat P12 at Xanadu Coffee in Phoenix, the company roasts coffees that are assigned names drawn from world mythologies.

A bright, sunny Kenyan coffee released last year was called Wings of Icarus. In other cases, the reference can be a bit more on-the-nose. A uniquely sweet, fruitily complex bean from the Uraga district of Ethiopia was packaged as King Memnon, referencing a Greek mythological king of Ethiopia. 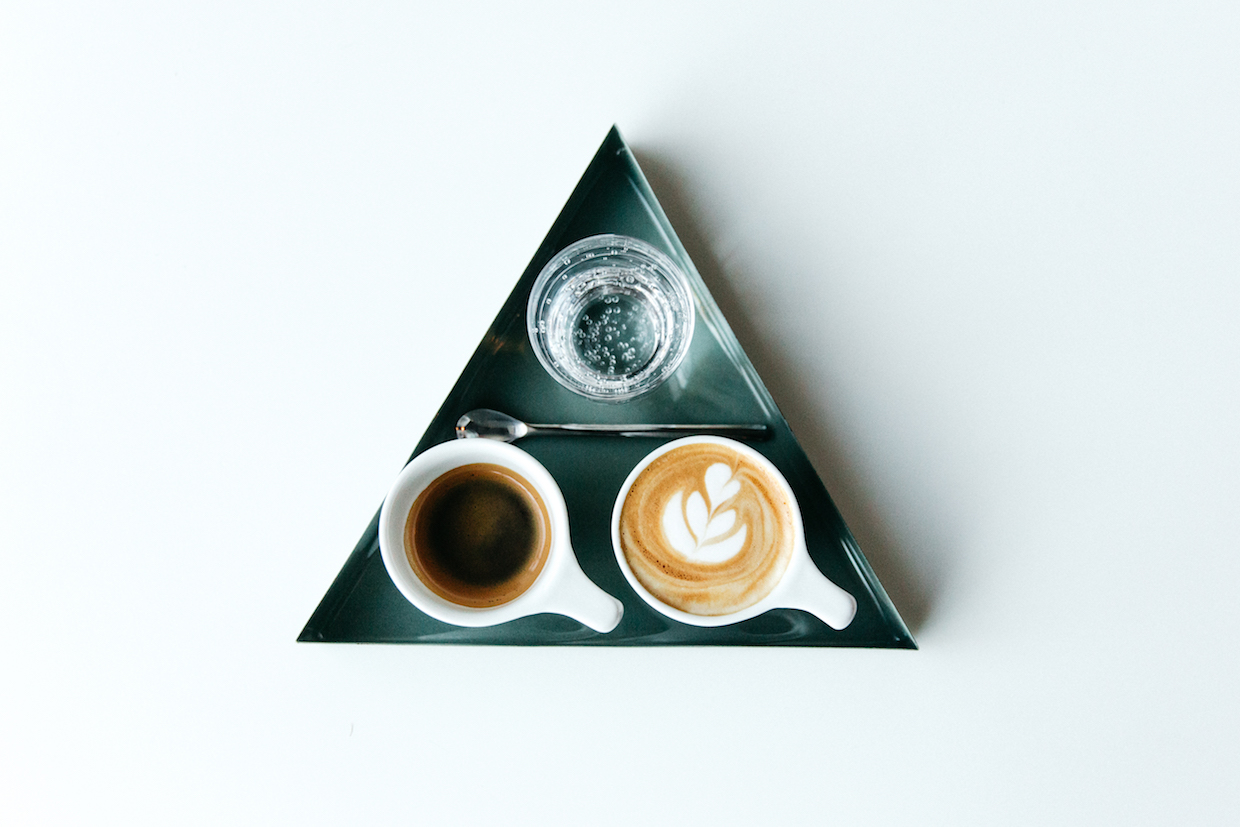 The brand so has so far delved into Greek, Norse and Japanese mythology, and is now learning more about the lore also in places where coffee is grown. Said Hervey, “[We have] started to look at our coffee’s origins to see what we can find that pays tribute to where they were cultivated.”

Baristas aim for drinks of legendary quality using a 2-group Synesso MVP Hydra machine that is named after a many-headed serpent from Greek mythology. It is paired with Nuova Simonelli grinders — Mythos 2, of course — while a Mahlkönig EK43 grinds for drip, including Fetco XTS batch brews and automated Marco SP9 single-cup pourovers. The fresh green tile on the wall behind adds a vivacious splash to an otherwise gleaming white 1,480-square-foot space. 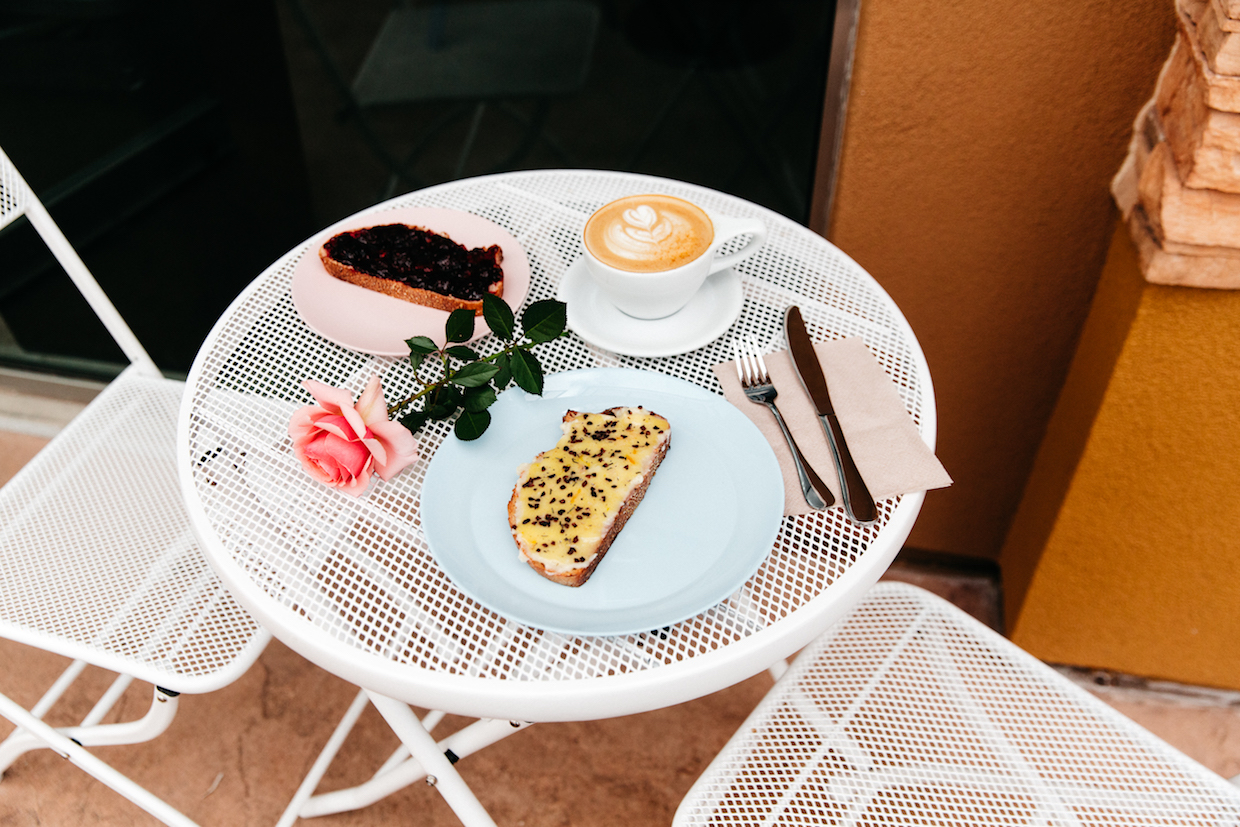 Mythical is also happy to dispel as many myths as possible where coffee is concerned. Educational programs are in development for wholesale clients, consumers and anyone else interested in the realities of sourcing, roasting and brewing. Efforts are also underway to include more origin info on each coffee’s online product page.

“We are excited to develop more education and possibly some content for coffee training, on both physical and digital platforms,” said Hervey. “We also have talked about how to more thoughtfully embrace giving credit to the many fantastic farmers, producers, and importers who make all of this possible for us.” 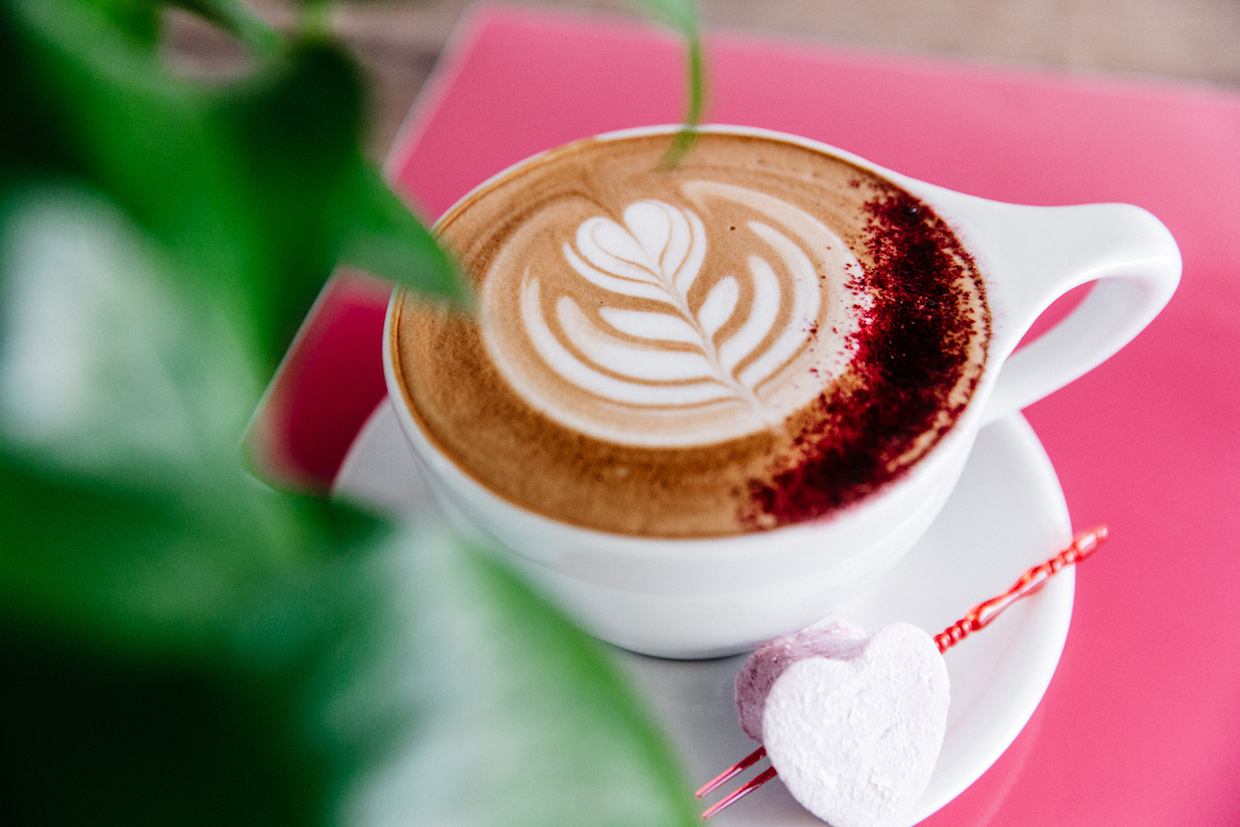 Co-founded in 2018 by former baristas Hervey and Katjriana Marker, Mythical Coffee continues to be a tightly knit team — one currently focused on the busy opening stretch for the cafe.

“We want to scale in a way that maintains our integrity,” said Hervey. “I hope that we can help open the way for specialty in a city that desperately wants quality coffee. We are really hoping to continue to improve steadily, and evolve into something deeply special and community-focused.” 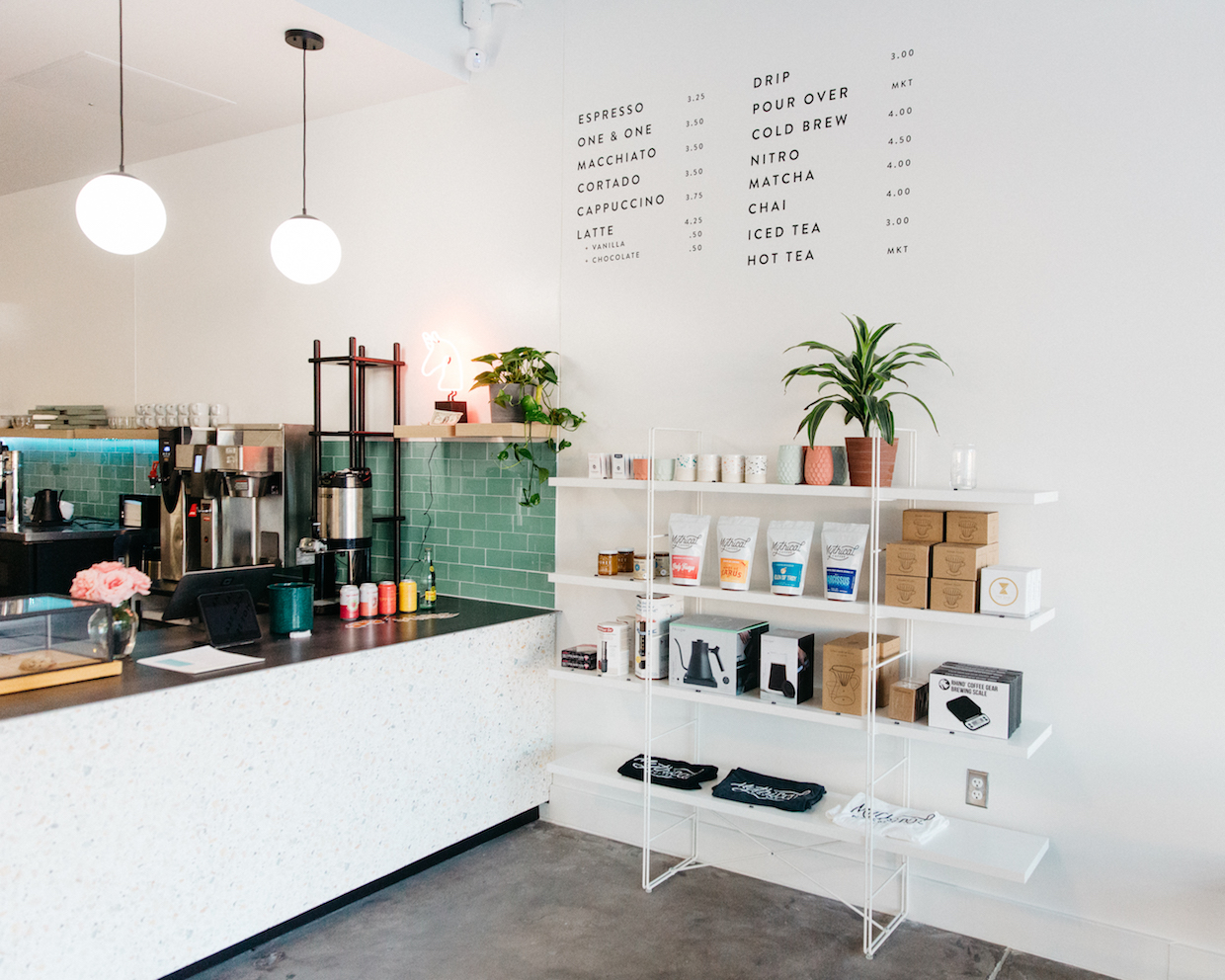 This is my new favorite coffee house in the Phoenix area. I found it by reading an article in the Arizona Republic in late January. My wife and I go after visiting the Gilbert Farmers Market on Saturday mornings. I like their pour over with single source specialty coffee beans. My wife likes their made from scratch, in house, vegan pastries.

Hmmmm. that’s a long ways away from the Pacific Northwet, but next time throughthere I shall stop by. I’ll also send the connexion to some good friends up in Tempe who love good coffee. Not far.

By the way, as a foirmer professional photographer, I must say this is one of the finest sets of images I’ve seen of any cafe presented in these pages. Composition, exposure, direction of the eye, colour rendition, innovation, every aspect of each image, and their cohesioin as a set, are impeccable, Well done. Wish we’d see much more of this quality. I figure if Katjriaina’s high standards in her photography work carries into her work with the coffee, it HAS to be great. Its a mind-set. Anyone who has it will apply it to anything to which they put their hand and heart.

Hmm.. WHEN can I get down that way again>