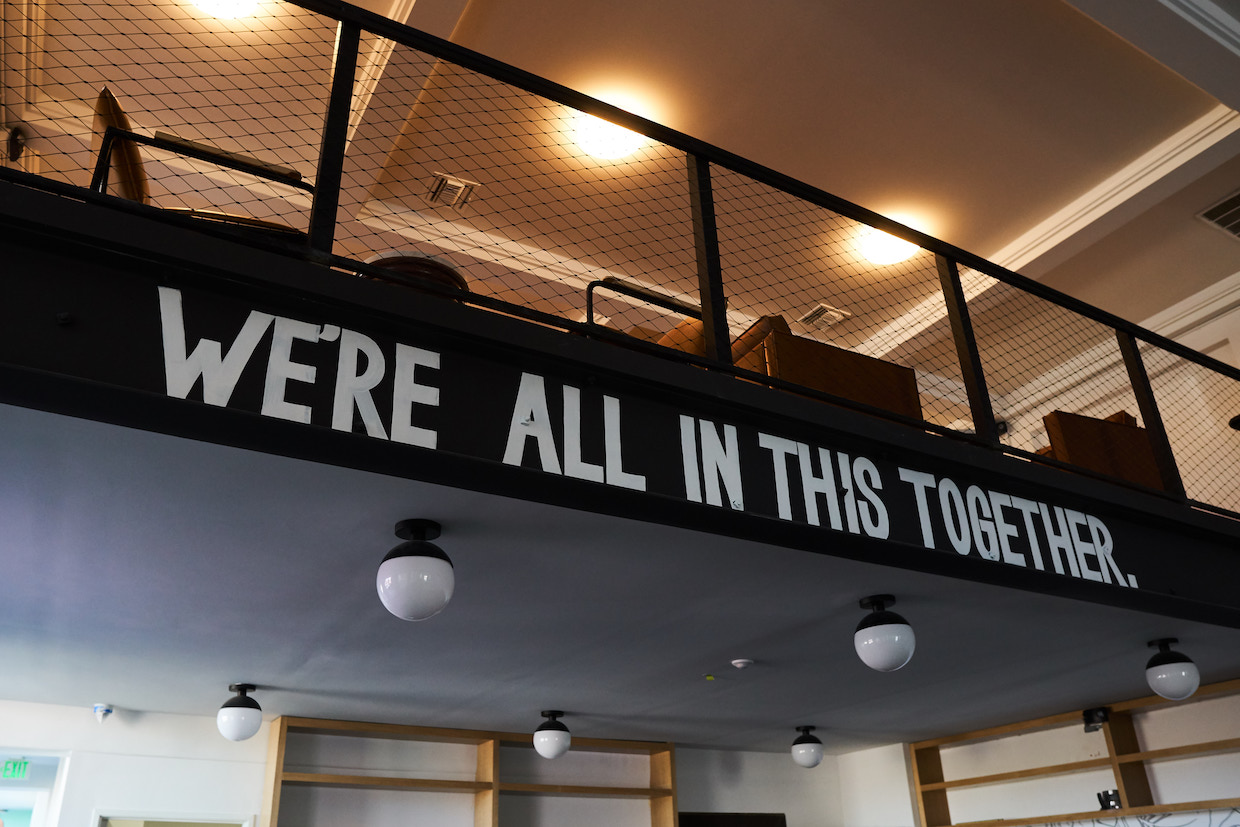 The “We’re All In This Together” message painted at the new Hilltop Coffee + Kitchen location in Inglewood. Photo by Justin Jamerson, courtesy of Hilltop.

Inspirational messages such as “We’re All In This Together” and “What A Time To Be Alive” painted throughout the second location of the Hilltop Coffee + Kitchen in Los Angeles have taken on new meaning since the shop opened late last year.

In Inglewood, the shop has managed to stay open throughout the ongoing coronavirus, serving customers through takeout and delivery, and maintaining the welcoming approach that owners Ajay Relan, Yonnie Hagos and new partner for the second shop, acclaimed actor Issa Rae, set out to create. 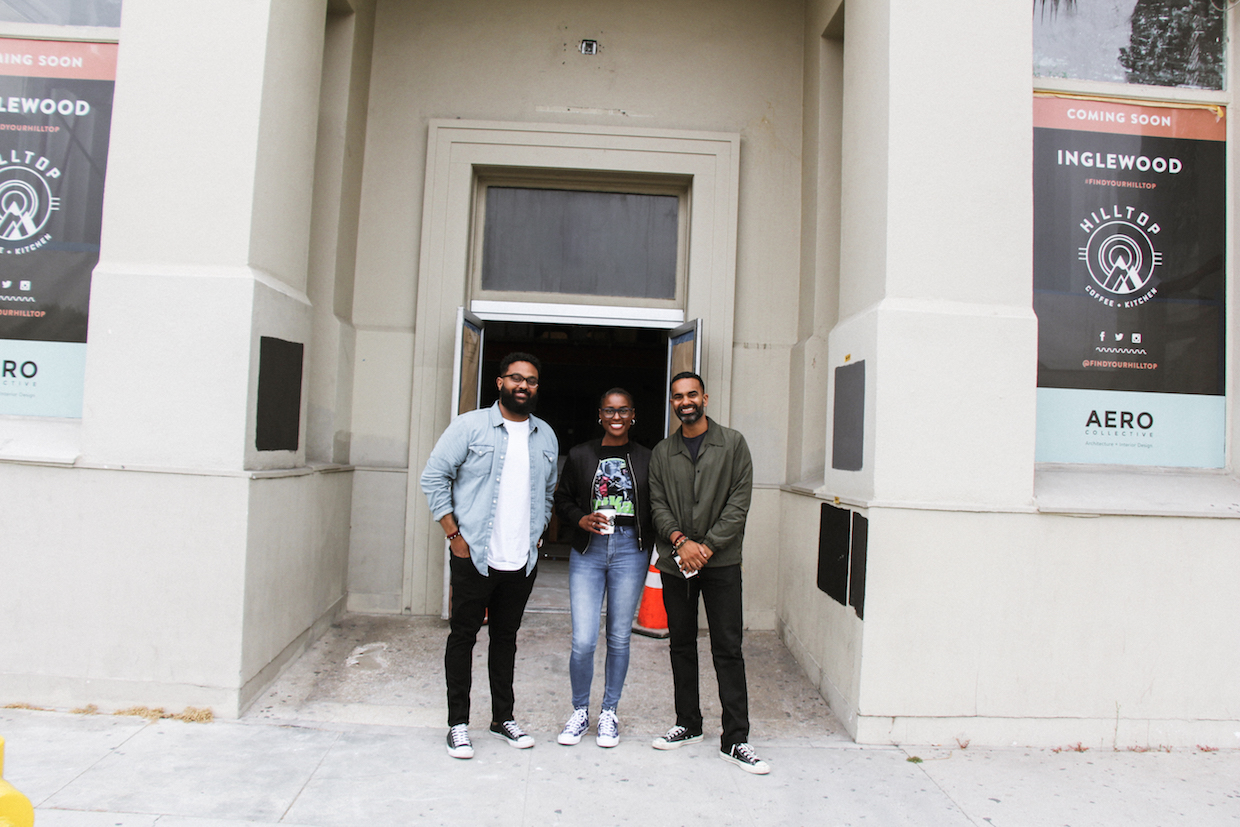 “We’re from the neighborhood and are very much a community-oriented business,” Hagos recently told Daily Coffee News. “That commitment has paid off in the love and support we’ve gotten from our neighbors, even as we face down a pandemic that’s disproportionately affecting communities of color like ours.”

The second shop follows the original Hilltop Cafe + Kitchen in the View Park-Windsor Hills neighborhood, which opened in 2018. All of the partners in the venture grew up in South Los Angeles, and the new shop is designed specifically to be “something modern but not pretentious,” as Relan described to DCN in a phone interview just prior to COVID-19 forcing shutdowns throughout the city. 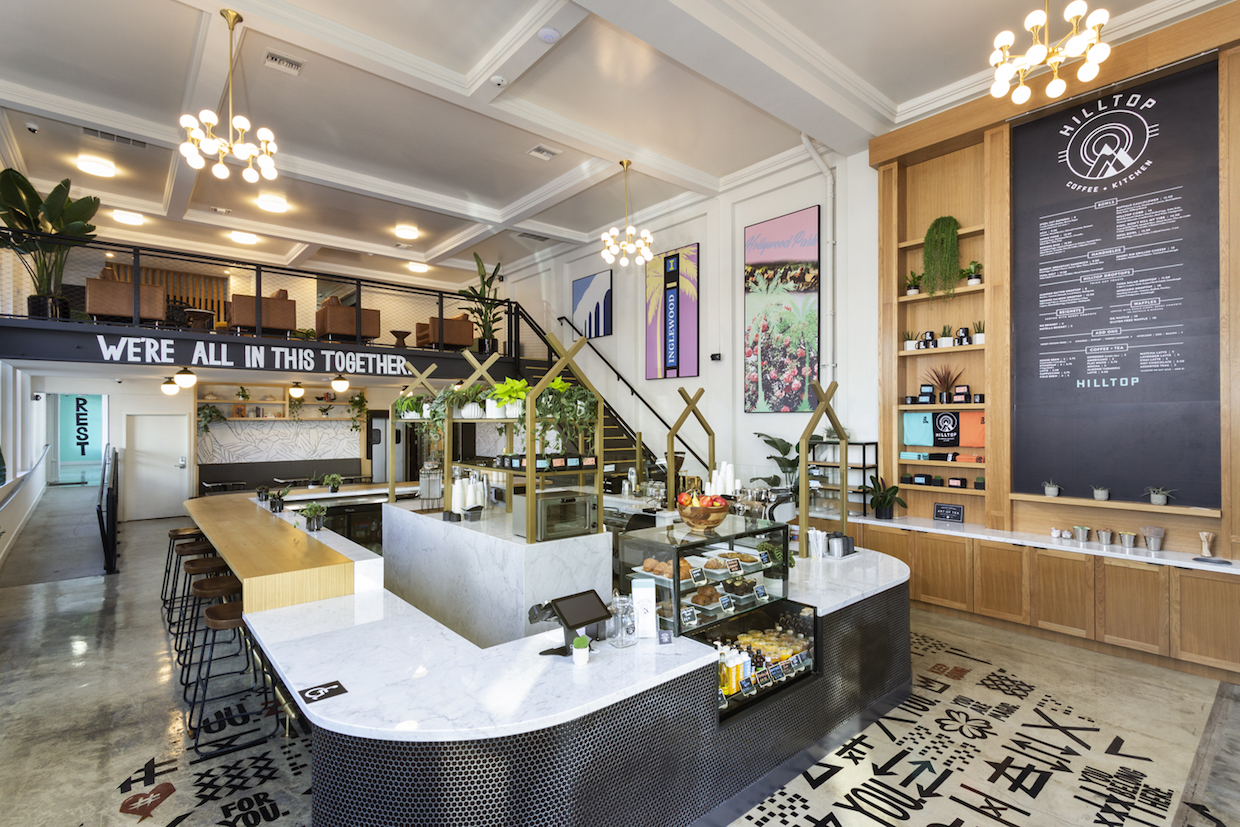 “We had a pretty clear vision of what we wanted,” said Relan, who along with Hagos formerly ran the popular L.A. bar The Parlor. “We basically had a cheat code of how to design it, because we know this area like the back of our hands.”

Hagos said that allowing indoor seating would have “flown directly in the face” of the company’s goal to maintain the health and safety of staff and guests alike, but when the new shop does fully open, customers will be greeted by a multi-colored entryway that leads to a long wraparound bar within a split-level open floor plan. 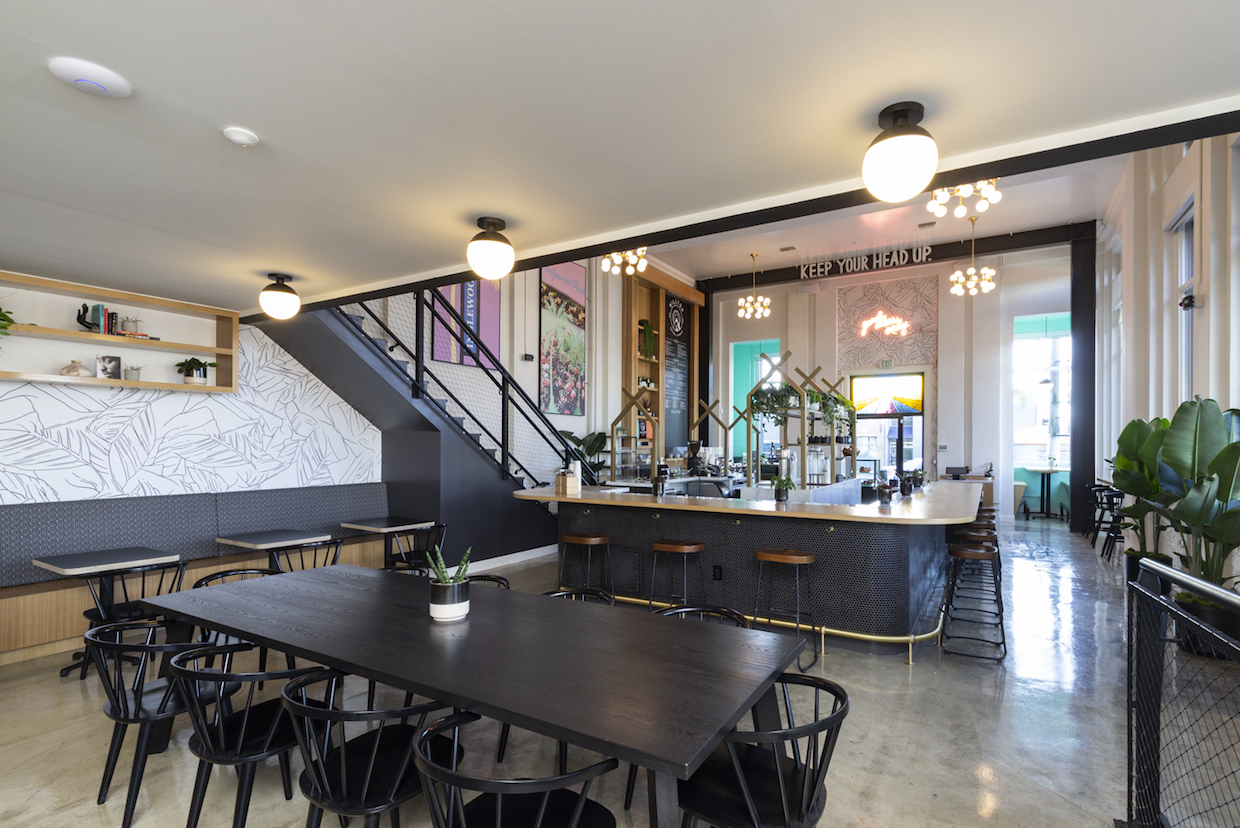 With beans and training provided by L.A. roaster Tectonic Coffee, Hilltop’s drink menu includes traditional espresso-based drink offerings, and at the time of this writing, an Ethiopia Yirgacheffe coffee was served as batch brew while a blend of coffees from Guatemala and Costa Rica comprised the espresso.

Specialty drinks such as the almond turmeric latte and the lavender latte are made with syrups prepared in-house. Hilltop has a full kitchen and offers a variety of breakfast and lunch items, including a selection of bowls, thick cut topped toasts called Hilltop Droptops, waffles, beignets, and sandwiches such as the Bangin’ Breakfast Sandwich (fried edd, cheddar, bacon, spicy mayo, brioche) and the Short Rib Grilled Cheese (cheddar, picked red onion, sourdough). 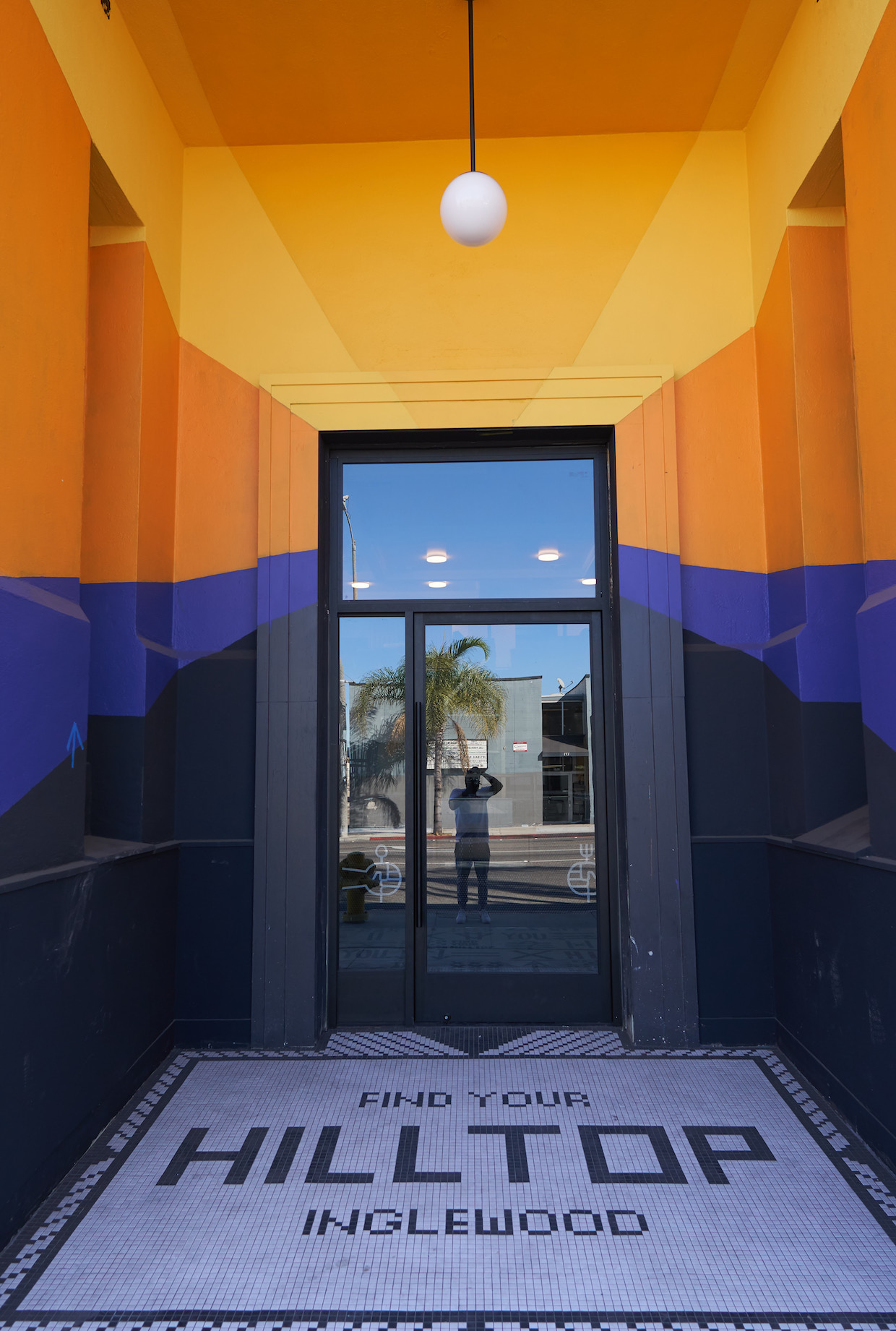 The Hilltop founders said they have a their eyes on a third location, in Eagle Rock. If that location comes to pass, patrons can expect a similar welcoming vibe.

“The idea of giving back, engaging the local community, and adding something cool to a neighborhood without changing the character of that neighborhood are fundamental to Hilltop,” said Relan. “We see trends that people want to eat and drink better and want better choices, and we wanted to provide all of that within the neighborhood.” 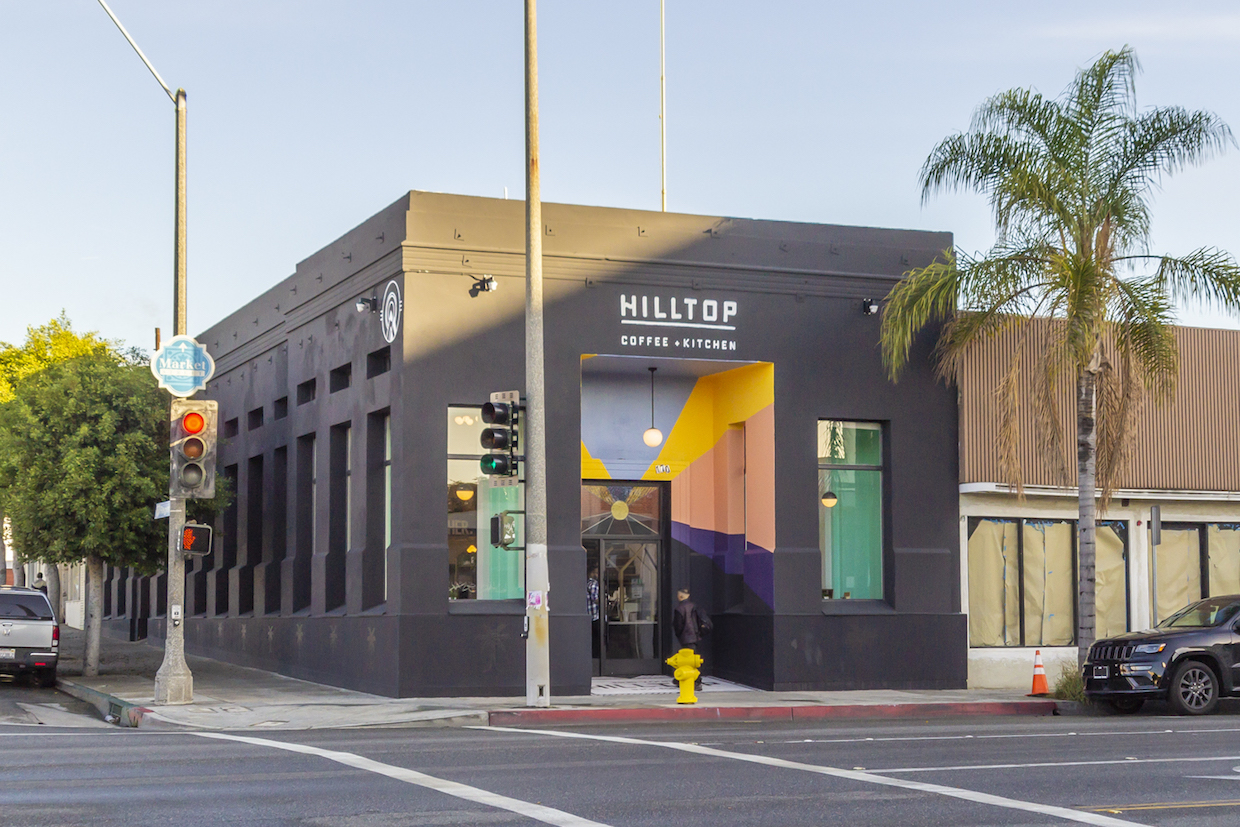 Congrats on a beautiful place! I am so thrilled to see this generation of roasters and cafes incorporating community and consciousness beyond the marketing. Go Hilltop! Climb that mountain!

I’m a coffee lover and to see our Sister & Brothers are making a different. Let me know when you go IPO.

I’m a coffee lover and to see our Sister & Brothers are making a different. Let me know when you go IPO.