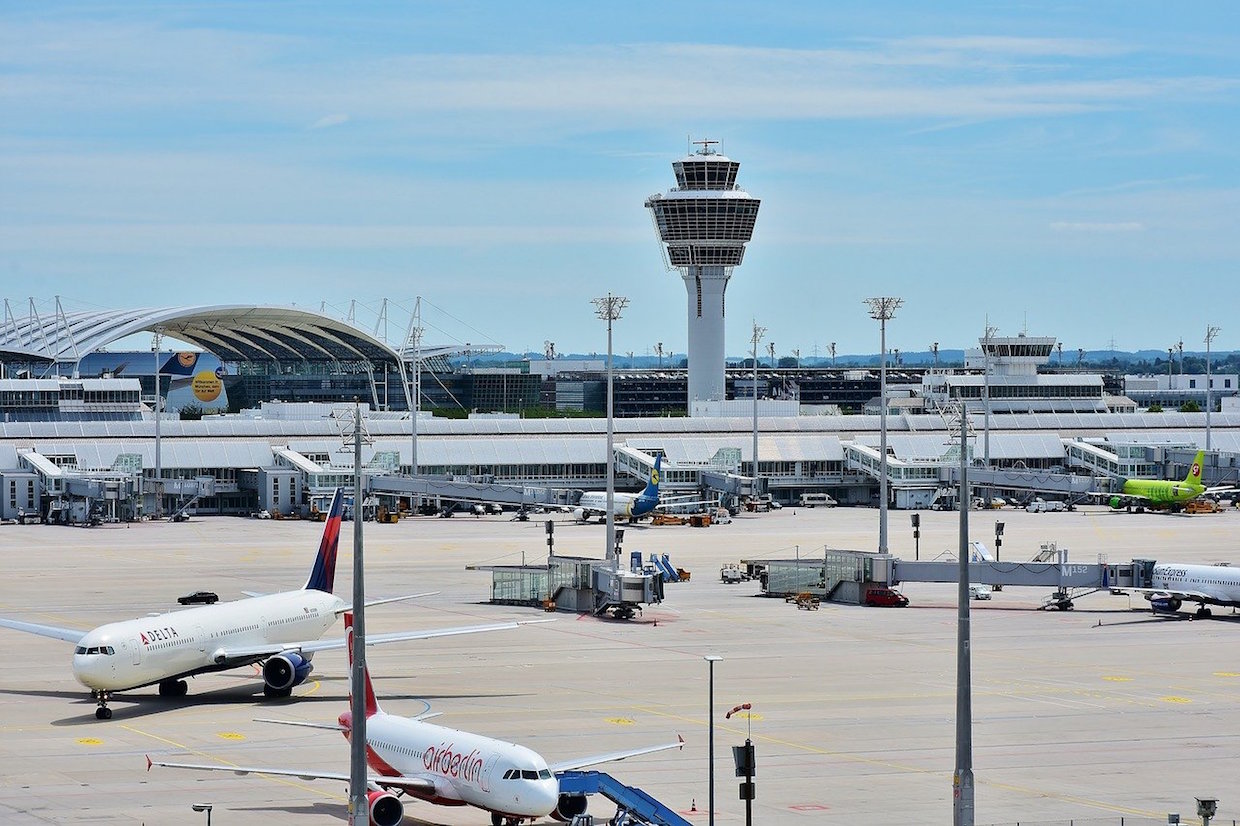 The Munich Airport in the Before Times.

Over the past year, coffee has become embroiled in a 16-year-old dispute over airline subsidies between the United States and several large European Union countries.

This week, at long last, it seems coffee has been largely rescued from this trade war, with the sole exception of packaged beans, grounds and solubles imported to the U.S. from Germany, with which still carry a hefty 25% tariff.

At the center of the dispute is the issue of government subsidies to the two companies that make 99% of the world’s commercial aircrafts: Boeing and Airbus.

Beginning in 1992, EU member countries had paid Airbus some €3.7 billion ($4.3 billion USD, by today’s exchange rate) in subsidies, receiving repayment in the amount of about €6 billion, which constitutes about 40% in royalties, minus inflation.

The U.S. has maintained for a decade and a half that these subsidies are illegal, and caused real harm to Boeing and the U.S. aerospace industry. Last October, the World Trade Organization sided with the U.S., allowing for $7.5 billion in tariffs on goods from France, Germany, Spain and the U.K. as retaliation.

Though coffee was not part of the original list of products to carry a 25% tariff, it was added in what DCN is calling the “fancy foods slap.” Along with some trucks and machinery, a list of proposed new items to carry a tariff included things like confectionary sugar, chocolate, olives, gin and, yes, coffee.

On Wednesday, the office of the United States Trade Representative (USTR) announced that it had amended the list of goods to be tariffed, mercifully omitting coffee from the list, much to the delight of coffee industry representatives in the U.S., U.K., France and Spain.

“Today, we’re pleased to announce that due in no small part to our collective industry action objecting to these harmful proposals, coffee has been largely spared from the U.S. Trade Representative (USTR)’s updated list of products subject to these retaliatory tariffs,” the U.S. National Coffee Association President and CEO Bill Murray wrote in an alert to NCA members yesterday. “On behalf of the NCA, thank you for joining us in voicing your opposition to these harmful tariffs. As always, we will continue to monitor the situation and keep you updated with any new developments.”

Not so pleased was Germany, which for whatever reason was the only country for which coffee is now subject to a 25% tariff upon import to the U.S. The rule applies to roasted caffeinated coffee, roasted decaffeinated coffee, and instant coffee.

In a written statement to Reuters, German Coffee Association Director Johannes Hielscher expressed relief that the U.S. had spared the rest of Europe from the coffee tariffs, yet also asked for the U.S. to remove whichever special coffee tariffs “still exist” — in short, the ones on Germany.

Unfortunately, this is not the end of the story, and coffee may well be dragged back into the cross-Atlantic drama.

The WTO has also ruled that illegal subsidies paid by the U.S. to Boeing were not properly addressed, and an arbitration ruling on that judgement is expected in the coming weeks. That means the EU may have the rights to slap its own retaliatory tariffs on U.S. goods.

“In the absence of a settlement, the EU will be ready to fully avail itself of its own sanction rights,” EU Commissioner for Trade Phil Hogan said in a recent statement. “The WTO will soon issue its arbitration decision in the parallel case of the EU against the United States on certain unlawful subsidies to Boeing, where the Appellate Body had found the US to be in breach of its WTO obligations.”

Let’s hope they leave coffee out of it.