The ban outlaws sugary drinks that are 16 ounces or greater, although there is nothing that bans consumers from adding their own sugar at a condiment stand. Naturally, some of the biggest opponents of the ban are large chains like Starbucks and Dunkin’ Donuts, which have numerous “large” and “venti” items that are filled with cane sugar and syrups.

Drinks that are 50 percent or more composed of milk are exempt from the ban, as the city has identified milk as a positive source of nutrition. So what to make of something like a Starbucks Frappucinno, which combines a mixed formula packed with sugar and milk with ice? A piece published yesterday by the New York Times points out some of the confusions the ban is creating for sellers:

Given some coffee sellers’ uncertainty over how much sugar and milk is in their drinks, however, compliance can be a tricky game. And different companies appear to be interpreting the added-sugar rules differently, perhaps to circumvent a predictable kink in the morning-coffee routine: As baristas ponder how many packets of sugar are allowed in different cup sizes, the line of frustrated customers will no doubt grow.

“We believe that the majority of our products fall outside of the ban given the ability of our customers to customize their beverage,” Starbucks said in a statement to Yahoo News. “As there is still ongoing litigation regarding the regulation, we’re not making any immediate changes at this time. We are evaluating which changes we may need to make to our recipes and product offerings and will be using this three-month evaluation period to make the appropriate changes for our customers and to fully comply with the new beverage restrictions.”

Dunkin’, meanwhile, is playing a little nicer, passing out fliers to patrons to let them know how the new rules may affect their experience: 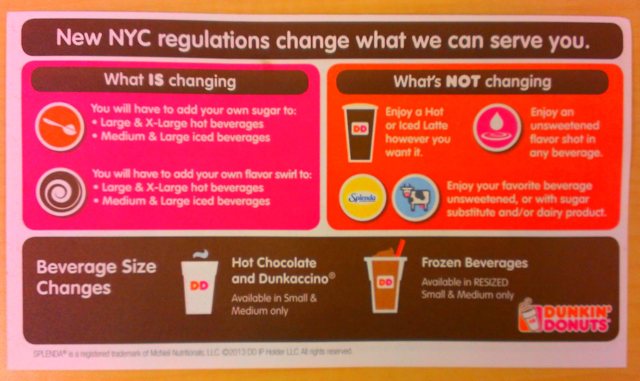 Small coffee shops, of course, will also be affected by the ban, although fewer of them tend to hang their hats on the equivalent of coffee Big Gulps. Here’s more on that from the Times:

Independent coffee shops have not been immune. At Café Angelique in the West Village, Robert McConkey, the manager, said he had to eliminate most large sizes of cold drinks from the menu. Large flavored ice coffees posed a special problem because of the sugar in the flavored syrup. The cafe decided to continue selling them, but only with the syrup on the side.

“The way the law is worded, there’s plenty of ways for us to get around a lot of them,” he said. “It just seems so ridiculous.”