The New Taster’s Flavor Wheel: A Recalibration of Coffee Dialogue 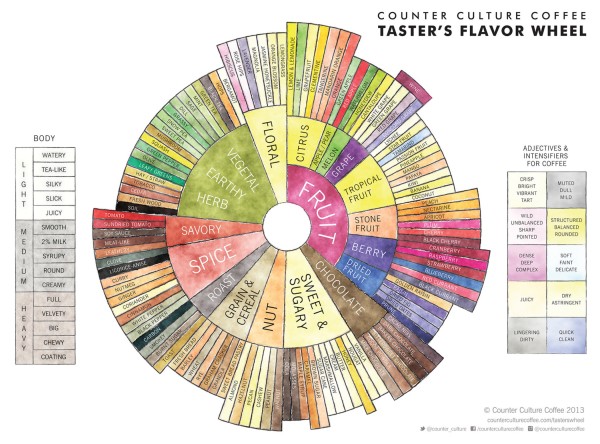 Since its creation 18 years ago, the Specialty Coffee Association of America’s Coffee Taster’s Flavor Wheel has become a ubiquitous tool, hanging in frames in cupping areas throughout the country. Now Counter Culture Coffee has created its own version of the wheel, one Counter Culture Coffee Buyer and Quality Manager Timothy Hill hopes will help move the industry forward in terms of sensory dialogue.

“It is very scientific, and there is part genius to it, but it doesn’t make for the most intuitive application,” Hill says of the 1995 wheel. “We wanted this new wheel to be intuitive, maybe a little more hand-crafted.  We tried to list the descriptors of coffee that come up fairly frequently in actual tastings. Not all of the descriptors fit perfectly, but hopefully the categories make sense and the descriptors in them flow together.”

In conversation, Hill continuously makes reference to the notion of coffee education through intuition, which he says can get lost in some of the complex, science-driven forms often used in coffee evaluation. Hill and others in CC’s coffee department even tried to make the look of the new wheels — one for positive characteristics and one for faults — more hand-crafted, with hand-filled colors and hand-written descriptors. 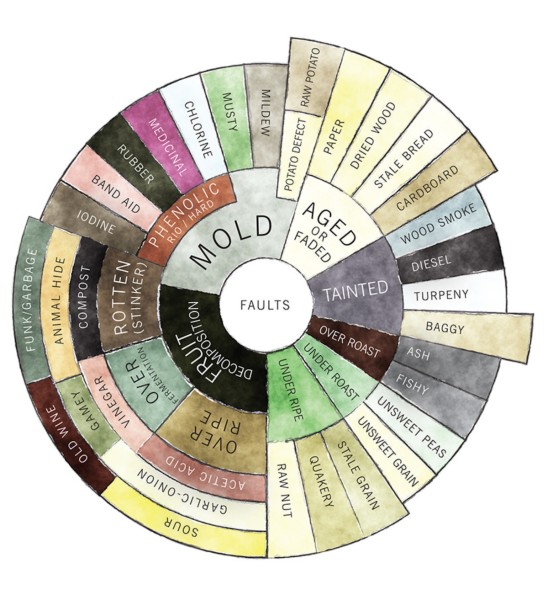 “We want everything to be hard science,” Hill says of the industry. “We want forms, hard forms to score coffee — and man, they get really complex, complex to the point that even me as someone who evaluates coffee as part of my job hates using them.”

When developing the wheels, Hill says he and the CC coffee team considered common descriptors used in-house, as well as others being used by roasters throughout the country. The goal he says, is to have the wheels be living, breathing documents that can change over time and keep pace with tasting trends, not only in coffee but in other industries such as wine and spirits, where Hill suggests industry-wide tasting calibration is more developed than it has been in coffee.

“I recently saw a bag from a roaster with of coffee from Indonesia, and it had all these descriptors that I would commonly associate with coffees from Ethiopia,” Hill says. “I felt bad. If there isn’t some calibration going on in the industry with a lot of attention to correct descriptions of the flavors, where are consumers going to be?”

Hill says these kinds of misjudgments on the parts of some coffee roasters illustrate how far coffee is behind other industries, using wine as an example. Says Hill, “I don’t want to buy a cabernet with peach notes and crispness that I would associate with a riesling.”

That said, Hill wants you to criticize the Counter Culture wheel, too. Since it was released two weeks ago for free on the company’s website, there have already been more than 4,000 downloads of the high-res versions of the taster’s flavor wheels, and Hill says the feedback has been extremely positive.

Along with the wheel downloads, Counter Culture provides an email response form, where Hill encourages coffee professionals to pose questions or make suggestions, all with the hopes of making the wheels a useful industry resource. “We’re not trying to make money on this thing,” Hill says. “We want roasters to actually be able to use it.”