Is the United States Ready for Cat Cafes Right Meow? 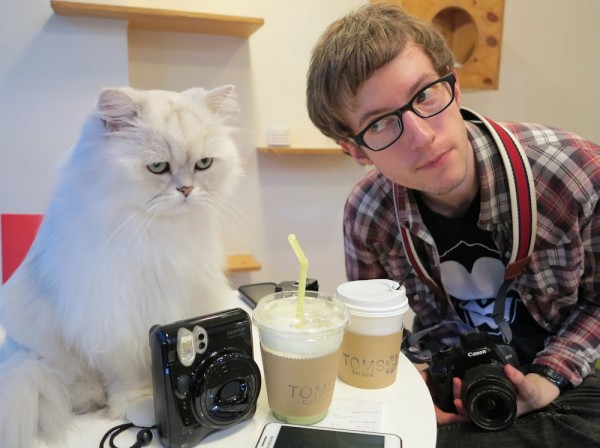 Cats and coffee, a match made popular in Japan, may be coming to the United States. A pair of entrepreneurs in San Francisco hope to this year open KitTea (get it?), a cat cafe with equal emphasis on a drinks program to social interaction with free-roaming felines.

The cat cafe concept has taken off in Japan since it was introduced in Osaka 10 years ago, and there are now some 40 cat cafes in the country, with a handful of others throughout other parts of Asia and Europe. On the cutting edge, some Japanese entrepreneurs have now introduced rabbit cafes.

If realized, KitTea would be the first full-fledged cat cafe in a a major American city, providing what owners Courtney Hatt (a former barista) and David Braginsky (a software developer) describe as “cat and human oasis.” The pair have yet to lock down a location, but they hope to open this year in a 1,600-square-foot-minimum space following a crowdfunding campaign. The space would allow for a comfortable and safe environment for 10 cats — coming from rescue organizations — and about 30-35 people. With space limited by cat welfare, the owners plan to use a reservation system for human guests.

So, why a cat cafe? Here’s why, from Hatt and Braginsky:

Cat cafes are a hit in Japan and parts of Europe, in part because the majority of apartments do not allow furry companions.  Of course the inherent awesomeness of cats probably also plays a role: they’re elegant,  cute, therapeutic, and goofy, somehow all at the same time.

As Courtney looked around the cafe, she became overwhelmed with its buzzing and frenetic energy. Though everyone was sitting in close quarters, there were no spontaneous interactions with others and it lacked comfort, relaxation and socialization.

That’s when it hit her that a cat cafe would be a natural addition to the eclectic culture of San Francisco.

The Dog and cat cafes are a hit in Korea as well. The biggest challenge is the smell. The biggest complaint that most patrons have is that the smell takes away from the coffee experience. Otherwise they are great.

What they do here in Korea is you pay a set fee around $5 and you get a coffee or something with that fee. Then you can spend as much time as you want playing with the animals. This is particularly great as most families do not have any pets and it really teaches child (who mostly frequent these cafes in Korea) about the proper treatment of animals.

Sounds like a blast. Dodging puke bombs, have scalding hot mugs of liquid get knocked into your lap, customers clawed. Fun fun fun.