Farmworkers Left Behind: The Human Cost of Coffee Production

In general, coffee pickers, migrant workers and farmworkers are the most vulnerable groups involved in coffee production. Moreover, they have traditionally not been included in the coffee industry’s sustainability efforts.

Over the past few years, I have visited coffee farms all over the world in order to meet with coffee pickers and other farmworkers interested in participating in Fair Trade. They have expressed to me numerous existing challenges with their work. Following are some of the most common:

On several farms, especially in Central America, migrant workers face precarious housing conditions when they live on coffee farms with their families during harvest. There are many large, one-room warehouse-type constructions where 40-60 farmworkers and their families live with little access to mattresses, blankets, privacy or security.  Workers often have to use limited number of latrines or the coffee fields as toilets, and must shower in the nearby rivers. Privacy, safety/security, and sanitation are not often found in migrant workers’ housing during the harvest. Many workers I have talked to in Central America and Colombia identified housing conditions as the most important issue they would like to see improved. 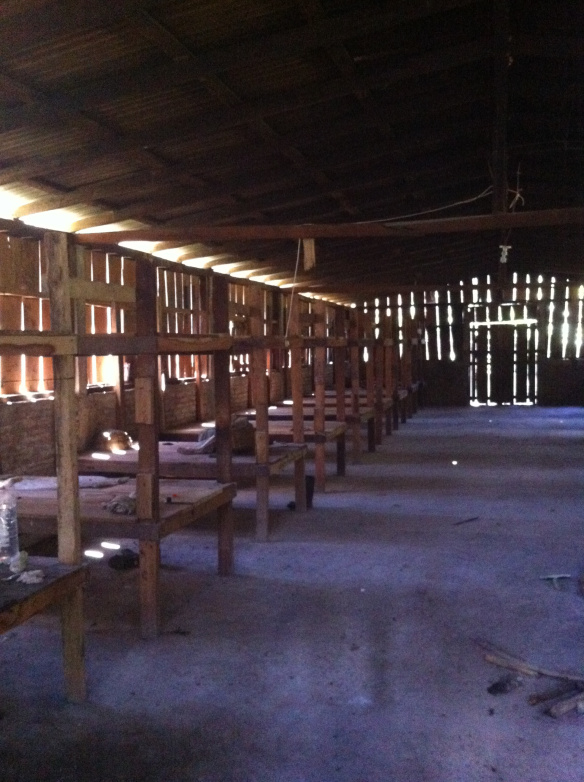 An example of farmworker housing in Central America, where men, women and children may live for three months.

Farmworkers commonly face unsafe working conditions in coffee fields. For example, not having the right protection equipment for work is very common, especially outside of Brazil. Having to bring your own rain boots, improvised ponchos (using plastic bags), and even your own machetes is very common. In coffee fields where you can find snakes, spiders or fire ants in many places, not having the right equipment can be a tremendous hazard for workers. In addition, not having the adequate training and protection when applying pesticides is a major challenge for farmworkers. I visited a coffee farm in Brazil where workers had been properly trained in pesticide application and had all the right equipment.  A few of these workers told me that applying pesticides was the worst part of the job. Even when you have the right training and equipment, pesticide application involves significant risks to the workers’ health. Not having the necessary individual protection equipment and training creates very hazardous situations for farmworkers in coffee.

In many countries, workers do not have a signed contract they can use to make sure they receive the right payment for their labor. This leaves the door open to employers to take advantage of workers. Low wages are also a big problem in many countries. During the harvest, coffee pickers get paid for how much coffee they pick. Coffee pickers can make as little as 2-3 dollars per day in places such as Nicaragua (even though the minimum wage is, in theory, close to US$6). PROMECAFE estimates that due to coffee production losses from leaf rust, more than 370,000 coffee jobs were lost in the last harvest in several countries in Central America and the Caribbean. This number could double for the harvest beginning in December of this year. Lower demand for coffee pickers due to coffee leaf rust may increase the migration of workers to cities and to other countries looking for jobs.

Children in the Fields

All over the world in coffee countries, the occurrence of children working on the farm during harvest is unfortunately common. The ENTERATE project and the International Initiative to End Child Labor report that “on coffee plantations [in Nicaragua], child and adolescent workers have very little voice, are provided with little or no compensation, and face a range of other rights violations.” In particular, “during harvesting season, working children represent an abundant and easily exploited source of cheap labor and contribute to the decline of wages. To meet a daily production quota in order to receive their meager wages, workers on some farms are forced to bring their children to work with them.”According to Oxfam, in Kenya, it is estimated that 30% of the coffee pickers serving plantations are below the age of 15.

The solution to these issues needs to involve the coffee industry and consumers. Producing sustainable coffee is not cheap. We all need to be part of the solution. For coffee farmers, improving these issues necessitates significant investments. Many of the farmers who have allowed me to learn from farmworkers on their farms want to improve these working conditions. However, the currently low coffee prices create an additional obstacle.

Over the next months, I will be gathering much more information from coffee farmworkers to understand how Fair Trade could play a role in improving their situations and their communities.  I hope this helps to inform alternatives to the existing situation of farmworkers in coffee and to bring awareness of this important issue to the coffee industry and consumers.

Miguel Zamora
Miguel Zamora is the Head of the Americas Region for UTZ. His work supports coffee farmers and the industry to make sustainable farming the norm. He is a member of the Advisory Councils of the Sustainable Coffee Challenge and the Sustainability Center of the SCA.

Well some is right but some is not that right, not sure if the author is Miguel former FT US member and seems its looking to justify the purchase of certifications, sometimes not that “fair”. I’ve been in the coffee industry since 15 yrs and my family has been on this world for more than 200 yrs; so I believe there are issues like these but not as severe the author wants to make it think.

And there are countless roasters worldwide (specially in the US) concerned about this and many countries including in their laws protection to workers, environment, etc.

I am also concerned of some producing regions but they are not forgotten, there are lots of NGO’s, Govs, exporters, importers and roasters on the loop to avoid these situations; which I believe the author seemed to present as a very drastic situation, like if no company, government or similar is working on.

The other thing I would add is that if you click on the links included in the post (in blue) you will see that a lot of the information presented actually comes from work done by local NGO’s and governmental organizations that are saying the same thing: the situation of farmworkers in coffee is very difficult and issues of low wages, unsafe working conditions and child labor are relatively common.

I think, however, that we could work together to change that reality and I hope we will have a chance to work on this.
miguel

Do you know on average how many pounds of coffee a harvester can pick per day? I’m working on a research paper about the conditions of coffee harvesters.

Hello Noah, it differs a lot from one farm to another, and more from one region or country to another, even though it differs among the harvest season (remember it behaves like a Gauss bell); so a good average I would say that 1 (one) good picker can easily harvest around 400 kg (aprox 880 lbs) in one day (usually from 6 a.m. to 2 p.m.).

Some countries, like Costa Rica, have strict laws and regulations where you must pay pickers no less than $2 or $2.5 per every 13 kg (aprox 30 lbs) called “cajuelas”; called “latas” in Nicaragua en so on for each country, where they handle different weights. This meaning:

Please consider the following:
– Families are usually composed by 2 – 4 pickers
– Pickers usually move from one farm to another, they are not perm workers
– For more than 80% (I would say) of farms, the picker is the same owner and his family.
– Most producing countries shamely do not have minimun wage for pickers; some in the past even payed workers with food.
– Some other countries pay less than $0.05 cts per kg…
– The above is for Costa Rica.

Hope it helps! And willing to see more comments from other parts of the world.

Could another “human cost” be the sterilization of harvest workers to help curb the child labor issues? I have heard this is a practice but I have not found any research. Do you have any information?

How about the human cost of the cream that goes in those cups of coffee. I grew up a child laborer on a dairy in Wisconsin. At age ten years old, we worked from seven am to nine pm, six days a week. We had every other Sunday afternoon off. Going to grade school was considered vacation time and was allowed. We even had children in diapers working in the fields. We had two children face suicide over these harsh working conditions; one almost died. We were paid $30.00 per month at eight to twelve years old. Child workers at the ages of fifteen to eighteen were paid $70.00 per month. I think that when looking at exploiting children for cheap labor, no one does it better than the American Family Farmer.

I am also concerned of some producing regions but they are not forgotten, there are lots of NGO’s, Govs, exporters, importers and roasters on the loop to avoid these situations; which I believe the author seemed to present as a very drastic situation, like if no company, government or similar is working on.
Read more at gel bôi trơn

t differs a lot from one farm to another, and more from one region or country to another, even though it differs among the harvest season (remember it behaves like a Gauss bell); so a good average I would say that 1 (one) good picker can easily harvest around 400 kg (aprox 880 lbs) in one day (usually from 6 a.m. to 2 p.m.).
Read more at happyluke

We have just come home from Costa Rica (Nov, 2019) where we drove through the coffee-growing region outside San Jose. This is where Starbucks has there large research centre and most premuim Costa Rican coffee is grown. Many coffee growers are migrant Nicaraguans escaping the devastating violence in their home communities. They are living in dilapidated homes with no plumbing so sewer runs down channels next to roads. Children are shoeless and emaciated, families live with 30 people in homes with only outdoor cooking stoves that they need to scavenge for firewood for. If coffee pickers were paid the$1,200 amounts given above the would not be living in such extreme poverty. Coffee is generally grown with a coperative processing coffee from many farms. These farms are not industrial large plantations, but small farms and labourers are trucked between farms to pick- coffee doens’t all ripen at once on a bush so requires multiple pickings to be picked. Perhaps the bus transportation takes most of their incomes? Starbucks seems horribly dishonest when they portray their coffee as Fair Trade. Csta Ria has a strong safety net with exellent health care and education, but it is not reaching farm workers particularly Nicaraguans whose large numbers are overwhelming some social service agencies and public opinion and support is moving away from helping these groups so their condtions may worsen.

Is there any research you’re familiar with that is done in South Africa about the average wage of the coffee pickers there?

sanitation are not often found in migrant workers’ housing during the harvest. Many workers I have talked to in Central America and Colombia identified housing conditions as the most important issue they would like to see improved.
Read more at day noi mi

oeless and emaciated, families live with 30 people in homes with only outdoor cooking stoves that they need to scavenge for firewood for. If coffee pickers were paid the$1,200 amounts given above the would not be living in such extreme poverty. Coffee is generally grown with a coperative processing co