Starbucks to Pay Baristas’ Tuitions, But There Are Strings Attached 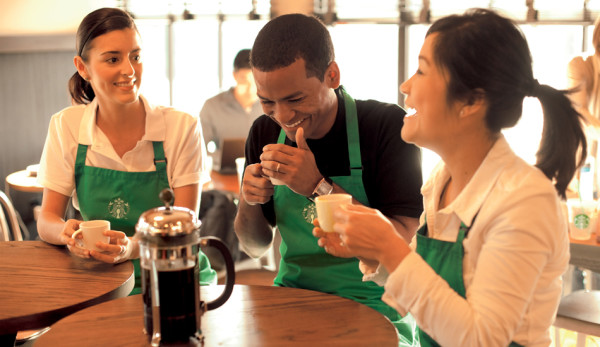 The Starbucks College Achievement Plan is available to any “partners” working 20 hours or more per week.

In one of the company’s biggest press barrages to date, Starbucks yesterday announced a partnership plan with Arizona State University that will reimburse college students for tuition expenses.

The Starbucks PR team has been hard at work promoting the plan as an innovative and monumental step toward corporate responsibility and the success of Starbucks employees, giving out dozens of interviews — including Chairman and CEO Howard Schultz on the Daily Show with Jon Stewart last night — and getting vocal support from the likes of President Obama and US Education Secretary Arne Duncan.

Before we get into the fine print, here are some of the main points of the Starbucks College Achievement Plan:

“There’s no doubt, the inequality within the country has created a situation where many Americans are being left behind. The question for all of us is, should we accept that, or should we try and do something about it,” Schultz said in a prepared announcement of the program. “Supporting our partners’ ambitions is the very best investment Starbucks can make.”

(related: After Starbucks Cease and Desist, Micro Brewer Not Giving Up Without a Laugh)

The program will be available to a huge pool of employees — there are some 135,000 in the United States that currently meet the 20-hour per week threshold, and Starbucks says only about a quarter of those people have college degrees, while 70 percent of them are currently enrolled in college or aspire to enroll.

While the overwhelming response to the Starbucks announcement has been applause — from mainstream media sources and corporate leaders alike — the education community has been much more critical, suggesting the plan could eventually result in increased debt and a lower-quality education for many employees.

In an interview with MSNBC, Sara Goldrick-Rab, professor of educational policy studies and sociology at the University of Wisconsin-Madison, described the joint venture between the two profit-hungry organizations as “extremely problematic:”

“ASU Online is a profit venture,” said Goldrick-Rab. “And basically, these two businesses have gotten together and created a monopoly on college ventures for Starbucks employees.”

Goldrick-Rab also cited research that suggests online higher education, despite its primary benefit of access, can leave low-income and underprepared students with a poor education from a far-from-ideal education environment.

Another critique of the plan surrounds a caveat — one not mentioned in any of Starbucks’ dozens of informational announcements about the program — that reimbursements will be given to employees only after they have earned 21 credits. The reimbursements would then be cyclical, requiring 21 more credits each time. One online credit at Arizona State typically costs between $460 and $540. At $500 per credit, it would cost the student — through some combination of grants and out-of-pocket expenses — $10,500 to reach the reimbursement threshold.

In a critique of the plan, education, education policy analyst Rachel Fishman of the New America Foundation wrote:

This 21-credit policy also brings up a lot of questions. This is almost two semesters worth of credit. A lot can happen over two semesters. What happens if a student suddenly falls below the 20 hours a week required to remain eligible? Given the shift nature of Starbucks employment, it seems possible that the student’s work situation could suddenly change. Also, what happens if an employee is let go? Furthermore, if a student works 20+ hours a week and is also a full-time student it can be difficult for them to succeed. Given the upfront cost, it pushes a lot of risk onto the student.

In a similar critique, Libby Nelson at Vox says the plan appears to be designed for “college dropouts,” while offering many of the same pitfalls that have led lower-income students with thin budgets and stretched time to drop out of college in the first place. She writes:

The tuition program is less generous than many headlines imply. Employees will still face big hurdles on their way to a degree. If Starbucks is going to make a difference, though, it will be for a crucial group: those who have tried — and failed — to complete college before.

Only time will tell how well the program will benefit Starbucks and its employees, but the company deserves praise for taking this bold step. The system may not prove perfect, but it does at least present an option for baristas and other hourly employees whose career options in the coffee industry are naturally limited.

Despite the concerns raised in this article, no other corporation is doing anything even close to this for people in the retail/restaurant sector. Applause deserved indeed.

But, since it IS kind of a rip-off for Starbucks employees, as mentioned in this article, let’s hold off on that applause, yeah?

Pimping their own employees to an overpriced online course is hardly commendable lolol if they were for real they would honor an education at any institution.