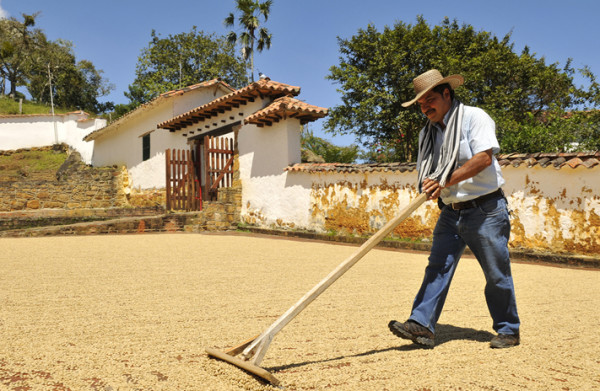 Nespresso owner Nestle stopped reporting the brand’s sales figures in 2011, but it is widely regarded as Europe’s biggest capsule system brand, and this is certainly one of the largest corporate investments in in-house environmental and social programs the coffee world has ever seen.

The plan, called The Positive Cup, will see investments in reducing the environmental impact from Nespresso’s own manufacturing operations, as well as long-term investments in farm-level operations and farmer welfare programs throughout the company’s supply chain.

“Today, we set our ambition of providing the highest quality and most sustainable portioned coffee worldwide,” Jean-Marc Duvoisin, CEO of Nestlé Nespresso, said in yesterday’s announcement. “The development of even more innovative programs with our partners further demonstrates our commitment to creating shared value and generating positive impacts for all stakeholders across the entire value chain.”

A large part of Nespresso’s investment is going toward a sustainable development fund, which will be use to work toward numerous six-year sourcing and social welfare goals. By 2020, the company hopes to source 100 percent of its Grand Cru coffees from its existing in-house AAA Sustainable Quality program, which the company developed in coordination with the Rainforest Alliance in 2003. By comparison, 84 percent of Nespresso’s coffee in 2013 fell under the AAA program, which has grown to affect some 62,000 farmers representing 290,000 hectares of coffee plantations in Ethiopia, India Brazil, Colombia, Costa Rica, Guatemala, Nicaragua and Mexico. Nespresso says the program pays farmers some 30 to 40 percent above market value, while providing operational and certification support.

At least $15 million from the fund will go toward production operations in Africa, including investments in Kenya, Ethiopia and South Sudan, where the company says it hopes to “revive high-quality coffee production.”

Closer to home, Nespresso is planning several initiatives to reduce the company’s environmental impact, including increasing aluminum capsule recycling rates by expanding collection capacity in at least seven Western and Northern European countries. The company says it also plans to comply with the Aluminum Steward Initiative standard being led by the International Union for Conservation of Nature.

Finally, Nespresso plans to plant 10 million trees in its AAA coffee growing regions, part of what the company is calling a “100% Carbon Insetting” effort. Carbon insetting is much like carbon offsetting, except with tangible benefits within the investing company’s own value chain — in this case, trees on coffee plantations.

Thanks for this excellent article.

While it’s fashionable in some circles to rag on Nestlé and bemoan the fact that Nespresso capsules dominate Europe’s 3 star restaurants, we on the specialty side would be much better off learning from this rather amazing company. Nestlé’s quality control and manufacturing practices are incredible, their sourcing capabilities are the best in the world and they are tremendously innovative.

For those who don’t know, there are something like 50 different Nescafé formulations sold in different markets worldwide, and the top-end offerings such as Alta Rica are nothing like instant coffee as most folks know it. They’re doing perfect Ethiopian Yergacheffe in Nespresso capsules and a bunch of other things we don’t see in the U.S. market. And when you consider that the world consumes 3000 cups of Nescafé per second, any improvements the company makes to its sourcing or environmental practices has a gigantic positive effect.

It’s my understanding that Nestlé (and thus Nescafé) and Nespresso have different supply chains. The majority of the 870,000 tons of green coffee purchased annually by the entire company go into the Nestlé bucket, while the portion sourced by Nespresso is just a small fraction of it. Most of the sustainability efforts are taking place, as this piece notes, in the Nespresso supply chain. While I agree that positive moves by a company this large are important and likely to have a large impact, a critical reading of their ponderous sustainability report does not leave me convinced that the efforts of Nespresso are reflective of the overall company sustainability philosophy.