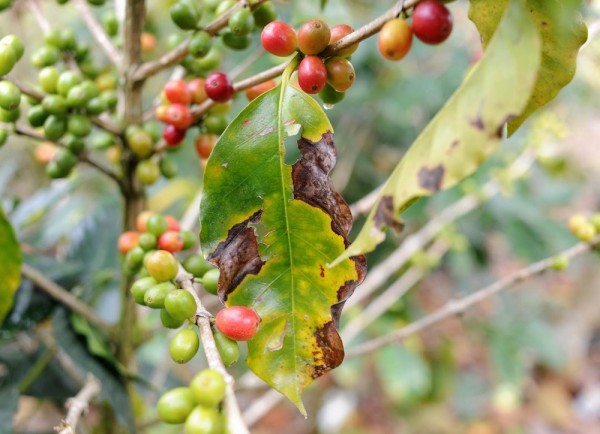 A plant affected by leaf rust. Photo by Union Microfinanza in Honduras.

The U.S. Agency for International Development (USAID) has announced a $10 million assistance investment expected to help some 220,000 people affected by drought and coffee leaf rust (la roya) in Guatemala, Honduras and El Salvador.

Announced by U.S. Secretary of State John Kerry and USAID Associate Administrator Mark Feierstein in advance of the UN General Assembly, the $10 million is going to the UN World Food Program, which cites recent reports of increased food insecurity among coffee farming families.

“We must ensure that Central Americans affected by the devastating drought and coffee rust crisis have enough to eat, the ability to support their families, and job opportunities,” Feierstein said. “This assistance will help prevent families from sliding back into poverty, allowing individuals to remain in their communities and contribute to local development.”

The award — which will provide cash transfers and food vouchers to the most vulnerable, food insecure populations in the three countries — is part of the UN World Food Program’s three-year, $80 million project targeting more than 400,000 people in Central America, in the coffee industry and beyond. It complements the approximately $20 million USAID has invested in the past year toward leaf rust mitigation in parts of the Central and South Americas, plus an additional $26 million leveraged from the private sector.

(related: The CQI Gender Initiative and Why Industry Should Care About Equity at Origin)

“Since 2012, coffee rust has affected more than two million people in Latin America, causing an estimated $1 billion in economic damage which could lead to 500,000 job losses,” USAID said in the announcement. The $10 million allocation follows repeated reports from FEWS NET that coffee rust damages have been leading to increased and widespread food insecurity throughout Central America. Said USAID, “The ongoing drought and coffee rust outbreak, combined with rising food prices, is increasing the severity of food insecurity and contributing to rising malnutrition rates.”