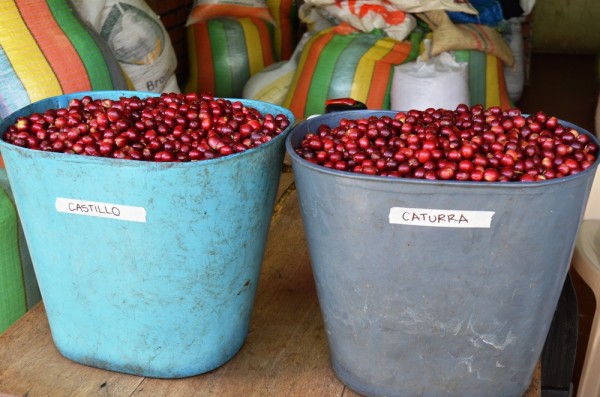 A week ago, some of the biggest names in coffee sourcing gathered at the Intelligentsia Coffee headquarters in Chicago to begin a quality analysis process that is likely to have a major impact on the future of Colombian specialty coffee.

Dubbed the Colombia Sensory Trial, the project is being led by Catholic Relief Services, in partnership with the Center for Tropical Agriculture (CIAT) and Texas A&M-based World Coffee Research, to help make quality judgements on two of the leading arabica varieties in the Nariño region, Castillo and Caturra. We first previewed the trial in July, framing its purpose as follows:

Traditional thinking is that Caturra, a natural mutation of the Bourbon variety, results in superior cup quality, while the more disease-resistant Castillo, introduced a decade ago by the Colombian research institute Cenicafé, results in higher yields and gives farmers more access to government incentives. But what if Castillo can actually hold its own against Caturra in the cup? What might that mean to U.S. coffee buyers? Or the Colombian coffee industry as a whole?

Regular Daily Coffee News contributor and CRS Coffeelands Blog director Michael Sheridan has been instrumental in organizing the trial, and here he provides the whos, whats, whens, hows and whys of the project, which began its first cupping round Oct. 1, with another to follow in January:

The Colombia Sensory Trial is a multi-faceted comparison of two leading coffee varieties in Nariño, Castillo and Caturra.

The mixed-methods approach to sensory analysis involves two separate processes.  In one process, leading coffee tasters from the U.S. specialty coffee industry and the Colombian National Coffee Growers Federation will blindly cup samples of the two varieties. In a parallel process, researchers from the sensory lab at Kansas State University (KSU), under the coordination of WCR, will also perform a descriptive analysis of the same samples.

Upon conclusion of the three sensory analyses, CIAT will lead a research team that also includes representatives from CRS, KSU and WCR to analyze and contextualize the results.  Research publications will include comparative methods analysis and decision-support analysis that puts the quantitative results in the appropriate social, economic and cultural context.  The project is designed to inform decision-making at multiple levels:

The sensory jurors will convene twice to cup samples of Castillo and Caturra under the direction of the judge, this week and again in January. CRS will work with researchers from CIAT, WCR, Kansas State University and other institutions to prepare preliminary results in time to present during the 2015 SCAA Symposium/Expo in April 2015.

Both panels will be hosted by Intelligentsia Coffee at its Roasting Works in Chicago.

Despite questions from readers about the “how” of the thing, I have never published a full account of the methodology.  Until today. This document describes in detail the process behind the Colombia Sensory Trial, from how we selected the farms that were chosen to participate to how we plan to contextualize the results, with lots of detail in between.

The most important question for all research is this: so, what?  What purpose does it serve?

The Colombia Sensory Trial is designed to inform decision-making at multiple levels: On the farm, where growers are seeking greater clarity about the returns they can expect on their investments in different coffee varieties; In the industry, where buyers are making purchasing decisions in a marketplace with rising standards for quality and a coffee landscape that is changing rapidly; and in the policy process, where governments, coffee institutes and public and privately funded projects determine which coffee varieties to promote, support and subsidize through the provision of certified seed, extension support, credit and grants and other services.

Awesome! This is the type of very helpful sensory studies our industry needs. I especially like the statistical analysis proving cupper validity prior to trying to show statistical significance of the results. It would be helpful for the community to know what % of this prestigious group of cuppers are statistically valid in their cupping results. . . the trustworthiness of cuppers is just as big of an issues to farmers and exporters as the demonstrative difference between varieties.

What a wonderful project, and obviously a really excellent group of cuppers. Inspiring to see – thanks very much for this article!