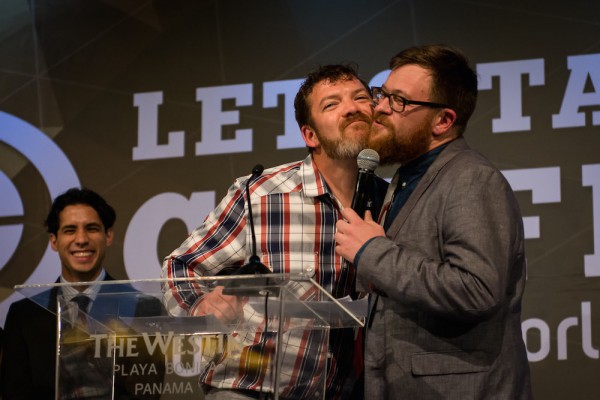 The 12th Let’s Talk Coffee, the supply-focused event put forth by Sustainable Harvest, came and went last week in Panama. Roast Magazine was proud to be a media sponsor of this year’s event, which as usual brought together an incredibly diverse group of some of the best minds in coffee to focus on all things related to sustainability and quality as it touches every step of the supply chain.

We will most likely be publishing numerous stories that grew out of this year’s Let’s Talk Coffee in the coming months. But for now, the next best thing to being there is seeing there, so here we give you Let’s Talk Coffee 2014 in photos:

(all photos courtesy of Sustainable Harvest)

David Griswold gets the group organized for the group photo.

David Griswold moderates ‘The One for One’ Model for a Global Supply Chain. Panelists seated: Elan Lieber and Karen Bynes (TOMS) and Darrin Daniel (Allegro Coffee)

The Rookie of the Year award is presented to Capucas, a cooperative in Honduras.

The panelists discuss Geisha: The Famed Bean, Ten Years On

The Sustainable Harvest team takes the stage for introductions.

Rick Peyser speaks during his presentation ‘Back to the Future 2.0’ . This was focused on a look back at his lengthy career with Keurig Green Mountain.

Group photo of the attendees at Let’s Talk Coffee 2014.

Grabbing an espresso between lectures. In the foreground is Mark Stell of Portland Roasting ordering a drink from Christian Ullrich.

Grabbing an espresso between lectures. Pictured are several of the baristas from the event, including Christian Ullrich pictured second from the right, who is the 2014 World Latte Art Champion.