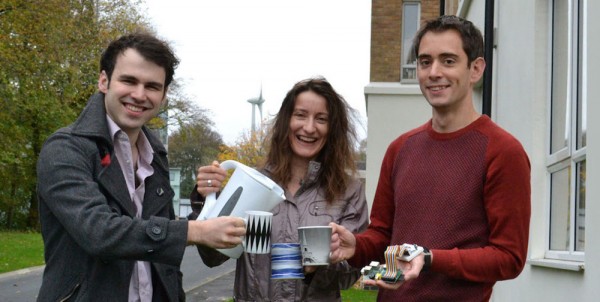 From left to right, researchers Newman, Ferrario and Simm, with the wind turbine in the background.

This may have no immediate bearing on day-to-day coffee shop operations or roasting schedules, but it nonetheless provides a fascinating new way to consider the relationship between coffee consumption and renewable energy.

Researchers at Lancaster (UK) University have created a new device called the Windy Brew, which automatically switches on an electric coffeemaker only when the university’s own wind turbine is generating enough electricity to make operation carbon-neutral. It challenges the idea that renewable energy technology is always working in our collective favor, suggesting instead that we should be limited to renewable energy output in real time.

“Windy Brew has been inspired by a possible vision of the future where we can’t just use energy whenever and wherever we like, but have to synchronize our consumption to the availability of renewable energy sources rather than burning fossil fuels,” says Senior Research Associate Will Simm, from the University’s School of Computing and Communications, who developed Windy Brew along with colleagues Peter Newman, Maria Angela Ferrario and Stephen Forshaw.

The simple device relies on a credit card sized single-board computer called a Raspberry Pi and an off-the-shelf, radio-controlled plug socket. When the campus wind turbine is chugging, the Raspberry Pi activates the socket and the brewing process begins. This is certainly a renewable energy invention more than a coffee invention, and the research team is also investigating applying similar technology to cell phone chargers and the university’s laundry systems.

(related: How a Young UK Company Is Changing the Value of Coffee Grounds)

“This equipment, unlike others, is not about sourcing a cost effective energy supply,” says Newman. “It’s not about reducing energy consumption; but it is about using energy more intelligently when it is more renewable. Reduced costs are a bi-product benefit.”