Report: Climate Change May Cut Available Coffee Growing Land in Half by 2050 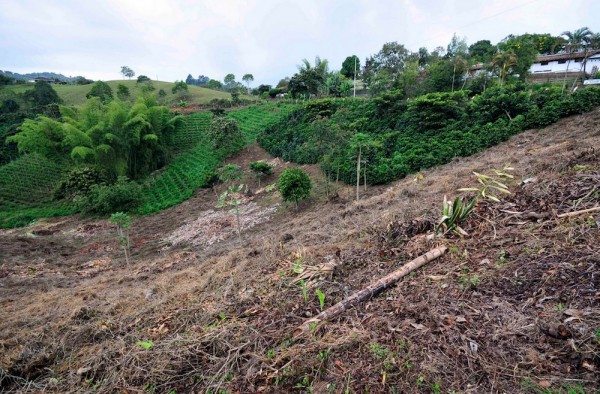 Pic by Neil Palmer (CIAT). An area cleared of coffee plants due to their susceptibility to pest and disease outbreaks related to rising temperatures, in Cauca, southwestern Colombia.

The amount of suitable land for growing coffee on a global scale could be cut in half by 2050, with key growing regions in Brazil and Vietnam particularly impacted.

This is among a frightening list of takeaways from a new climate modeling study conducted by researchers from Humboldt University in Berlin and the Center for Tropical Agriculture (CIAT). It suggests climate change will have drastic effects on production capability of arabica and robusta varieties in all of the world’s current growing regions, with far-reaching negative economic implications.

“Climate change will reduce the global area suitable for coffee by about 50 percent across emission scenarios,” the research team wrote in a study to be published this month in the journal Climate Change. “Impacts are highest at low latitudes and low altitudes. Impacts at higher altitudes and higher latitudes are still negative but less pronounced. The world’s dominant production regions in Brazil and Vietnam may experience substantial reductions in area available for coffee.”

The research team expanded on the well-known 2012 study led by Aaron Davis suggesting that wild Arabica could reach extinction due to climate change by 2080. The new study incorporated five different climate models to measure potential impact on a global scale, not just arabica’s native Africa. The new study geo-referenced tens of thousands of existing coffee plantations to determine current climactic suitability for coffee farming, then applied the numerous change models to determine the suitability of those locations in 2050.

The results were not positive, suggesting that current low-altitude farmland could be drastically reduced throughout Brazil, Vietnam and other current high-producing regions. “Gains elsewhere will do little to offset these losses, giving global losses in suitability for both species of about 50 percent,” the researchers say. “Only East Africa and the Asian island states show substantial gains in suitability for both species.”

The study also sheds some important light on the potential effects on smallholder farmers, rather than large plantations — again, to troubling results. In particular contrast to Davis’ 2012 report, the study noted that overall suitable land in East Africa may actually increase by 2050, although the threat to native species and more sensitive arabica varieties still exists.

“Our data are based on the distribution of commercial plantations, which have adapted to a broader range of climates than those of Arabica’s native range,” the study reads. “This difference suggests that in areas where coffee production remains feasible, production systems will have to be adapted. The necessary fundamental changes in local production systems would pose substantial challenges to smallholder farmers.”

The authors correctly suggest that leaders in the agricultural sector and other policy-makers should be acting now to address these potentially imminent challenges, including the idea that land that may be suitable for future farming may also require deforestation, exacerbating the effects of climate change.

“Given the long lifespan of coffee plantations, the feasibility of migrating coffee to land that will be more suitable under climate change needs further study,” the authors suggest. “The areas of East Africa that will become more suitable for coffee are currently not forested, in contrast to the Asian areas that will gain suitability, which currently are under forest. Climate-induced migration may thus result in further emissions from land-use change. Whether or not newly-suitable areas will be threatened by conversion to agriculture depends on economic incentives.”

Another bogus report. When the Ice Age hits, yes, coffee will be wiped out, but until then, humans adapt to nature and always will. Change with nature, and stop changing nature.

There is always changing climates, this is the way God created the earth after sin in the garden of Eden. but, it is just the way things are and man continues to live in the world. Coffee will always be grown. Global Warming is a hoax perpetuated by Obama and His Czar’s as a way to get us off His real control issues. We need to hear the truth.

Can I purchase 40 year futures on coffee then? 🙂