Who Roasted the ‘Miracle Coffee’ That Saved Serena Williams in Perth? 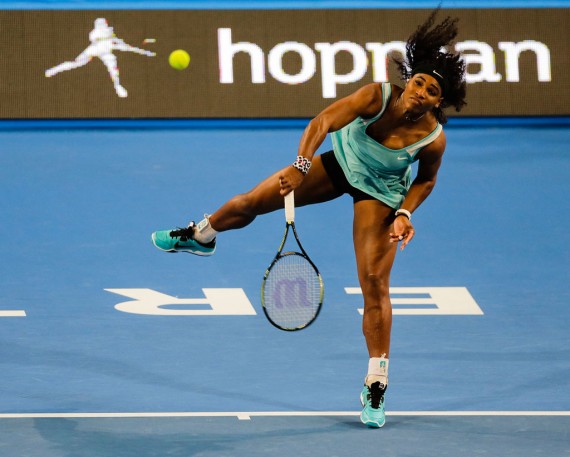 Serena Williams at the Hopman Cup in Perth. Photo courtesy of Hopman Cup.

Serena Williams is crediting Australian espresso with helping her overcome an 0-6 first set to win her first match of the Hopman Cup in Perth.

“I just asked them to get me a shot of espresso,” Williams, the top-ranked player in the world, said in a post-match press conference. “I asked them if it was legal, because I’ve never done it before.”

Once caffeinated, Williams fell down 1-2 to 12th-ranked Flavia Pennetta in the second set but would only lose one more game, winning the match 0-6, 6-3, 6-0. The Hopman Cup is a prelude to the Australian Open later this month.

Williams said it was a combination of jet lag, an early match start and breaking from her normal coffee routine that caused the sluggish start.

“I needed some espresso. I needed to wake up – the jetlag gets you all the time,” she said. “I wanted coffee with my bagel and whatever coffee it was, it was really good.” She also described the espresso as “miracle coffee.” 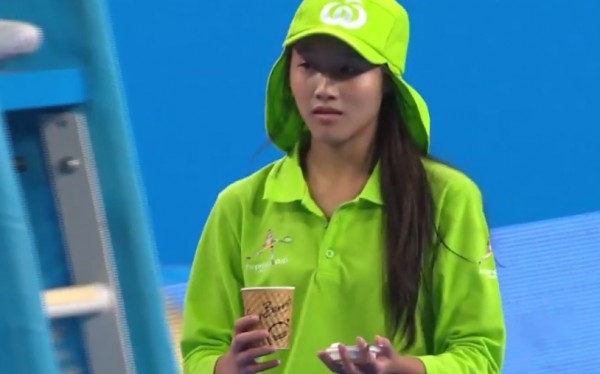 A ball girl bringing Williams the double espresso in a branded cup.

In this video, Williams is seen requesting the espresso, which is served to her in a branded, brown paper cup. Let us know if you have any insight into who may have roasted this “miracle coffee.”

The “miracle coffee” that Serena Williams liked was roasted by our company, The Northbridge Coffee Roasters (theroasters.com.au) at European Foods. It was our Braziliano SuperBarista Blend, which is roasted in Perth, Western Australia.

With a history in specialty coffee spanning back to 1936, The Northbridge Coffee Roasters at European Foods is among Australia’s longest continually operating coffee companies, which still to this day remains owned by our family, the Re family.

We are unique in many ways, not the least because we proudly operate both artisan and state of the art roasting facilities (all Probat by the way). The plant we installed in the last few years really has become our temple and has served to greatly improve our quality. That said, just like vinyl records, we still have a passion for artisan roasting as well. Our retrofitted 1958 Probat 75 never misses a beat either, and in fact, these days, is sounding better than ever

Our SuperBarista blend was named in honour of the world’s elite baristas, with the official spiel going something like this:
“Excelling in every facet of the art of coffee making, the Braziliano Coffee Superbarista exudes passsion, unswerving commitment and the utmost pride, the culmination of a collective, exacting effort. The prestigious Braziliano SuperBarista performs a balancing act between innovation and perfection, efficiency and craft which results in the enjoyment of coffee that pervades history and the globe”

Our whole team is genuinely excited that our humble product has helped Serena out, and indeed, possibly served to get consumers to order a few more espressos all over the world!! Of course, we’ve also upped the roasting on the miracle blend, ready to supply anyone and everyone who would like a taste!!

And if any coffee friends are ever down in Perth, Western Australia, make sure you come and say hi. We always love a chat with passionate coffee people like ourselves.

This Company is Legendary in Perth, the oldest roaster in WA. John and his team rock, especially when eating a fresh roll and great espresso! Bravo!
Aidan Broderick