The ‘Taproom of the Future’ is Coming to Northern Ky., and Yes, It Includes Coffee 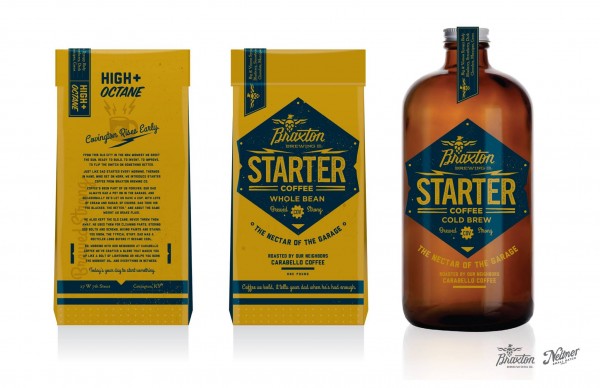 Braxton Brewing Co., a Cincinnati-area micro brewery named after the street on which the company had its modest beginnings in a garage, is preparing to launch what it’s calling “The Taproom of the Future.”

The exciting news is, if this is indeed the future of taprooms, the future looks bright for coffee.

The Braxton team is partnering with Carabello Coffee, also in the Northern Kentucky part of the Cincinnati metro area, for a private label deal that involves a new coffee brand for Braxton, called Starter. The name is yet another reference to the brewery’s humble first days.

“The flavor profile of the blend we created with the Braxton Brewing team is something I am really proud of,” Carabello founder Justin Carabello said in a recent announcement of the new coffee brand. “To talk through what they wanted and then find coffees to roast, pair together and blend was a real collaborative effort.”

The taproom will include a coffee bar for brewed Starter coffees, as well as for whole-bean package sales. There will also a standard cold brew, as well as a tapped nitro cold brew, after the Braxton team made a purchase at the recent Craft Brewers conference in Portland. There’s nothing particularly groundbreaking in this coffee program, but what is more interesting is why the program exists, and in a brewery of all places.

Braxton is pitching the new facility as a kind of a small-business incubation hub, citing its own growth history as well as a growing class of young entrepreneurs in the greater Cincinnati area. The Braxton team says that, in addition to being a taproom that visually resembles the original garage, the space is “truly built for business,” including an open floor plan, ample table space, whiteboards, a projecter and an intentionally fast wireless internet. Coffee is an elixir designed, in this environment, to help business grow.

For the Starter brand, Braxton turned to the local creative firm Neltner Small Batch — a fitting name for a coffee collaboration.

“We wanted to build a badass coffee brand for Braxton. Coffee and craft beer have many of the same themes to tap into — taste, craftsmanship, and both are social beverages,” says Neltner Small Batch‘s Keith Neltner. “We created the name ‘Starter’ for the coffee as a natural build on the garage origin story of Braxton. It also speaks to the renaissance of the midwest and the blood and sweat everyone is willing to pour into building something great.”

The reinvented tasting room and Starter coffee brand are scheduled for a June 16 official launch.