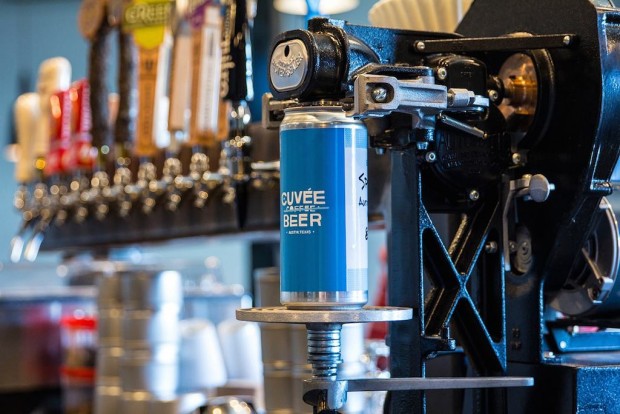 Austin, Texas-based roaster Cuvee Coffee is in the middle of a fairly ridiculous legal kerfuffle that could have widespread implications in the beer industry.

The Texas Alcoholic Beverage Commission has given the company a 30-day notice to remove its “crowler” machine, a device that seals 32-ounce cans for to-go sales of beer or any other liquid that might be drinkable (can + growler = crowler). Crowlers are an invention of Oskar Blues Brewing, the can-centric craft brewing company based in Colorado that also happens to have its own coffee roasting offshoot.

The TABC visited Cuvee’s stunning flagship retail location — where rotating beers are on tap — last week, following a complaint stemming from a regular monthly event in which Cuvee invites guest beermakers in for crowler-focused tastings. The complaint alleged that the brewery had paid for some marketing of the event in the form of printed fliers.

During their visit, TABC representatives told Cuvee founder Mike McKim that the crowler machine had to go. McKim told Daily Coffee News by phone that the reasons why seemed as empty as a recycling bin can. 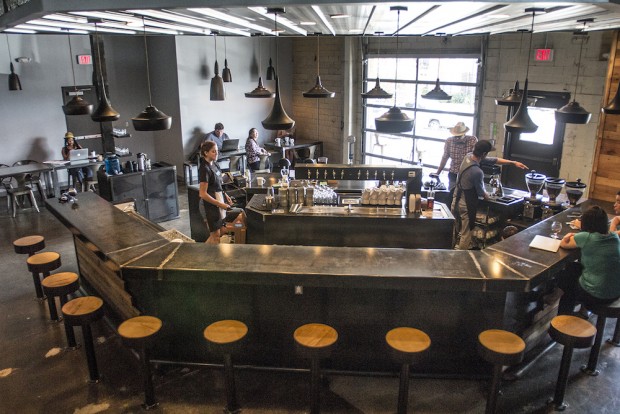 The bar at Cuvee Coffee

“It’s just kind of ridiculous. What’s the difference between clamping a lid on, screwing a lid on, sealing a lid on, or crimping a lid on,” said McKim, who according to the TABC is free to fill growlers from Cuvee’s taps, yet prohibited from filling crowlers. “It was maddening. It was like going around in circles. I finally I got to the point that no matter how valid my argument was, or how ridiculous their argument sounded, it didn’t matter.”

Further muddying the waters in Cuvee’s case is the fact that the TABC has no formal definition for a growler, instead referring to any packaged alcohol vessel as a container. This defies rules created by federal agencies that define growlers not by physical composition or lid type, but by when they were filled and on what type of premises.

McKim said he plans to fight the decision, one that could affect the likes of local large grocers Whole Foods and Central Market, both of whom are currently selling crowlers out of their bar areas, let alone any other crowler seller in Austin and beyond. Said McKim, “I’m getting a lot of phone calls behind the scenes.”

McKim said Cuvee sells about 40 crowlers per week, representing a small drop in Cuvee’s revenue bucket, but that the absurdity of the situation is compelling him to stand up to the TABC.

Interesting article! I agree with McKim, sounds like a lot of nonsense.

I’ve got to say that I am actually really disappointed in this article.

I don’t necessarily disagree with Cuvee’s opinion, but this article is so completely biased and is hardly good journalism. Was the TABC even contacted and asked about this issue? What was their reasoning behind ordering Cuvee to remove the crowler apparatus? Another article I read about this issue mentioned that Cuvee needs a brewpub license to sell crowlers (http://spirits.blog.austin360.com/2015/07/16/cuvee-coffee-bar-told-crowlers-not-permitted-by-texas-law/), which is not the same as just banning it all together, and that is what this article implies.

There was a comparison with Oskar Blues Brewing, but Oskar Blues is a brewery, not a coffee shop. In addition, it is located in a different state, which often means a different set of applicable legislation.

Also, on another note, it looks like the term Crowler is trademarked by Oskar. That begs another questions of whether Cuvee should even be allowed to use that term.

I understand that with online publications speed is key, but it shouldn’t be at the expense of quality reporting.

You are totally missing the point of the article. If they have a permit to sell growlers, then they should be able to sell crowlers as there is no specific definition of what a growler is. I own a coffee shop and I sell growlers without needing a brewpub license since I’m not a brew pub. AND neither is whole foods.

Cuvee should fight this. TABC is out of line.

I’m not saying that Cuvee’s opinion isn’t valid. In fact, I stated in my original post that I didn’t disagree with them.

My complaint has to do with the quality of information provided in the article. No matter how the author feels, as a writer for a respected trade magazine, it is bad and arguably unethical journalism to infuse his own opinion into it unless he explicitly states that it is a blog or an opinion piece, which he doesn’t. If he is purely just reporting the news, then it is his job to provide all relevant information, all sides of the issue, and then let the reader decide for themselves what they believe is right or wrong.

The unfortunate thing is that, by not evenly reporting on both sides, the author actually hurts Cuvee’s position. If you read the 360 article that I linked in my earlier comment, you’ll find that, in mentioning the laws and regulations that the TABC was citing, they shine light on the inconsistency of the TABC’s position. The Roast article, on the other hand, doesn’t mention any of this. How is anybody in the coffee community going to effectively show his or her support if they don’t even know what legislation or regulation is at play?

I know you may find this petty in light of the issue at hand, but this is the type of manipulative reporting that a lot of main stream media companies use to get clicks and attention at the expense of providing quality, accurate, and significant news. I could have just let it go, but complacency is only going to allow for skewed news to continue. In the long run, that is going to hurt the coffee community much more so than any crowler ban the TABC could enforce.