How Much Is Latte Art Really Worth? A Whole Lot, New Study Says 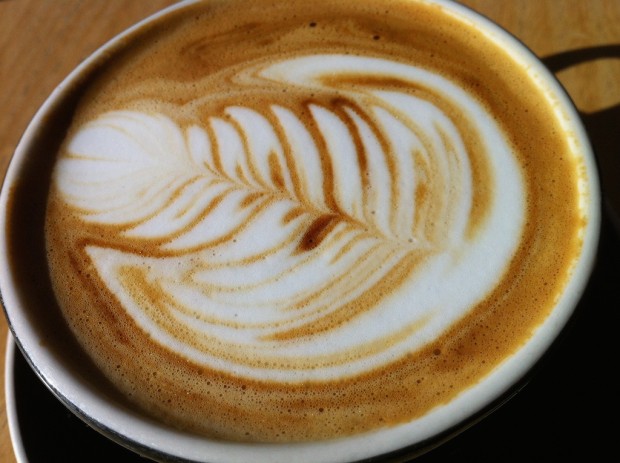 The presence and general shape of latte art have a profound impact on consumers’ collective perceptions of value and even taste, according to new research from British and Australian researchers that included participation from three-time UK barista champion Maxwell Colonna-Dashwood.

In a study recently published in the Journal of Sensory Studies, researchers made some illuminating discoveries related to value and flavor perception using lattes of the same recipe, with latte art as the only variation. Their conclusions add to the growing pile of research indicating that the visual presentation of food is a useful tool in manipulating consumers’ taste expectations and quality perceptions. In this case, they found that consumers were willing to pay 11 to 13 percent more for a latte with art than for a latte without it.

“The prediction was that the amount that a person would be willing to pay for the drink would be lower in the absence of latte art,” the researchers wrote. “The empirical data collected from a naturalistic environment (a small, independent coffee shop) provided support for this hypothesis.”

The coffee shop in this case happened to be a world-class one: Colonna-Dashwood’s Colonna & Small’s in Bath, where the influential barista prepared art-topped and art-free lattes for the study. Test participants that were served lattes by Colonna-Dashwood, who is no stranger to science, collectively demonstrated no difference in general “likability” between the two latte types, although the participants served art-topped lattes were likely to pay 13 percent more for the product than those who were served artless lattes. When subjects were simply shown photos of lattes side-by-side in a broader internet-based test, the difference was 11 percent.

Said the research team, “A possible explanation for this pattern of results might be that the participants ascribed a higher effort and/or skill to the creation of the cafe latte when it was served in a more aesthetically pleasing manner, a phenomenon called ‘art-infusion.’”

The shapes within latte art — specifically, rounded shapes versus angular shapes — had similarly significant effects on consumers’ expectations of taste, some of which defy previous research on food presentation as it relates to sensory analysis. Participants were shown two lattes, one topped with a star with angular edges, the other topped with a star with rounded edges.

In general, study participants perceived the angular lattes as more bitter, more likable and of a higher quality. The research team noted previous research suggesting that angularity is indeed associated with bitterness while roundness is associated with sweetness, although rounded shapes have historically been more associated with higher quality and likability.  The study offers several potential reasons for this anomaly, including the idea that participants may have simply perceived that the rounded edges of the star represented a failed attempt at good latte art. In their conclusion, researchers went so far as to suggest “rounded designs may be preferable.”

the designs used in the study

“If coffee producers want to manipulate people’s expectations of their products, adding a star-like shape to a cappuccino will likely increase expected bitterness, likability and quality; although rounded and angular shapes influence the perception of cost and quality,” the study reads. “The effect reported here suggests that cafe owners and baristas should carefully consider whether latte art should be added to the product they are serving, and what type of visual design they intend to use.”

In addition to Colonna-Dashwood, the study’s authors include George Van Doorn, of Federation University Australia, Reuben Hudd-Baillie of Monash University and Charles Spense of the University of Oxford.

That’s completely cultural, however. In a place like Napoli, Italy, latte art is perceived as playing with your food. A kind of childish nonsense like making smiley faces with syrup on your pancakes.

Meanwhile, in Australasia, it seems most consumers confuse latte art with coffee quality — so much so that they treat it like the lamb’s blood placed above the doorway in the Jewish Passover to ward off the evil spirit of death by bad coffee.

Can we get a little insight to how these people were surveyed? How were these figures determined?

The art that results from properly pouring beautifully textured milk to a perfectly extrated shot of espresso has a purpose and that is to ensure those are well mixed so when u take your first most delicious sip u dont get hit by the full power of crema only or the sweet bland taste of plain warm milk but youll actually enjoy a well balanced flatwhite/latte/cap .. Latte art like the ones presented above, the star like one on that bubly cap is what youd serve kids in NZ and OZ. Italian may have started it all but kiwis and aussies have perfected it!

The angular star is not artful, looking like it was created with a stencil kit, but the “rounded star” looks like a new employee’s attempt at a sea star. My point being, they are not comparable or reasonable choices to represent the usual latte art in a café. Strange way to go about the experiment. I don’t know how they determined how much people would pay. That would be very interesting to know.