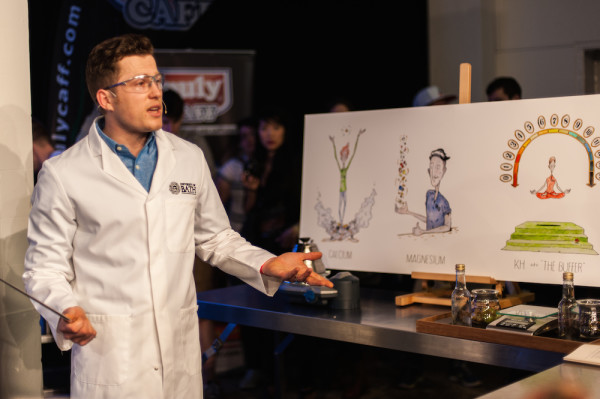 Maxwell Colonna-Dashwood of Bath’s Colonna and Small’s delivered a portion of his winning routine at the UK Barista Championship in April in a white lab coat and protective glasses. Of course, this was a bit of theatrical role playing, but there was also some serious science knowledge being dropped.

Colonna-Dashwood was then relaying research conducted by University of Bath computational chemist Chris Hendon, who helped school the barista/owner on brewed coffee’s most voluminous component: water. Along with Colonna-Dashwood’s partner Lesley, the two have just published their research on water in coffee in the Journal of Agriculture and Food Chemistry.

It is research, they say, that helped propel Colonna-Dashwood to the upcoming World Barista Championships, and that challenges coffee industry guidelines for water consistency. In a brief introduction of the research published by the Royal Society of Chemistry, Hendon writes:

Analysis of extracted coffee by gas chromatography–mass spectrometry (GC-MS) suggests that the average coffee bean contains upwards of 500 chemical compounds, excluding all of the heavy cellular material. Of this complex array, the bean is primarily a mixture of weakly acidic molecules, and the weaker acids are more desirable. A ‘bad coffee’ can be the result of any combination of the aforementioned variables going awry.

Hendon says that despite Colonna-Dashwood’s precision in grinding, weighing the dry mass of coffee and setting consistent temperature and pressure for extraction, “It’s almost impossible for him to control the chemical composition of the incident water:”

The coffee industry has concluded that an ionic concentration of 150–300 parts per million (ppm) is ideal for coffee extraction. But that is inherently flawed; water could contain 150ppm of HCl and would certainly not taste very nice. Conversely, water could contain 150ppm of NaHCO3, which might make you burp as the acid/base reaction in your stomach rapidly releases gaseous CO2. So in search of the perfect coffee, it would be wrong to accept these guidelines without some thought as to the impact of different chemical compositions.

Are you using an ionic conductivity probe to determine the chemical compositions in your water? Shame shame, says Hendon, because you’re relying on the false assumptions that the ratio between dissolved ions is approximately constant, and that the ionic conductivity of all ions is approximately the same. Instead, Hendon says, you must be using an atomic absorption spectrometer, a singularly purposed piece of lab equipment that starts at about $12,000.

Obviously, this is reaching technical levels that may be impractical for many coffee retailers to explore, but at the heart of the work is shared desire among the researchers to develop and manipulate flavors in coffee. Says Hendon:

I had learned from fundamental chemistry that electron-rich motifs interact with electron deficient motifs. Essentially all molecules in coffee feature a heteroatom (an electron-rich motif), which should interact strongly with dissolved cations in water. Dissolved anions may act as bases, but are not expected to interact with coffee particulates. Thus, water with a high cationic concentration should facilitate a greater extraction of flavorsome notes in coffee.

For paid access to the complete study, visit ACS Publications. That said, Colonna-Dashwood is sure to present a nice summary during his upcoming World Barista Championship routine in Rimini, Italy.

“In search of the perfect coffee”… apparently they never heard of Howard Moskowitz.