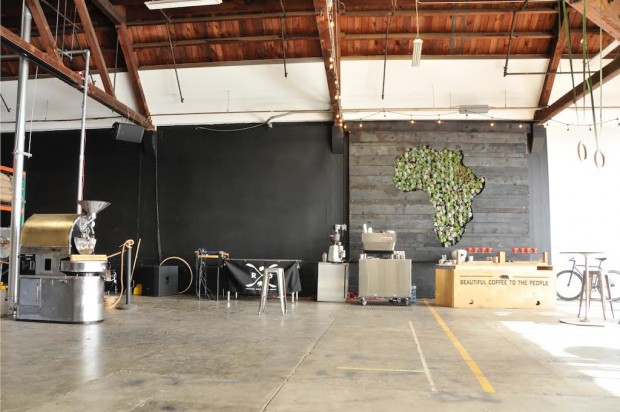 The last we heard of the inspiringly progressive, diversity-driven Red Bay Coffee roasting company of Oakland, Calif., they were riding high on a Kickstarter win, fresh from securing Blue Bottle’s vacated Berkeley Farmers Market spot, and had a converted shipping container café soon to be installed. Six months later, the café has yet to be installed due to a last-minute permitting headache soon to be sorted, but the delay hasn’t slowed down progress elsewhere.

By all accounts, Red Bay is snowballing right along, and its founder Keba Konte is a busy, creative man. The company has moved out of its cramped production “dojo” and into an expansive 7,800-square-foot factory space where their Probat L12 has been joined by a refurbished Probat L5, and a purchased Probat UG-22 will arrive sometime within the coming weeks.

Decorated with a beautiful living wall with greenery in the shape of the African continent, the space at 3098 E 10th St. has already hosted events, and it neighbors a local brewery Ale Industries, as well as a cluster of 18 artists’ studios. In time the company hopes to build a retail component within the space. 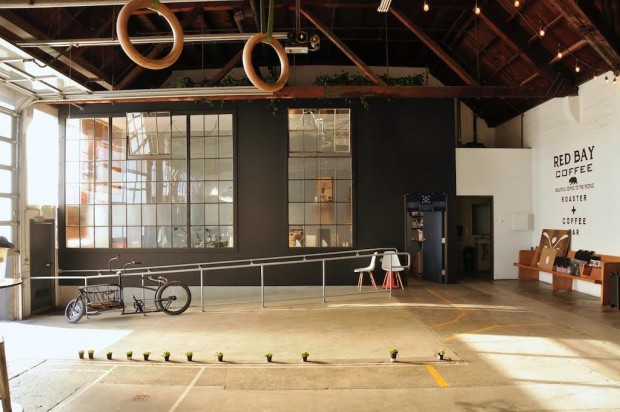 The uptick in production helps supply a doubled farmer’s market footprint, as the company has since last year secured two more exclusive contracts at Bay Area markets, the Hayward Farmers Market and the Newark Farmers Market. On top of that, Red Bay has also become the official coffee provider to the offices of San Francisco-based Uber Technologies Inc., makers of the Uber app.

“I think what got us to the negotiating table was that they likes our principles of diversity and inclusion,” said Konte, adding, “What sealed the deal was the level of engagement that we’re proposing.”

Going far beyond beans and coffee, Red Bay will provide exclusive workshops for Uber employees once per month in each of their offices. Presentations will focus on everything from basic brewing at home to the complete roasting process. There will be roundtable discussions with actual coffee producers, public cuppings and more.

“They’re serious about their coffee,” said Konte. “The food and beverage directors there, they’ve got a lot of opinions, and they’re in San Francisco, there’s a lot of great coffee here. There’s a whole spectrum of tastes and demands from their workers, so we’re going to really try to tap into that interest.” 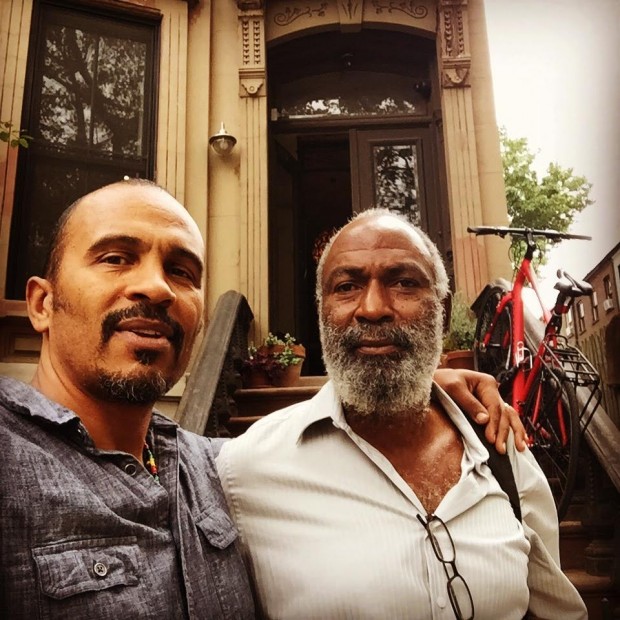 That’s not all Konte’s company has tapped into. On top of all this, the truly big news is that Red Bay Coffee has purchased an entire container of Tanzanian greens from Sweet Unity Farms, the 1,000-acre farm owned and directed by David Robinson, youngest son of baseball legend and political activist Jackie Robinson.

“It is, by extremely far, the most coffee we’ve ever bought at one time,” said Konte, adding that his company is the exclusive West Coast U.S. buyer of Sweet Unity’s crop for this year. Robinson has been living in Tanzania for roughly 30 years and growing coffee for 25 of them in “relative obscurity,” according to Konte, who describes Robinson as a fascinating character with whom he developed a friendship last summer.

“First and foremost, his coffee is exquisite,” said Konte. “He’s created a really vibrant coop of coffee farmers. We’ll be the only ones serving his coffee, or roasting it anyway, and he’ll be out here in September to participate in a coffee producer roasting residency.”

Konte described Robinson’s upcoming residency as the start of a new ongoing program whereby Red Bay will continue to facilitate coffee producers’ travel to their Oakland roasting HQ for exposure to the roasting, cupping and serving processes that happen here in the U.S., in order for them to experience and voice opinions about their products as they appear at the opposite end of their journey up the supply chain. 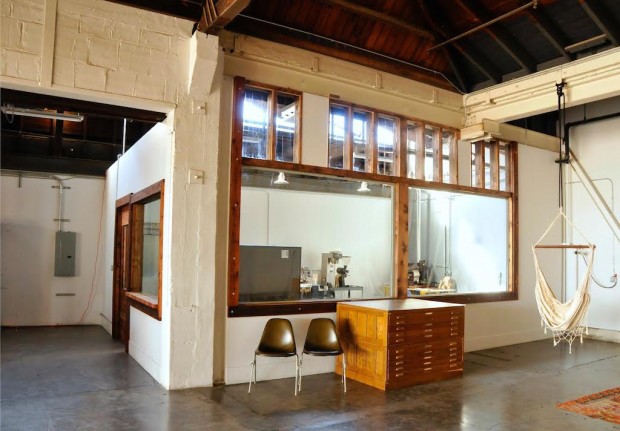 “We’ll have them help in the process of developing a profile for the coffee that they grow,” said Konte, who also hopes the farmers will contribute to presentations open to the public and to Red Bay workers for sharing perspectives on “what it means to be a coffee farmer.”

“We do a lot academic conversations around that, you know, with slideshows, and ‘this is what the coffee looks like,'” said Konte. “We can talk about those things, but it’s nothing like the farmer bringing up those things with really interesting anecdotal stories, like when they had their entire trucks loaded to the gills and they got held up at gunpoint and their entire years’ work, robbed.”

As for the profit-sharing arrangement Red Bay had hoped to initiate upon opening the container café in Oakland, it has, in the midst of the café’s delays, found another route to fruition. “That got folded into the broader business,” Konte said. “It was kind of hard to not do that.”

The plan, which will go into effect in the second quarter of 2016, is a simplified version that will set aside 10 percent of the profits of the company and split it equally amongst all of its workers. The split will be commensurate with hours worked, but not dependent on the role or position of the worker, nor will it be contingent upon performance reviews or anything else. Just a straightforward cut.

“I know other folks who are doing similar things, and they tie them into job evaluations. That was just all too much to maintain,” said Konte. “I didn’t want it to be so subjective.” 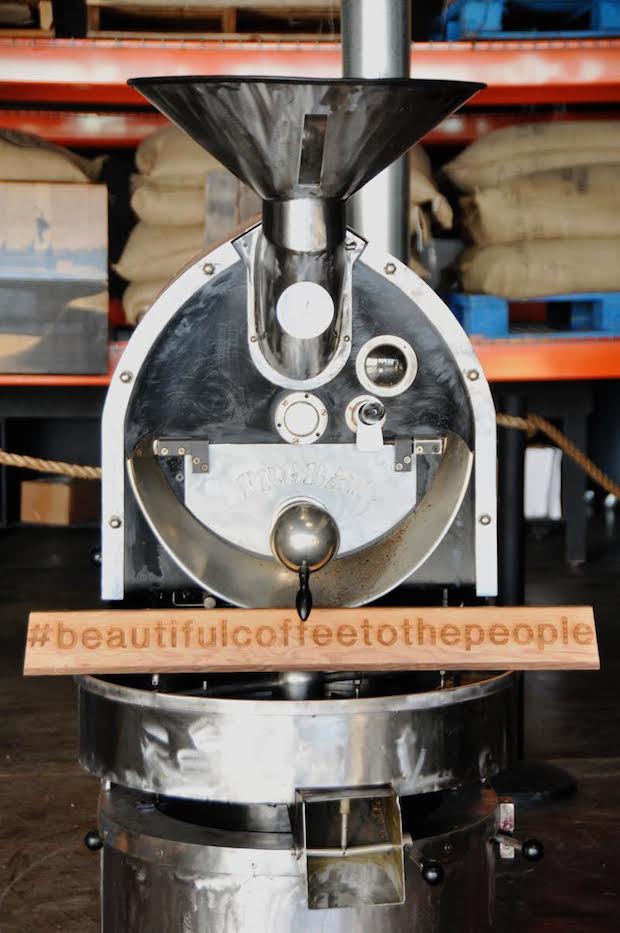 The café meanwhile — stymied by a permitting oversight related to the 2-foot-by-2-foot foundation of sorts for parking the converted container, mobile-home-style — should be open anywhere from one to three months from now, depending on how negotiations play out.

“I’ve got a really awesome team of folks here. We’re all just working as hard as we can and trying to do what we do, and do it really well,” said Konte, undaunted. “It’s easy to try to bite off a lot of projects, but we’re really doing our best to give each the attention that they deserve.”