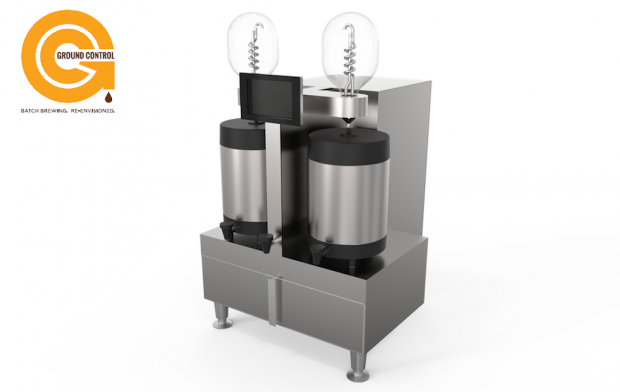 A rendering of the Ground Control brewing system, which will make its public debut next month in Atlanta.

The basic principles of commercial batch brewing have remained more or less the same since the invention of batch brewers themselves. Strides have been made in zeroing in on parameters, in sleek under-counter systems, in touchscreen interfaces and in brewers that communicate with grinders and so forth, but the fundamental process of dribbling plenty of heated water onto a generous bed of grounds to make a whole lot of coffee at once hasn’t changed.

A new company called Voga Coffee is poised to disrupt that paradigm with their Ground Control brewer, a new take on batch brewing to be rolled out at the upcoming SCAA Event in Atlanta.

The Ground Control’s foremost departure is that it’s not a drip or pourover-type brewer at all. It’s closer to a full-immersion type of brew, but not exactly. The Ground Control basically subjects a given bed of grounds to a series of quick mini-brews, drying the grounds completely between each brew and depositing all into a single vessel as the method proceeds, for a finished, combined batch consisting of only the sweeter, more desirable and nuanced early extraction, and none of the later, bitterer compounds that come out over longer extraction periods, according to the company.

“This method is counter-intuitive to accepted practice, as we’ve all been taught to never let our bed of grounds dry,” Voga Coffee Co-Founder and CEO Eli Salomon told Daily Coffee News. “But it turns out there is a deep chemistry rationale behind our approach.”

Said Salomon, “Every time you eliminate all the water from the grounds, you establish a new solid-liquid phase partition equilibrium. In advanced chemistry labs, this technique is used to enhance extraction efficiency. This addition of new, fresh solvent to dried grounds essentially ‘re-starts’ the extraction, putting you at the beginning of the extraction curve. You can get at all the flavor you left behind in the prior brew cycles, but also remove all the brewed coffee from the grounds before it ever gets to the point of the extraction curve where bitter tannins are significantly pulled out.” 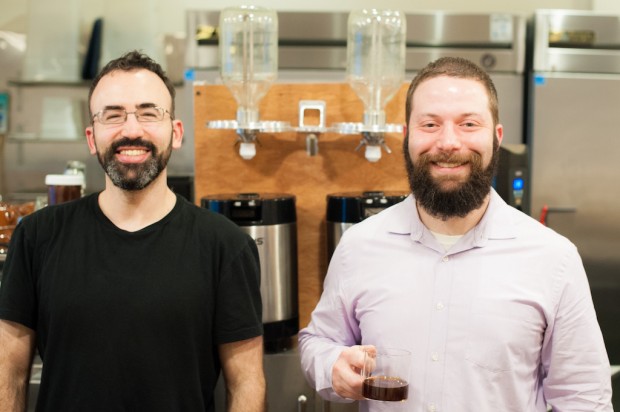 The chief mechanical breakthrough to this method is the incorporation of a powerful 1/2 horsepower vacuum pump that the company says pulls the liquid out of each brew cycle with enough force as to leave the bed thoroughly dry between cycles. According to Salomon, the entire multi-extraction process takes about 4-7 minutes depending on batch size and dose, and yields the industry standard TDS of 1.3-1.5.

The force of the vacuum also reportedly grants flexibility in the user’s choice of grind size, from espresso-caliber fineness through to French press-style coarseness, letting users experiment with flavor and concentration as they see fit. Additionally, because the vacuum system must remain airtight, the flow-path of brewed coffee includes a stop in an air-tight, glass light-bulb-shaped collection chamber at the top of the machine before it reaches a conventional carafe.

Customers are treated to a fascinating, bubbly display of accumulating brew before a valve opens to release the coffee down into the carafe. This is not only an eye-catching conversation starter in keeping with specialty coffee’s overall goal of transparency at every turn — quite distinct from the less engaging opacity of conventional batch brewing equipment —  but it’s also a system that allows cafes to continue using whatever carafes they already own, rather than having to buy something proprietarily made by Voga. Temperature loss in the glass chambers is negligible according to Salomon.

User-settable parameters include the machine’s boiler temperatures, as well as the duration, volume, and total number of extraction cycles in a “recipe,” 40 of which can be stored in the machine’s built-in memory. Duration of vacuum cycles can also be set, all of which adds up to some advanced recipe-crafting for dedicated users to toy with and scale up or down as they see fit, depending on their coffee and other factors.

Voga generally recommends a cycle of three extractions, each around 60-90 seconds, although it’s ultimately up to the user to decide, and there’s also an easy mode that provides reliable pre-configured recipes without obliging a user to mess with every setting, if one prefers. 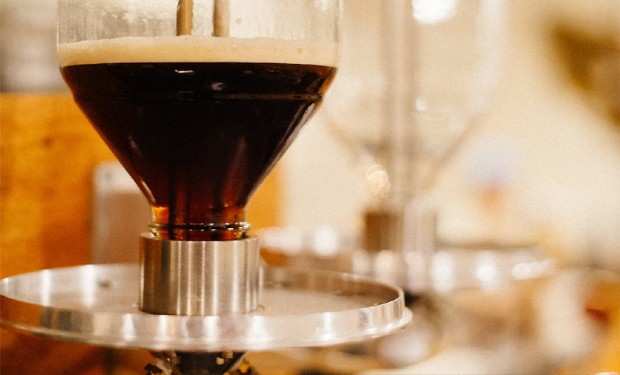 The machine includes its own reusable metal filters, although it accommodates off-the-shelf paper filters as well. The workflow is essentially the same as any other batch brewer: A barista doses the brew basket drawer, inserts it at the bottom instead of the top of the machine — a safety feature that minimizes the chance of any hot drips or spills, Voga says — taps an icon on the Android-based tablet interface, then dumps the dry, spent grounds when it’s done a few minutes later.

Yet even if it did brew coffee the old-fashioned way, the Ground Control would set itself apart through several other inventive traits. A heated plate maintains consistent brew basket temperature during the procedure; flow meters are employed to ensure the precision of each water cycle; and a “calibrated stirring mechanism” ensures thorough water-to-coffee contact in larger doses by carefully agitating the grinds while brewing.

The dual-station Ground Control system brews anywhere from one cup to 1.5 gallons per station, and the machine is made almost entirely out of U.S.-manufactured components and materials. It is assembled by hand in plants in the Mission District of San Francisco and in Berkeley, Calif..

As for the professional lineup guiding this impressive product to market, it is formidable. Salomon has plenty of experience with envelope-pushing coffee equipment, having been a part of Alpha Dominche‘s strategic team in launching the Steampunk back in 2012. Salomon readily attributes the high-minded science of the Ground Control brewer to Voga Coffee Co-Founder Dr. Josh Avins, a PhD in Chemistry with expertise in organic extraction theory. Confirming that cups live up to hype from the specialty perspective is Director of Quality Jason Sarley, a Q-grader, Roasters Guild certified Level One Roaster, and Kenneth Davids’ co-cupper on Coffee Review.

The Ground Control batch brewer will make its public debut at the Voga Coffee booth at the SCAA Event in Atlanta, Ga. from April 14-17. The company is encouraging roasters to bring their coffees to the booth to be brewed in the machine on display. Production units will be available for sale at the event, and the company has already sold several, which are currently being manufactured and will appear in cafes around California in the coming months.

As for what’s next for Voga, Salomon suggests that the Ground Control is only the beginning. Said Salomon, “We are tirelessly thinking about ways we can improve coffee brewing. Stay tuned for lots of new ideas we are working on in our lab to reach the market.”

And who’s servicing these things? They look awesome but I’m the event of repair?