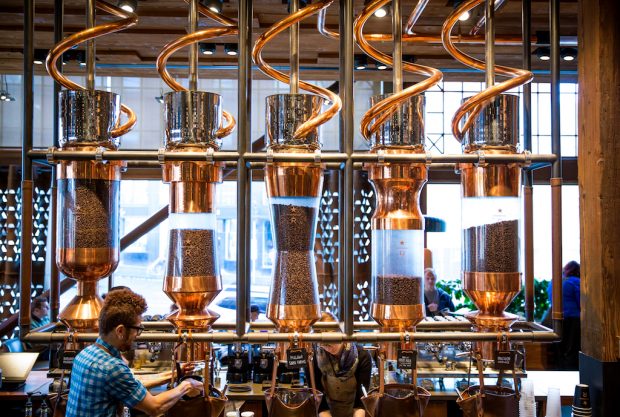 Starbucks has announced plans to open its first international Reserve-brand roastery and tasting room in Shanghai, China. The company said the interactive production roastery and retail environment will open in late 2017 as part of the Taikoo Hui Project, an in-development retail, office and hotel complex in one of the world’s busiest shopping destinations.

The announcement comes less than two months after the company announced plans to build its second Reserve roastery and tasting room in New York’s Meatpacking District, which it said would be even “bigger and bolder” than the flagship Seattle Reserve roastery that opened in Seattle in December 2014 — and they’re getting bigger every time. While the Seattle facility occupies approximately 15,000 square feet, the New York facility will take up some 20,000, and the Shanghai will top that at 30,000 square feet.

“China represents the most important and exciting opportunity ahead of us,” Starbucks Chairman and CEO Howard Schultz said in the announcement. “As our first international Roastery, we will take even bolder steps to make this Shanghai location our most stunning store, while making it completely unique and relevant to the Chinese customer.”

For what it’s worth, Schultz also said that the roastery environment “honors coffee innovation as a modern day Willy Wonka experience,” although, presumably, without chocolate river drowning fatalities or candy-inflicted bodily blueberry explosions.