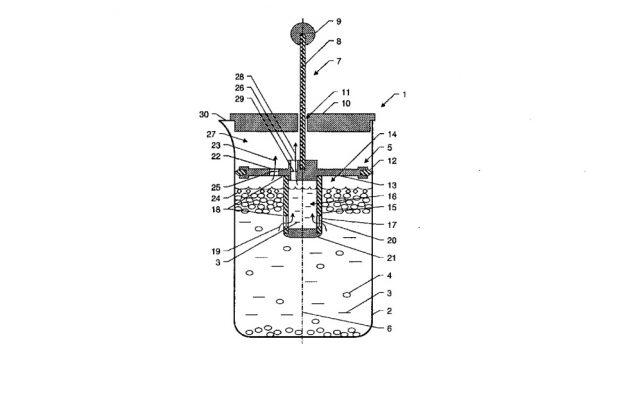 The lawsuit filed in a New York district court claims that Simpli Press is violating a patent held by Espro for its French Press-style brewer. The company is seeking a court injunction, as well as compensation for legal fees and other financial difficulties suffered as a result of the alleged violation, according to the suit.

“As a fellow entrepreneur and Kickstarter success story, this is the last course of action I ever wanted to take against another start-up brand,” Bruce Constantine, president and co-founder of Espro said in a press release issued by the company yesterday. “As leader of this thriving young business, it is my job and my obligation to protect my company’s reputation and investments, the jobs of ESPRO employees, and the innovative technology we have worked so hard to perfect.”

The suit claims that a representative or representatives of Espro observed a prototype of the Simpli Press at a coffee industry trade show in September of last year, and established email contact with Simpli founder Jennifer Morse on October 30, 2015, to “express concern” over possible patent infringements.

The Simpli Press, which won 3rd place for “Best New Product” at the Coffee Fest trade show in Portland last fall, was the subject of a successful Kickstarter campaign that launched on May 18, 2015, and concluded in June 2015, with 1,525 backers pledging a total of $150,160 to help bring the product to market.

Two days before the launch of the Simpli Press Kickstarter, an attorney representing Espro sent a letter to Morse restating the company’s concerns. A response filed by a lawyer on behalf of Made Simpli said the company was “investigating the matter,” but Espro says no further contact was made, according to the suit.

Jennifer Morse told Daily Coffee News today that her company is currently reviewing the “sudden blow” of the lawsuit and reviewing next steps.

“All I can say is that prior to filing our patent – we did a review on Espro’s patent with the attorney who filed for our first patent,” Morse told Daily Coffee News via email. “They did contact us again prior to Kickstarter and we did a thorough formal review of the patent they brought to our attention with the attorney we are working with currently on our IP. He as well did not find an infringement on any of their claims.”

Morse further described the news of the lawsuit as “heartbreaking” on a personal level. Wrote Morse, “We are, like them at one point, a startup from trying to raise enough money for manufacturing thru Kickstarter and now just trying to bring our product to market.”

I suspect we’ll see more of this as everyone strives to re-invent the wheel.