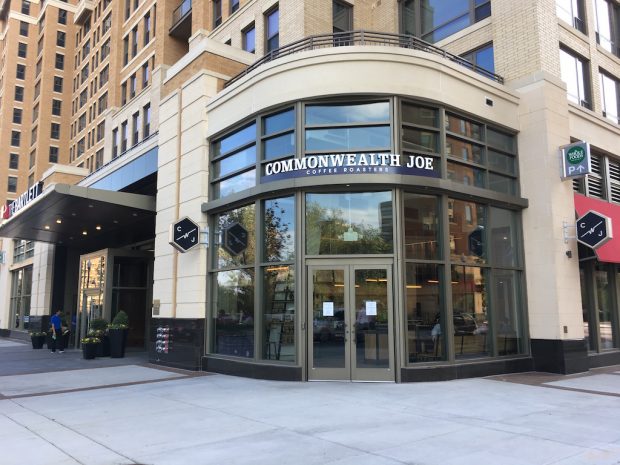 The four-year-old Washington D.C.-area roasting outfit Commonwealth Joe has opened its flagship retail bar inside The Bartlett building at 520 12th Street South in Pentagon City, with a dual emphasis on education and preparation at the highest levels.

Commonwealth Joe CEO Robert Peck and COO Chase Damiano recently told Daily Coffee News that despite clear interest in specialty coffee and upscale environs among  young professionals moving into the Arlington neighborhood, including into the massive Bartlett building itself, coffee options to this point have been limited. 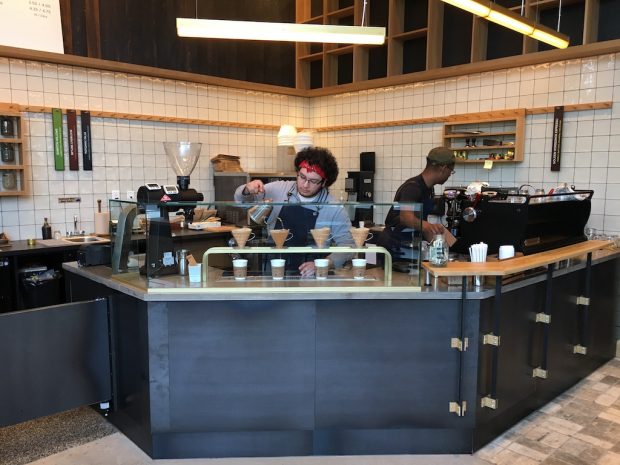 So the Commonwealth Joe team along with local architecture firm Core set out to create a space that was warm and inviting, while also transparent at every step, from the spacious, open bar to a glass-enclosed cupping and community room.

“Obviously we have to have a coffee bar, but second to the coffee bar we said we must have a tasting room. We built a cupping room in that shop and planned the shop around that cupping room,” said Damiano, adding that the room will be used not only for staff and wholesale training, but also for community programming, tastings and classes. “We wanted it to be glass-enclosed because we want people looking in there when the curtains aren’t shut. We want them to be curious.” 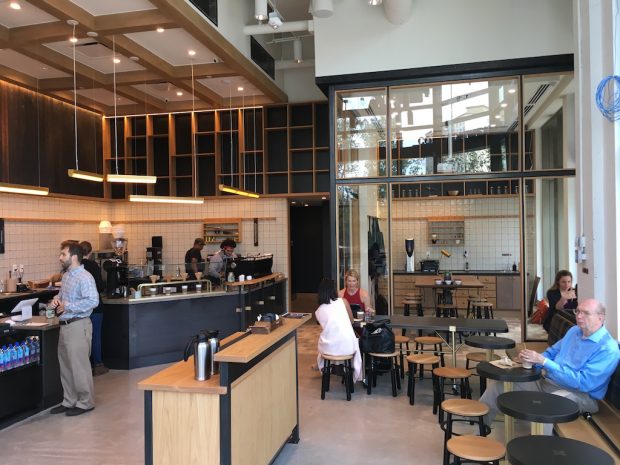 The glass-enclosed tasting room on the right side of the frame.

The bar itself currently boasts a three group Synesso MVP, while a Slayer machine may soon be on the way, with Mythos Clima Pro grinders for espresso, Mahlkonig EK43s for the pourover station, and a Ditting grinder for batch brews. Brass tubes add some visual refinement while encasing multiple tap lines for cold brew, the market for which was tested by way of three nitro cold brew bikes rolled out this past summer.

“We started riding these bikes around, and people started saying, ‘Man, I wish I could have this in our office everyday,’ and we said, ‘You know what, we think we can make that happen,'” Peck said, adding that the experiment led to a host of new wholesale accounts while also justifying the company’s expanded forays into the category.

There are now six taps dedicated to a variety of cold brews, offerings include multiple single-origin options served in snifter-like glasses to promote more of a craft-beer-like experience. Said Peck, “We have some people on the team now, who are full time, on salary, and all they do is brew cold brew.” 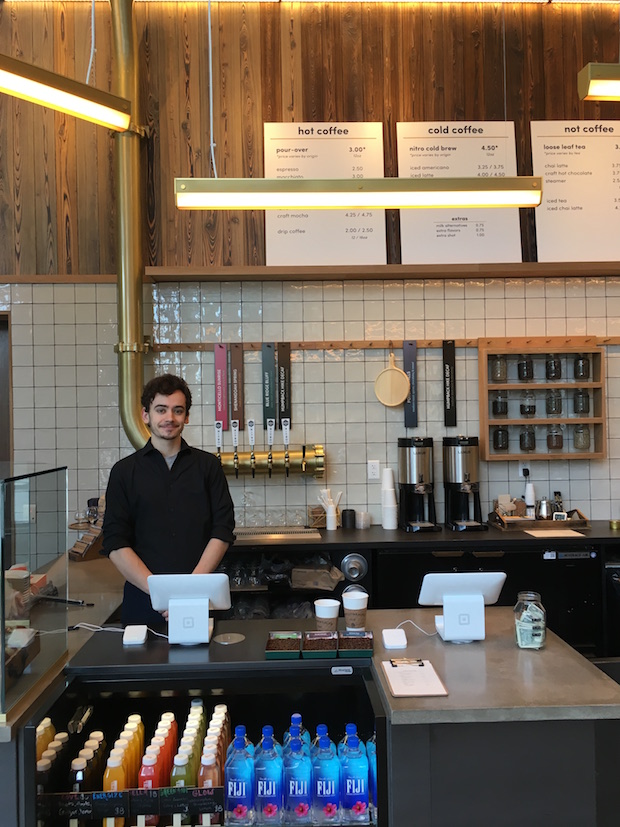 All of Commonwealth Joe’s coffees come from the production headquarters in nearby Culpeper, Va., where Peck’s mother, longtime commercial roaster Julia Peck, watches over a Diedrich IR-12, with coffees sourced from a number of importers big and small. “We’re roasting more and more every week,” said Robert Peck. “We’re realizing we may need to get another smaller roaster or scale up to a larger one.”

While Commonwealth Joe has been operating the longtime Arlington Café Java Shack since Dale Roberts decided to sell, the opening of a shop under the company’s own name also provided an opportunity to rethink packaging and branding. Damiano and Peck said they’re big fans of the SCAA’s revised coffee tasters flavor wheel and associated sensory lexicon, and strove to incorporate similar elements into the packaging. 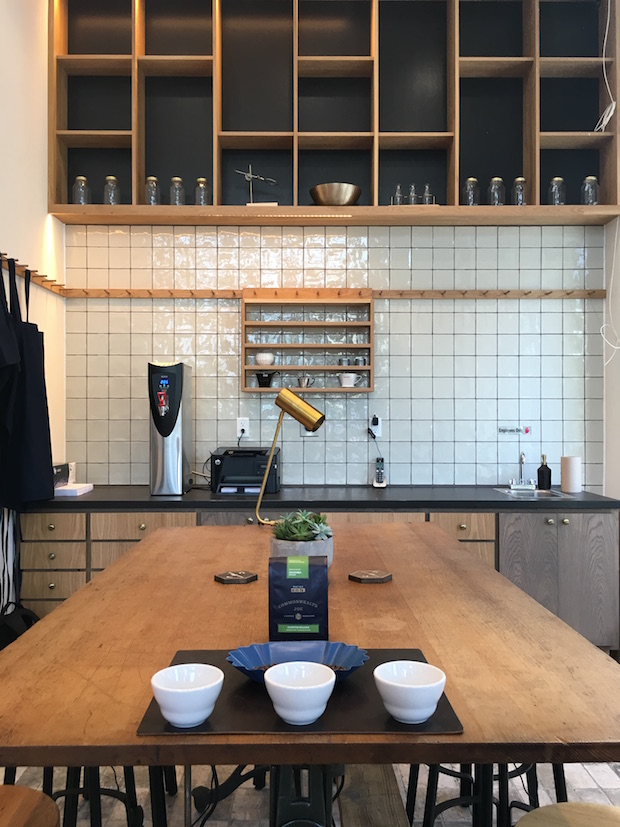 Inside the tasting room.

While primarily focusing on single-origin offerings, the CJ team decided to forego simply naming the coffees by their farm or region of origin, and give them locally relevant names — such as Monticello Sunrise or Shenandoah Spring — that can be associated with various colors and flavor notes to establish a deeper sensory connection with customers. Said Damiano, “For a coffee professional, you can read that and ascertain certain properties that are relevant, but for most people that information is lacking, and it could lead to potential for confusion.”

Peck added that the company is rolling out packaging that includes a custom hexagon design that borrows from six main categories in the SCAA wheel, as an attempt to further visually engage and educate customers. 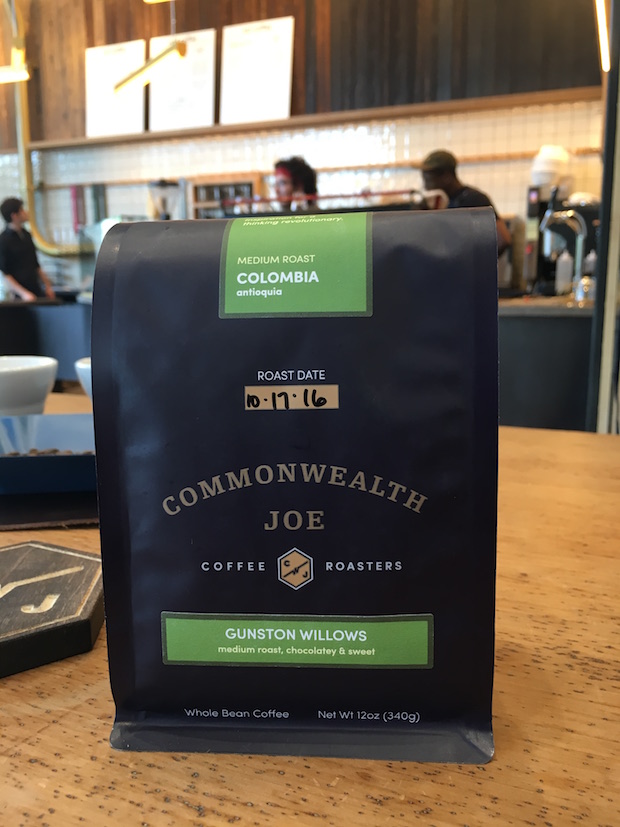 After a few weeks of soft-opening at first just to residents of the Bartlett, Commonwealth Joe celebrated an official grand opening for the new shop late last month — a significant milestone for a small-batch roasting company that has taken a slow and steady approach to growth. Said Damiano, “This is the first launch we’ve done, so we’re trying to be excellent with everything.” 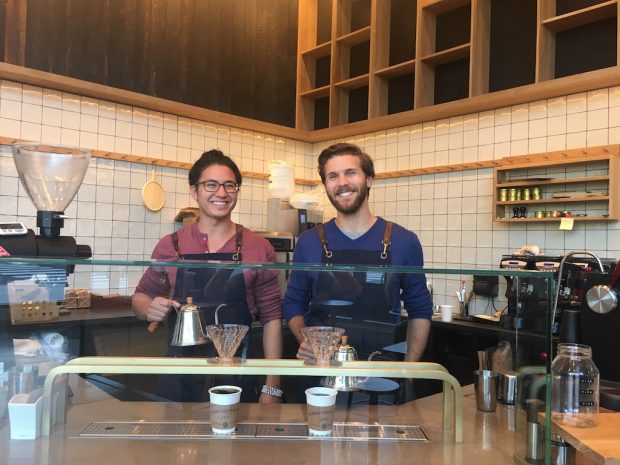 Thanks for this information. Good work, keep sharing.