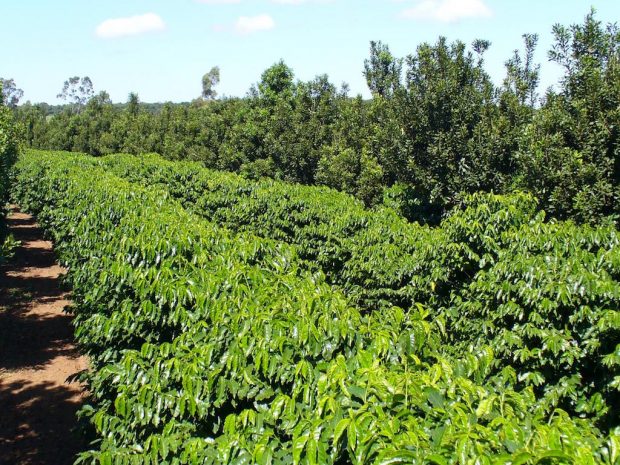 After an eight year study, researchers in Brazil say they have found a “perfect marriage” by intercropping coffee trees with macadamia trees, the latter providing an ideal amount of shade, improved soil nutrients and an additional revenue-bearing cash crop.

Rogério P. Soratto and Marcos J. Perdoná, of the Department of Crop Science at São Paulo State University and São Paulo Agency of Agribusiness Technology respectively, framed the research in relation to climate change, citing evidence that many Brazilian coffee plantations are and will continue to be suffering do to increased temperatures.

“Farmers have tried to lower the temperature for coffee plants by intercropping them with shade trees. But so far, they haven’t been very successful,” the researchers said in an announcement of the study, which has was just published in the peer-reviewed Agronomy Journal. “The trees provided too much shade and competed with the coffee plants for nutrients. The farmers lost money because they didn’t produce as much coffee.”

Rather than starting with existing coffee farms, the study created one from the ground up, intercropping Arabica trees with six different types of macadamia trees, while leaving one coffee field as a full-sun monocrop. Over eight years, they measured plant height, canopy cover from the taller macadamia trees, and the yields of coffee and macadamia nuts.

“We had to adapt and create new managements specific to the intercropping conditions,” said Soratto. “The goal was to enhance cooperation between the species and reduce the competition between them.”

The researchers found the best results with HAES 816, a Hawaiian macadamia variety with a smaller canopy that they say competes less with coffee for nutrients while still providing adequate shade cover as well as the best market opportunities as a cash crop. They found that the combination of coffee and HAES 816 provided an economic benefit that is 178 percent higher than coffee alone.

In addition to citing the potential economic benefits, the research team also noted improved soil fertility that could potentially increase yields with fewer chemical inputs, plus a potential for the reduction in water pollution and a reduction in the greenhouse effect due to larger trees and shading.

I wonder, will the coffees from that area perhaps absorb some macademia-notes. or in general, do coffee berries absorb flavour notes from the plants they share soil with?