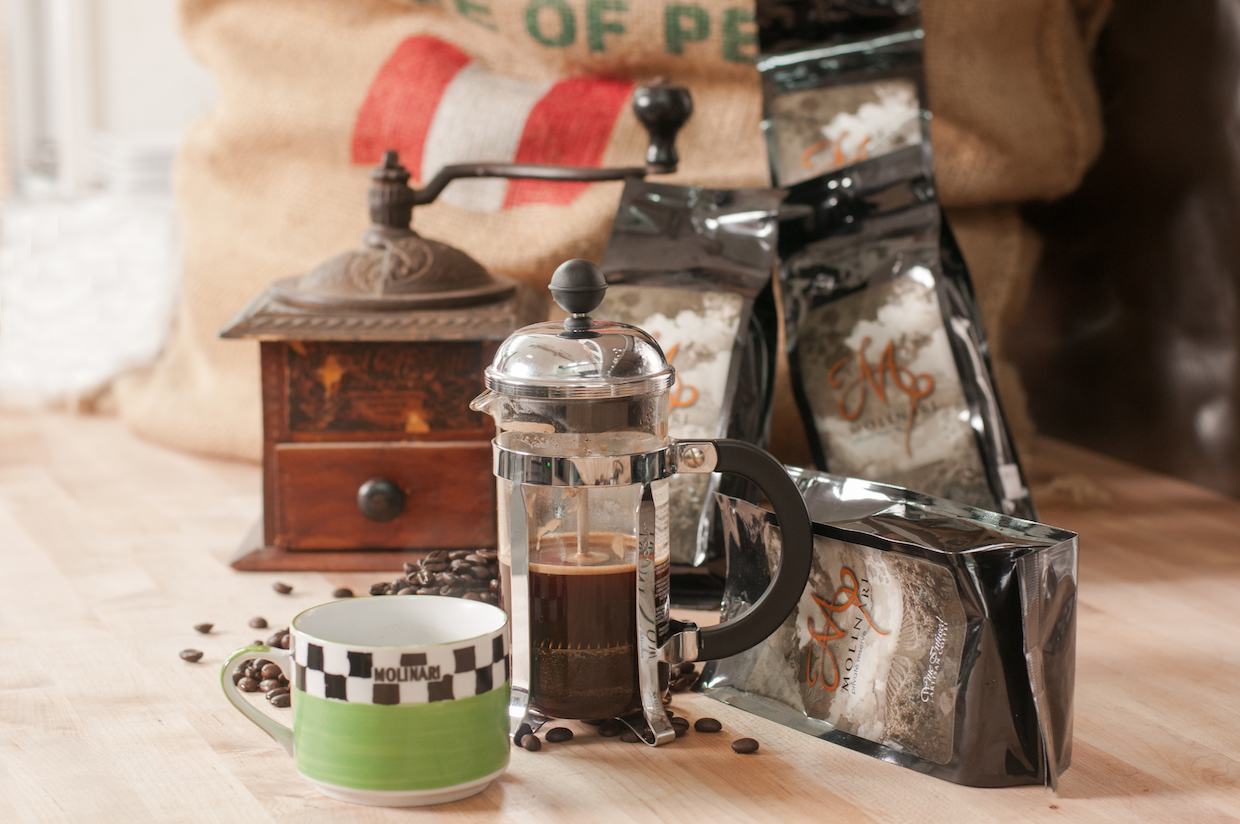 A new wine-infused coffee called Molinari’s Private Reserve has inspired headlines aplenty across the web in recent weeks. Onlookers from the specialty coffee community that are familiar with the current trend of barrel-aging greens might assume that this is more of the same, yet the infusion involved in Molinari’s Private Reserve is actually its own unique practice.

Molinari’s Private Reserve takes the act of pre-roast flavoring an innovative step further by actually soaking green coffee in a bath of red wine, allowing the beans to fully absorb the liquid before being dried a second time prior to roasting.

The act of storing green coffee in spent wine or spirits barrels to subtly impart the coffee with the aromas and notes of the barrel’s prior content is also a relatively recent spin on adding flavor to coffee, which reached the mainstream when Starbucks earlier this month unveiled a whiskey barrel-aged coffee at select locations.

While it remains a territory that much of the specialty coffee community either treads very carefully upon or avoids altogether, some well-respected and intensely quality-driven roasters have engaged and experimented with barrel-aging, including Portland, Ore.-based Water Avenue Coffee, Patrick O’Malley’s Infusion Coffee and Tea, Ceremony Coffee Roasters of Annapolis, Md., Idaho’s DOMA Coffee Roasters, and Chicago-based Dark Matter Coffee, to name a few. 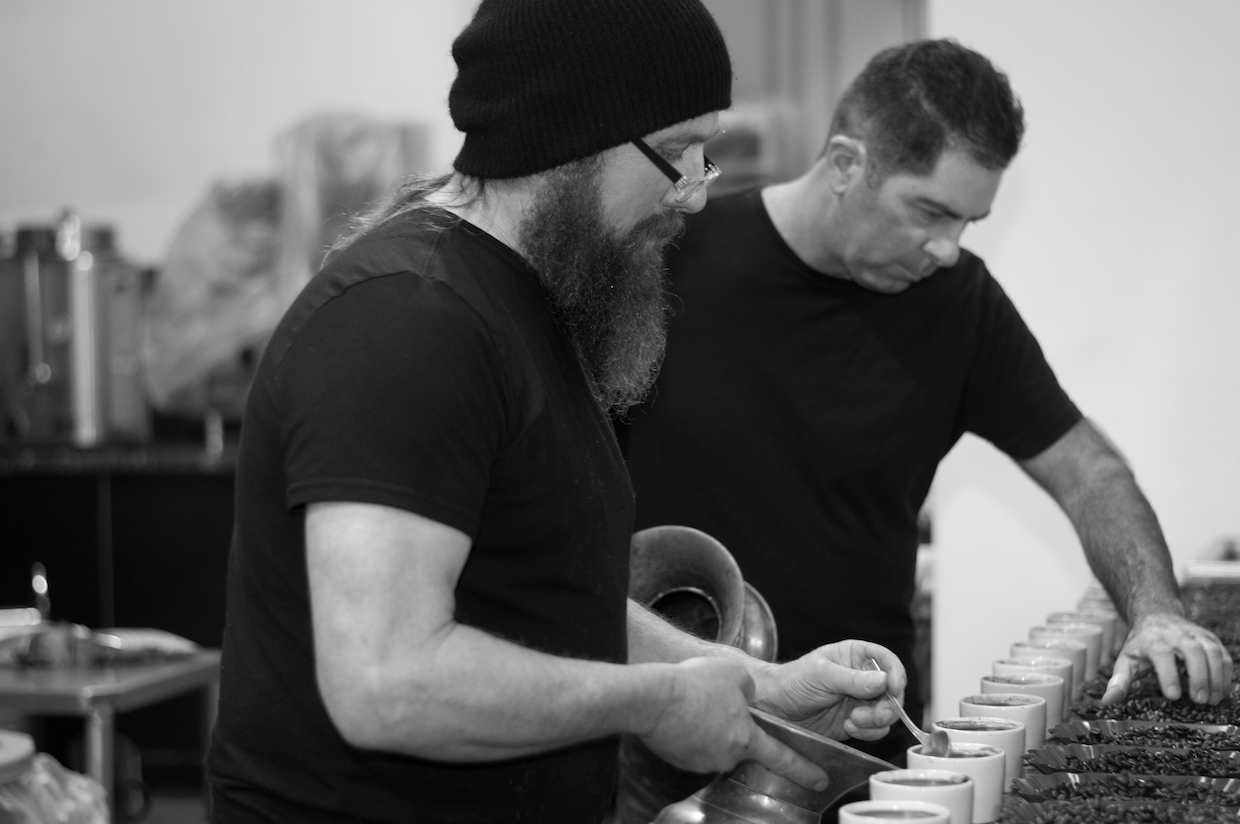 While certainly a more aggressive treatment yielding what’s reportedly a more robust result, the act of submerging green beans in wine is in principle no different than barrel-aging as far as adulteration goes, just as soaking and re-drying green coffee is no more physically disruptive than the widely embraced Swiss Water decaffeination process. In this case, John Weaver of Wild Card Roasters — the roasting partner that collaborated with Molinari’s Caffe on the private label Reserve offering — is not one that prides himself on adding unnatural flavors to coffee.

“We do not use flavoring. And we will never use flavoring. We’re coffee roasters,” Wild Card Roasters VP Renee Brown told Daily Coffee News, emphatically differentiating between Molinari’s Private Reserve and conventional (post-roast) flavored coffee. Both Brown and Molinari’s Caffe proprietor Rick Molinari pointed out that Weaver trained directly under Alfred Peet, and has for roughly 40 years been in the hands-on business of quality and craft of specialty coffee.

Rick Molinari, a lifelong resident of California’s Napa Valley, is himself steeped in the culture of wine and the culinary adventurism for which the region is known. When encouraged by Weaver to collaborate on a unique signature coffee for Molinari’s Caffe, the idea to somehow thoroughly suffuse coffee with the goodness of wine, while still allowing it be fully coffee, came to him, and it took nearly three years of R&D to determine the procedure that best achieved that goal.

“When it’s hot you’re going to get that coffee taste, but when it cools down it’s just like wine, it’s going to open up,” Rick Molinari told Daily Coffee News.

Molinari said that as he’s fortunate to count among his friends some of the more established names in the famous wine country — Pepi, Biale, Mondavi — he was able to sit down for extensive tastings and share ideas with highly skilled palates. He experimented with about 16 different wines in combination with single-origin coffees from a wide swath of origins both prominent and scarce before cracking the code. The red blend used for MPR is made especially for the project. 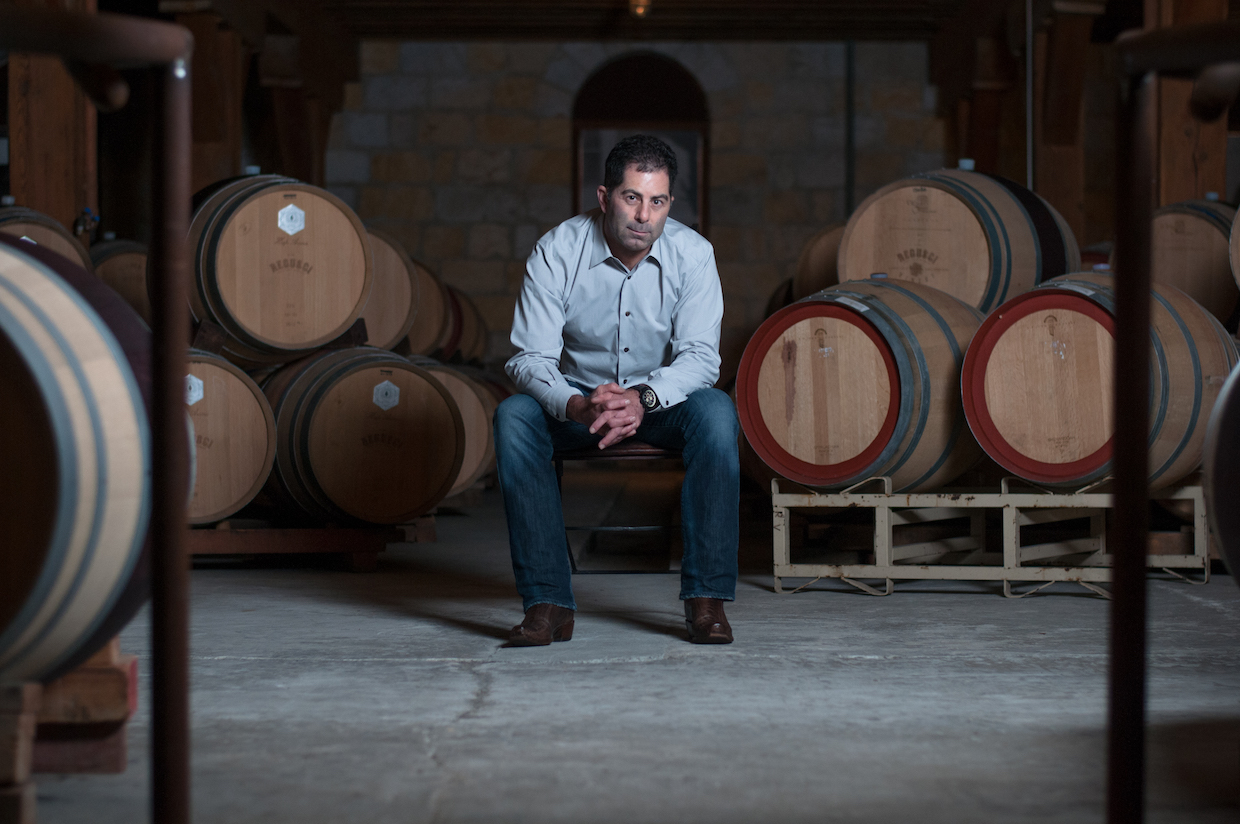 “What happens is the bean soaks up as much as possible. It fattens back up,” Molinari said of the process, the specifics of which are proprietary. “We let it sit for a certain amount of time, soak up the wine, dry out to a certain percentage, then we roast it.”

Molinari added that it’s a “normal” medium roast, and no sugars or alcohol remain in the finished product that he said shines via French press brew, does well in pourover, and makes a great espresso with a reddish-colored crema. Flavors also unfold fascinatingly through milk drinks.

The product was actually ready for production as early as 2014 but was set on the back-burner after magnitude 6.0 South Napa earthquake took a toll on his business and the community. Now MPR is out and has proven immensely popular, receiving substantial media coverage and selling out quickly. Molinari said that going forward they anticipate making potentially more than 1,000 pounds per week, with a maximum current production capacity of 50,000 pounds per month.

The idea is flexible also in terms of special collaborations with winemakers. For example Molinari has adapted the procedure for a limited edition project in conjunction with a special wine put out by Biale, for which Molinari went back to the drawing board to match the wine with an complementary bean and adjust the other variables for an ideally balanced result.

“I put their neck label on the bag,” Molinari said. “If people want to do something, I don’t mind doing it.”

In the meantime, MPR-inclusive projects could take any number of other forms as well, as interested culinary collaborators have swarmed as word and samples of the coffee have spread.  “A lot of my friends are chefs here, and my customers are chefs. They’ve done ice cream out of it,” said Molinari, adding that others have made chocolate coffee bars, drizzles, bon bons, a pastrami rub, and there’s a potential steak rub in the works. A recipe page will be added to the website soon. “There’s a lot you can do to it,” said Molinari.