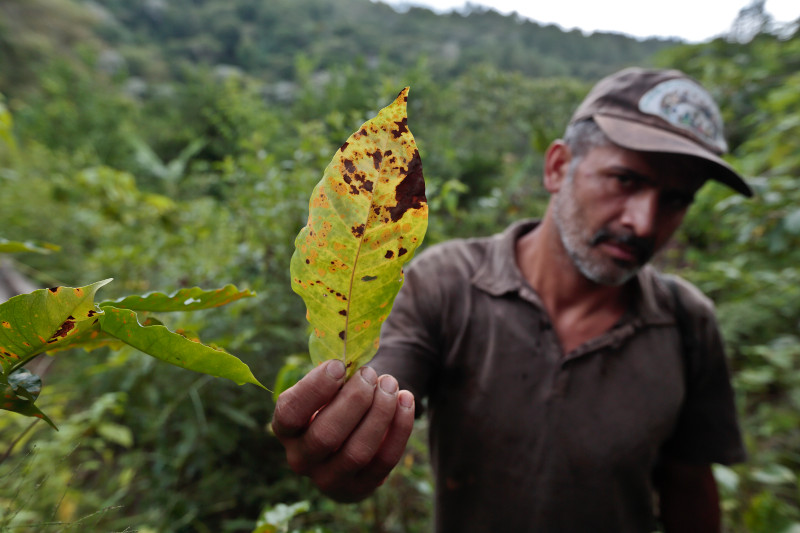 In the days heading into the SCA Global Specialty Coffee Expo, there popped up a bit of news out of Honduras that diverted my attention. As a true villain, it seems coffee leaf rust (a.k.a. la roya) just won’t go away.

Initial reports in late March said that there was an outbreak of rust in plantations in Olancho and other important coffee producing regions that are planted with catimores and sarchimores, both known as rust-resistant varieties. There were a lot of questions: Was the outbreak just on these varieties? Or are there other susceptible varieties nearby? Is this an evolution of rust? Are we dealing with a newer, resistant strain? There is a lot that we don’t know.

Let’s go back a few years to the last big outbreak, the 2012-2013 harvest in Central America and its aftermath. States of emergency were declared. Famine watches were started. The recovery was a long, slow process, with a huge emphasis and investment of time and money on renovation with rust-resistant varieties. This new news potentially jeopardizes all this prior investment and work and underlines the fact that this current outbreak is really just another battle in the long war involving the co-evolution of pests and hosts.

“We have to learn how to co-exist with this disease,” says Mario Ordoñez, who is the assistant technical director at the Honduran national coffee institute IHCAFE, and who has been a key regional resource in battling and recovering from the last outbreak.

Presently, over 70 percent of the coffee acreage in Honduras is planted with resistant varieties such as Lempira, Parainema and IHCAFE 90. The wide reports of rust on farms with resistant varieties has triggered a rapid response. Spores were collected then tested on leaves of the mother plants for these rust-resistant lines. The leaves became infected and IHCAFE believes that the current resistance from these lines has been broken — in other words, that the rust fungus has evolved and is infecting catimor and sarchimor varieties previously thought to be resistant.

“We need to help farmers invest into their farms with the basics — pruning, fertilizing, fungicide applications,” says Ordoñez. “That is what is needed to prevent a larger outbreak.”

Of the 125,000 officially registered coffee farmers in Honduras, over 95 percent are considered small farmers with less than 5 hectares. While that makes it easier to control an outbreak on a smaller area, small farmers lack the financial resources to make all of the critical investments. Meanwhile, IHCAFE is working on a strategy that will help create an early warning system while promoting the good agricultural practices on farms that help contain and control the fungus.

“Coffee leaf rust science is still in the dark ages,” Tim Schilling, the executive director of World Coffee Research, told me over the phone. He cautioned me that IHCAFE’s work is a great start, but more information is needed to conclusively say these varieties are now susceptible and that the rust has evolved.

Are the varieties affected true to type? What do we know about the rust? Schilling said that WCR has received the leaves from the infected plants and is currently working on genotyping these plants to make sure that they are truly the varieties that they are stated to be and to make sure that the variety’s resistance hasn’t broken down. WCR will issue a more formal statement in the weeks ahead, as they know more and can share some concrete information.

But the most disturbing part of our conversation came when we started talking about coffee leaf rust. Said Schilling, “We, as a coffee sector, have not yet characterized coffee leaf rust on a genetic level.”

As matter-of-factly as Schilling puts this reality, it’s actually astounding. We live in a world where you can take a Q-tip swab of your mouth, put it into a plastic tube, mail it off and you can get your full genetic profile. When my wife and I adopted a street dog from Mexico some 7 years ago, our vets gifted us a DNA profile test. With a few drops of blood, a company can tell you which dog breeds your mutt is most genetically similar to. Yet, we still lack the basic genetic tools to be able to distinguish strains of coffee leaf rust, the most important pathogens for our sector, and one worth $225 billion dollars in economic activity in the US alone. This seems like an urgent need for our sector — a no-brainer.

In the meantime, farmers in Honduras and all over Central America need to be vigilant and to keep investing in maintaining a healthy and productive farm. Ordoñez is right: Coffee leaf rust isn’t something that we eradicate and forget. Rather, we need to recognize that it will continue to evolve and our challenge is to continue to innovate and find new tools and techniques to reduce its impact, and to learn how to co-exist with this pathogen.

The future of arabica coffee may depend on it.