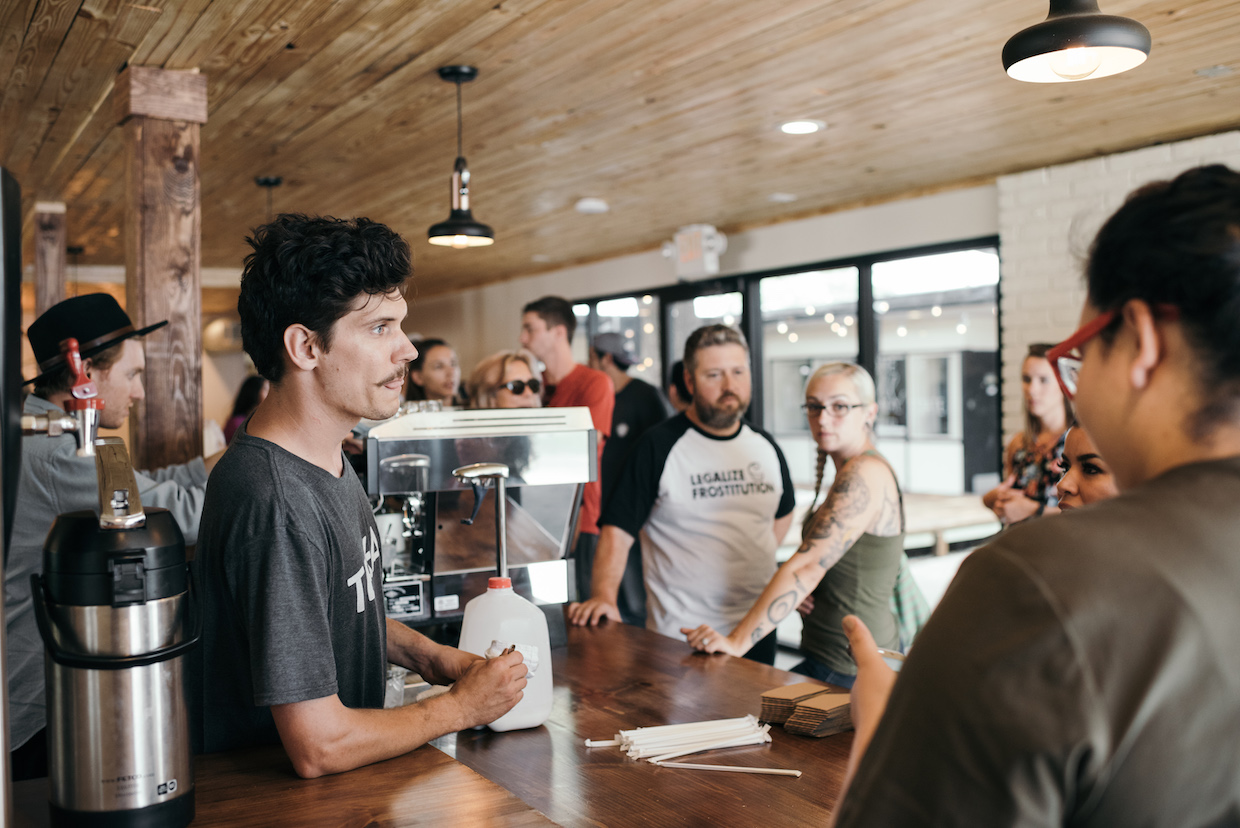 When Pinewood Coffee Roasters moved out of its previous retail space a few months ago, the company effectively hurled itself into a period of retail limbo that was consumed by the buildout of a new public home. Earlier this month, the central Texas roasting company sunk deeper roots with the opening of a new flagship cafe in Waco.

“It’s rare that a contractor and his entire team will stay at a place for 18 hours at a time,” Pinewood Co-Founder Dylan Washington told Daily Coffee News. “There were times when our team and his team would spend all night working on something together, putting a ton of sweat equity into this place. It was a lot of hard work; a very cool experience.” 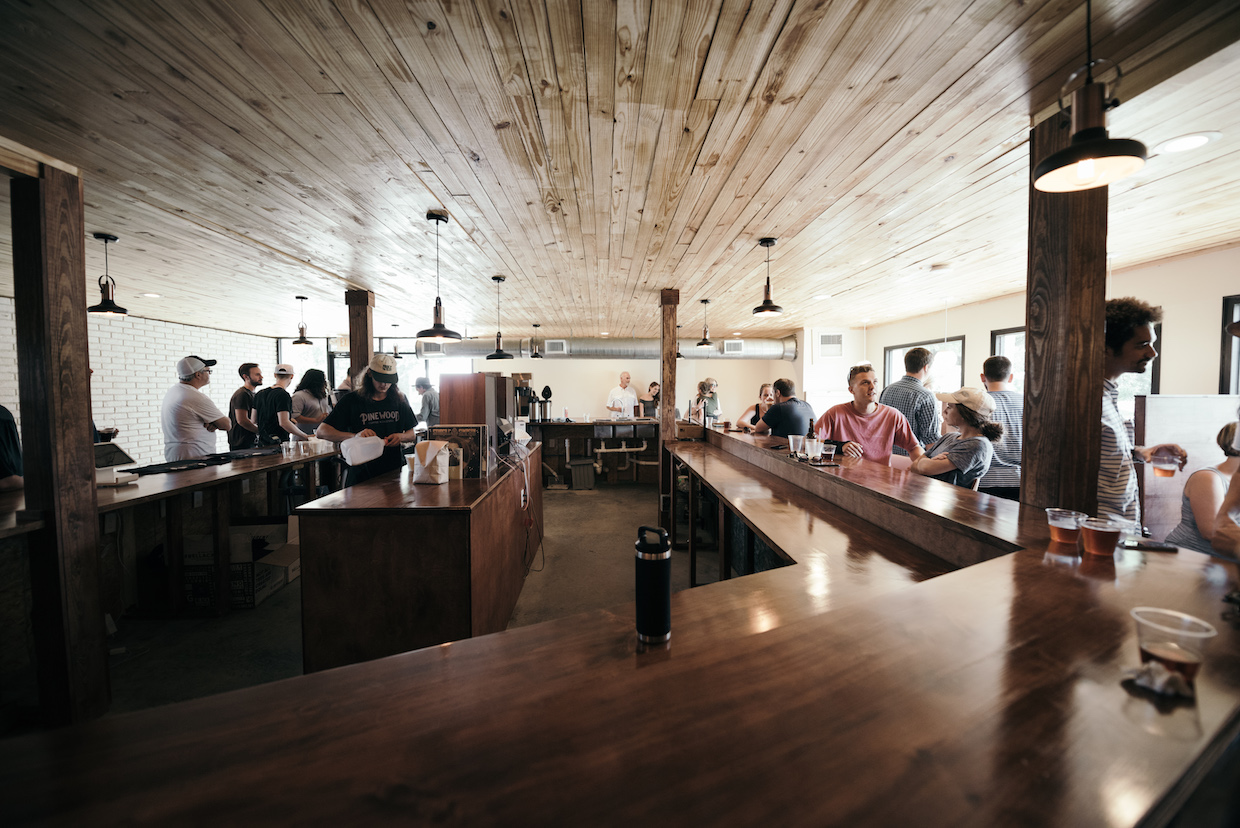 For the build out, the company partnered with the youthful local firm E2 Creative. Washington said the average age on the worksite was 23, and that the energy and enthusiasm made the “do or die” situation actually fun.

The result is a warm and carefully crafted interior featuring, of course, an abundance of pine surfaces and fixtures. Apart from the custom mid-century-style booths made of birch, pine is the only wood indoors, offset by egg-shell-white walls. Shading an outdoor patio and performance space, a massive live oak spreads its limbs over seating and a stage area where live music will regularly take place.

Roasting on the company’s Diedrich IR-12 now occurs in the 1,200-square-fooot suite next door to the 1,800-square-foot café, and the company intends to eventually install some windows to visually connect the two spaces. Once carried to the bar, fresh goods are ground by a Mahlkonig K30 and EK43 for extraction on a brand new 2-group La Marzocco Linea PB or single-group Fetco XTS, respectively, with Chemex as the slower manual brew option. Yet not a droplet hits a bean without first passing through Pinewood’s Optipure reverse osmosis system. 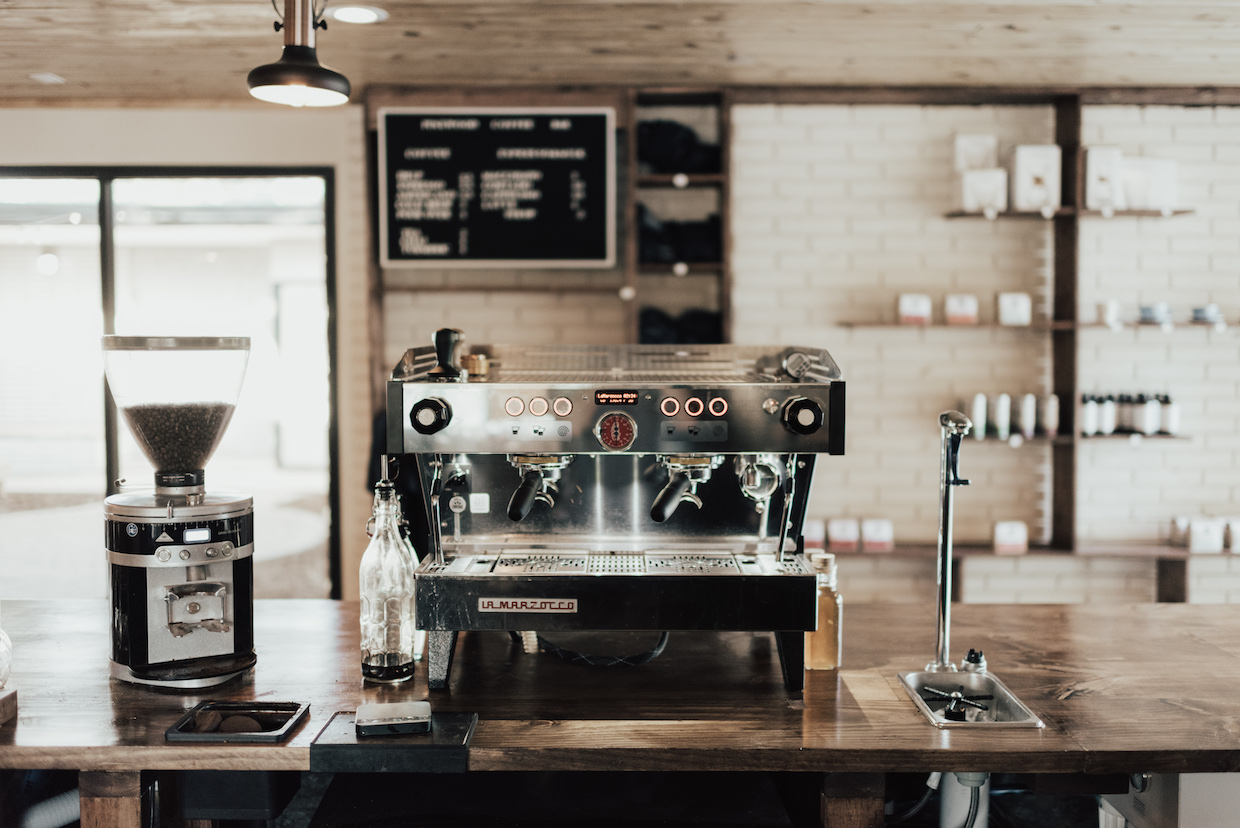 “Waco water sucks. It’s disgusting,” said Washington. “Historically, we’ve filtered it through the lake. Our reservoir, I remember in 2011, we had a really bad algae bloom, so the water smelled and kind of tasted like algae. So needless to say, get yourself an RO system if you’re in Waco.”

“You can talk to 50 different people about water, and they’ll all say something different about it,” added cofounder John David Beard. “We’re really starting to get into water recipes, and trying to figure out exactly the best water to use with our coffee, or how to roast our coffee to our water.”

Pinewood’s water is reduced to near-total purity and then remineralized to a level that hovers around 80-100 parts per million, of a precise mineral makeup established with the help of recently hired Pinewood Head of Coffee Mikey Power. Power, a recent transplant to Waco, came to Pinewood by way of an Oklahoma City location of Octane Coffee and then OKC-based companies Clarity Coffee and Elemental Coffee. 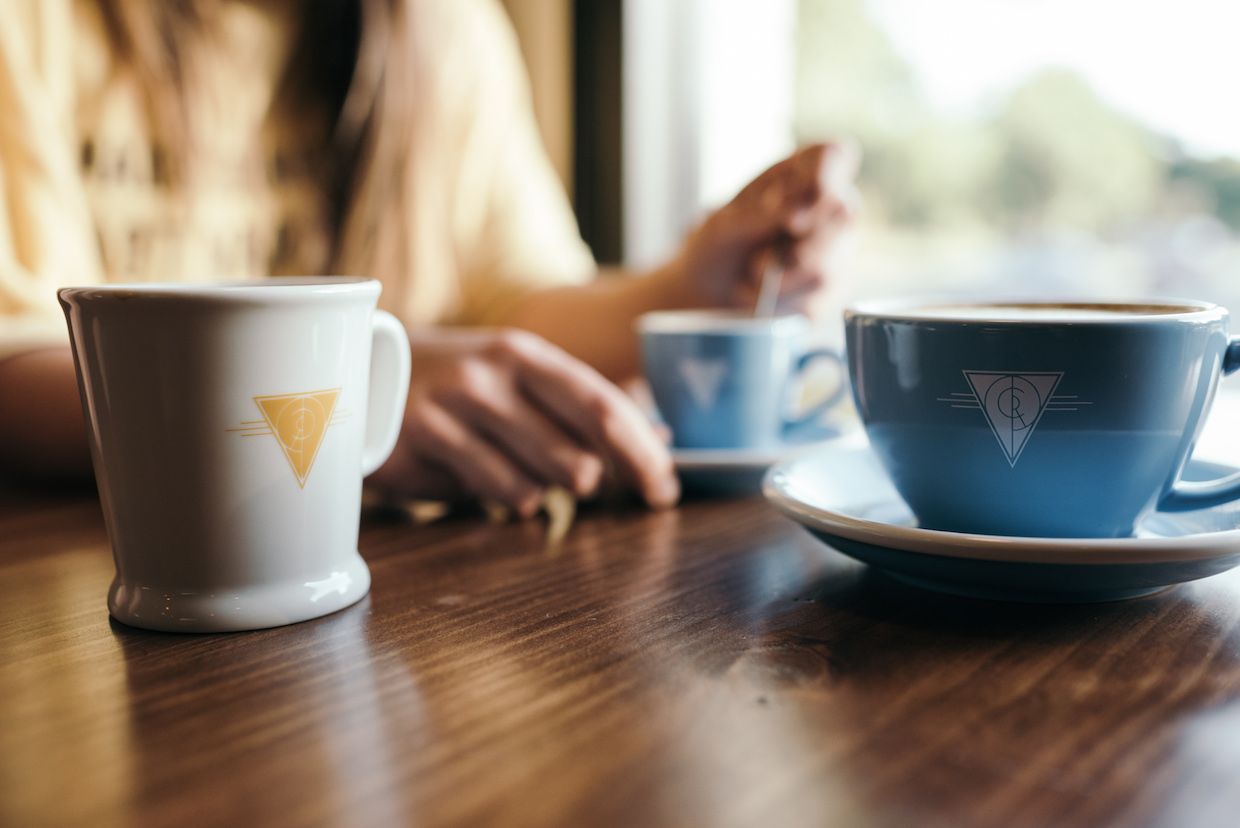 Washington and Beard agree that between Power, the RO system, the brand new Linea PB, and progress in their craft that has lead them into more of a pursuit of balance and sweetness, Pinewood Coffee has never tasted better.

“Maybe at the beginning we were like, ‘Man, this is so cool, we’re gonna roast super light coffee, make it as wacky as possible,’ but we grew out of the stage pretty quick,” said Beard, who thinks that not only does flavor and approachability benefit but extractions are easier to dial in and keep consistent with a roast that is, while still on the lighter side, just slightly less so.

And with this comfort and confidence in their roasting and brewing, the Pinewood teams intends to encourage gastronomical exploration at the bar, where Washington said they intend to reserve 10 seats on occasion for presentations of molecular coffee experimentation. 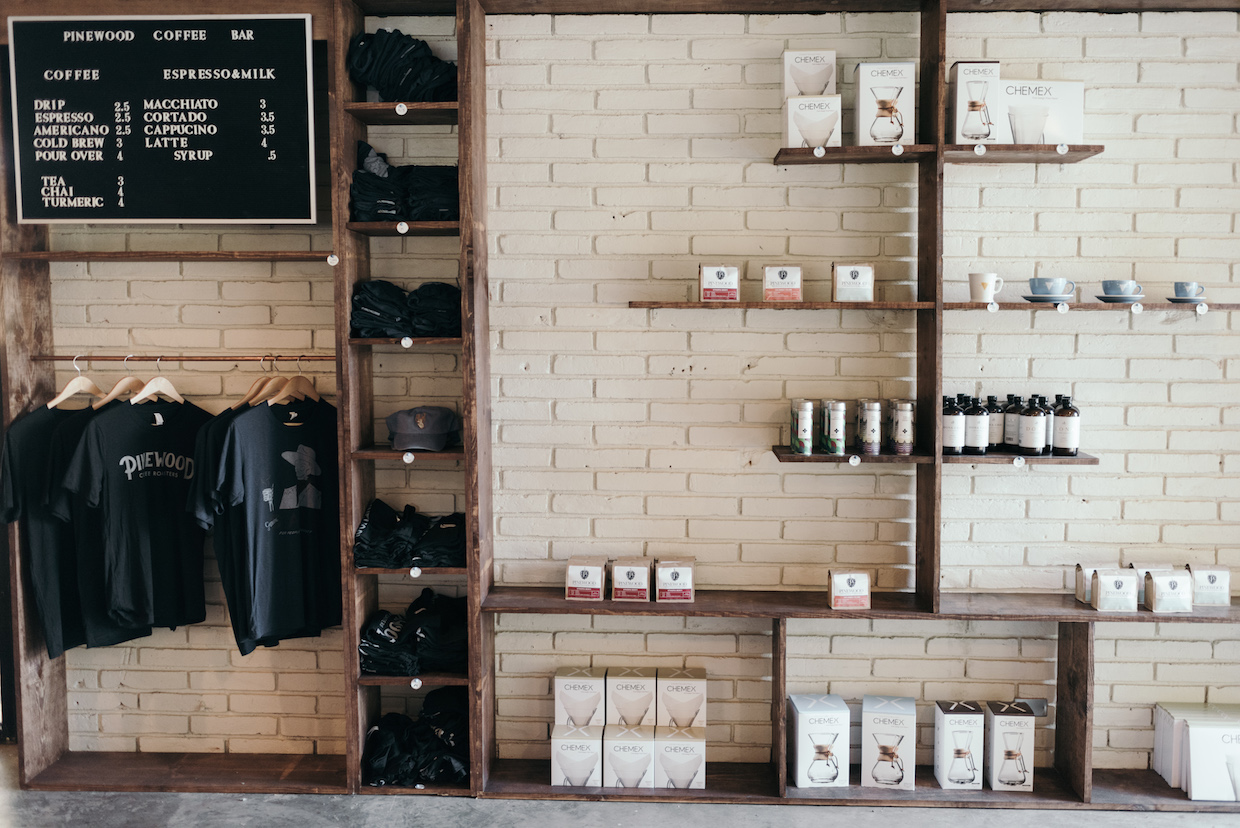 One such idea involves the application of tapioca maltodextrin to cold brew. “We want to take cold brew and turn it into a coffee powder that melts on your tongue, and then trick people into believing that we’re setting them up to brew their own pourover, but then they’ll actually eat what looks like the grounds, and it tastes like cold brew,” said Washington with a laugh, though he was not kidding. “We want to offer new things, and be exploring new things.” 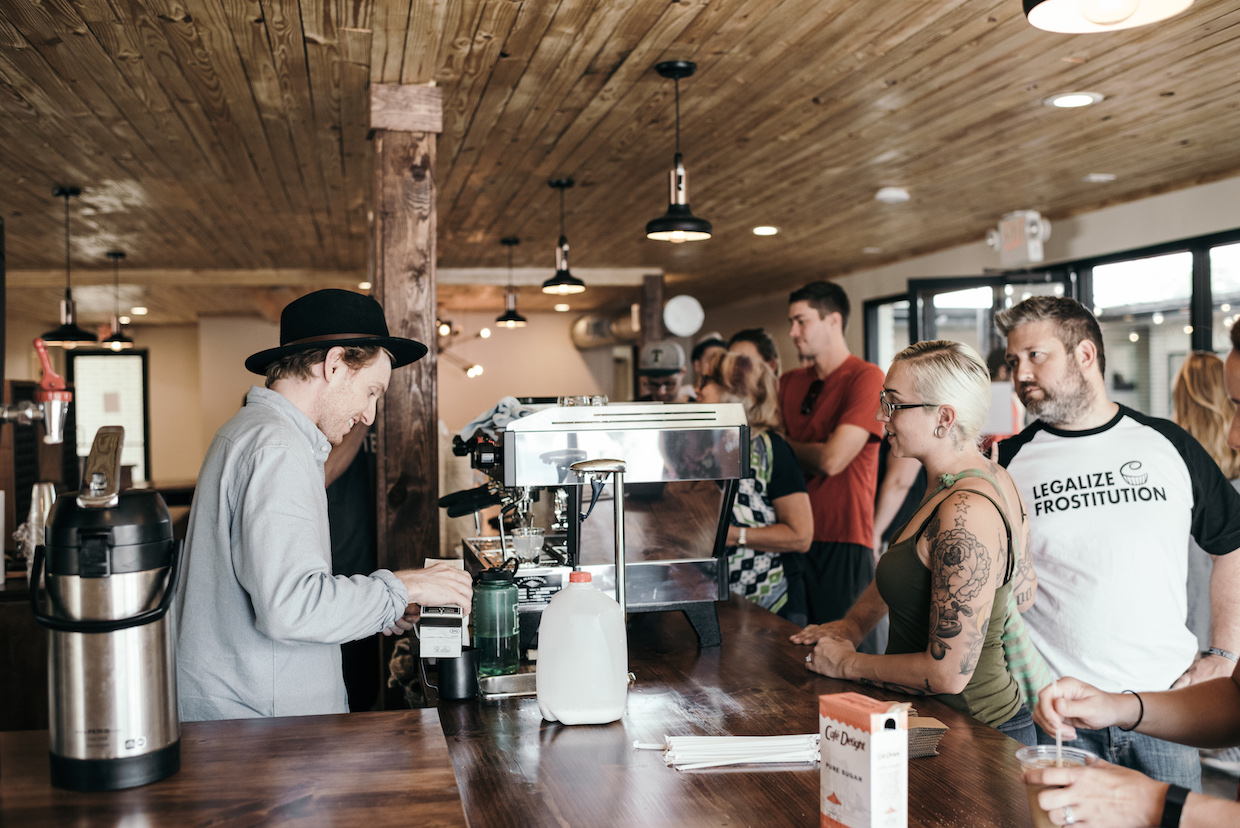