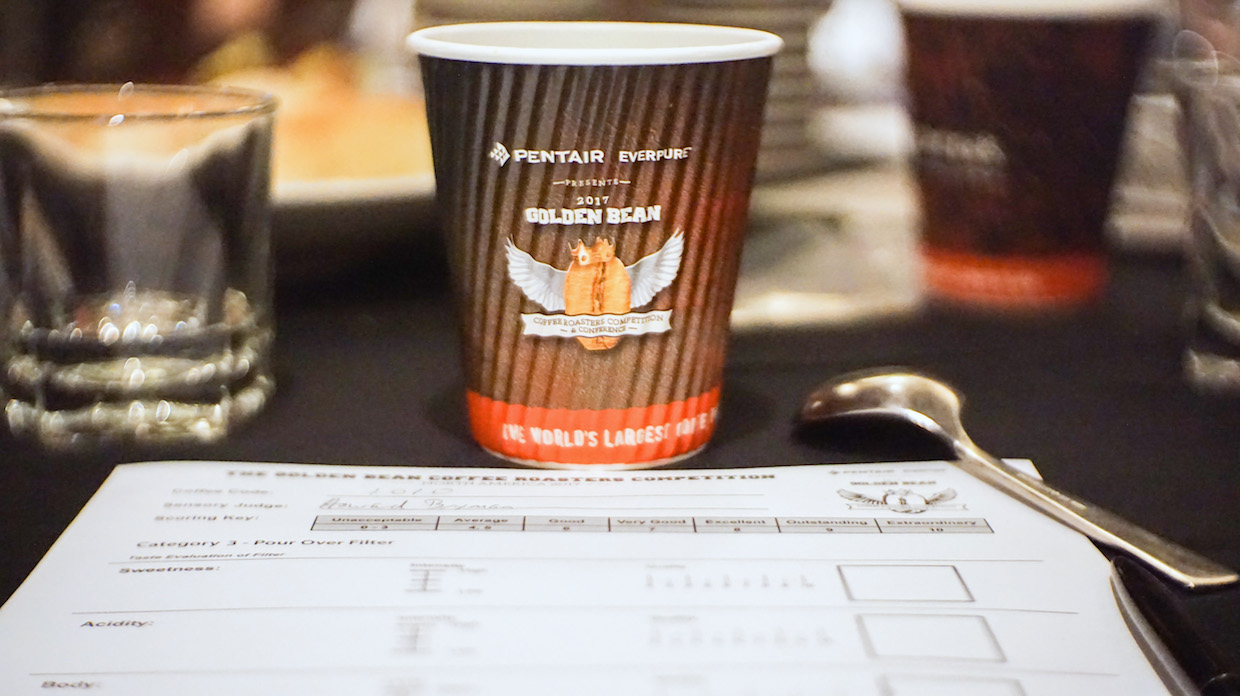 The third annual Golden Bean North America coffee roasters competition and conference took place in Portland, Ore., last week, with approximately 830 coffees in the mix for top scores in 10 categories. More than 120 attendees leant their palates and perspectives to the task of tasting and scoring each coffee in areas including acidity, sweetness, body, and balance, in between various seminars and social events.

New to the challenge this year was the top prize eligibility requirement of competitors to submit high-ranking coffees into each of three main divisions — straight espresso, pourover/filter, and espresso-based milk drinks — with top honors bestowed upon the highest aggregate scorer. 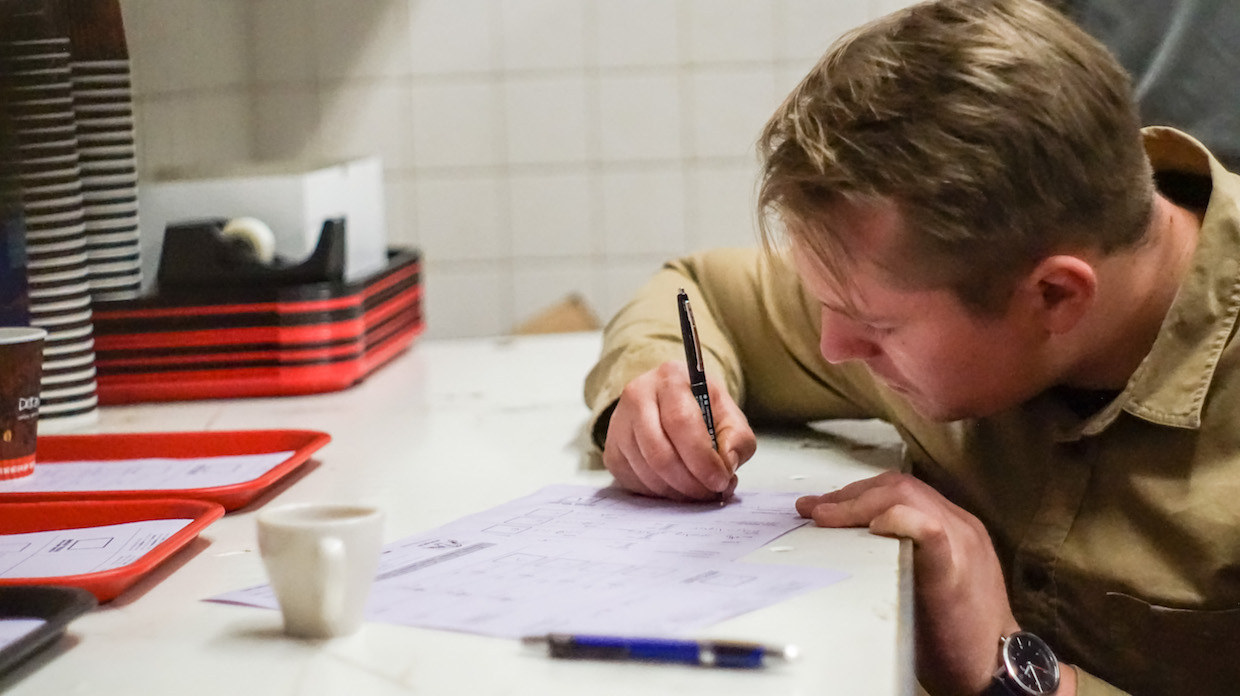 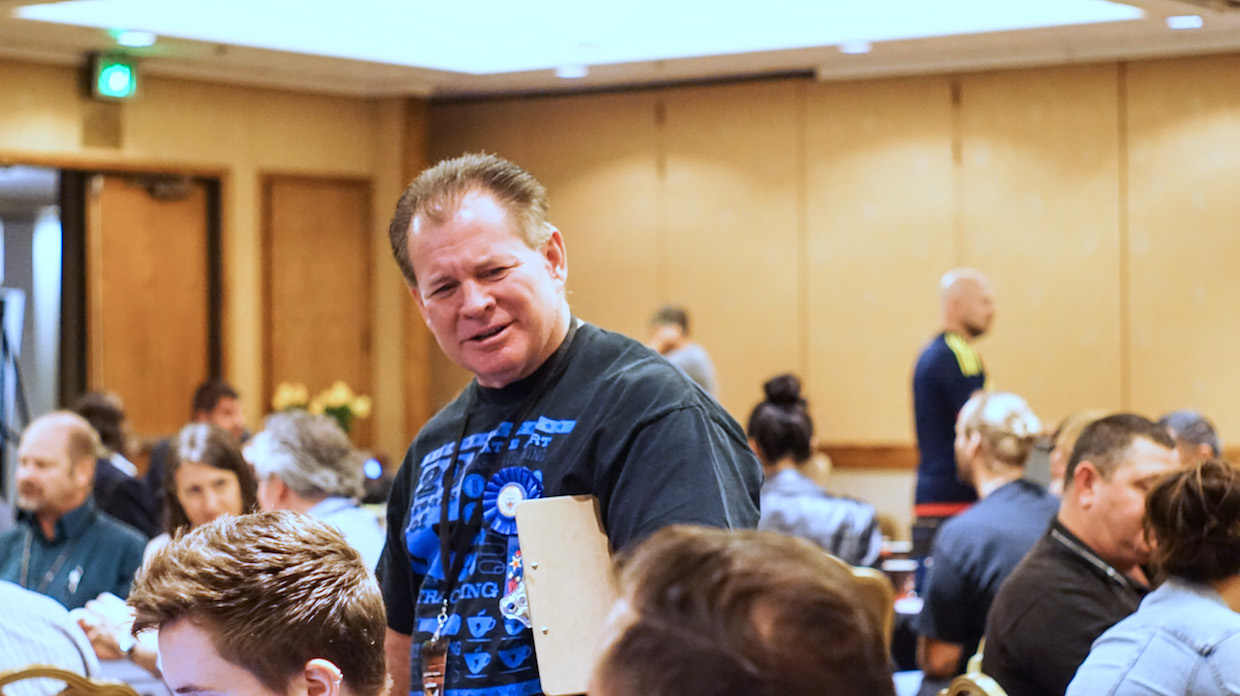 Klatch founder Mike Perry was on hand as an official judge this year, assisting in calibration and in evaluation of category finalists. “So many baristas win these great trophies. It’s nice to see the roaster recognized and get something cool,” said Perry, whose daughter, Klatch Coffee Vice President and Director of Training and Consulting, Heather Perry, is a four-time regional and two-time United States Champion barista.

Grand prize winners this year receive not only the “champion” distinction for marketing purposes along with a trophy handmade by tamper craftsman Reg Barber, but also a ticket along to origin trip provided by green coffee import company Genuine Origin. Gold medalists received prizes in the form of water filtration equipment from sponsor Pentair Everpure. 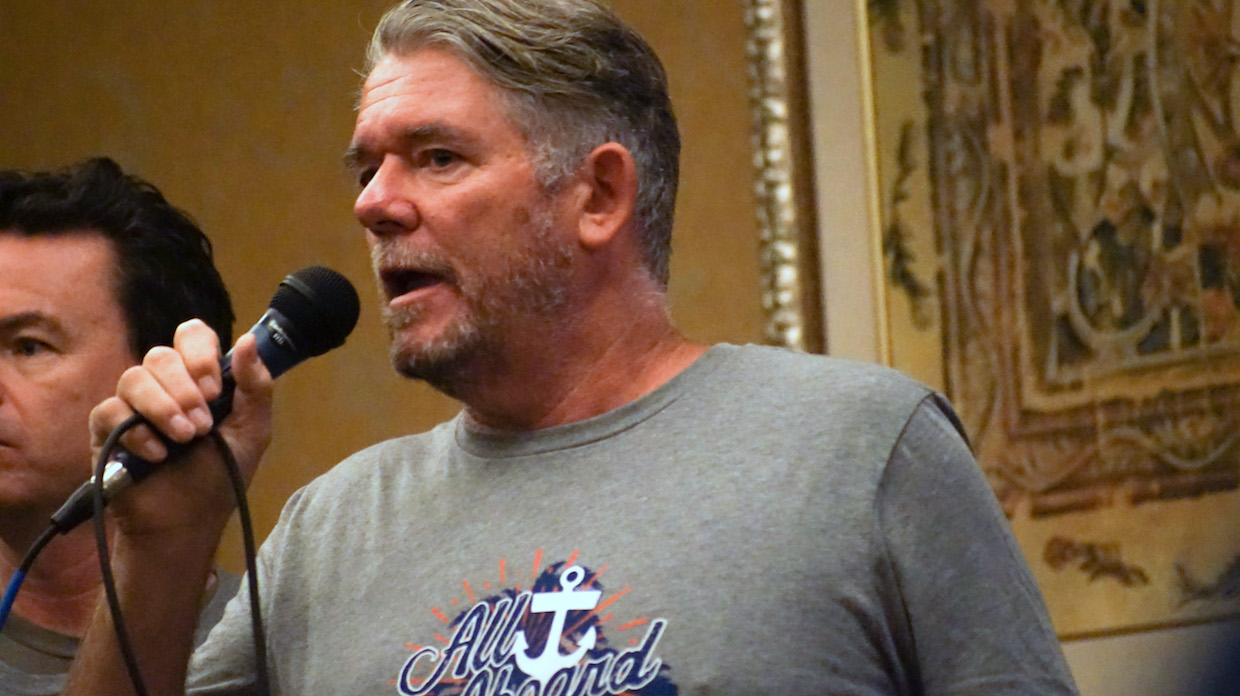 Contest participation increased this year by roughly 20 percent over last year according to Golden Bean founder Sean Edwards, who said that while attendance to the event itself was also up this year, he doesn’t expect physical turnout to really take off until the contest and the benefits of its awards have had more time to sink into North American coffee culture.

“Until we get about five or six years into this event, it’s always going to be a problem getting people to commit to four or five days to become judges,” said Edwards. “But once they come, we’ve got them forever. They become part of the group.”

All filter coffees for the competition were prepared on a fleet of Behmor Brazen brewers, with inventor and company founder Joe Behm on hand to oversee the operation. 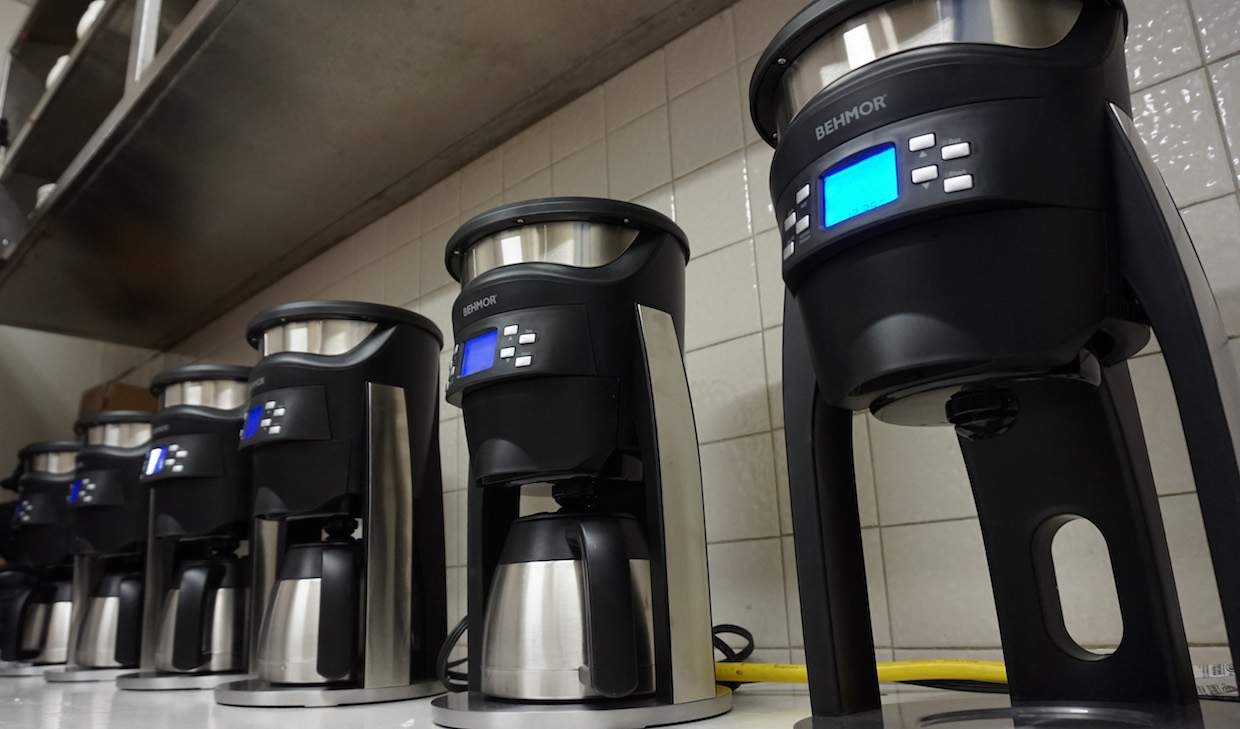 “It’s taken us five or six years to find a system that really works well,” Edwards said of Golden Bean filter coffee practices, adding that last year was the first year the contest included a filter coffee category, utilizing Behmor Brazen brewers for that event as well. “We love the Behmor because it’s quick to use, it’s quick to set up. A lot of the bigger commercial brewers are good for doing big volumes but not for doing quick turnaround.”

Straight espresso and espresso-based milk drinks were prepared on a pair of Rancilio Classe 11 machines, and ground by Mahlkonig EK43. Ironically, while both the Brazen and the Classe 11 offer deep suites of extraction profiling controls over such parameters as time, temperature and in the Rancilio’s case also pressure, for the purposes of fair competition all coffees were prepared on a single, straightforward profile, parameters for which were made public to the entrants. 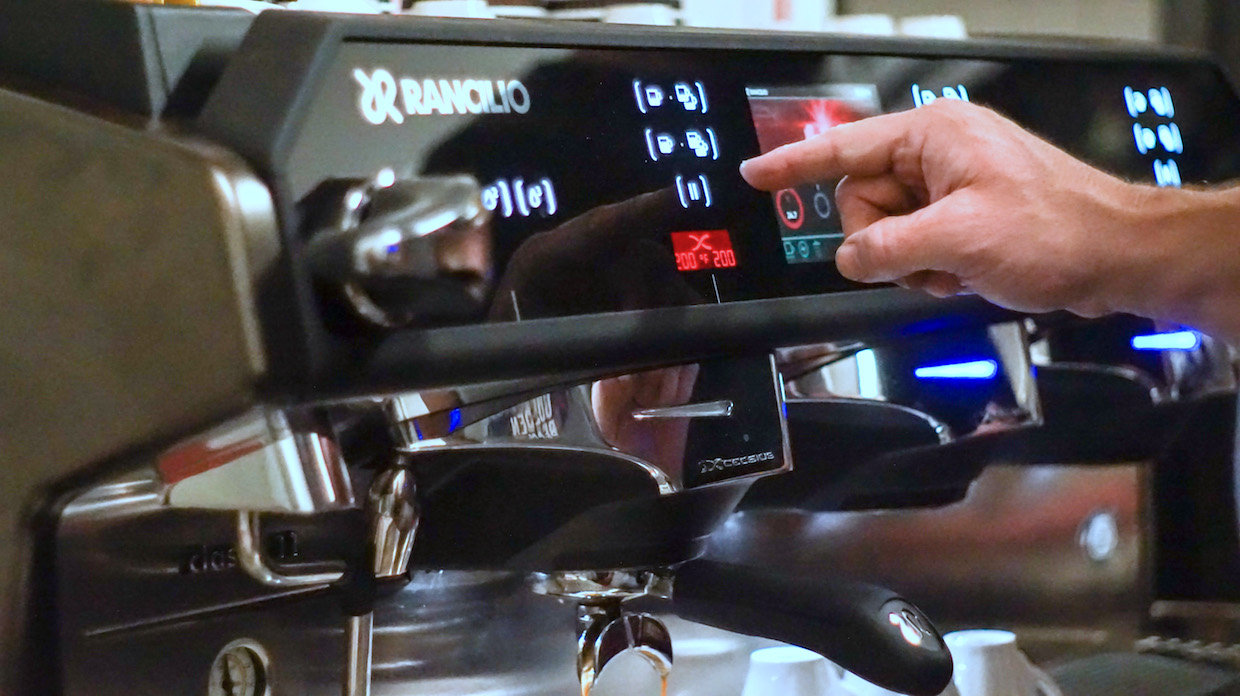 Café Culture International Barista Trainer and Consultant Luke Shilling served as head barista in the “engine room” this year, organizing a team of skilled baristas to rapidly dial in hundreds of anonymously packaged coffees for peak presentation, within the given parameters.

Additionally, Pentair Everpure spent six months developing the water formula for competition, according to Edwards. Water standards for Golden Bean competitions currently adhere to World Barista Championship water standards, although this could change as the event evolves in keeping with progress in flavor science, water purification technology, and evolving industry standards. Said Edwards, “For years they’ve all been about protecting the equipment, which might not have been the best formula or recipe for coffee.” 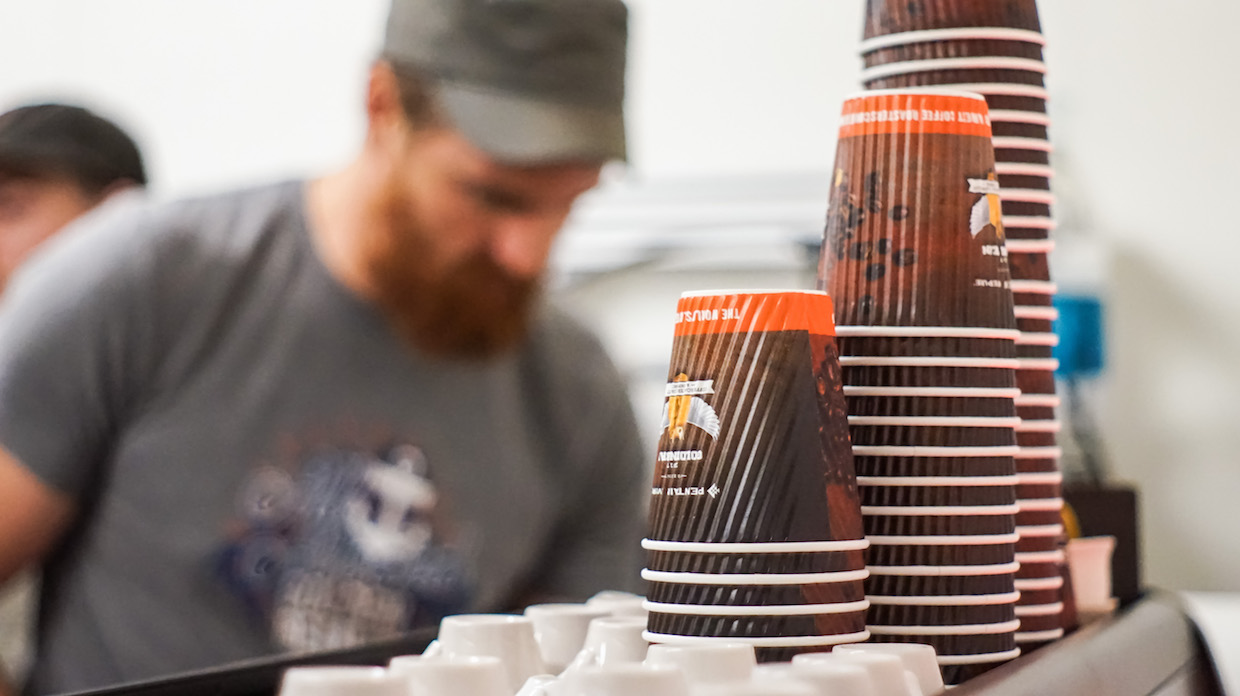 The Golden Bean Hall of Fame Inductee announced at the event this year was Steve Lanphier, whose decades of experience as a roaster, trainer and green coffee seller have seen long stretches at companies including Portland Roasting Coffee and more recently BECCOR, working with producers on improving quality while facilitating trade directly from Brazil to roasters.

Lanphier was present and in good spirits to receive the honor, despite being two years into a battle with liver cancer. A GoFundMe campaign is currently active online to raise funds for his continued treatment. 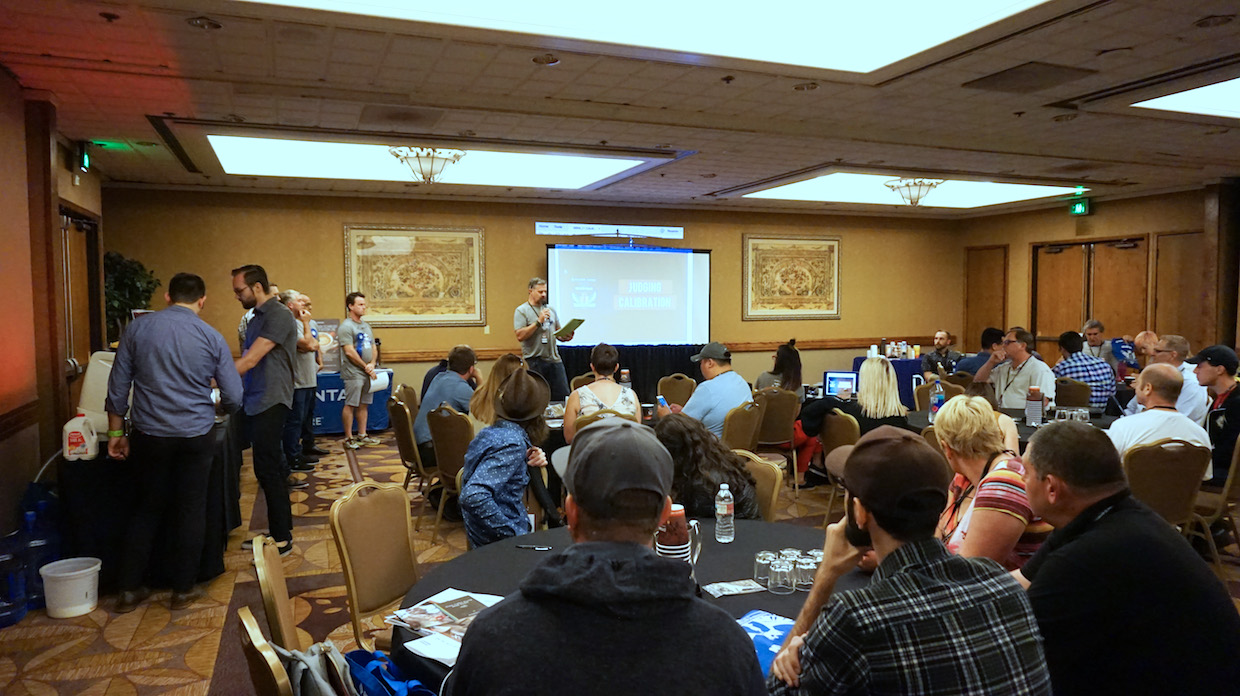 The Golden Bean contest has been occurring in Australia for 12 years. With three years now under its belt in its first overseas expansion here in the U.S., the contest is poised to expand yet again to a third country on a third continent, preparing to launch in Brighton, England next year, potentially with a medieval theme with a castle as the venue.

“Brighton is more similar to the Australia market. Sixty percent of the coffees drunk in the U.S. are still filter coffees,” said Edwards, noting that the filter category received about 300 entries in this year’s U.S. competition, constituting over a third of the entire contest, whereas other regions around the world are far more espresso-focused. 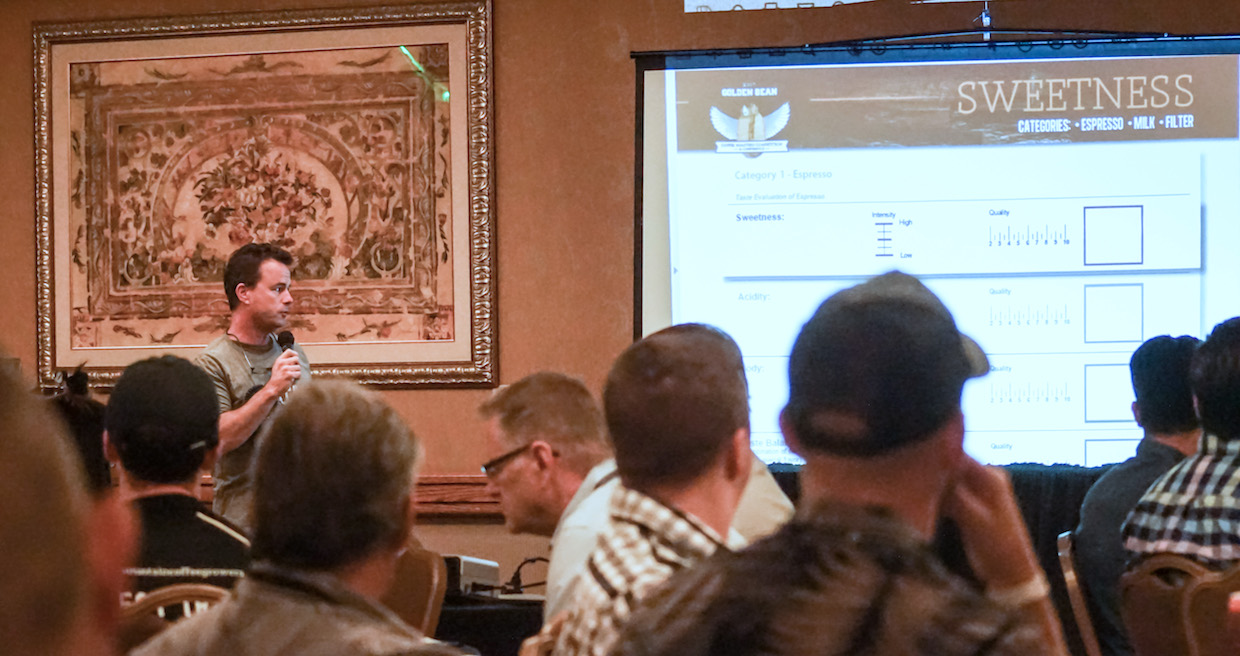 Edwards said they’ve also applied for trademarks in Southeast Asia, in hopes of getting a Golden Bean event off the ground there within the next year or two, either near the Café Culture office in Shanghai or somewhere in Korea or Japan. From there, the ultimate goal, said Edwards, would be to organize a “world playoff” of Golden Bean gold medal winners from around the globe.

“I think that’s where it’s going to go,” said Edwards. “We’ll narrow it down to find the best roaster in the world. A grand prix.” 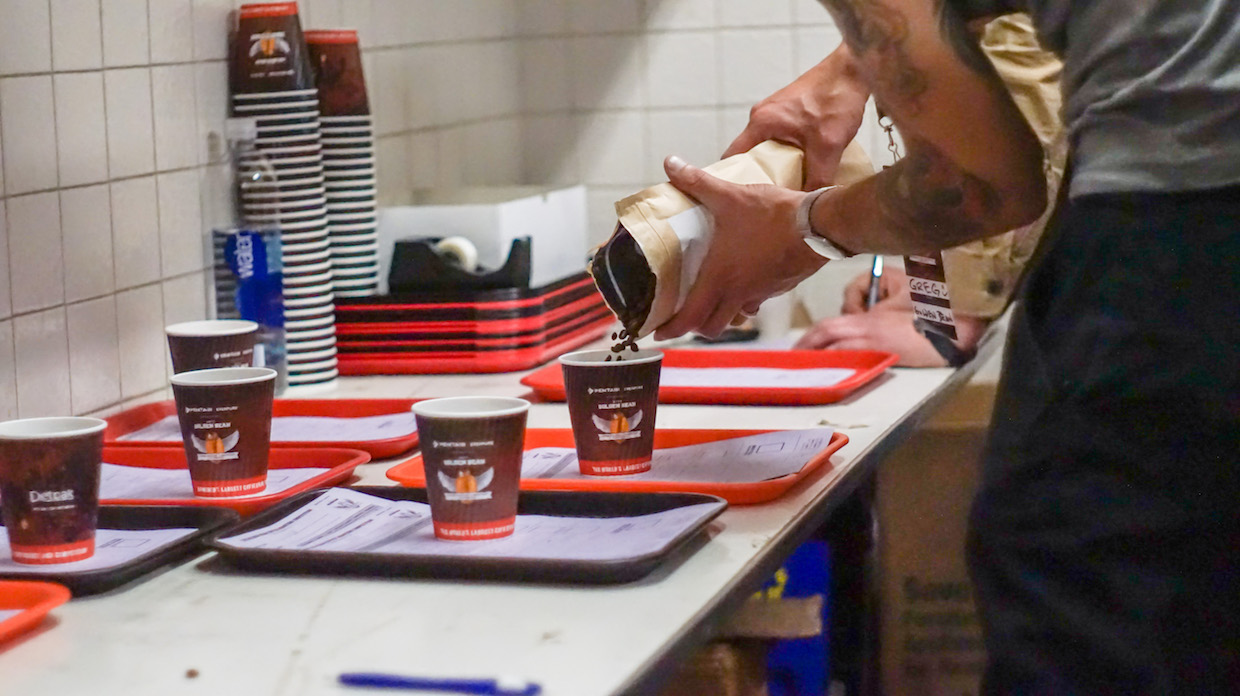 A complete listing of Bronze, Silver, Gold and Overall winners is posted on the Golden Bean North America Facebook page.

Oh lord, looking through the list of overall winning coffees….Ethiopians usually….boring ya’ll….come on industry people….is that the only weapon you have???

Love the way this event is developing, i hope you keep supporting it, it is a great showcase for us the tiny little guys in the specialty coffee industry: my farm is 30 acres in a high corner of the Dota/Tarrazu region and my mill processes 200 pounds of cherries per hour. Rio Prince, the roaster entering our beans works on a 6 kg machine. 🙂

The results that we have had so far are making us very happy: last year we got 2 bronze medals in Espresso and one Silver in Latte with two entries. This year we got a Silver Medal in the Latte category with a single entry, our Villalobos Varietal. We are definitely happy and looking forward to our upcoming harvest so we can participate again next year.