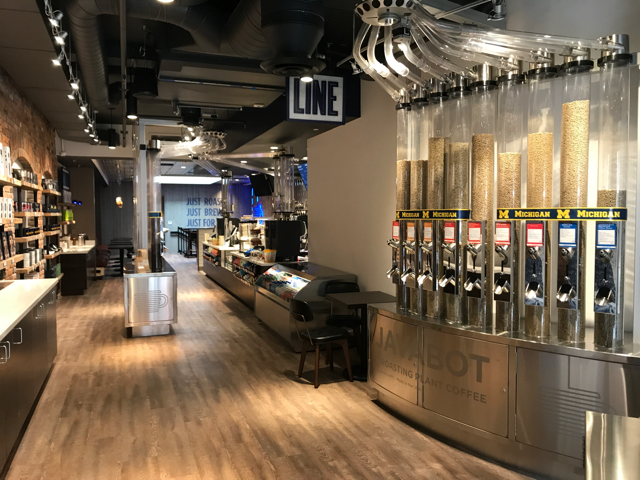 The owner of two Detroit-area franchise locations of the roastery cafe Roasting Plant is suing the parent company, seeking $9.5 million to recoup investments plus damages and alleging fraud based on revenue and profit projections, according to documents filed in U.S. District Court.

According to the lawsuit, Shehadi’s investment in the stores included approximately $600,000 to purchase the parent company’s trademarked Javabot systems, designed to air-roast coffees to order. The system delivers green and roasted coffees through the production process through pneumatic force in a network of visually striking, transparent tubes.

The Detroit Free Press has reported that the Roasting Plant owners plan to “vigorously defend themselves” against the lawsuit, calling the claims “frivolous” and “without merit.”

A defendant in this case, Caswell was also a defendant in a 2015 U.S. District Court case filed by Elizabeth Rose, the owner of a Roasting Plant location in downtown Detroit and an early investor in the company. In that suit, Rose sought repayment for a series of loans she and family trust had allegedly made to the company totaling nearly $2 million.

The Roasting Plant then filed a counter suit claiming that Rose had conspired with members of the company’s board of directors to serve her own financial interests and drive international expansion. According to the Detroit Free Press, the suits concluded with a confidential settlement.

The Roasting Plant and Javabot system debuted in New York City’s Lower East Side in 2013, followed by locations in the West Village and downtown Detroit, and inside the Minneapolis, San Francisco and Denver International Airports. The franchise locations owned by Shehadi were the seventh and eighth stores to bear the Roasting Plant name.

Actor Hill Harper, known for his role in the television show “CSI: NY” purchased the downtown Detroit Roasting Plant location last May, with intentions to use it to support programming for his youth-focused nonprofit Manifest Your Destiny Foundation. According to a press release issued by Roasting Plant Inc. at the time, Harper also invested in the parent company, where he would also serve as advisor and brand ambassador. Harper was not named in Shehadi’s suit.

trust but verify. Words of wisdom. ALWAYS do your own research, and know the specific market into which you with to develop. The real burden of due diligence always rests upon the buyer. Market projections are always and only just that.. projections. Specifically, Dearborn Heights is an area undergoind very rapid change these days. and a projection based on even two year old data could be fatally flawed.