High Design Down Under at Kōkako Organic Coffee Roasters 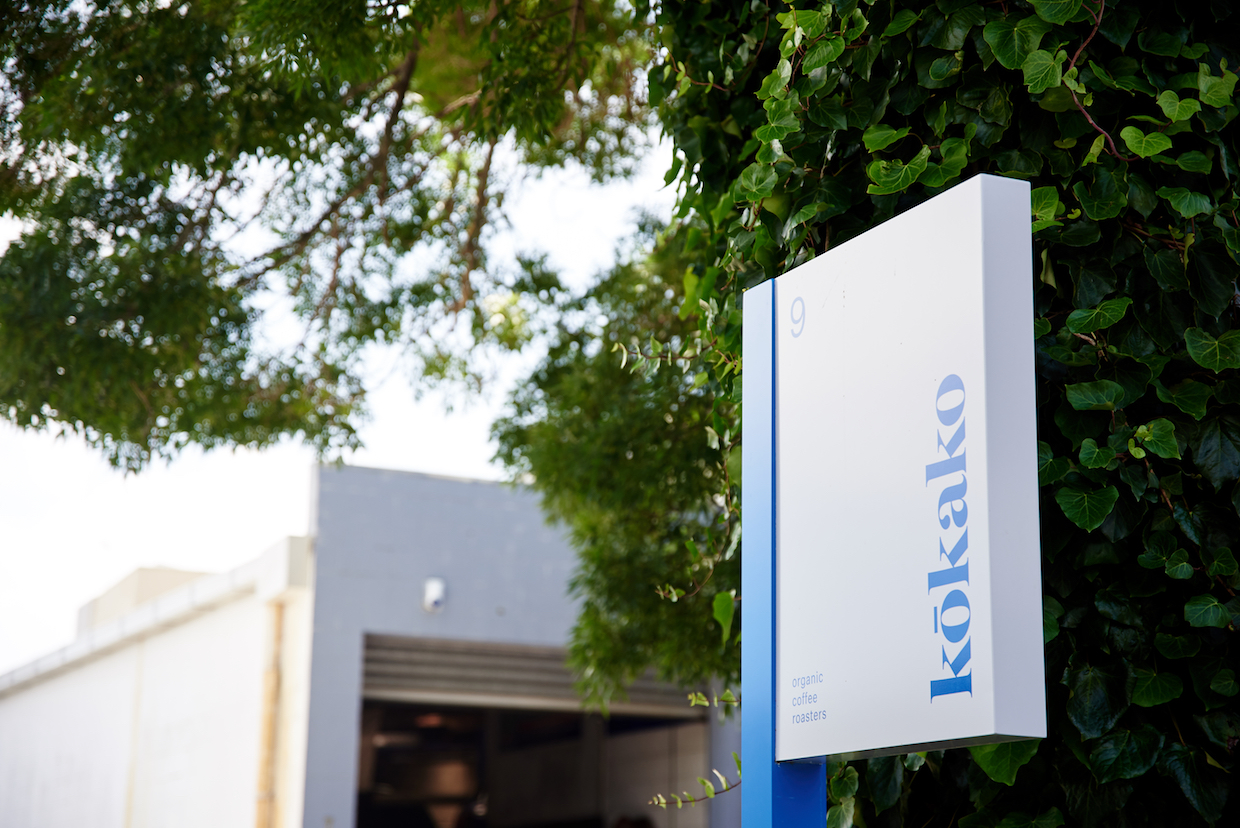 New Zealand roasting company Kōkako Organic Coffee has taken the buildout of its new roastery and headquarters as an opportunity to make an oceanic design splash.

The new facility in the Aukland suburb of Mount Eden was necessitated by new ownership of the building that housed Kōkako’s previous roastery across from the company’s flagship cafe in Grey Lynn. Managing Director Mike Murphy, who originally purchased Kōkako from its founding owners in 2007, six years after the company was born, also took the opportunity to sell the retail side of the business to focus more on wholesale roasting for the specialty coffee segment. 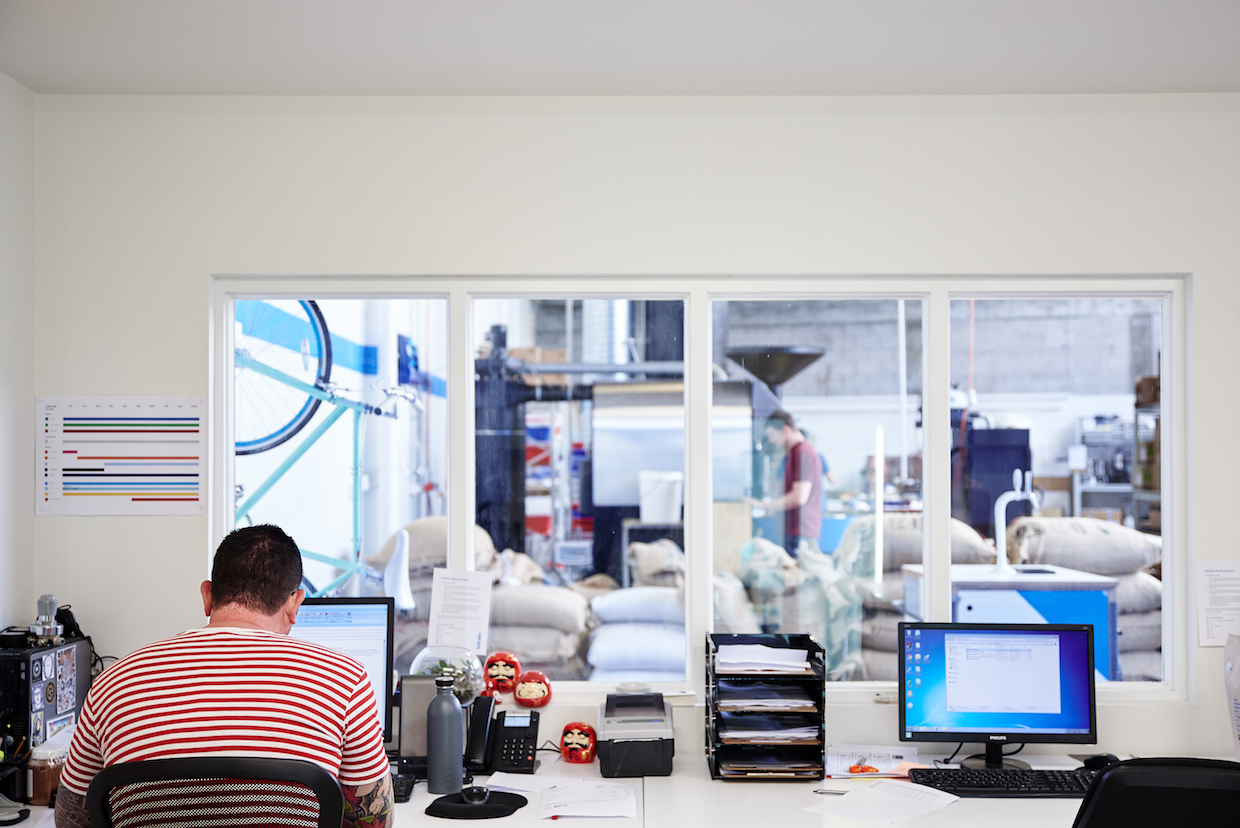 By the middle of last year, Murphy and the Kōkako team found an ex-engineering warehouse built in the 1970s in which to envision the roastery anew, signing a 12-year lease on the space and enlisting the services of partner Chris Stevens of CTRL Space for the two-stage design-build project.

“The biggest design challenge was always to envision what our business will look like in five to 10 years,” Murphy told Daily Coffee News. “Because we did not have a big budget and already had an existing plant and equipment from our previous roastery, we had to be smart about how we applied this to the new space but still allowed for growth in terms of personnel and coffee volumes.” 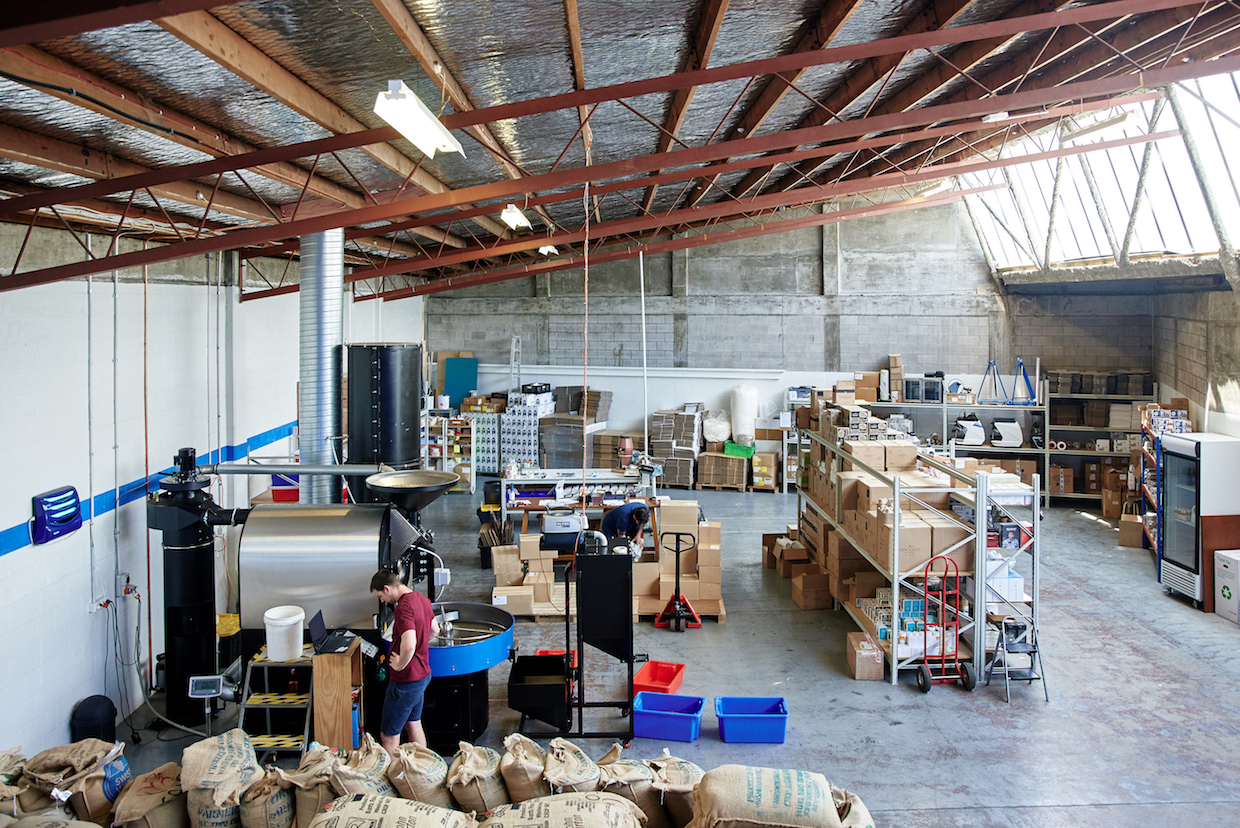 The production roastery as seen from the mezzanine. Photo courtesy of Kōkako.

“The process was lead by getting early engagement from our roastery operations team,” Murphy said of the design planning. “Of utmost importance to us was the ability to ensure that the space was operationally efficient, suitable for innovation and R&D, and future-proofed for growth.” 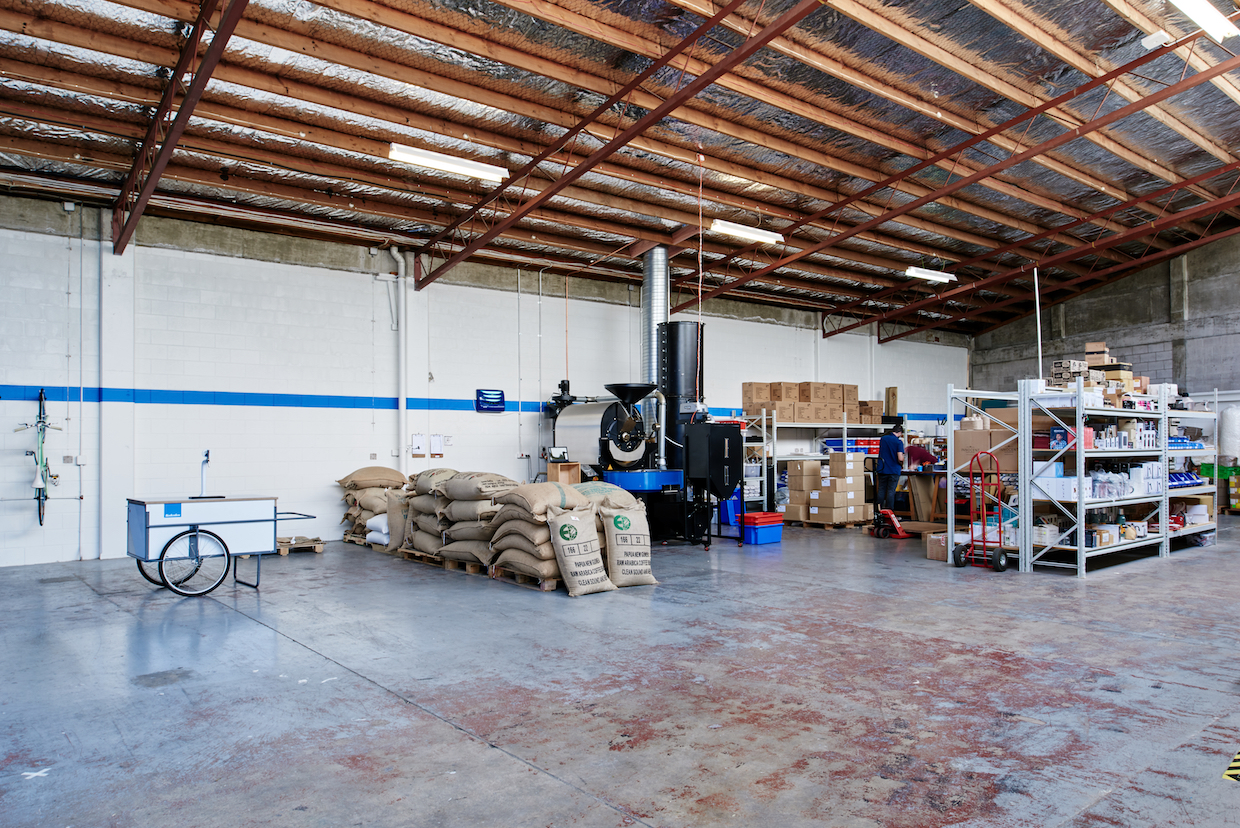 Stage two involved the construction of a 1,000-square-foot mezzanine-level office inside the existing warehouse, plus the ground floor addition of a 215-square-foot barista training room and showroom, a 480-square-foot laboratory/cupping room, a meeting room, restrooms and shower amenities, and a staff kitchen.

“The building has a mono-pitch roof which lends itself to a mezzanine, so we always knew that the inclusion of a mezzanine would be the best use of the space to house our offices and administration,” said Murphy. “We wanted the mezzanine to have a bold visual and spatial impact on the warehouse space, and this was achieved by a large feature wall [that] gives the mezzanine a strong design and brand element.” 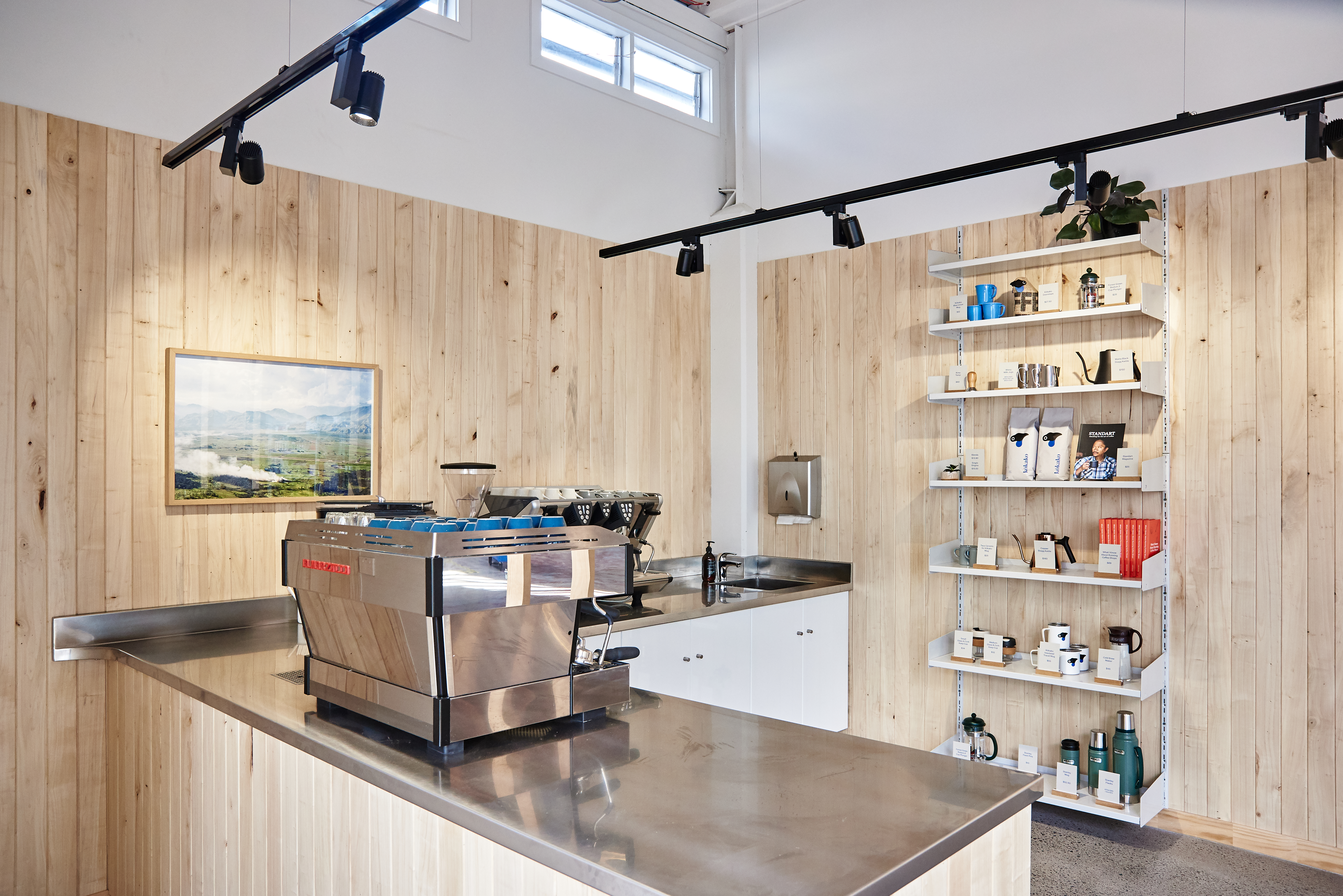 Reinforcing the brand throughout the facility is a signature blue color inspired by the wattle of the company’s namesake the endangered kōkako bird, which is native to New Zealand. Wherever possible, the company opted for reclaimed wood surfaces and joints from materials sourced through an Aukland salvage yard, while it also tried to maintain or refurbish a number of the building’s existing components and surfaces.

“As a sustainably-minded coffee roaster, it was very important for us to try and salvage as much as we could from the old space to reduce building waste,” Murphy said. “As such, we were able to incorporate and re-use the window joinery and some of the floorboards for the new mezzanine.” 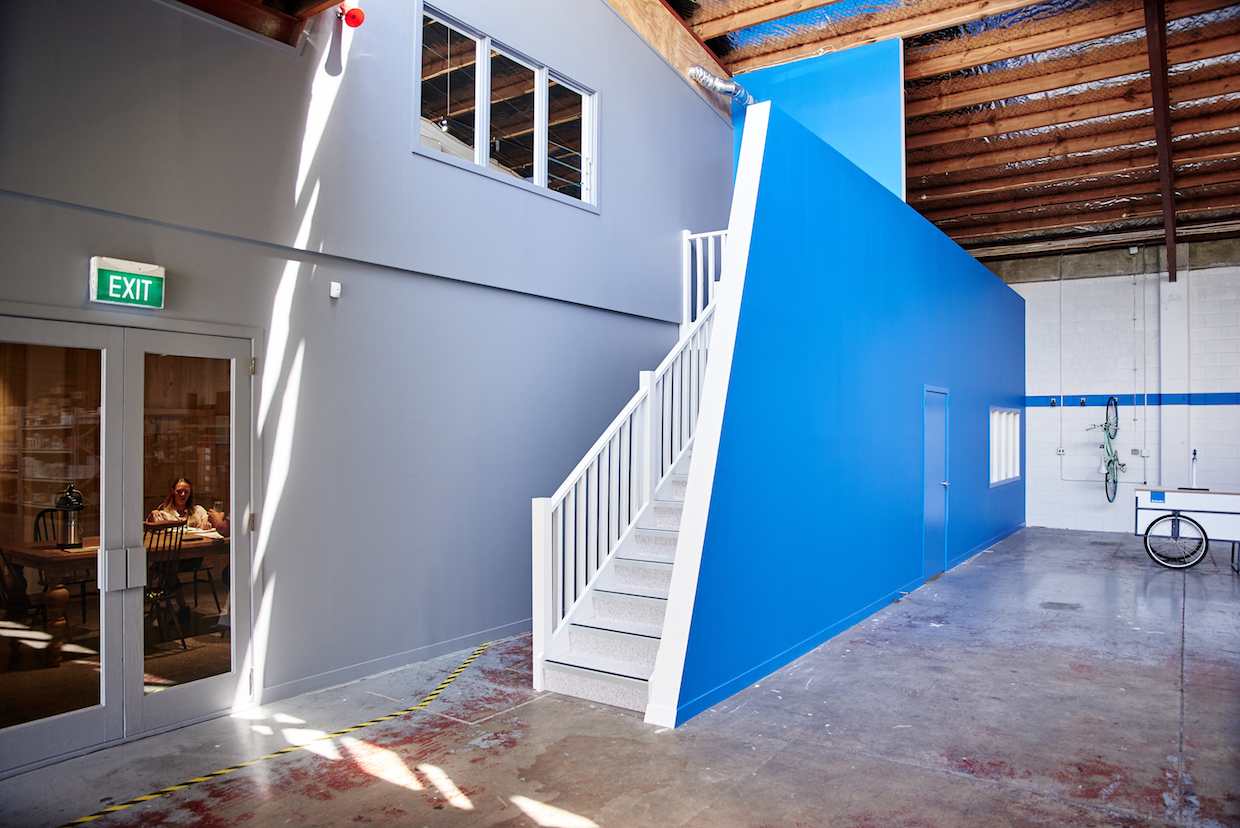 Moving forward, Kōkako hopes to capitalize on some of the sweat equity that accumulated through the relocation and buildout by offering public-facing programming.

“Often coffee roasters are hidden away from the public. We want to be open, transparent, and welcoming to the public so that they can visit on our open days and understand our commitment to specialty coffee,” Murphy said. “When they walk in, we want them to feel intrigued — to be handed a cup of single origin coffee from our Fetco and to be inspired by our commitment to quality, ethics, sustainability, and professionalism in the New Zealand coffee sector.”

Retail shelving and other wood items were purchased second-hand. Photo courtesy of Kōkako.