Proposing a New Benchmark for Coffee Prices: The C-5 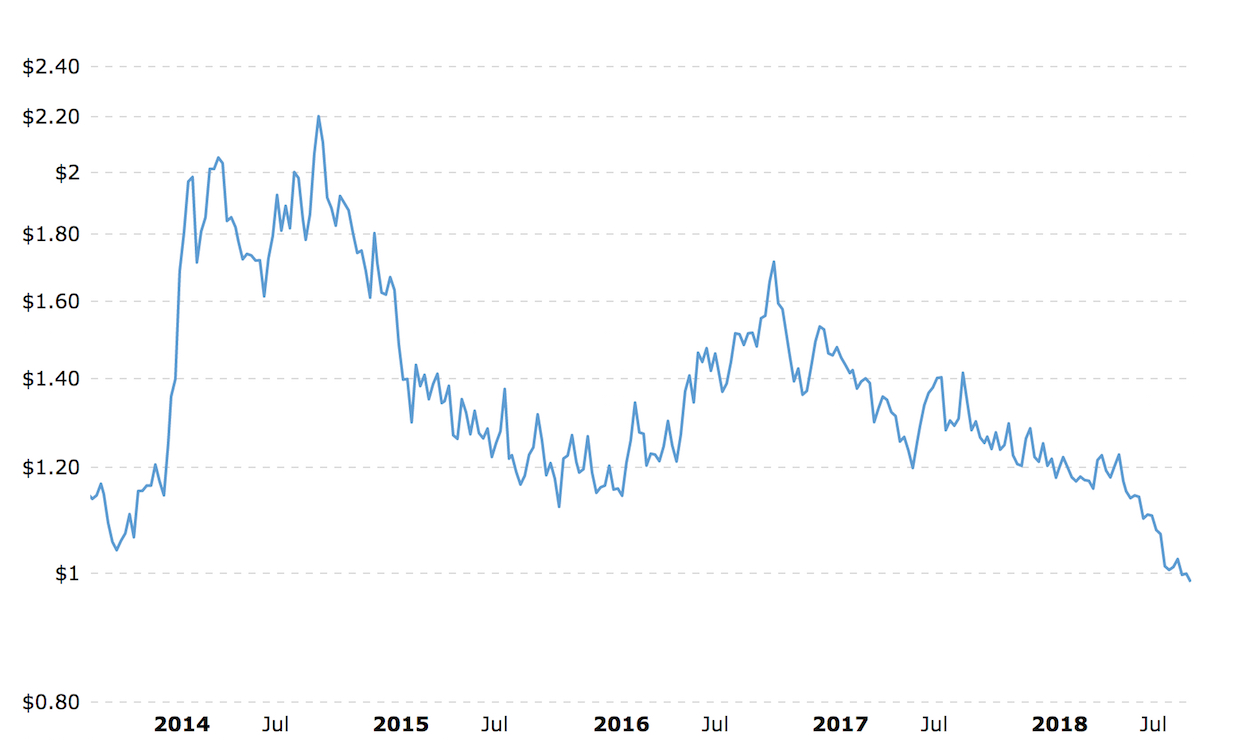 Coffee’s C-market price over the past five years. While coffee currently sits at approximately. $0.987 per pound, the mean price during that timeframe is approximately $1.40.

There is an urgent need to fix the coffee market — to reduce price volatility and ensure that a fairer share of coffee revenue reaches farmers and farmworkers.

In a recent post, I made the point that the coffee market is unjust in that farmers and farmworkers bear a disproportionate amount of risk and remain poor, while some coffee companies and traders have generated huge profits as the coffee industry has expanded rapidly over the past decades. In a follow-up post, I argued that the C-price is extremely volatile, threatening the livelihoods and wellbeing of farmers and farmworkers, especially when prices fall below the cost of production. There is nothing hypothetical about this analysis: extremely low prices will drive millions of farmers and farmworkers into extreme poverty this year.

Other writers have recently warned that that extremely low prices this year will further concentrate coffee production to just a handful of countries where the cost of production is relatively low, i.e. Brazil and Vietnam, and potentially a few others. This result is bad for everyone across the supply chain, including roasters, retailers and consumers who enjoy the variety of coffee sourced from a diversity of origins. Once farmers transition out of coffee, it’s extremely difficult and costly to return again.

In this context, it is critical that we find viable solutions to stabilize coffee prices to alleviate poverty and ensure the sustainability of the coffee sector in multiple origins. Based on discussions with coffee market experts, I’m convinced that there needs to be a combination of solutions at multiple levels.

In this post, we will focus on fixing the international benchmark price for coffee.

A recurring proposal by some actors in the coffee sector over the years has been to set a minimum price, and this proposal has stirred debate again this year. This idea is criticized because of the likelihood of triggering overproduction and crashing the coffee market altogether. I share this concern. I believe that there are inherent risks in setting a fixed, minimum price, and that market forces can do a better job at establishing prices over the long-term, balancing supply and demand.

However, the market is not working very well, currently; it is far too speculative and reactive. The C-price is noisy and confusing. In a previous post, I explained how C-price volatility sends confusing price signals to farmers, where they react (or over-react) by producing too much or too little coffee in following years, exacerbating price swings, perpetuating the boom-and-bust cycle we’ve seen in over the decades. This article in early 2018 highlights this point by quoting a coffee traders who predicted, “(The) market will focus on a large deficit in 2019-20 due to off-years and poor husbandry worldwide driven by low prices…”

Could we use the multi-year mean of the C-price as an alternative benchmark?

Another way to smooth out the volatility of coffee prices, while respecting market forces, would be to use the multi-year mean of the C-price to establish a more stable, alternative benchmark price.

Could this long-view approach mitigate some negative repercussions of short-term price speculation and over-reaction in the market? The premise is that a long-term mean price is a better indicator of coffee values than the short-term C-price, precisely because coffee is a perennial crop. It’s not possible to change production levels as quickly as the C-price fluctuates, so it doesn’t really make a lot of sense to expect farmers and other actors on the production side of supply chains to react immediately to short-term price signals.

A price of $1.40 or $1.50 is still below what coffee farmers wish it could be, but it is certainly reasonable for the rest of the value-chain — including traders, roasters, retailers and consumers — who can afford, without a doubt, to pay this price. This price would not be enough to trigger a boom in production, thereby risking over-supply, but neither would it force farmers out of the market. It would likely trigger a moderate response by farmers, ensuring sufficient production in following years, mitigating the risk of coffee scarcity and subsequent coffee price spikes.

I suggest the five-year mean (C-5) as the benchmark because that’s the time it takes a coffee tree to mature to full production, so it’s a sensible timeframe for farmers to respond to long-term price signals.

The C-5 (or the C-10) price would serve as an alternative benchmark, for planning and negotiation. It would be a voluntary benchmark — a reference point for value-chain actors. It would not serve as a minimum price, nor a fixed price. Rather, it would be a noise reducer, filtering out the extreme highs and extreme lows of the market, helping the market cleave closer to the long-term mean price. When the market price drops, the C-5 benchmark should at least cover the cost of production plus transaction costs. Conversely, when the price of coffee spikes, as it will at some point in the future, the C-5 Benchmark would still serve as a point for negotiation between buyers and producers, even as producers would seek prices significantly higher than the C-5.

The C-5 benchmark would not replace other fair trade mechanisms, such as the FTO minimum or Direct Trade agreements, but it could serve as helpful context when evaluating these prices.

The next post will include a response (reaction) from experts in the coffee trade to the proposal of a C-5 benchmark. A future post will address mechanisms for ensuring that a fair share of the value of coffee reaches farmers.

There is the vicious idea that a price coming from Mars. Price is the outcome of human negotations or a rule of trading established for reasons that are not necessary linked with the nature of stuff measured from the price. To avoid price too low for recovering the cost and permits a profit for the seller means to act inside the decision mechanism. Why is NYCC the place for the benchmark? This is the core. What is the influence of Brasilian Election or the death of Vietnamite President on the level of price? If you establish the price in NYCC, it is straightforward that elements outside the Coffee World affects. Why do you propose that in every country producer, local market establishes own price and the general price will be the average of all local prices weighted by the correspondent quote of global production? It is coherent with the Market Economy.

I doubt this mechanism will help in any way…the reality is that very little consumers are ready to pay a premium for Specialty coffee and there is over hype in the matter.
Brazil and Vietnam are much more efficient in production of mass coffee, but this is the case with many agriculture products.
I do not think your solution is practical.
I think the answer is with much more governmental assistance combine with the Coffee industry continuation, which is done but far from enough.
A direct help to farmers AND consolidation of the farms in many countries is a must.

I strongly believe that rather than imposing an arbitrary unhedgeable mean as the standard, the coffee industry should understand the importance of differentials trading, this has stabilize other agri commodities farmer’s price (see Corn/Wheat) while letting the swing producers countries impact directly in the NY price.

The real problem is that the industry is too comfortable with the stiff differentials establishments, due to the lack of trading of paper trading of them, bringing the whole system to the low liquidity systems that ruled before the hedge funds entered.

The root of this issue is two-fold:

First, the futures trading game and C Market pricing is a false construct based not on reality. As mentioned above, what difference does the death or birth of one individual have on the true BVALUE of coffee from a given country? Naught…. The concept of binding ALL coffee pricing to the C Market speculative games-playing commodity market is a false foundation, That is why it is crumbling.

Second, take for example a borbón variety coffee grown in Brasil, which grow a LOT of that variety. I have sampled more than a dozen different such coffees, all from Brasil, produced the same year. They are NOT equal coffees. Then, add a yellow borbón, a red borbón, a canario, all different strains within the borbón family, and each one of those will present a different value. HOW can binding pricing to a set number per pound ever account for the differences in these? It cannot.

Even subtle differences in rainfall, cloud cover, nighttime low temperatures, from one county to the next with similar elevation, soil type, etc, can make a HUGE difference in the ultimate quality in the cup between different lots grown in the different places. Hah, I’ve even cupped, then bought, two different microlots of the same clonal variety from the same hillside, but where one area had a variation in soil quality and always produces a very rich mellow coffee, while the rest, seemingly identical in every way, and still a great coffee, just doesn’t have that SPECIAL something, and this I’m told is consistant year on year for that grower. HOW would the C-5 or any similar system account for those subtle but important differences?

One other significant factor is in play, and most often gets overlooked:
Take one US dollar, convert it into perhaps a couple dozen different non-US currencies, then GO to the country using that money and see what it will buy. It willl vary widely from country to country, even region to region. That one dollar forty five paid for coffee A in currency 12 will NOT provide the same practical purchasing power when paid for coffee D in currency 19. Then, take those two currencies, 12 and 19, travel to the other side of the same country and see how well off you will live there, on the same US dollar equivalent. One valid example right in the USA would be to compare prices of common household necessities in Honolulu, Kaneoha, HI, San Frnancisco and Fresno Calif, Helena Montana, Seattle and Yakima and Walla Walla Washington SO… should we rightly pay the same price for, say, a gallon of whole milk in each of those places wtih no regard to local condistions cost of production, transport to market, cost of retail space to sell it? Of course not. Fuel costs close to a dollar US per gallon more in California than the same grade of fuel costs in San Antonio Texas or Portland Oregon.

And government “fixing” is absolutely the LAST thing to hold any hope of improving any of this.