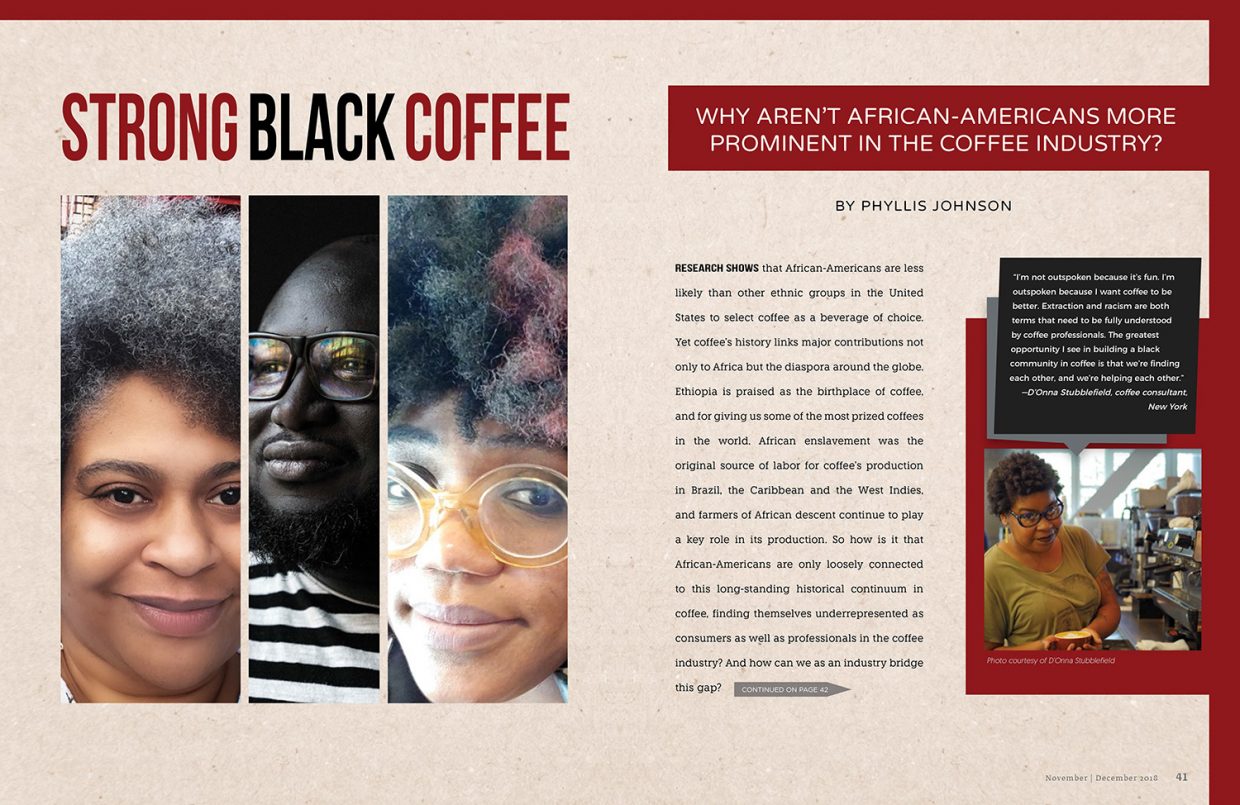 (Editor’s note: This is a preview of an article written by Phyllis Johnson that appeared in the November/December 2018 issue of Roast magazine. Click here to read the full article.)

Research shows that African-Americans are less likely than other ethnic groups in the United States to select coffee as a beverage of choice. Yet coffee’s history links major contributions not only to Africa but the diaspora around the globe. Ethiopia is praised as the birthplace of coffee, and for giving us some of the most prized coffees in the world. African enslavement was the original source of labor for coffee’s production in Brazil, the Caribbean and the West Indies, and farmers of African descent continue to play a key role in its production. So how is it that African-Americans are only loosely connected to this long-standing historical continuum in coffee, finding themselves underrepresented as consumers as well as professionals in the coffee industry? And how can we as an industry bridge this gap?

In close to 20 years of working in coffee, I have met too few African-Americans employed in the industry, whether in international development, trade, retail, roasting, equipment manufacturing, training/education, marketing or other areas. Recently, however, I am starting to see some changes as more African-Americans are becoming visible in the industry. As part of my research for this article, I interviewed 14 other black coffee professionals, and they confirmed many of my personal thoughts about the industry and how we can improve. (You’ll find their photos and quotes throughout the article.) 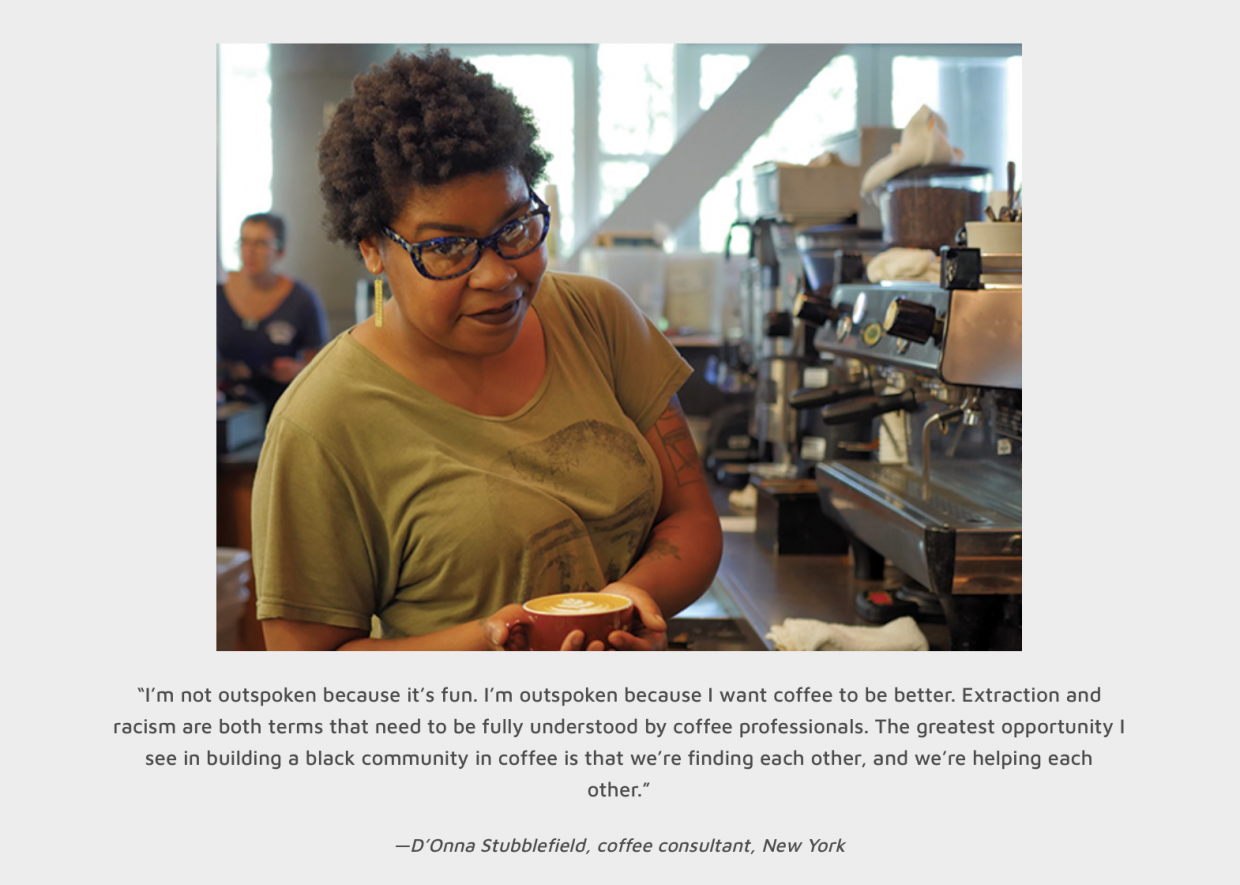 The Past Informs the Present

Racism, inequality and the effects of slavery are human diseases that have left crowded rooms filled with little gender or racial diversity. The coffee industry must not shy away from these difficult subjects. These are not sidebar issues to be discussed from time to time by the few diverse individuals who sit outside these rooms, falling onto the ears of the highly empathic to the unconcerned and everywhere in between, yet left without action. These issues are major contributing factors to the state of our industry and society at large. Shying away from understanding or acting against these difficult realities is like pretending coffee rust disease doesn’t exist — what devastating impact this would have on the livelihood of farmers, local economies and the global coffee world. Similarly, when we continue to ignore and normalize the effects of racism and inequality within the industry, we cannot expect positive outcomes.

Dr. Bryan Stevenson, founder of the nonprofit Equal Justice Initiative, offered his perspective on PBS NewsHour in 2017, saying, “I don’t think slavery ended in 1865, it just evolved. We are burdened by our history of racial inequality. … We have made progress, but our silence has condemned us.” 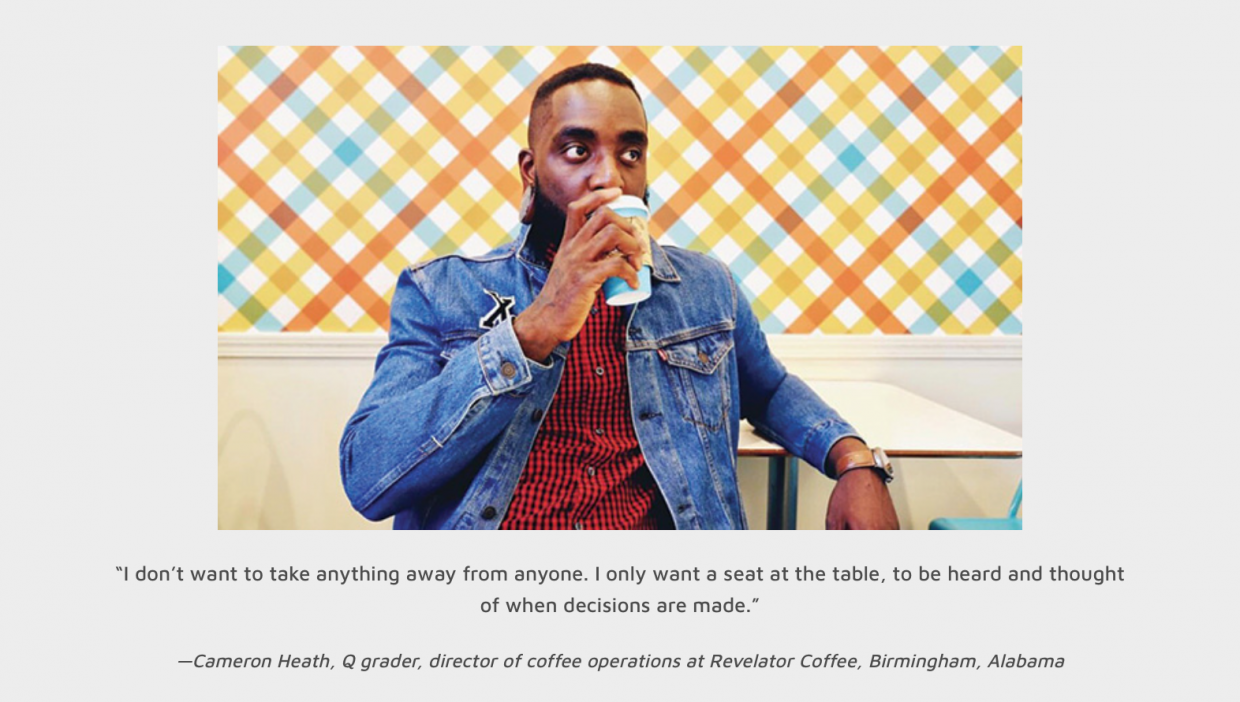 The National Coffee Association USA (NCA) provides research data on U.S. coffee consumption through its annual National Coffee Drinking Trends (NCDT) survey. Established in 1950, it’s the longest-running coffee survey in the United States. The NCDT consistently shows that, in comparison to other ethnic groups, African-Americans are less likely to choose coffee as a preferred beverage.

A summary of the NCDT notes that African-Americans always have reported lower percentages of coffee consumption when compared to Hispanic-Americans and Caucasians.

One of the key areas that may explain lower participation among some African-Americans is a misperception of the health effects of coffee, as the summary further states that there is a general desire to limit caffeine intake in exchange for beverages that are thought to contain more healthful ingredients. 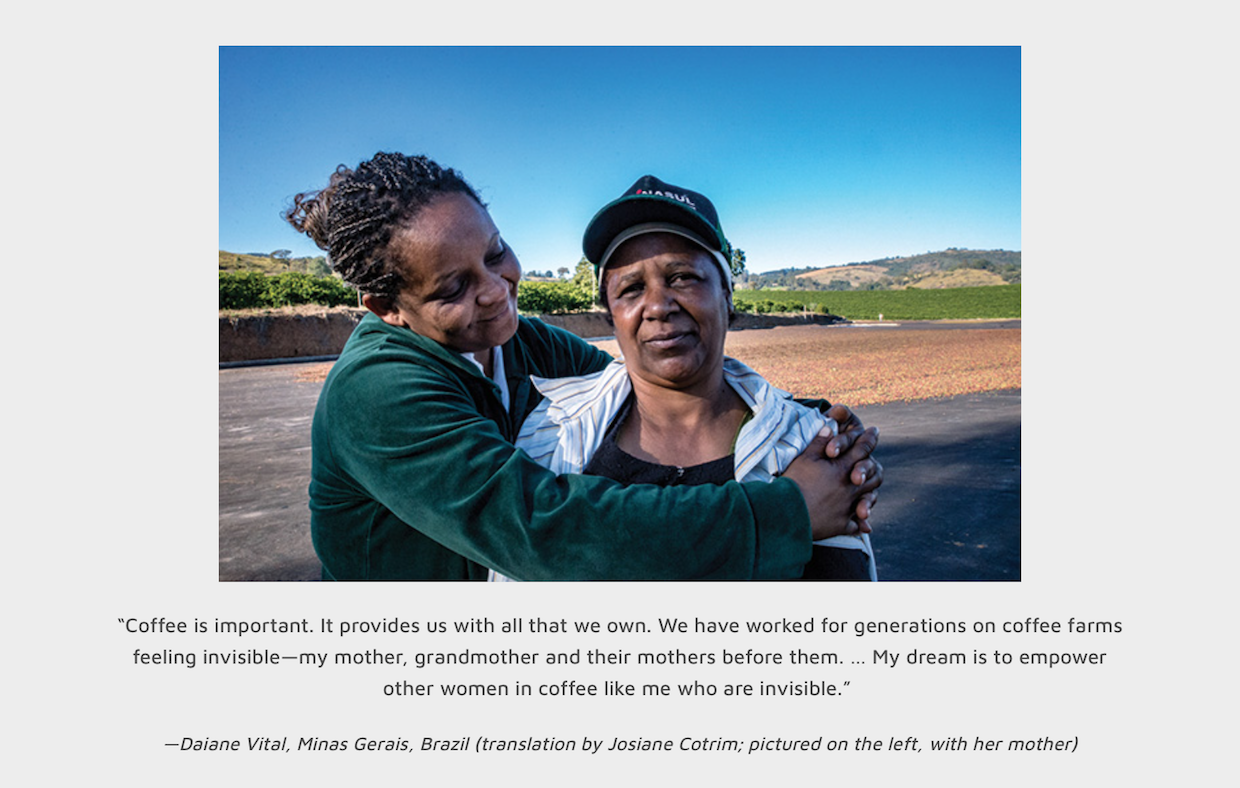 Celebrity endorsements for coffee tend to come from middle-aged white men, while celebrity endorsements for carbonated beverages and fruit juices more often come from young black athletes or musicians. Research shows that more women drink coffee than men, and Hispanics are the largest coffee-consuming ethnic group in the United States. As U.S. demographics continue to evolve, it will be interesting to see how marketing will follow. 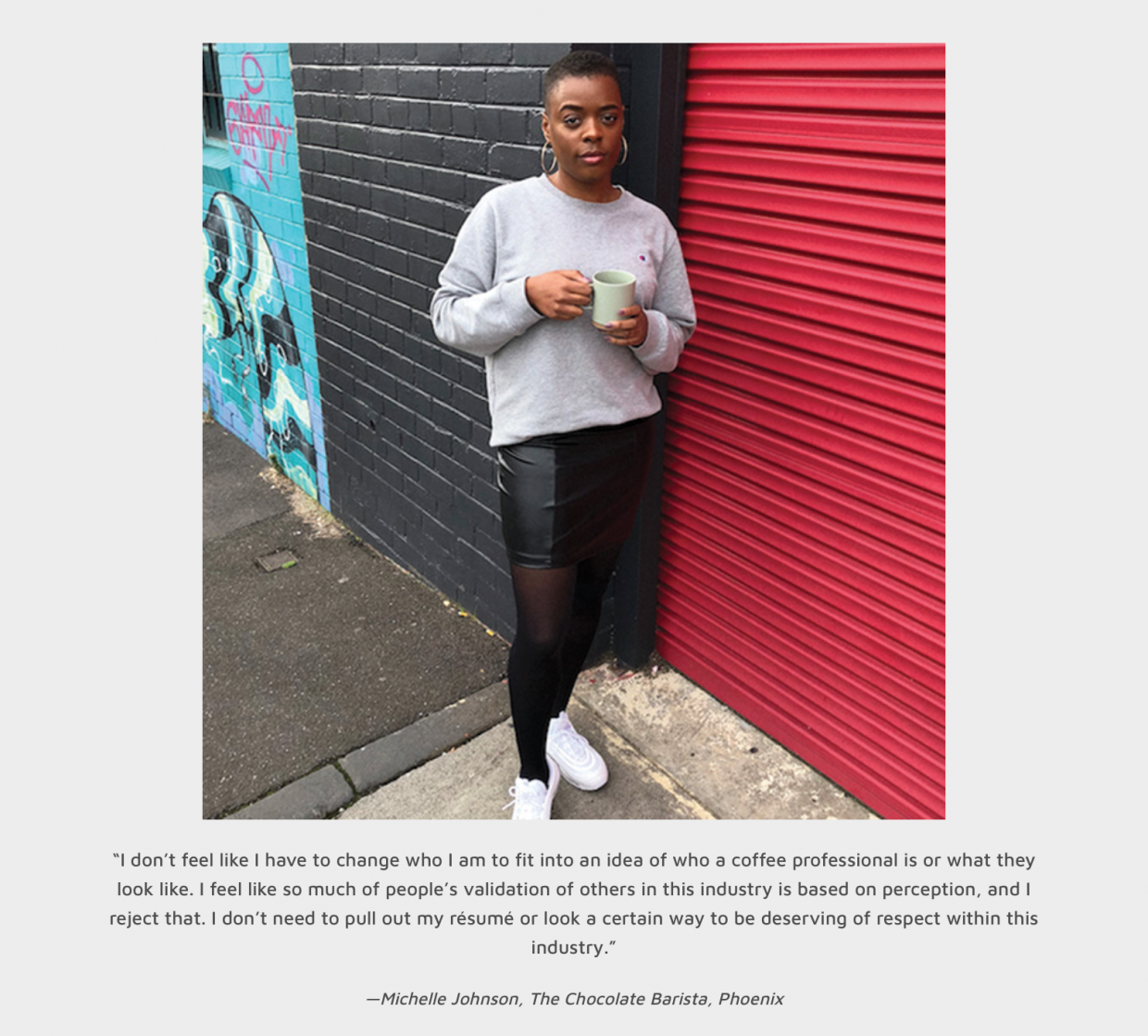 When I pick up a cup of coffee at the airport, I notice the large number of black employees working in cafes and food service. The majority of the customers being served are not black. Standing in line, I think about my journey in coffee. I wonder about the employees’ understanding of coffee beyond the preparation of beverages with fancy names and complex recipes. Do they understand the history of coffee? Not the watered-down version that makes everyone comfortable, but the uncomfortable parts also. Would understanding this history offer more freedom, permission and pride? Could this foster a feeling of empowerment, and thus cause greater interest to do more in coffee?

Phyllis Johnson is president of BD Imports and the recipient of the 2018 Responsible Business Supplier of the Year award from Radisson Hotel Group. Her story has been featured in several books and articles. She’s an advocate for diversity and inclusion in the coffee supply chain, gender equity, economic opportunities, and the complex issues of race and coffee. She’s a graduate of the University of Arkansas at Fayetteville with a degree in microbiology, and the John F. Kennedy School of Government at Harvard University with a degree in public administration. Johnson is a current board member of the National Coffee Association USA and has served on numerous other coffee industry boards. She lives in Georgia with her husband, Patrick. They have three children, Marcus, Matthew and Maya.

This was an amazing read. I am an African American coffee roaster and own my own Coffee Company. I have been roasting for 3yrs and me and my Fiancee’s Coffee House has been open for little more then a year. And when we started this question has plagued me. Still does. Do African Americans even drink coffee? I thank you for bring this subject to the light.

Robert, how is the business gong with your coffee house?

Just about every adult African American I know drinks coffee. There was a period where African American’s thought that the local coffee shops were something non-African Americans visit, but that’s no longer true for the people I know. You might want to set up a poll on your Website to determine stats.

In Cuba coffee rules and even black Cubans love it. There is a song that says “….todos los negros tomamos cafe”, which translates as “…all black people drink coffee”. Our coffee is mostly espresso, strong.