Fitting a Bulk Grinder to Your Application 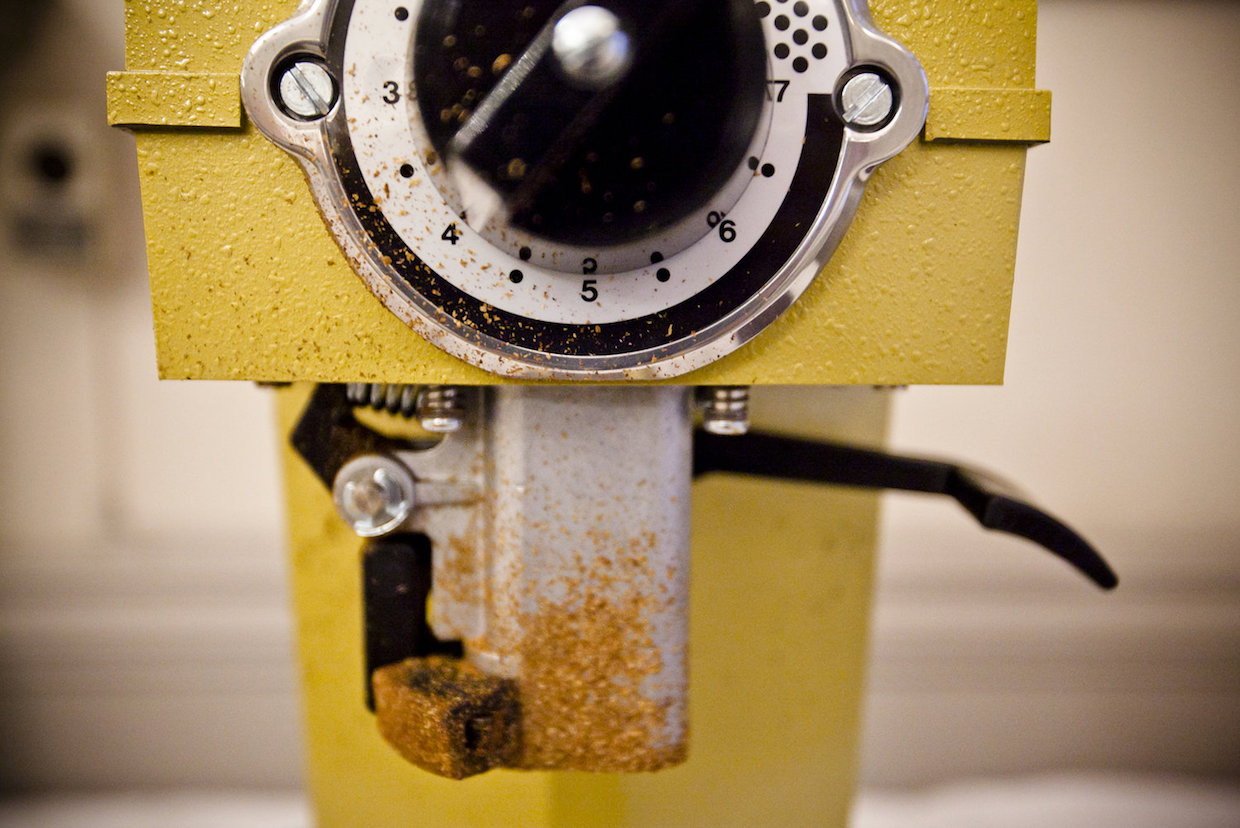 If you are a technician, some of your accounts will need equipment that is able to grind large amounts of coffee at a time. Perhaps a cafe sells their beans to customers and needs the ability to grind the coffee for them. Maybe a roaster needs to ship hundreds of pounds of ground coffee a week. It is also possible that your local restaurant needs to grind several pounds of coffee to fill their enormous batch brewer. For all these clients, you will need a large, specialized coffee grinder. The question is: How do you decide which grinder works best for them?

The first step to good decision making is having a solid understanding of your options. In this case, you need a bulk coffee grinder. You also need to take into consideration the following:

In our three example cases, we have differing parameters for expected delivery speed. In a cafe, customers are willing to wait, but only for so long. In this case, you will need a larger motor to spin larger burrs so that you can grind 16 ounces of coffee in roughly one minute. This grinder would ideally have 75mm diameter burrs or larger and should hold at least a pound of coffee in the hopper. You may also want to get a grinder with a “bag clip” on the spout to hold the final coffee bag in place.

In the example of the roaster, they are really going to need a special piece of equipment. For a startup roaster, speed might not be a factor because they just sell a couple pounds here and a few pounds there. But, as they expand and grow their business, grinding coffee will become a major snag in their delivery process. They will have to be able to be efficient. They should have a large, industrial grinder with burrs exceeding 100mm in diameter. If this roaster plans to wholesale coffee in their local area or beyond, they will need a hopper that can hold 3-5 pounds, depending on the size of bag they want to sell.

For a local restaurant, they may get a rush or two, but should have a batch of coffee brewed just ahead of the order so that the grind speed doesn’t really impact the speed of service. Instead, this customer will need a reliable work horse to grind large quantities of coffee at a time. Any grinder rated to grind the necessary amount of coffee in one go will suffice.

Now, you may be able to run a Mazzer Mini for a minute or two on a course grind and produce enough coffee to fill the brewer. That does not mean that the Mazzer Mini is an okay recommendation. The grinder is only engineered to grind an espresso-sized serving of coffee followed by a reasonable rest. Using such a grinder for bulk batches will prematurely wear the burrs, motor and other critical components.

A typical cafe might grind a pound at a time with a decent break between ground coffee sales. However, you need to consider each case on its own merit. It is possible that a cafe sells 10 pounds of coffee per day, but all of those sales happen as people stop in from 7:30 to 9 a.m. That means that a pound of coffee is ground every nine minutes. This is a fair strain for a grinder and will require a larger piece of equipment to keep up, even though it will sit idle for more than three quarters of the day. This cafe may need a similar grinder to a small, start-up roaster.

Roasters are either going to roast all of their coffee and then grind and bag it immediately, or they are going to bag it and grind it later as they need it. This is an important difference. If they have a 20-pound roaster and need to grind half of it for the day, every batch will either require the grinder to run for 10 pounds back-to-back, or maybe they will grind the coffee only as it is ordered, allowing the grinder to grind a pound or two before it is able to rest and cool down. If the roaster plans to grind the coffee all at once, they could need two or even three grinders to keep up with the load. If the roaster will spread out the load, they may be able to use just one large grinder.

A restaurant will typically use their grinder and let it sit before they have to use it again, thus broadening the range of acceptable grinders at their disposal. However, a breakfast spot that can hardly keep enough coffee in the cistern may prove to be an exception. They might grind coffee back to back-to-back as they run their one or two coffee brewers but only have counter space for one grinder. In such a case, they will need a large bulk grinder to keep up with their morning rush.

There are two types of burrs used in bulk grinders. They look very different from one another. One is really an extra-large espresso grinder burr. It has a similar tooth pattern, but a much larger surface area. This type of burr is capable of achieving a Turkish grind. The second type of burr has a much more aggressive tooth pattern. It will have a primary cut that is cut from the center of the burr straight out to the edge — though it doesn’t reach that far. This type of burr is made for speed and heat efficiency, but really won’t adjust fine enough to reach a Turkish grind. These burrs have been specially designed for high volumes with different goals in mind.

If a cafe finds that their customers need to grind for espresso, then they will need to purchase a grinder with the first type of burrs. This grinder could be a Ditting or a Mahlkonig or a Mazzer, Eureka or similar grinder. The key is to get one that is large enough to handle the load the cafe will experience. If the cafe doesn’t serve espresso and doesn’t think their customers will demand Turkish grinds, they may be able to use the second type of burr. In such a case, they may want to look at a Curtis, Bunn, Grindmaster or similar unit.

A roaster is probably going to need the ability to grind coffee for espresso. That will require them to use the first type of burr in at least one of their grinders. If they are packaging coffee to be used in brewers, then they may also need the second type of burr.

Some grinders are easier to adjust than others, and some grinders allow for a greater precision in adjustment than others. Knowing the customer’s desires will help guide your recommendation. Many of the grinders with burr type one will allow for micro-adjustments to dial in espresso. Most grinders intended to grind in bulk will have an adjustment dial that makes it possible to swing from one grind to another and back quickly and easily. These will have different brew methods marked out enabling you to grind for French press one batch and then grind for pourover the second batch with a simple 180-degree turn of a knob. Others will have a collar on the top for adjustment, these are not as fast swinging back and forth between grind sizes, but will allow you to make a smaller adjustment to your grind to perfect the job. These, normally, have the first type of burr.

A cafe will likely need to adjust their grind frequently, and so they will need to have the ability to grind to their customers’ needs. This means that a front-knob adjustment is helpful.

A roaster is unlikely to know how their customer will brew the coffee, so they may not adjust the grind that often. Or, they may label bags of coffee according to the brew method the coffee is ground for, and may actually need to adjust.

A restaurant is unlikely to change brew method very often, so they will be able to almost lock in a grind setting and not move it often.

A cafe might need the capability to grind for espresso and might need to grind during a rush making the usage close together. A cafe may require grinding 16 ounces at a time. This type of customer might want to aim for something like a Ditting KR804, for example. It may be overkill for some of the day, but it will perform when they need it most.

Other cafes may get away with a Super Jolly. It all depends on need. Many cafes will also run a brewer, so they may want a burr-type-two grinder, as well. This discussion involves their need to grind coffee as customers order bags to go.

Roasters may start out with a grinder similar to the one we recommended to the cafe, but are likely to out-grow such a grinder. If they are willing to spend a little more money up front, they may save themselves a costly upgrade later. A roaster will need to grind espresso, will grind in bulk for long periods, and needs to be able to fit five pounds of coffee in the hopper (in some cases). This type of customer may want to start out with something equivalent to a Ditting KR1204. These types of grinders are workhorses and can run for hours. If the roaster outgrows the grinder, it isn’t a bad idea to simply add in a second similar grinder and run them both. This allows for a distribution of heat across two sets of burrs and two housings, rather than forcing an upgrade to a costly model like the KF1800. The two-grinder model also provides redundancy in case of failure on one grinder.

Restaurants with or without espresso machines are going to grind one batch at a time most of the day, but need to have enough capacity to keep up with any surges they see in customer demand. They will likely want a grinder similar to the Wilbur Curtis SLG10. It should meet demand and allows them to grind directly into the brew cone, eliminating the need for an intermediary container.

They could also have a Super-Jolly size grinder or larger to manage any espresso needs they may have.

Author’s note: Please note that all specific grinders and grinder brands referenced in this article are chosen due to the author’s familiarity. There are sure to be there fantastic options out there, the reference is intended to allow for an accurate comparison.

Chase Lemos
Chase Lemos is the Director of Operations at Nuova Ricambi USA.

Espresso grinder looks to be exellent in quality product, but what about safety and environmental protection side?