The Carbon Footprint of Vietnamese Robusta: Problem and Potential 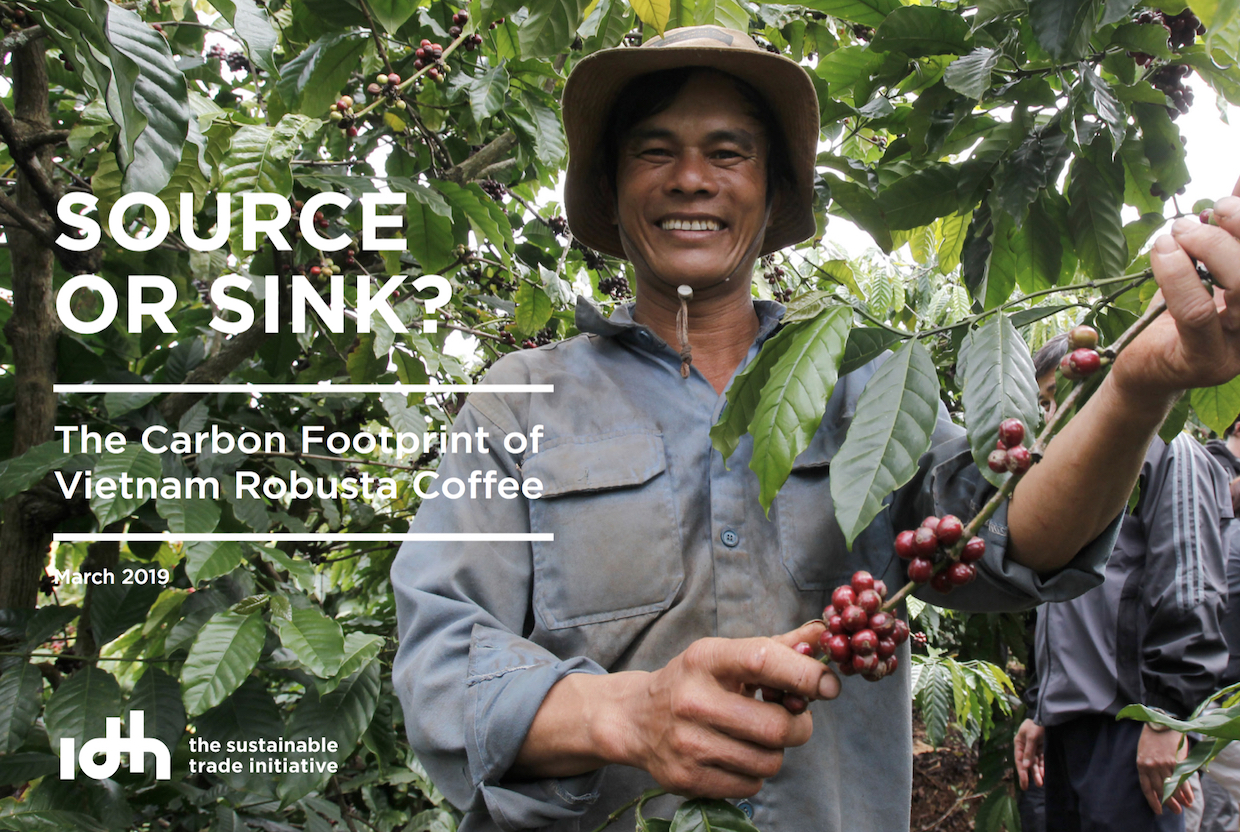 The cover of the new report on Vietnamese robusta’s carbon footprint from IDH, The Sustainable Trade Initiative, called “Source or Sink”

A two-year analysis of hundreds of Vietnamese robusta coffee farms found new evidence that single-crop (monocrop) farm systems are releasing more CO2 into the atmosphere than they are sequestering.

Conversely, the research found that diversified coffee farms — those with other plant species grown alongside coffee — can act as carbon sinks, removing significant amounts of CO2 from the atmosphere.

The research and subsequent report was led by The Netherlands-based IDH, The Sustainable Trade Initiative, with data compiled by the Dutch firm Agri-Logic involving the work of numerous large coffee trading companies with vested interests in robusta supply, including JDE Coffee, Lavazza, Olam and Ecom subsidiary Acom Vietnam.

“Climate change is a threat that requires urgently rethinking the farming systems in which coffee is produced,” IDH Director of Global Landscapes Daan Wensing said an announcement of the report, which was released today. “This research brings hope that communities and coffee farmers can become more climate-resilient, and our coffee more sustainable. Together with more efficient fertilizer and water use, diversification can be at the forefront of efforts to make coffee production carbon positive.” 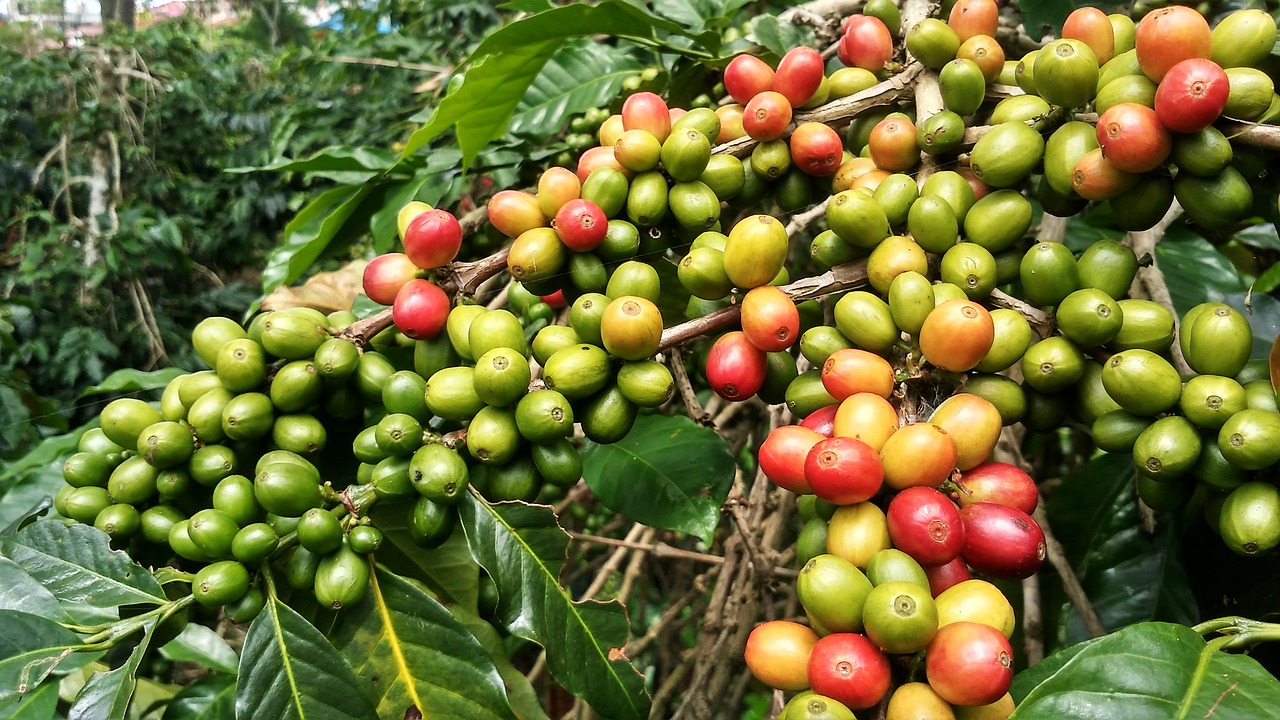 While the report makes clear the need for more diverse and biodiverse coffee landscapes, as well as for training and education on the strategic use of farm inputs, it does not address whom shall pay for it all — and asking farmers to pay for climate-resilience projects in the midst of a global coffee price crisis may be a tough sell.

Vietnam shot to prominence as the world’s second largest coffee-producing country by volume behind Brazil, beginning in the aftermath of the Vietnam War and throughout the 1990s. Primarily producing robusta, the country’s coffee sector has been defined by a volume-based approach, often resulting in deforestation for full-sun monocrop farm systems, and the subsequent loss of biodiversity. It also creates a heavy reliance on pesticides, considered one of the largest sources of carbon emissions in coffee production.

This year, the country’s main growing region, the Central Highlands, is facing the prospect of a drought, which could affect output and quality, and which underscores the need for climate change mitigation strategies combined with climate-resilient production methods.

The IDH research explored the carbon footprint of some 300 farms in the Central Highland provinces of Lam Dong and Dak Lak. The report suggests that monocrop coffee farms result in net sources of carbon, releasing an average 0.37 metric tons of CO2 per year per metric ton of coffee produced. On the other hand, diversified coffee farms were found to be carbon sinks, removing 0.16 metric tons of CO2 from the atmosphere per year per metric ton. The carbon implications are immense given the fact that Vietnam produced an estimated 1.65 million metric tons of coffee in 2017.

In addition to more efficient and strategic usage of water and pesticides, the report suggests that farmers could add plants such as pepper, durian, avocado and other crop plants alongside to create more biomass and sequester more CO2.

“Diversification is a growing concept in Vietnam,” said Wensing. “As more farmers adopt this and other agroforestry methods, the number of farms that serve as carbon sinks will grow, becoming crucial drivers of both climate mitigation and resilience.”

Increased carbon dioxide in the air means plants grow faster, more luxuriant. Don’t believe me? Then WHY do controlled amosphere grow operations deliberately DOUBLE te CO2 content of the atmosphere inside? Simple… their systems yield more product because there is more carbon available in the air for the plants to sequester into new growth. WHY do we persist in promoting the false meme that carbon dioxide in the air is BAD? Didn’t you learn the carbon cycle in third grade geology and voilogy classes? Or do they even teach that stuff any more?

Further, are you aware that the world’s oceans are THE regulator of atmospheric carbon dioxide? True story. CO2 in the air is a trailing factor, not the lead. The oceans do what they do, and we get the results in the air. Earth’s CO2 levels have in the past been close to double what they are today, and in those epochs the earth was more fecund, rich, verdant, cooler. .

ALL of man’s activity put together does not make enough difference in a decade to matter more than when Mt.St. Helens blew back in 1980. And the downstream “desesrt” that was predicted to last a thousand years didn’t quite materialise… the very next spring, that of March/April 1981, revealed shockingly green and abundant new growth… in what was predicted to be a desert for a milennium?

What do we really KNOW about all that stuff anyway? Throwing darts over your shoulder at the wall blindfolded in a dark room would be more predictable.

Tionco, you’re angry at words and bitchy to an author you either read often for exciting coffee info or came to just pick a fight. And while everyone you’re yelling at haven’t had as many “voilogy” classes as you must have, I’ve read plenty of biology books and haven’t turned my back on a stunning wealth of reporting since 1980 and the eruptions of Mt. St. Helens. But if that’s your era, boomer, then remember when Aqua Net CFCs a hole in the ozone layer?

Oceans are large, and they absorb and regulate CO2. And without fail temperatures have risen to new highs year and after year, and the oceans have increasingly grown warmer, as a result. As temperatures rise, mass coral bleaching events and infectious disease outbreaks are becoming more frequent destroying the species that feed and live off of the reefs and the biodiversity in the oceans that we depend on for our own food.

The point of this article was neither to divert your afternoon, nor mine, into angry typing and (at least my response) current fact-checked peer-review scientific research, but rather to make a compelling case for the benefits of biodiversity. I’m making the same point to you now, because while you don’t like to read books post-1980, I hope maybe you’ll read this.

And if you do I bet you’ll get angry and a little hotter and you’ll wonder how someone as small and far away as me could raise the temperature in your house.