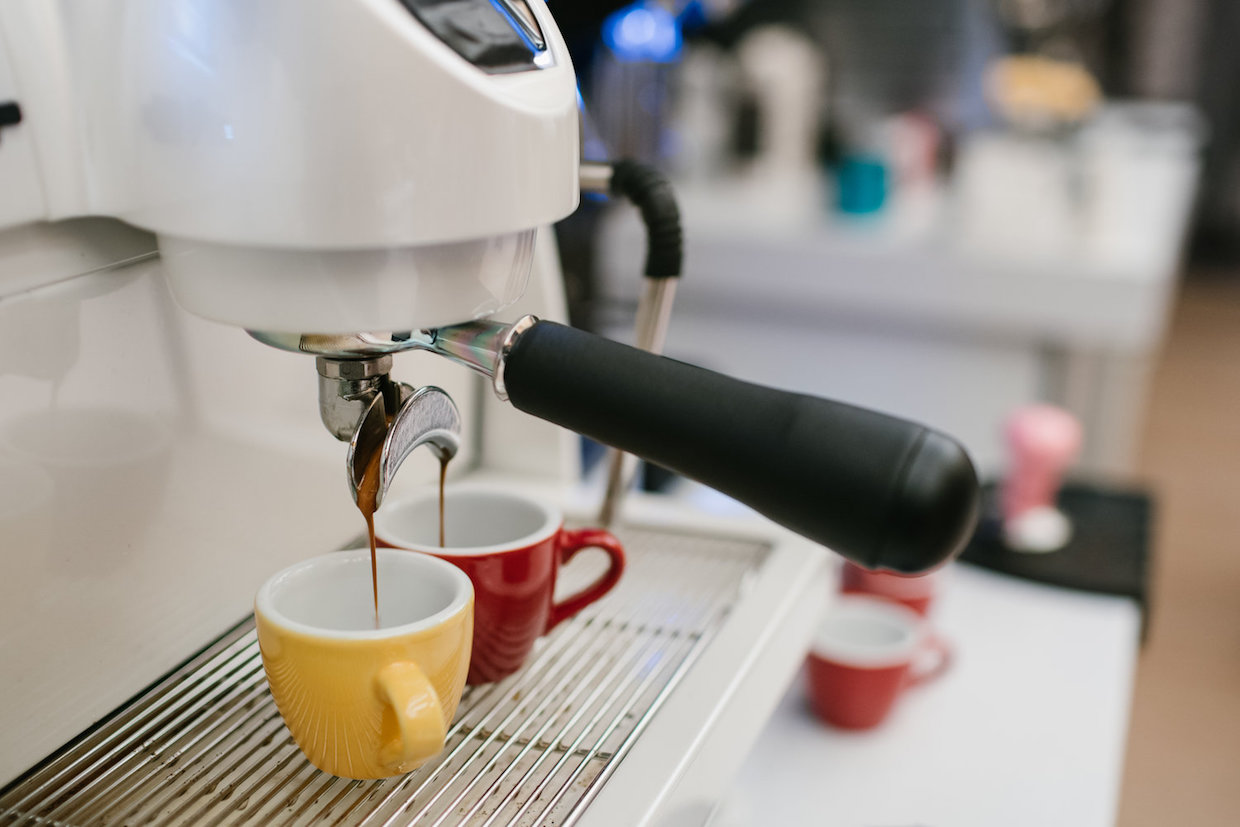 When I speak to fellow industry nerds about espresso machines, one of the least understood topics is just how many factors influence temperature at the point of infusion.

For decades, Italian engineers have struggled with the balance between heat and pressure. The most important thing to understand about heat is that it is fluid — it is always moving from one place to another, generating and dissipating. In order to better control it we have to understand the physics of the materials and engineering responses to the challenges. Fundamentally, you either try to fight it by micro-managing with insulation, sensors, and elements, or you exploit the various materials’ differences to give you what you want.

The most common metals in commercial espresso equipment are copper, brass alloys, and stainless steel, and they all behave very differently in how they transfer and store thermal energy. Copper transfers heat nearly three times faster than yellow brass and close to 20 times faster than stainless steel. The speed with which it moves also determines how quickly heat dissipates. Essentially, designing an espresso machine is a struggle between getting heat where it needs to be — and, as importantly, when — and then stabilizing it when it gets there. For example, using low-watt density copper heating elements is an attempt to reduce hysteresis in temperature even if means they melt from time to time.

Machines that attempt to maintain a stable temperature throughout the system are actually pretty simple to design: establish a target and try to strike a balance between the heat loss and convection and pulse the elements to keep it stable. This was the WBC standard for years based on a limited understanding of how espresso machines were supposed to work. Espresso machines that profile temperature — pressure is another discussion entirely — to each phase of the extraction process are now what everyone is after, but moving targets are hard to hit and the new challenge is being able to repeat profiles from one shot to the next.

This is why thermal management in machines is complex. But it isn’t a new challenge.

The very first lever espresso machines designed in the late 1930s and finally produced after the War a decade later used the large groups to dissipate heat passing to it from the boiler. The boiler operated at 120°C (248°F) and the groups shed close to 30°C (86°F) by being exposed to ambient air. The water in the boiler entered the group at an elevated temperature, filling the chamber above the coffee to form a column like an Aeropress. The initial hotter water would be pushed through the coffee by the steam pressure of the boiler, but the cooler group would lower the temperature of the water as it passed through the jacket so that when the lever was released, the actual high pressure extraction would coincide with a reduced water temperature. In essence, espresso machines have been temperature and pressure profiling for 70 years.

Everything we have built since then has been, in one way or another, trying to duplicate what these early machines did with springs and levers.

This extraction sequence — pre-infuse, extract and recover — can be mapped and predictably replicated without sophisticated electronics if attention is paid to the recovery cycle. The machine has to thermally stabilize before it pulls the next shot. It is this duty cycle that is the most challenging: speeding the recovery to prepare for the next shot can tend to overheat the group when at rest for extended periods (why you flush the group). On stainless steel saturated groups with less efficient conduction, you have to flush the group to heat it up.

Copper boilers and exchangers were used to quickly conduct heat to the group so that the cycle of temperature profiling could reset quickly, using the brass of the group to moderate the rapid temperature rise from the copper. As the temperatures stabilize the convection flow of heat slows until the system starts to balance heat transfer and dissipation. Keeping the portafilter in the group does much more than keeping it hot, it adds close to a pound of mass to the group to stabilize temperature and draws heat away from the group. A machine from Brasilia from the 80s with a famously hot group used a 2-pound portafilter in an attempt to cool the head.

Stainless steel, however, transfers heat so poorly that is has to use another method to move heat from one place to another: water. While water has a high thermal mass — it stores a lot of energy — it is about as efficient in moving heat as plywood. Steam is even worse, which is why copper boilers move heat to the apex of the boiler more from the conduction of the copper itself than anything else. Stainless steel machine boilers and groups have to actually move the water through the machine in order to stabilize temperatures. Early drawings for the La Marzocco saturated group detail the convection flow of hotter water from the boiler into the group pushing cooler water back to the boiler. They were able to use the mass and thermal characteristics of water to stabilize temperatures, but sacrificed profiling in the process.

Flow through heat exchangers like Faema used both the convection of heat from the copper and the movement of water to heat the groups. Hotter water from the top of the exchanger flowed into the group pushing cooler water down the lower return tube. Regulating the flow of water enabled Faema to regulate the static temperature of the group. This convection current of water paused during the actual extraction cycle. The water actually comes from both the hot upper and cooler lower tube, stabilizing and slightly lowering the temperature during the extraction with a cold water injection tube further tempering the water in the upper tube.

The Simonelli Aurelia took this one step further, using different sized jets in the upper and lower pipes to bias the temperature of the extraction, favoring one tube over the other.

Pro tip: When the group is cooler than it should be, one of the supply tubes is blocked. If it gets hotter as you run it, it’s the lower tube. If it changes very little it’s the upper tube.

Saturated groups, where water is actually stored in chambers in the groups themselves, attempt to more precisely control the temperature of water by taking measurements as close as possible to the point of extraction.  But whenever mixing two temperatures of water together to profile the extraction, there is still a recovery period to reset the group.  This is why large temperature displays at the group are important — so long as the barista pays attention to them.

There is one last area of concern regarding heat: electronics. Most sensors are reactive. This means that whenever there is a change in temperature, the electronic controls react to that input and create a response by either changing the mix ratio or engaging the element. One of the challenges is that the flow rate for different quantities of coffee is different and trying to model temperature profiles in response to sensor changes is an imperfect approach. Unless you are only pulling doubles, the profiles are going to be different for each shot. For example, PID controllers are designed to do one thing: predict when the target temperature is going to hit and maintain it precisely. How it responds to minor fluctuations is a different program from what it should use to compensate for a big temperature drop that occurs when flushing a group vs pulling a shot or refilling a steam boiler after four Americanos.

Rancilio has moved towards temperature profiling customized to each group on their premium machines and are getting good results. The best results appear to be when duplicating common (declining) temperature profiles of existing machines, but it provides much more flexibility.

The next revolution will be when an espresso machine can adjust the temperature profile response based upon the flow rate as measured by the flowmeter and based upon the shot selection. PID controllers can’t even get close, but a customized approach employing AI to map profiles to each selection would be slick. That would be a real proactive solution to an age-old problem.

What is the ideal – or target – water temperature – at the point of infusion in a professional espresso machine please? Manufacturers of both professional and domestic machines try to avoid answering this question – why would that be? I heard they try to achieve around 90 degrees C, is that correct?

“The next revolution will be when an espresso machine can adjust the temperature profile response based upon the flow rate as measured by the flowmeter and based upon the shot selection.”

Have you looked at the Decent Espresso DE1+. Its doing this already.

One of the issues when trying to control the extraction temperature of espresso is flow rate. Espresso extractions with lower flow rate have lower temperature delivery because the heat from the water dissipates as it moves through cooler areas of the group and espresso puck. Higher flow rates deliver water and temperature more quickly.

Rancilio has been using an algorithm that takes the flow rate into account when calculating the group boiler temperature. This means the extraction temperature stabilizes closer to the actual setpoint temperature than a standard PID, but even the most accurate espresso machines produce a temperature gradient throughout the puck that takes 15 – 20 seconds to stabilize.