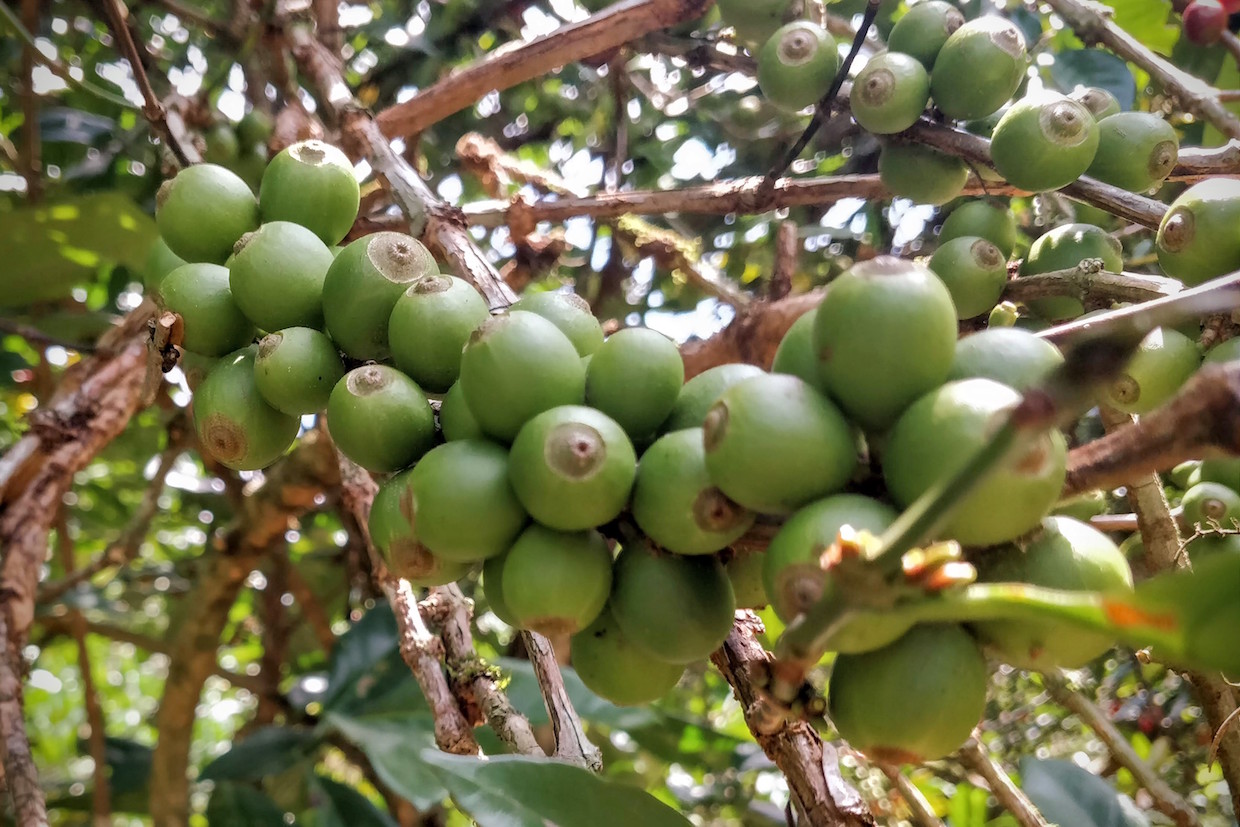 A Coffea Liberica tree in Borneo. Photo by Asser Christensen.

The coffee species liberica (C. liberica) tastes bitter, metallic and woody. Such has been the commonly accepted perception within the specialty coffee community.

In recent years, a small group of coffee professionals from Malaysia and Germany has begun to question that assumption. Could it be that this species, given the right circumstances, is worth exploring from a sensory perspective? Does it have the quality potential that could make it a viable or even desirable alternative in the coffee market?

According to these researchers and coffee professionals, the resounding answer is: Yes.

Recently, the first ever coffee festival to focus on liberica took place in the city of Kuching located on the northwestern tip of Borneo. Instead of being an obscure curiosity, liberica was the headliner in the Borneo Coffee Symposium, hosted by Earthlings Coffee Workshop, that entailed keynotes on the species, cuppings and even a roasting competition. 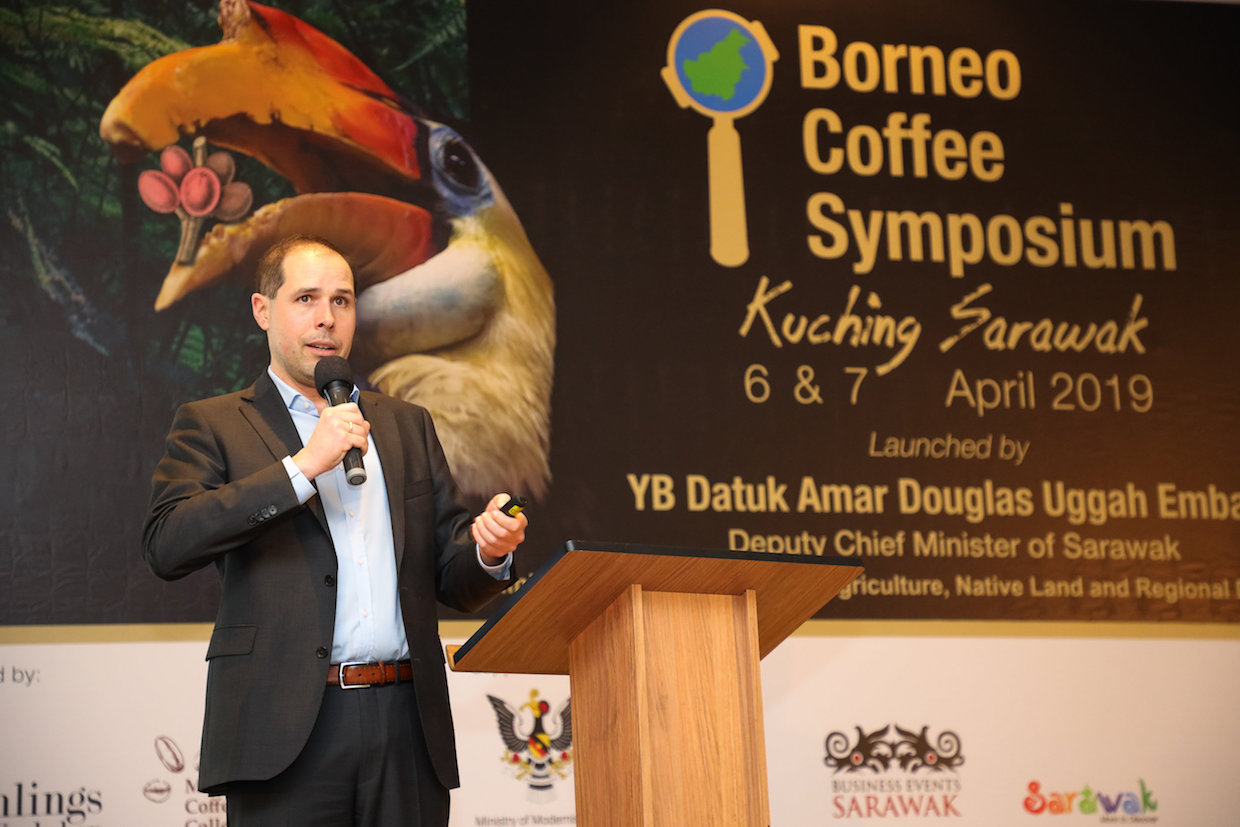 Before arriving on Borneo, I had never tried liberica before, so I arrived skeptical. However, having tasted the some fine examples of the species on the cupping table, next to expensive geshas and bourbons, I found that liberica was able to hold its own. The flavor notes were a mix of traditional ones, like dark chocolate and lemon, and more baffling ones, such as chorizo and jackfruit.

German coffee consultant Dr. Steffen Schwarz, who led the cupping, insisted that we progressed in ‘order of sweetness.’ That meant beginning with robusta, moving on to arabica, and finally ending with liberica.

Yes, according to the coffee scientist, liberica is, in fact, sweeter than arabica. After trying all the different cups for myself, I had to agree.

Arabica and robusta make up the vast majority of the world’s coffee trade. Liberica accounts for less than 1 percent, while only a few countries in Asia and Africa grow the species commercially today.

Being considered inferior to the already vilified robusta, liberica has never been on the radar of the specialty coffee community. Another issue is that liberica grows much taller than both arabica and robusta — a tree can grow up to 15 meters, requiring additional strenuous field work for potentially less volume. 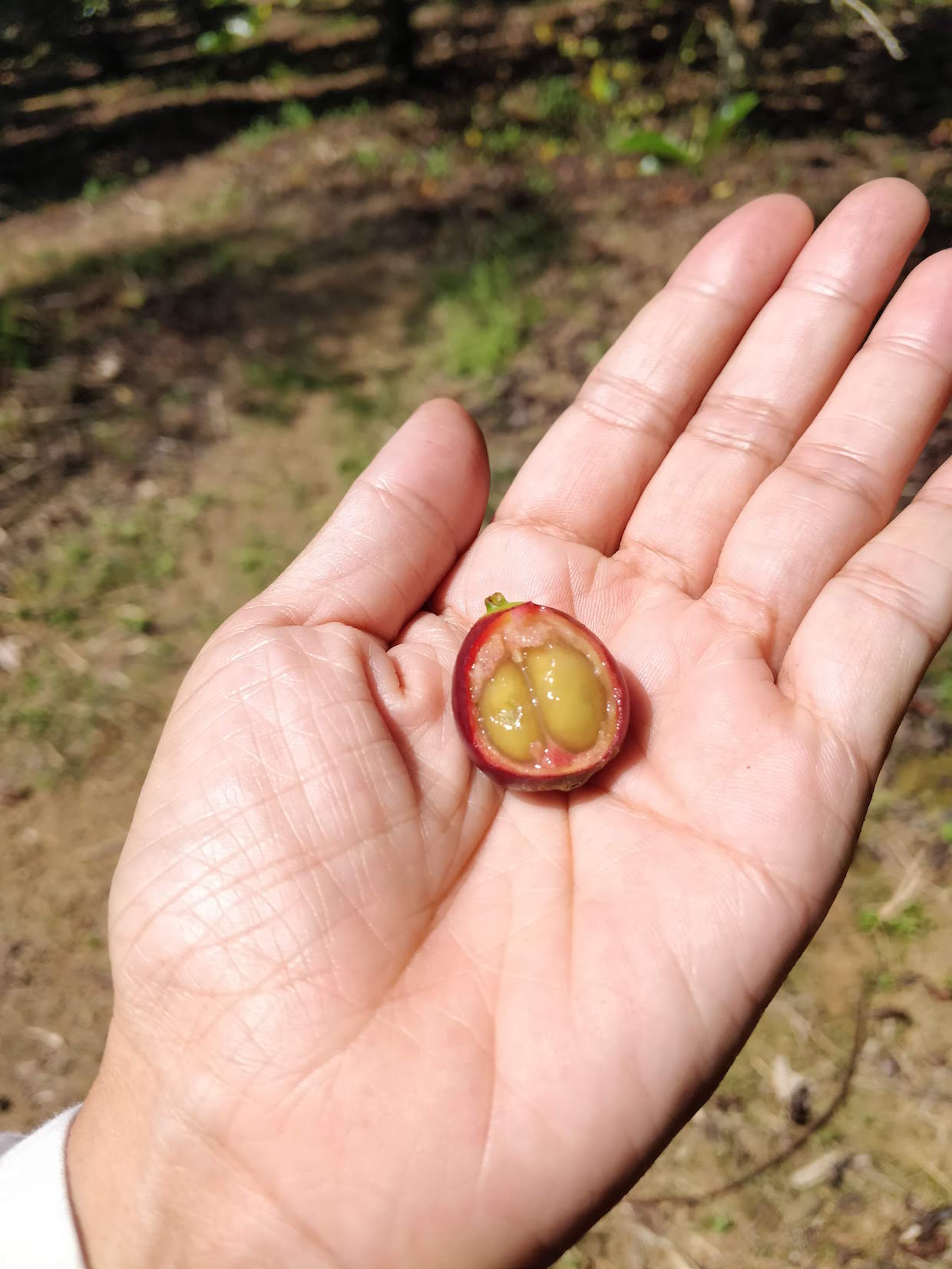 Yet Schwarz — who serves as the managing director of the German coffee research center and consultancy the Coffee Consulate, believes the species has been unfairly overlooked.

“I have always been skeptical of the way the coffee industry talks about species and varieties,” Schwarz told me at the event. “So much is just second-hand information with no foundation in science… When I began working in the coffee industry 24 years ago, there was almost no knowledge about liberica in spite of it being the third biggest species. However, this also made me very curious.”

One of the first things Schwarz noted about liberica was its foundations. Liberica, being bigger than both arabica and robusta, also has a much more extensive root system.

“People have this idea that robusta is very robust. However, in fact, its root system is shallow. This makes it susceptible to drought, low temperatures, and root disease,” he said. “The roots of liberica, on the other hand, go much deeper than any other coffee tree. You can grow it in almost any soil, even peat and clay. So when people say that robusta is the species that can handle climate change, they are wrong. Liberica is much more sturdy.”

Even with this knowledge, it took Shwarz a while before he realized that the flavor potential might be as promising as the genetic makeup. Working in green coffee, Dr. Schwarz kept encountering liberica trees, when visiting farms in different parts of the world. 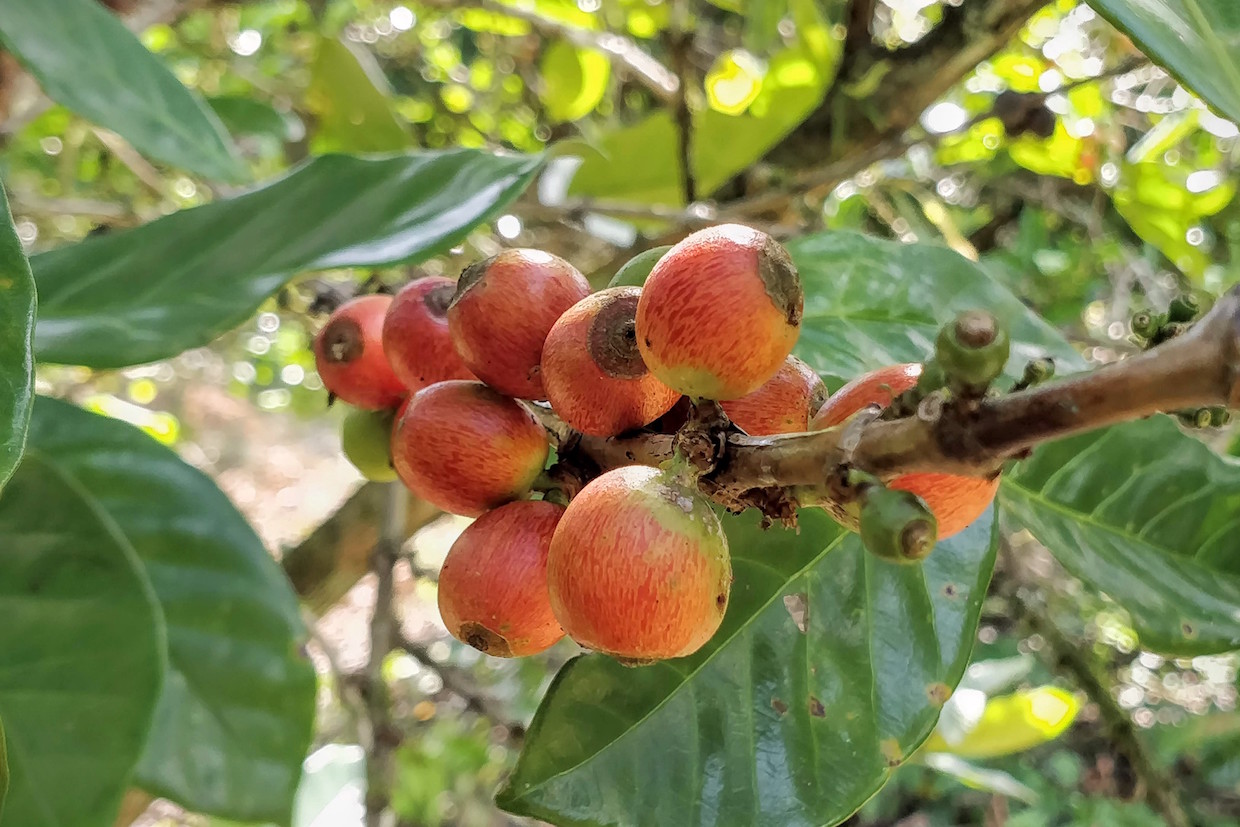 However, usually there would only be a few specimens scattered around at each farm, and often the farmers wouldn’t recognize them as libericas. Instead, they’d have local names. Eventually, Dr. Schwarz realized that the liberica was being used to lure the coffee berry beetle and others pests away from arabica — like a natural pheromone trap. At that point, Dr. Schwarz became very interested in the flavor potential.

“Insects don’t care about cupping score,” he said. “They only care about aroma and sweetness, so I realized that it probably had something to offer.”

From Trash to Treasure

The liberica tree has been growing semi-wild in Malaysian Borneo for ages. Old records suggest that coffee was planted there by British colonialists looking for fertile grounds after leaf rust had wiped out the entire crop of coffee in Sri Lanka in 1892. Coffee there was eventually abandoned in favor of more profitable crops such as tea, pepper and rubber. Only a few liberica trees remained.

“When we started in specialty coffee, we told the local farmers to cut down their liberica trees and try to plant arabica instead,” Rave Sun Kwok, co-founder of Earthlings Coffee Workshop, told me in Kuching. “We had been doing much training with the different specialty coffee associations, and all the so-called experts told us that liberica was disgusting and tasted like rubber.” 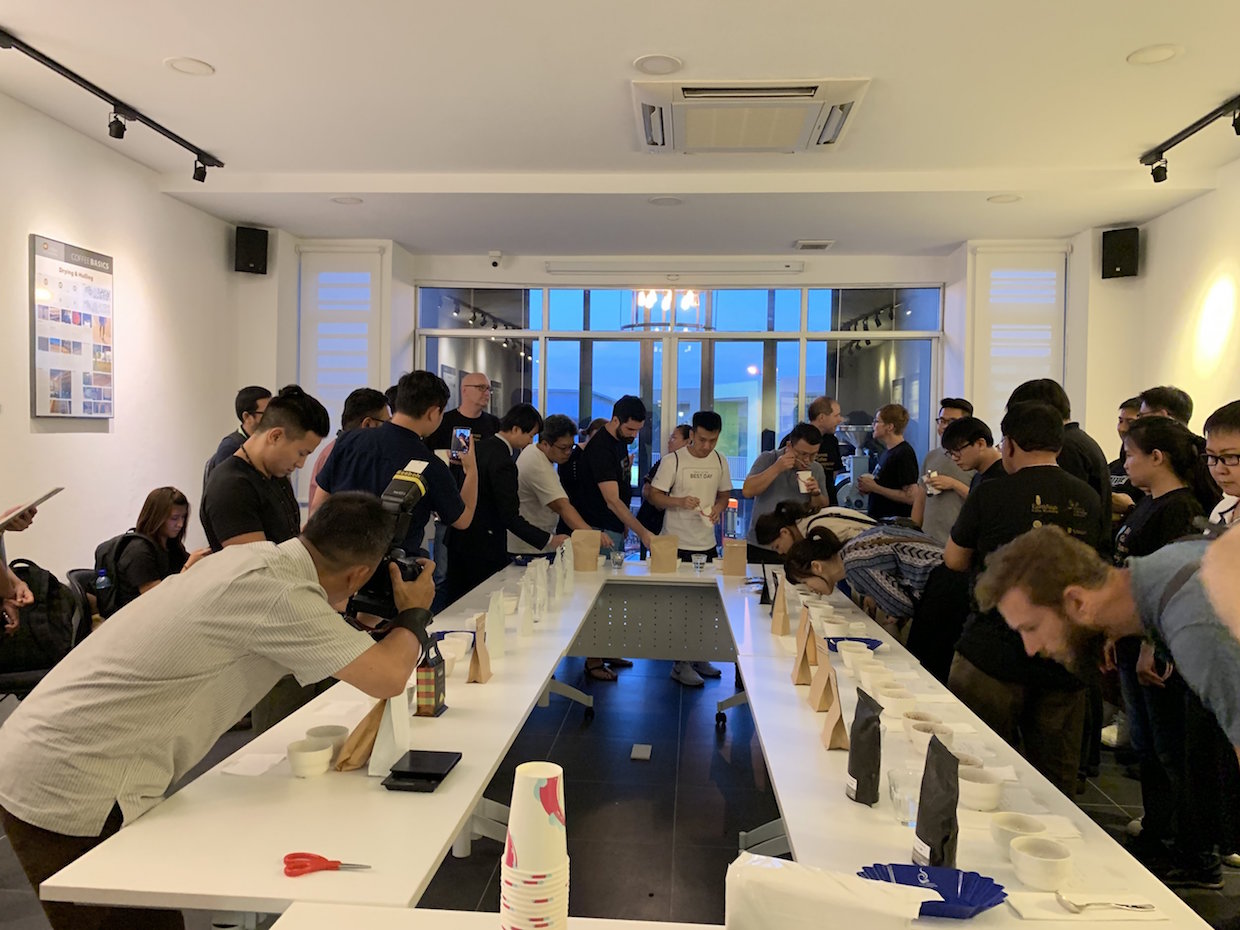 “He told us to stop cutting down the liberica,” Rave Sun Kwok recalled. “We immediately got on the phone with our farmer friend back home in Borneo, and said, ‘wait a minute.’”

The two Malaysian coffee professionals went home and gathered a range of semi-wild liberica. However, instead of processing and roasting them in the traditional ways arabica and robusta might be produced, they tried new methods suggested by Schwarz — methods that took into account liberica’s much higher sugar content in fermentation and roasting.

“Much to our surprise the beans came out very good,” Rave Sun Kwok said. “It was super sweet and fruity. Not like Ethiopian coffee or gesha, but in a different way. It had notes of exotic Asian fruits such as jackfruit, local mangos and banana, and even durian.”

In 2018 the specialty liberica from Borneo was presented to the world for the first time at the Stuttgart Coffee Summit in Germany, where it won a green coffee quality award.

Over the past few decades, coffee production in other Southeast Asian countries such as Thailand, Myanmar, Laos, Vietnam, and China has been an important economic driver, while production and and export revenue have generally increased in volume.

The people I spoke with in Borneo’s coffee industry realize that, as the global market is filled with arabica, liberica may present a viable opportunity for differentiation.

Schwarz thinks that liberica has an exciting future in areas close to the Equator such as Borneo. It doesn’t require the altitude of arabica, and it’s capable of thriving in almost any kind of soil. 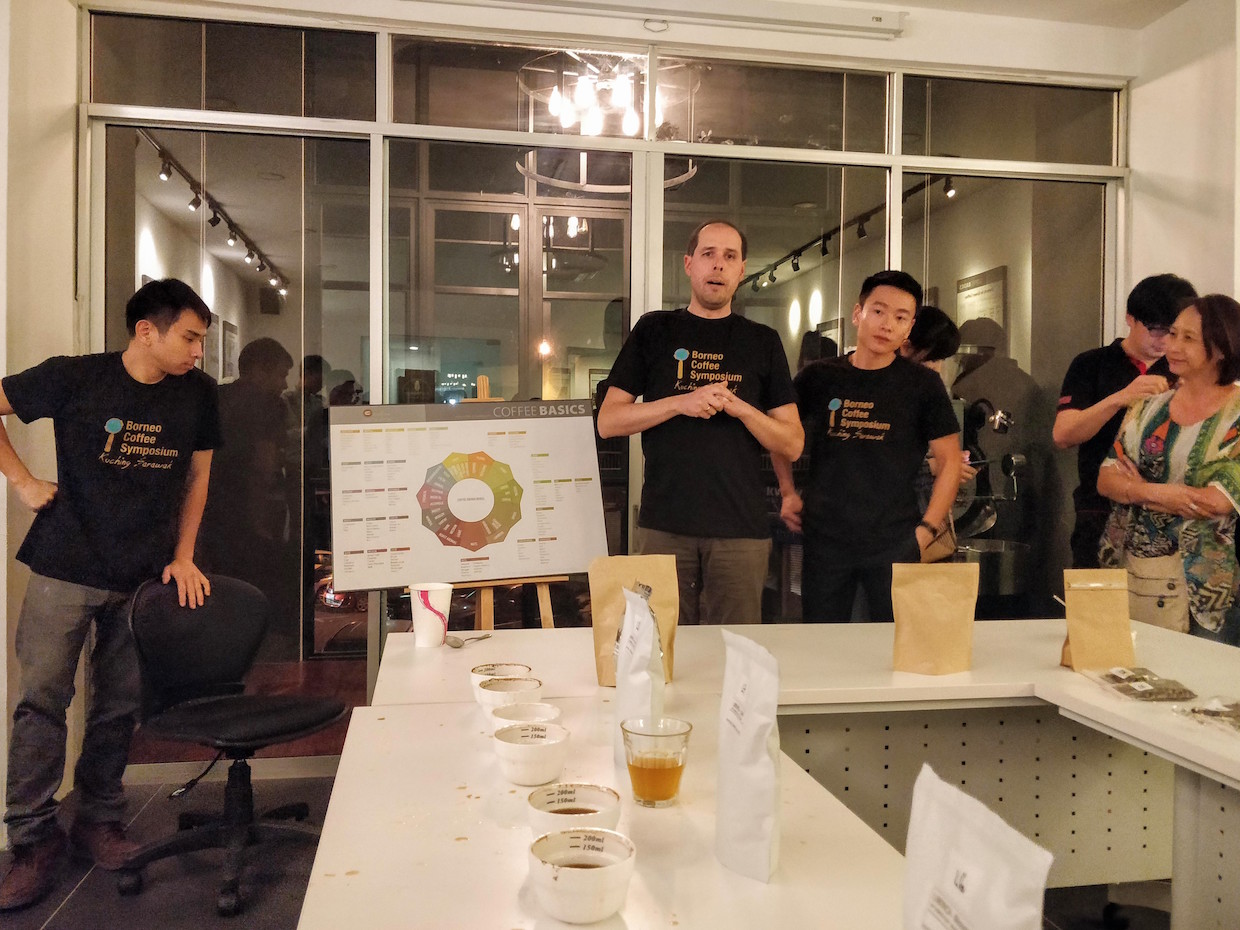 But does the world need a third species? Schwarz provided several reasons to answer yes to that question. On one hand, there’s always a need for sweet coffees, whether in blends, in cold brew or with milk-based or other mixed beverages.

“One of the best cappuccinos I ever tasted was made on pure liberica espresso,” he said. “It was like entering a new dimension of coffee flavors.”

However, there are also some promising scenarios when it comes to the future of coffee itself. For instance, arabica can be grafted onto liberica roots to create stronger and tastier coffee. There’s the potential for crossbreeding, where the genetic makeup of liberica could contribute to sweetness or plant strength in future hybrids.

In an era in which the potential extinction of arabica is all too real, it seems like perfect timing for liberica to emerge from the rainforests of Borneo.

Yes Liberica it’s an quality beans.. But also has the lowest production yield.. The questions is.. What is the reasonable price for farmer..

In Johor they grow Liberica Polysperm, yield is great. The problem with Liberica and Excelsa is processing. Buyers do not want to pay for quality, so harvesting and processing is bad. Both coffees can taste amazing if processed correctly.

Give mention and credit of the country where liberica got its name. Liberia in West Africa.

We have just launched a company called Guyana Rainforest Coffee. The beans we import is what we believe to be Coffea Liberica that also contains the DNA lineage of the original Typica from Yemen. This is based on analysis from a coffee scientist from World Coffee Research. If the Liberica beans are roasted correctly it’s an absolute wonderful cup of coffee. Dark roasted beans can only be consumed as black coffee or an espresso, adding milk causes the coffee to become extremely bitter, I know it’s highly unusual

Thanks for sharing the article. It’s really informative for me.