Pressure and Flow: A Guide for Espresso Technicians 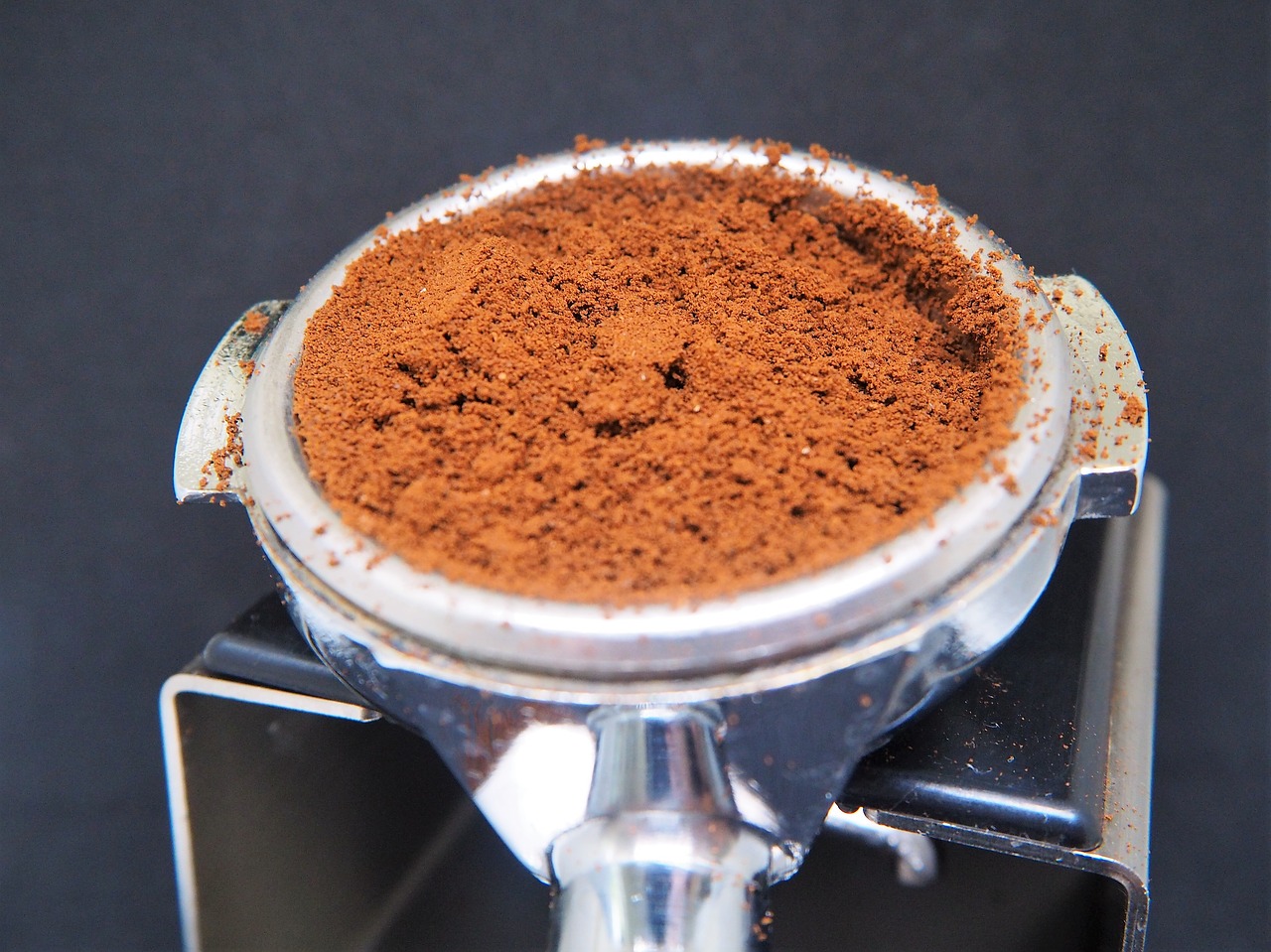 Understanding pressure in an espresso machine is straightforward in many respects. We have a few benchmarks for extraction that have been borne out of years of experience and we are fairly adept at generating enough of it for most machines, but it invariably comes down to flow rate into the cup that determines the quality of a shot of espresso.

I argued a couple of decades ago against using stop watches to judge barista competitions (if a judge can’t tell good from bad with their palette, a stop watch isn’t going to help), but we obsess about coming up with numbers for everything. Researching this article did lead me to backpedal in that criticism a bit. This article isn’t about what numbers are best but rather the effect of jets, tubing and temperature on pressure and what ultimately is happening in the portafilter.

There has been some recent interest in using variable flow rates to manipulate the extraction of coffee as opposed to pressure, but what isn’t clear is whether it’s merely using a different mechanism to achieve the same result. The core of the issue is whether the flow rate observed into the cup is evidence of a good extraction, or if proactively regulating the flow could have the same effect. Our experience with pods and pressurized portafilters would point to pressure being the more important factor, as pressure is needed to penetrate the cellular wall of the coffee. But varying flow rates can affect brew head pressures and can be a valuable tool in profiling. It really comes down to understanding the inputs that inspire the change.

Pressure requires two things to exist: something to generate the movement of water (the pump) and something downstream that tries to stop it. The power of the pump to move the water, and the resistance it encounters, determines the amount of pressure in the system — no restriction, no pressure. For example, the pressure of a fluid after its last restriction is always zero. It is the restriction itself that is necessary to build pressure, which means that if the outlet of the pump is wide open, it is not developing any pressure at all. In fact, the bypass is completely closed.

Espresso machines manipulate pressure in a couple of ways. The simple balanced bypass of the pump regulates water pressure to a fixed value — in most cases 9 Bar, provided that the inlet water pressure doesn’t exceed that value — and is a standardized set point from which all other values are calculated. It’s rather like establishing a level playing field for all of the groups to produce a consistent result. The pressure regulation from the pump uses a spring under tension that constantly adjusts to maintain stable pressure regardless of flow. However, it does require that the capacity of the pump and motor can keep up with demand.

The second device required to control pressure is the group jet. In addition to a separate purpose (detailed below), the jet provides enough resistance for the pump to maintain 9 Bar throughout the system on machines with multiple groups. Without the jets, merely flushing a second group or an unregulated boiler fill could drop system pressure sufficiently enough that other groups couldn’t properly extract espresso. Additional resistance resources can be a smaller tube, the pathways and diffuser plates in the group, flowmeters, and even the solenoid valve orifice — though not all machines have all of them. Until you put the portafilter in the machine to brew, jets are the key to regulating pressure and flow.

Water doesn’t compress — much. Its viscosity and density at stable temperatures are extremely consistent. What this means is that the flow of water molecules that can pass through an orifice is predictable. If you can measure the pressure on either side of a known orifice you can precisely calculate flow.

In an espresso machine, everything after the pump is a restriction of some kind. The reduced diameter of the pipe after the pump restricts flow but is usually insufficient to bring pump pressure to 9 bar. Additional restrictions in the same circuit reduce flow cumulatively and create a pressure drop after each restriction, but the values aren’t additive. Taken together, they all affect the flow rate capacity of the system, but the formulas don’t account for the order of mixed orifice sizes. This is kind of a grey area for the measured impact of larger orifices in between two that are much more restrictive.

The downstream effects of orifices are critical to machine function but have varying effect on extraction, depending on the conditions of the coffee bed. Because pressure drops in each cavity after the orifice, the jet creates not just a reduced flow, but a low-pressure environment after each orifice and ultimately in the brew head above the coffee. Multiple points of restriction temper fluctuations in pressure like a shock absorber. These restrictions also force the pressure in the head to build gradually so that water saturates the filter bed evenly before extraction begins.

The pressure increases as the coffee filter bed begins to saturate with water because resistance increases. As the flow rate of the water is lower through the puck than the cumulative rate of upstream restrictors, their impact on pressure approaches zero. Because pressure after the last restrictor is always zero and everything feeding the circuit from the pump is stable, the coffee puck becomes the sole factor determining how much pressure accumulates in the brew chamber.

With stable pump pressure, jets and restrictors can be used to profile the pressure in the brew chamber as it builds, but it only profiles in one direction. They cannot reduce flow or brew head pressure during the extraction process. Jets are valuable in regulating pre-infusion, by slowly building pressure in the group to saturate the coffee. But if we want to reduce pressure towards the tail of the extraction like a piston lever machine, we can’t. Once the brew process begins, everything is fixed.

But do we want to? Pressure is required to penetrate the coffee and extract, but there comes a point where we want to carry away what was extracted without scouring every last bit from the coffee. Easing up on the pressure changes what we pull from the coffee at different stages and along with moderating temperature dramatically changes the espresso.

This is where manipulating the rate of extraction comes into play. Changing the flow rate during the extraction changes the extraction pressure because of the tight relationship between pressure and flow. There are a number of ways to do it, including gear-driven variable-speed pumps for each group, servo-motor-driven piston assemblies, or even a variable proportioning valve between the pump and the group. The small orifices required make the latter a bit difficult to precisely regulate, but could provide good results without buying a $30,000 machine.

Everything so far is about pressure and flow in a single circuit. From a technician’s or engineer’s standpoint, however, there are additional challenges with multi-group machines. Pump motors and pumps have to be designed around the intended use of the machine. Putting a 100 liter/hour pump into a busy shop with a three-group machine means that it will struggle to maintain pressure when all groups are running. Pressure drops are significant and easily observed on the gauge. A pump with greater flow needs a lot more power to run, especially when only one group is running, because its laboring to move so much water that it even the balanced bypass struggle to keep up.

Circuits in parallel effectively increase the flow rate the pump has to deal with. The motor doesn’t have the ability to run faster to keep up with demand. Watching how your client uses the machine under load may require additional training so they avoid flushing with two groups running or staging the shots. Every machine is different, but if a tech replaces the pump with one of lower flow, it can be an issue.

When we use a pressure-testing portafilter to set expansion valves, sometimes the pressure rises one bar above the pressure measured on the gauge. If everything in the machine is fixed and regulated, what is going on?

Heat doesn’t just make steam; it also expands water. Heat from heat exchangers and the use of dedicated boilers increases pressure between the pump and the brew chamber and in both directions. The same orifices that inhibit flow to the group also temper the flow from expansion. Because water is highly incompressible and all machines now use check valves before the pump, the only place for the heat-related pressure to expand is into the portafilter gauge. You will often see a small increase on the machine gauge, but not as dramatic.

This is why we adjust expansion valves to vent slightly with a blind portafilter just as the heating elements turn off. This is highest heat and pressure the circuit will experience, and the expansion valve needs to vent without affecting normal brewing pressures. Without expansion valves, solenoids fail and heat exchangers like to burst.

Everything the espresso machine tries to accomplish comes down to consistency, to delivering consistent temperature profiles, pressures and flow rates to every group, time after time, with no unforeseen fluctuation. The machine needs to be the straight man in the show. We spend a lot of time dressing it up and tweaking every detail, but it really needs to deliver the same thing every time.

The only variable in this whole process should not be the espresso machine, but the grinder that sits next to it.

The last restriction of flow in the machine is really the only one that counts: The coffee filter bed. It’s much lower flow rate reduces the effect of upstream orifices to near zero. If the flow of through the puck is too great, the upstream orifices will come into play and lower pressure in the brew chamber. This is why, in the diagram below, the restriction of the puck is V (variable). Ensuring consistent quantities, particle sizes and distribution is the single most important factor in espresso quality.

In the process of writing this article, I did have an epiphany. While my old-school approach to judging coffee meant making fun of people timing shots — I still think if you don’t know a good shot when you see it you should find another career — the precise relationship between pressure and flow means that timing shots actually is a viable measure for extraction. In a properly calibrated machine, shot flow is evidence of proper brew chamber pressure.

It also means that trying to regulate flow without measuring extraction pressure in the head is pointless. 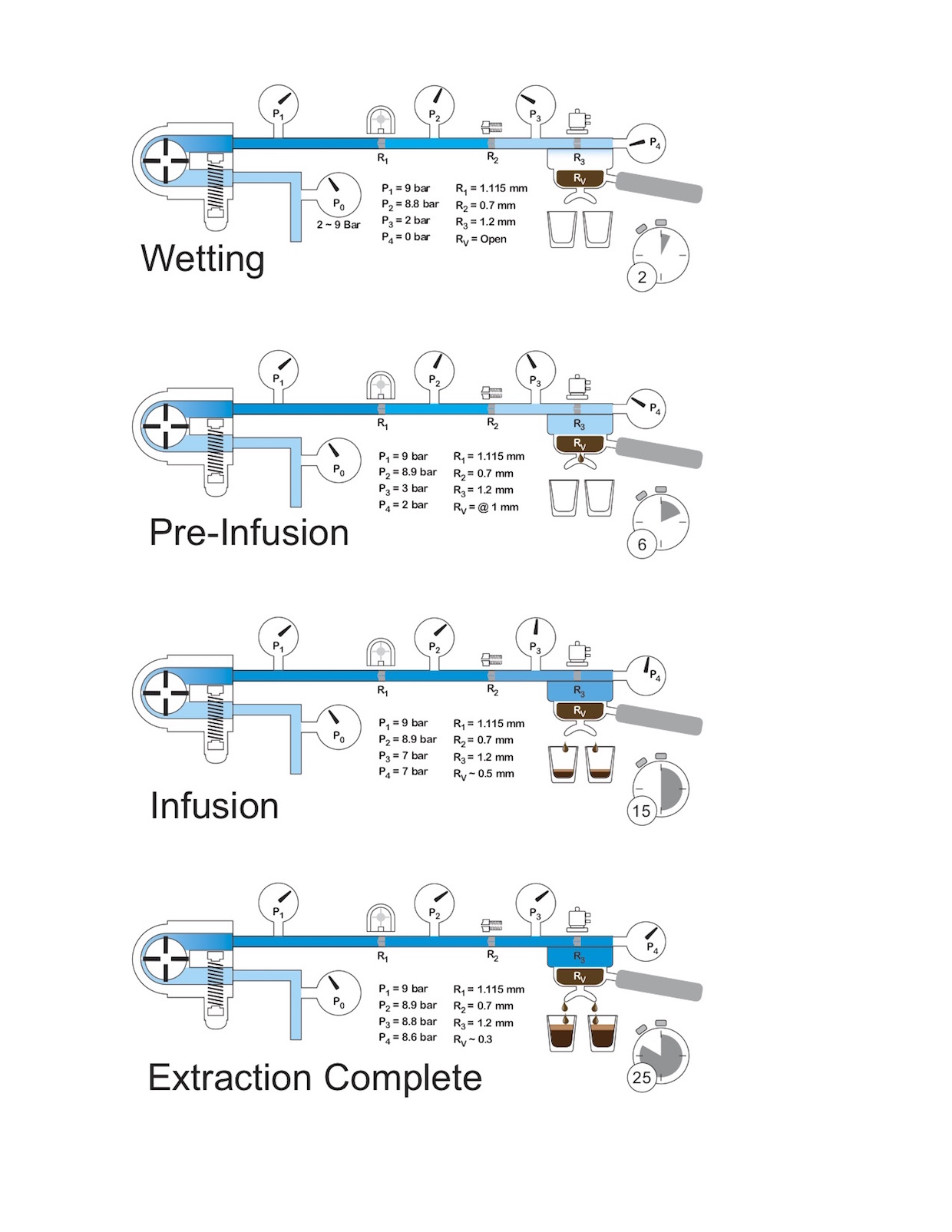 The circuits above are meant to illustrate the changes in pressure through the orifices common to most espresso machines, from the initial flow of water through completion of the shot. With the exception of P1, all pressures are representative of the orifice’s effect and not actual samples or calculations. The tubing size, style of fittings and geometry of the circuits all play a role, every machine is different, and the formula required is too complex to for this discussion.

[Editor’s note: Michael Teahan is a longtime espresso equipment technician and coffee equipment designer based in Los Angeles. This article is appearing as part of an unpaid editorial collaboration between DCN and the Coffee Technicians Guild. It was originally published in the CTG blog and is republished here with permission. The Coffee Technicians Guild (CTG) is an official trade guild of the Specialty Coffee Association (SCA) dedicated to supporting the coffee industry through the development of professional technicians.]