In West Michigan, Aldea Coffee Grows Along with Income for Coffee Farmers 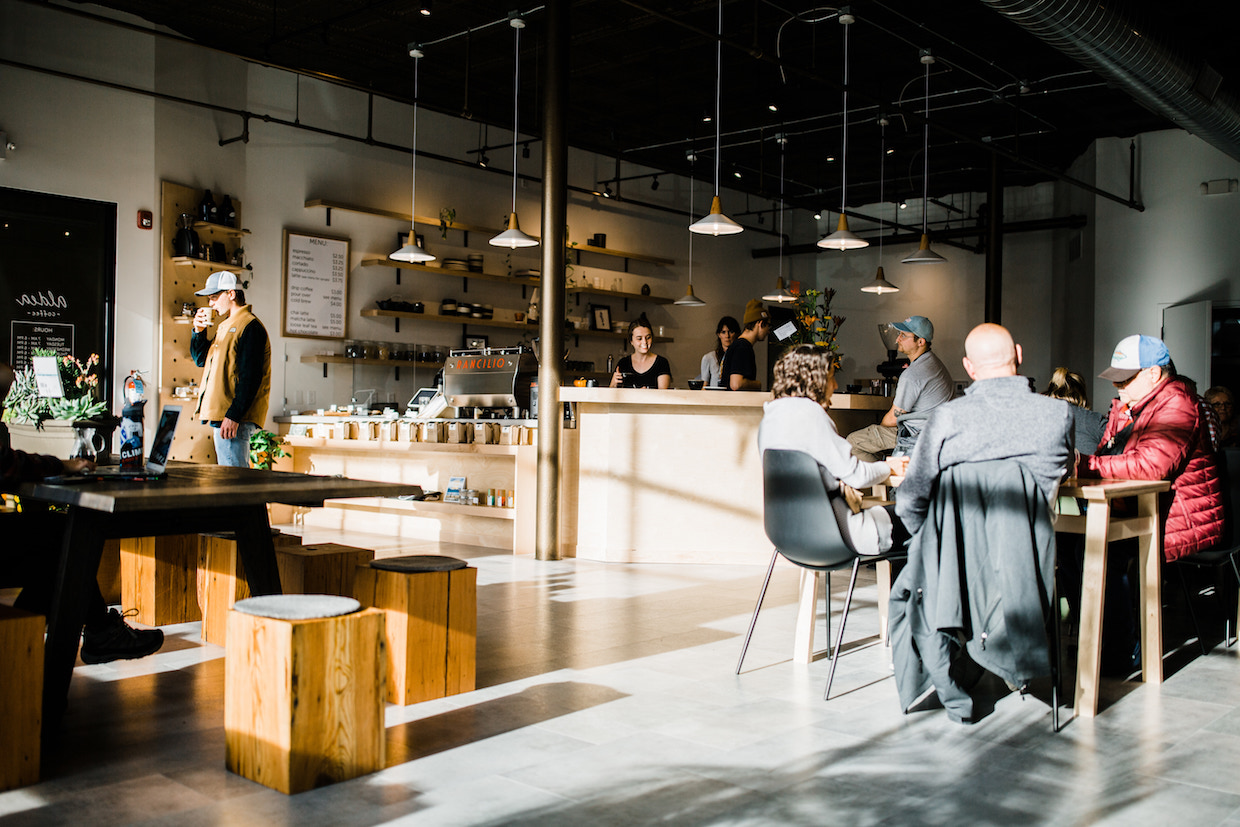 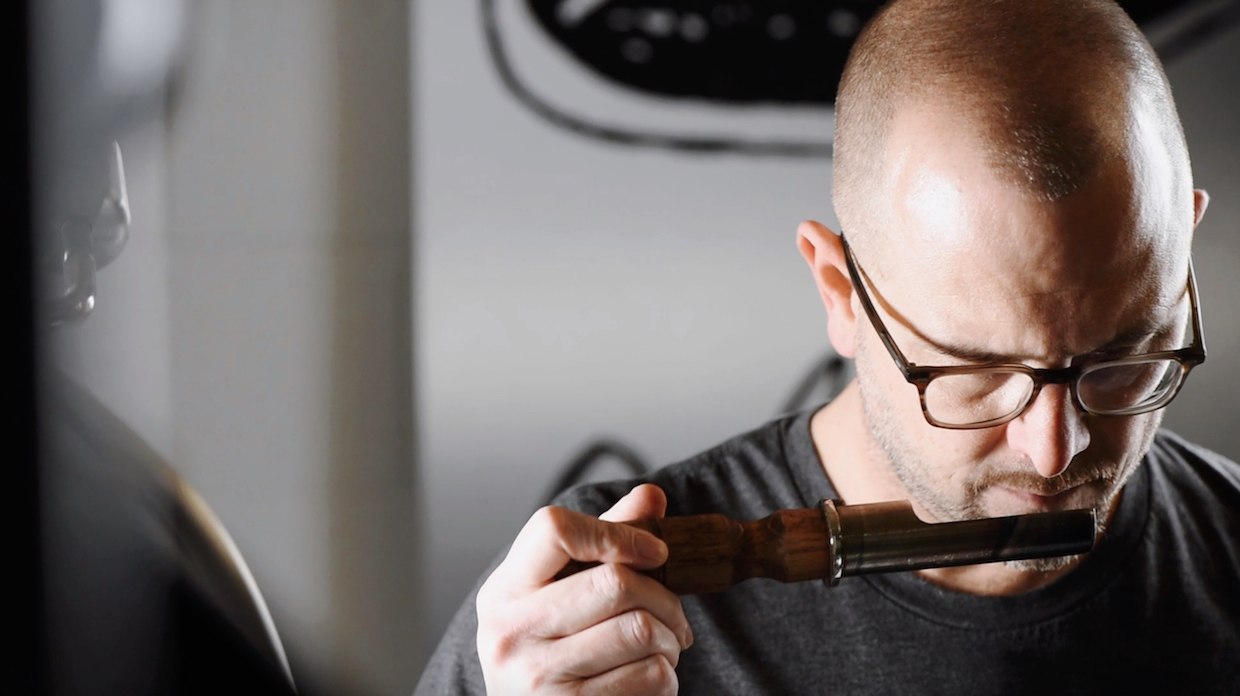 “We provide loans in the form of equipment and agricultural inputs, primarily fertilizers, but also coffee depulpers, solar dryers, grain mills, etc.,” Miller told Daily Coffee News. “Cash loans are not an option we currently offer, and there are no plans to do so in the future. Interest is paid bi-weekly, with the principal being repaid at harvest. We want the farmers to maintain control over who they sell to, so the loan program is separate from the coffee purchasing program that we have. All loans are repaid in the form of local currency, and never as a part of the harvest. We want farmers to maintain control over where they sell their crop, and so we intentionally do not combine the coffee purchasing and microloan programs.”

In the 10 years since its founding, Aldea Development has distributed approximately $350,000 in loans, according to Miller. Repayment rates vary by year, but have consistently remained above 95%. The development arm also provides producers with access to markets for their coffee or other products, as well as partnership in a variety of community projects. 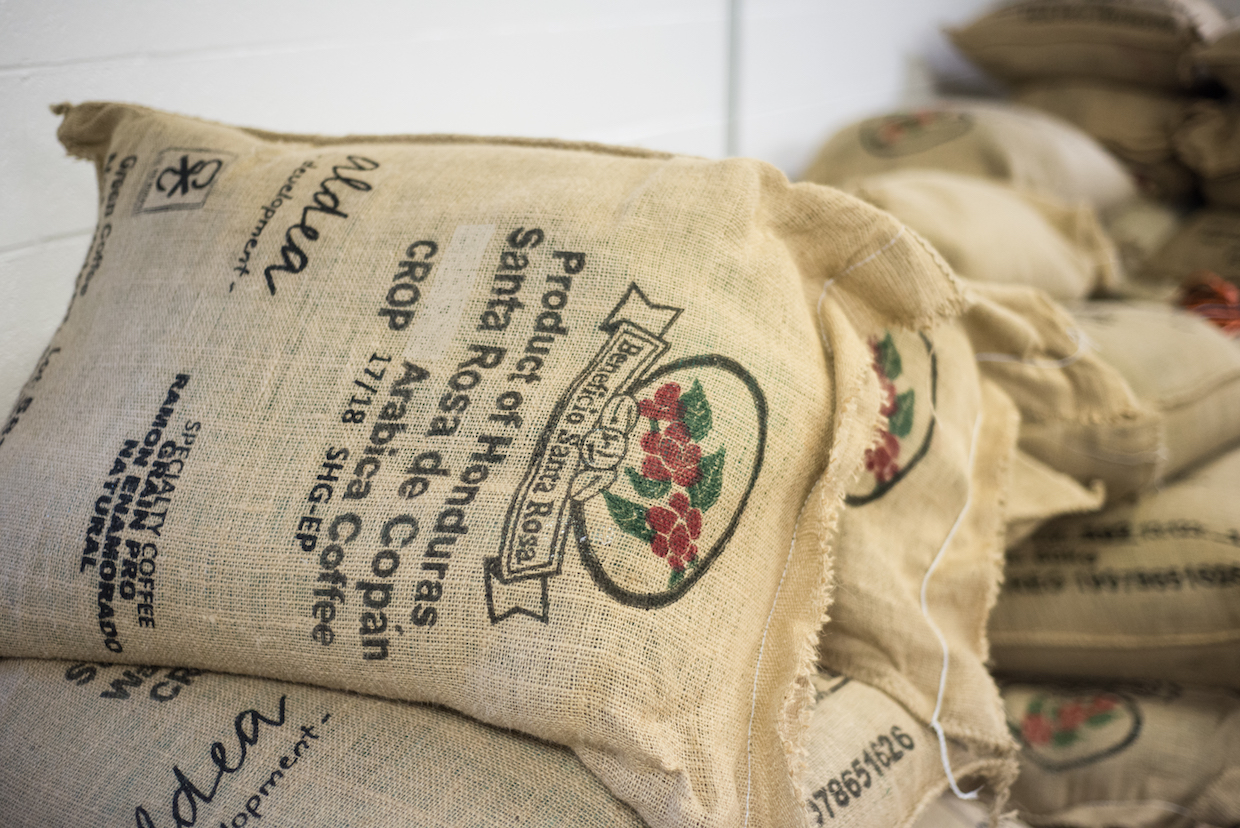 While a farm’s involvement with Aldea Development has no bearing on whether its coffee is served in Michigan, all of the coffees that pass through the Diedrich IR12 at Aldea’s 5,500-square-foot Muskegon Heights production roastery are purchased at above Fair Trade prices from individual farmers that Aldea Development works with in Honduras, the company says. Be that as it may, co-owner Jeremy Miller said it’s the quality that drives those purchases first and foremost.

“Our programs are entirely independent from one another,” Miller told Daily Coffee News. “Our coffees are purchased based on quality, and are blindly scored multiple times before purchasing.” 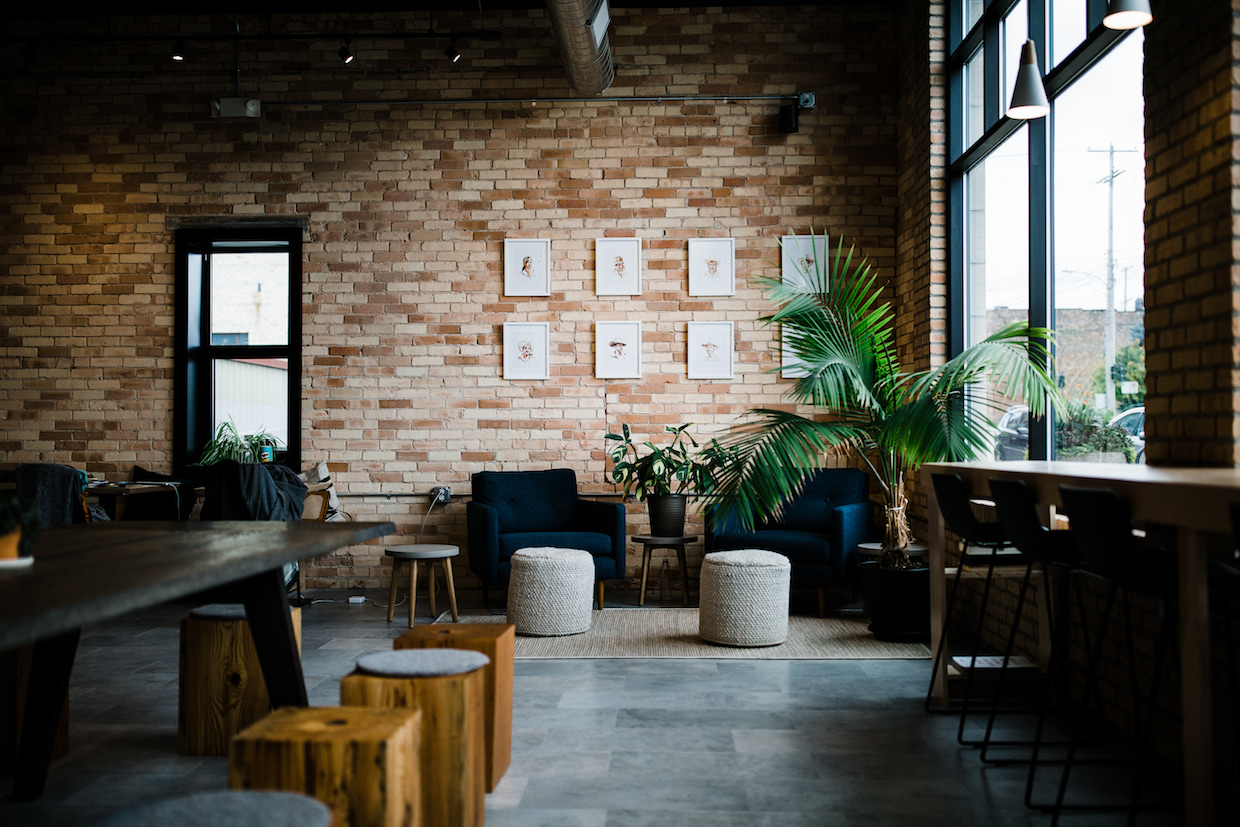 Coming 10 years into the work Aldea Development and four years after Aldea’s first coffeehouse in a century-old building in Grand Haven, the new cafe blends an equal sense of history and identity with a clean, bright Scandinavian spirit of transparency and order.

Exposed brick walls and bar tops made from wood reclaimed from Brunswick bowling alley lanes are elements that carry over from the first shop, while custom wood block stools are made from a beams reclaimed from the Chase Hackley Piano Factory that stood in Muskegon from 1890 up until two years ago. 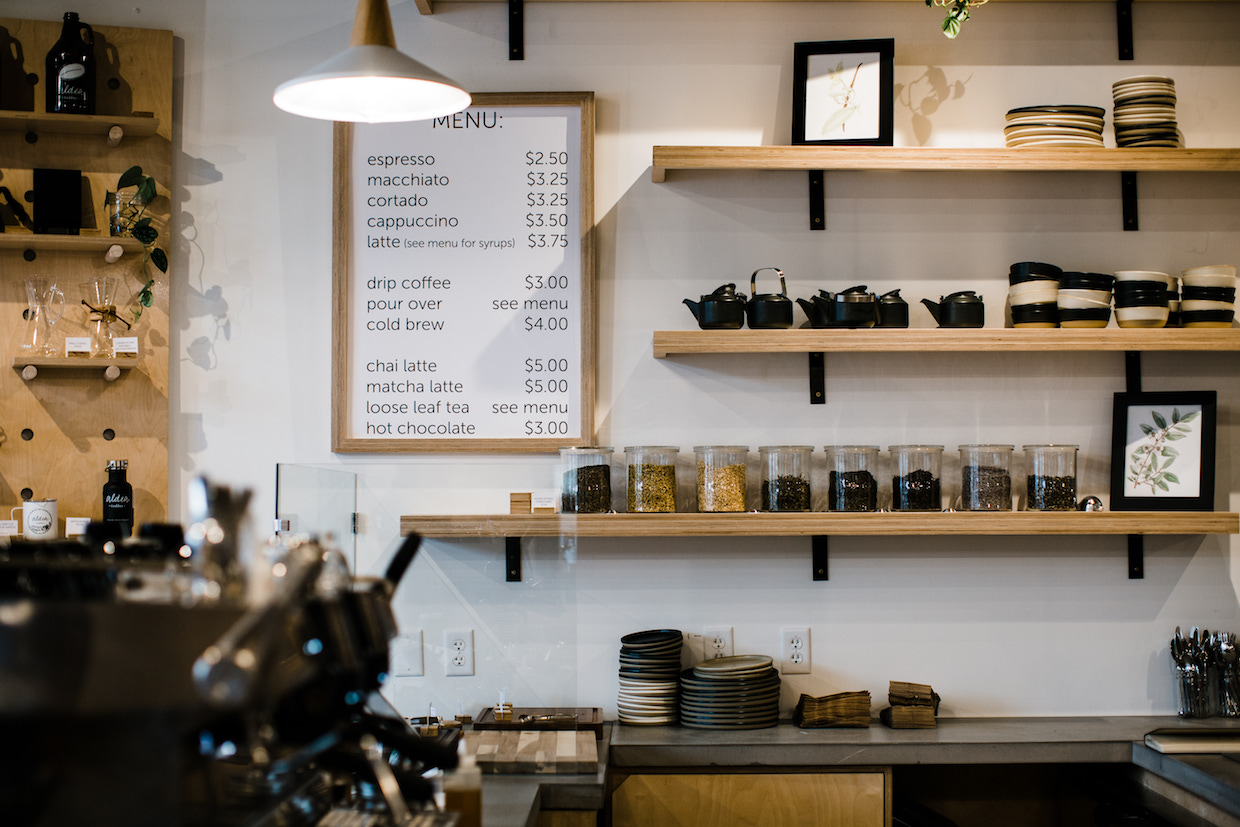 “The history of Muskegon is important to us as a team, since many of us grew up here,” said Miller. “We built everything in the cafe ourselves, including all the tables and cabinets made from baltic birch, and our hand-poured raw concrete countertops. The project was truly a labor of love.”

Atop the concrete counter of the 1,800-square-foot cafe now stands a Rancilio Specialty RS1 paired with a Mahlkönig Peak grinder. An EK43 grinds for manual Hario V60 brews and mechanized batches by way of a Fetco XTS system. 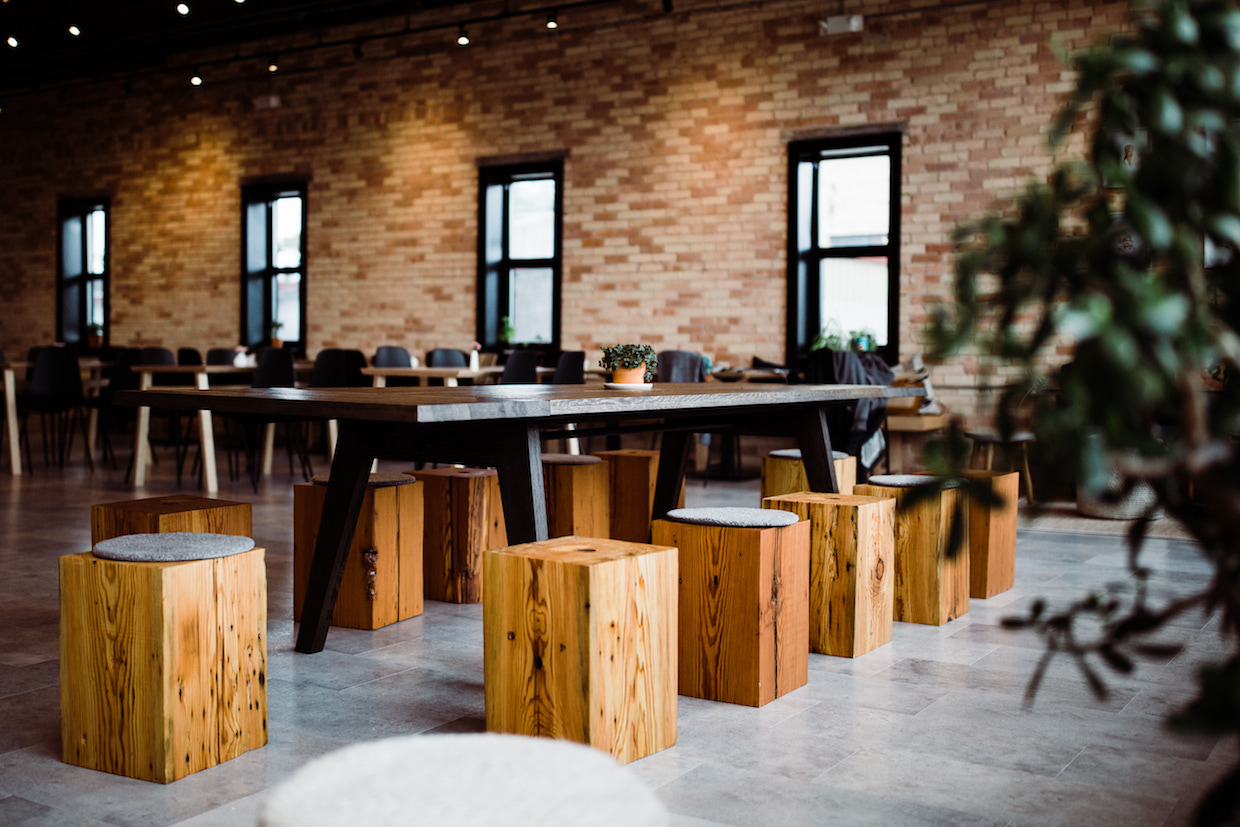 Miller said that a limited retail bar will likely be built at the roastery within the next year, prior to an additional full-on cafe sometime in the more distant future. The coffee company intends to expand its offerings beyond Honduras soon, while also growing its wholesale business. And as the coffee business grows, so grows Aldea Development.

“The primary way we support coffee farmers is by purchasing their coffee, especially as the world coffee market has been experiencing its most recent downturn,” said Miller. “During this time, Aldea Development has continued to pay farmers consistent prices, well above Fair Trade prices. The growth of Aldea Coffee’s retail and wholesale business puts more money directly into the hands of farmers.” 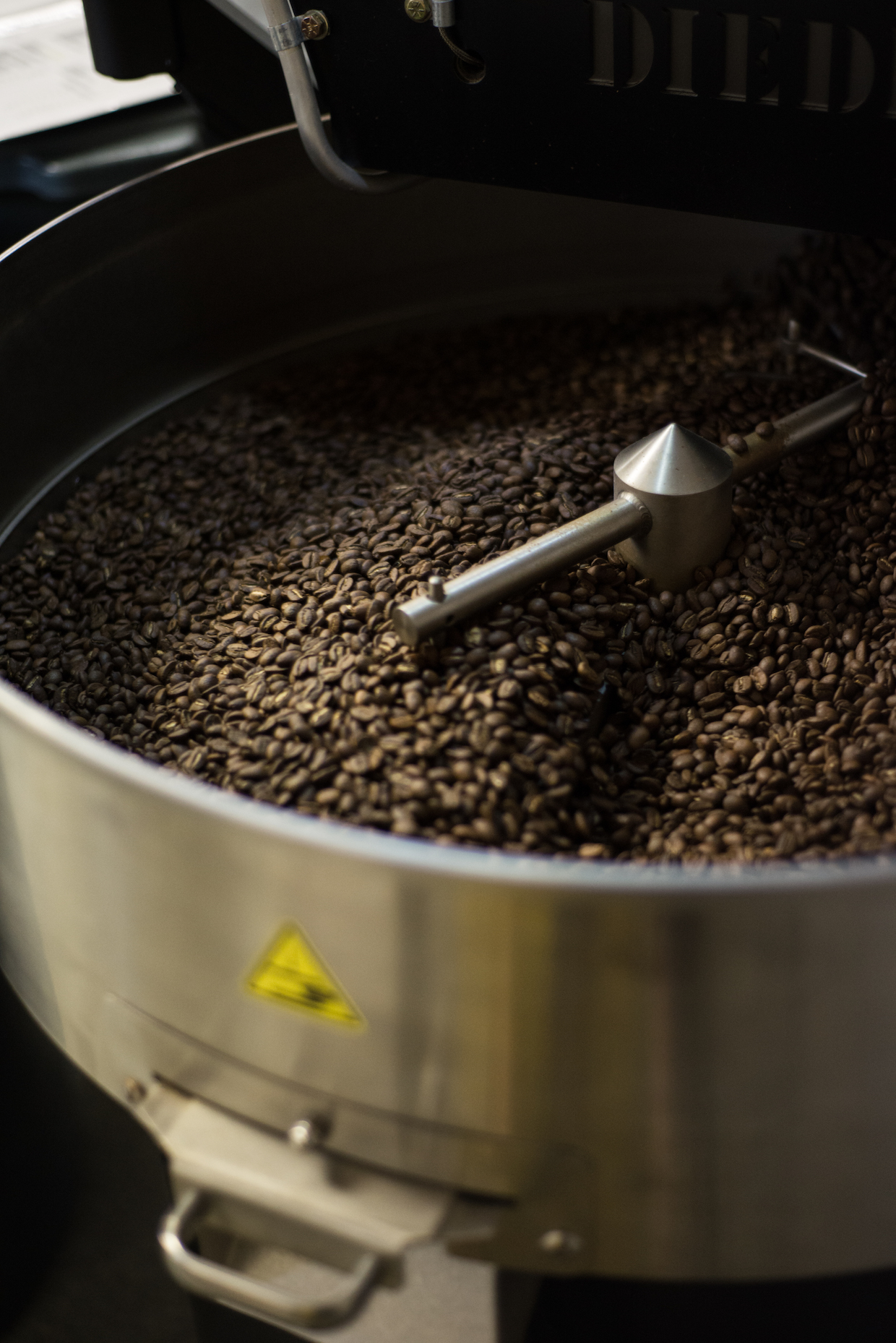 At the Aldea Coffee roastery in Muskegon Heights.

My first time coming there was and experience. My friend/ “Caseworker ” introduced me to this place , now l am hooked on your company . I had a chocolate coffee . Yum yum