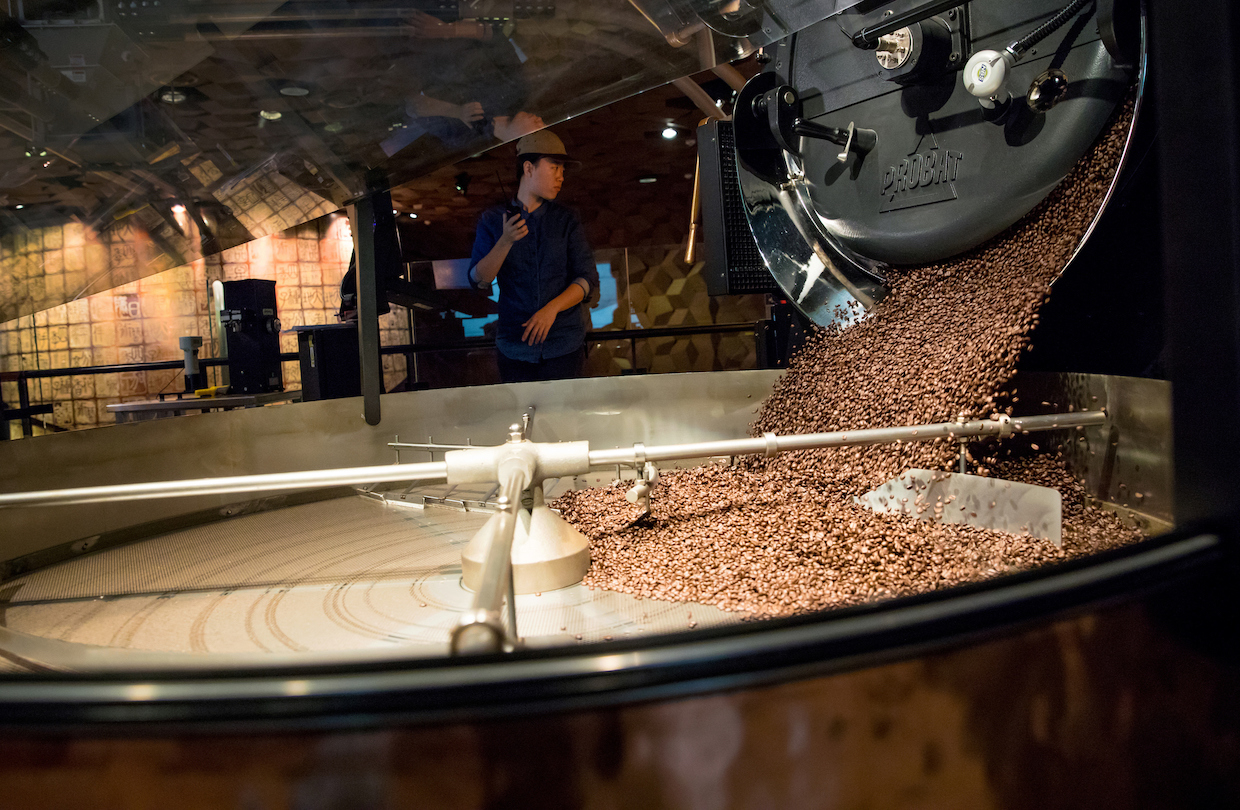 The Starbucks Reserve Roastery in Shanghai, which opened in 2017. Starbucks press photo by Joshua Trujillo.

Starbucks has announced plans to invest $130 million for a production facility in China called the Coffee Innovation Park.

It would be Starbucks’ first large-scale production roastery in what is now the company’s second largest retail market, China, where the company plans to have 6,000 stores by 2022.

Also planned to open in 2022, the facility is expected to include a roasting plant, warehouses and a distribution center. As of March 13, construction was expected to begin later this year in the city of Kunshan, northwest of Shanghai. Starbucks has not forecasted any construction delays due to the coronavirus pandemic.

Despite being in the Chinese market for more than 20 years and having approximately 4,300 stores there, Starbucks has not to this point operated a large-scale production roastery in the country, according to the company.

Outside of its Reserve-brand roasteries — including one about an hour away from the proposed facility — Starbucks currently operates five production roasteries in the United States and one in Amsterdam for all of its European distribution.

“We recently announced a bold multi-decade aspiration to become a planet positive company — a company that gives more than we take from the planet,” Starbucks CEO Kevin Johnson said in an announcement last week. “China is one of our most important markets and The Coffee Innovation Park is an important, strategic investment that has a positive impact on our carbon footprint and supports our long term sustainability goals.”

The Starbucks announcement follows an industrial roastery groundbreaking from its largest retail competitor in China, Luckin Coffee, that took place in January.

Just another reason not to go to Starbucks.

Don’t care for their coffee. That’s a good thing. I’d help them close up the shops they hold here in America if they take their employees with them!
Anti American companies have made themselves millions and that’s capitalism. ONLY in the USA and then resent the very country where the opportunities exist! Shame on them!
Happy Easter!

That ends SB for me which includes packing up those trashy cups. Long live the memory of the first SB in Seattle. It will never be the same now.

I know a better place where Starbucks can invest… Rwanda!!! Pull your head out out of the sand Starbucks.

I quit supporting Starbucks when they started sending big donations to the Democrat party. This just enforces it.

Seriously China? I have been a daily customer even while I didnt agree with thier agenda. But I haven’t been there in weeks due to virus. I will NOT be back. America first and foremost 🇺🇸

WOW! after seeing what china has done to America these past number of weeks, and now SB is opening a roasting company there?????!!! So long, SB, you finally drove me away!!!

i agree ,i will have to invest in a coffee pot

Why don’t they put it in a country like Colombia or Brazil that actually GROWS the best coffee beans in the World
I dont drink coffee,, but the thought of CHINA producing the coffee sounds like the Product will go Down Hill

There are plenty very good coffee companies in the USA., so us all tell Starbucks where to go. To China where they can poison people without any repercussions.

I became a nonfan of Starbucks when they refused to send coffee to the soldiers stationed far away in Afghanistan. It was a small request from a soldier at a time when he needed a touch of home while on the front lines. But by then the big coffee company decided that it was too great a sacrifice to bag up some to send to this homesick soldier. Stick it where the sun don’t shine STARBUCKS.

I’ve been a customer for more than 10 years. Everyday habit sometimes twice a day. It’s time for a change!!

Won’t be that coffee. Hope they don’t sell a cup.

I will never buy their coffee ever again!

I agree, any company that donates to the DNC, I’ll boycott as well. I drank a Starbucks one when I drove over the road in an big rig. Only because it was in the truck stop.
“YUK NASTY COFFEE”!

That’s it for me and Starbucks. On a more positive front, they probably won’t have the same problem with the homeless and mentally ill as they do in the US. China don’t play that game, choosing instead to take those folks out back and shoot ‘em.

Sad that any company that was made successful by the US will embrace China these days, especially after Wuhan.

One would think Starbuck’s would want to support AMERICA. Well, perhaps if they had a different CEO……….

Please reconsider. Bring that business to the USA.

No more Starbucks for me.

Jees O Pete, Did you guys and gals even read the above article?? It says China is their 2nd largest market. They are building a roasting operation in the company cause it makes perfect sense. Why not build there so they do not have to ship it all and incur extra costs? They already have many plants here in the Good Ol USA and it looks like one in another country (Was it Belgium?) to supply their European storefronts. I agree that their coffee isn’t the best (tastes kind of burnt), but to act like they are some kind of traitor just for expanding into a very prosperous and growing market over seas is a bit Over reaching I think. Please reread the entire article and understand that Starbucks is still a VERY AMERICAN company.

You’re missing the point. After what China has done we shouldn’t be investing in ANYTHING there. We shouldn’t do business with China at all anymore. There are better options.

SB has focused on competition and conquering market share. Greed develops. Now China?!…. EVERYONE BE DONE WITH STAR BUCKS! I have them up last year. I LIVE my Counter Culture coffee and Chemex pour-over… foam and all!

I don’t support communism in any form. SB wants to develop that market, fine. I don’t have to support it. There are ample opportunities to expand in Free World Countries.
I see no reason whatsoever their burning desire to hire communist workers.
AND their coffee is waaay over-priced and not all that great.

That does it for me. After this virus has decimated the world(and they knowingly did it), I won’t be supporting SB again.

Hmmm…..it does not say they are closing the 5 roasting plants here in the USA and moving everything to China. They are building one in China to serve their stores in China. So why would you boycott then? They are still roasting at 5 different plants here for the USA stores. My daughter has worked for Starbucks for almost 5 years with benefits! Better than Walmart or most fast food places.

We need to stop going to McDonalds or stop buying from any businesses that we have in China ! This is getting ridiculous. He is not moving his business folks.

I cannot believe this. Kicking us when we’re down. Don’t worry, karma is great. Trump 20/20

Shove your shit you call coffee up your ass you deserve to go out of bussiness!!!

You have the right to do business wherever you wish. BUT SO DO WE!!!!!!

If they proceed with this, I am done with Starbucks. There are other coffee shops that need my business.

Is this thread full of right-wing bots? It’s absolutely incorrect to read this article and think that Starbucks is shifting all production to China. Starbucks is creating CIP to supply coffee to China FROM China. They are not abandoning America… lol.

For those saying invest in other origin countries–they do. They partner with CI and use CAFE Practices to promote industry-leading relationships and quality.

I love my neighborhood coffee shops AND I love Starbucks. To all the ill-formed haters, at least TRY to pretend like you know what you’re talking about 🙂