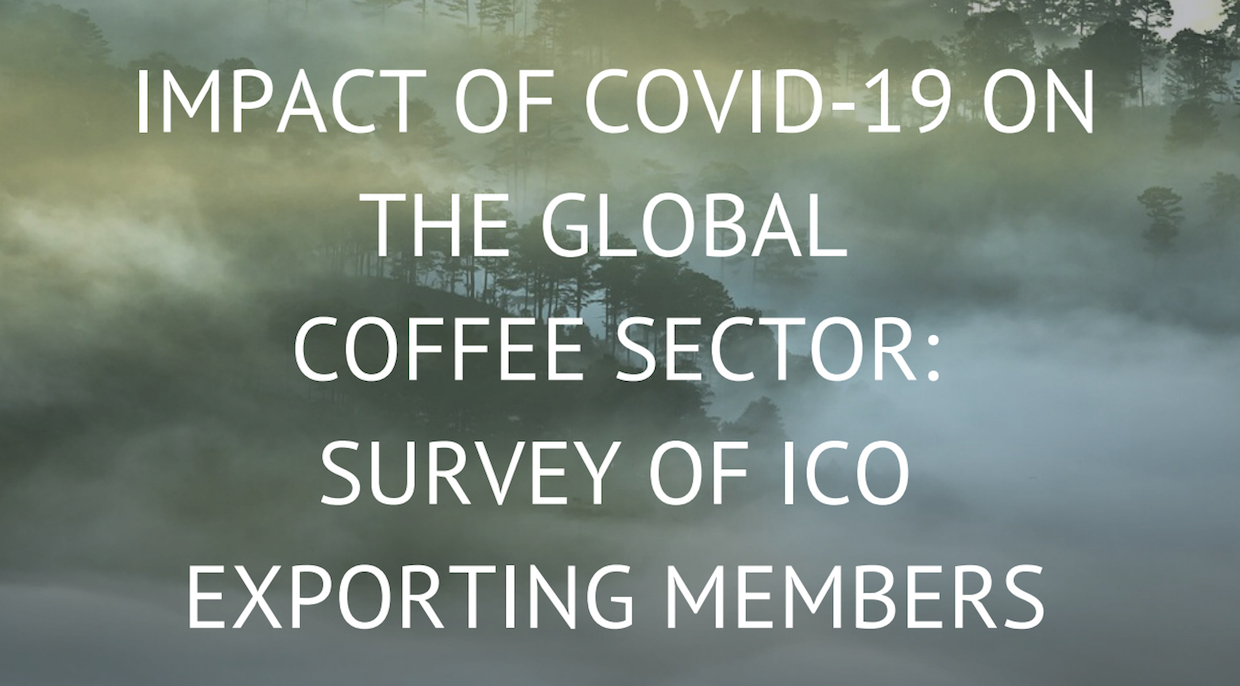 The COVID-19 pandemic will continue to affect coffee supply chains as farmers and producers expect to experience prolonged labor shortages, increased production costs, diminished infrastructure and a reduction in commitments from buyers.

These are some of the takeaways from an International Coffee Organization report on an expansive survey of coffee exporting country representatives from 16 countries accounting for approximately 85% of the world’s production.

Overwhelming majorities of these producer representatives reported that COVID-19 has or may negatively impact operations and exports, while they expressed uncertainty about how national production capacity will be affected over the next six to 12 months.

Furthermore, a majority of respondents expect diminished household incomes for coffee farmer families, labor shortages that may precipitate increased child labor and demand uncertainty as domestic consumption dips and international buyers shy away from new contracts, according to the ICO analysis.

All of this comes as global coffee prices remain at crisis levels, often not meeting costs of production at the farm level, while many national currencies are becoming increasingly diminished against the U.S. dollar. As of this writing, the ICE arabica futures price for September contracts (i.e. the “C price”) was a paltry $1.030. 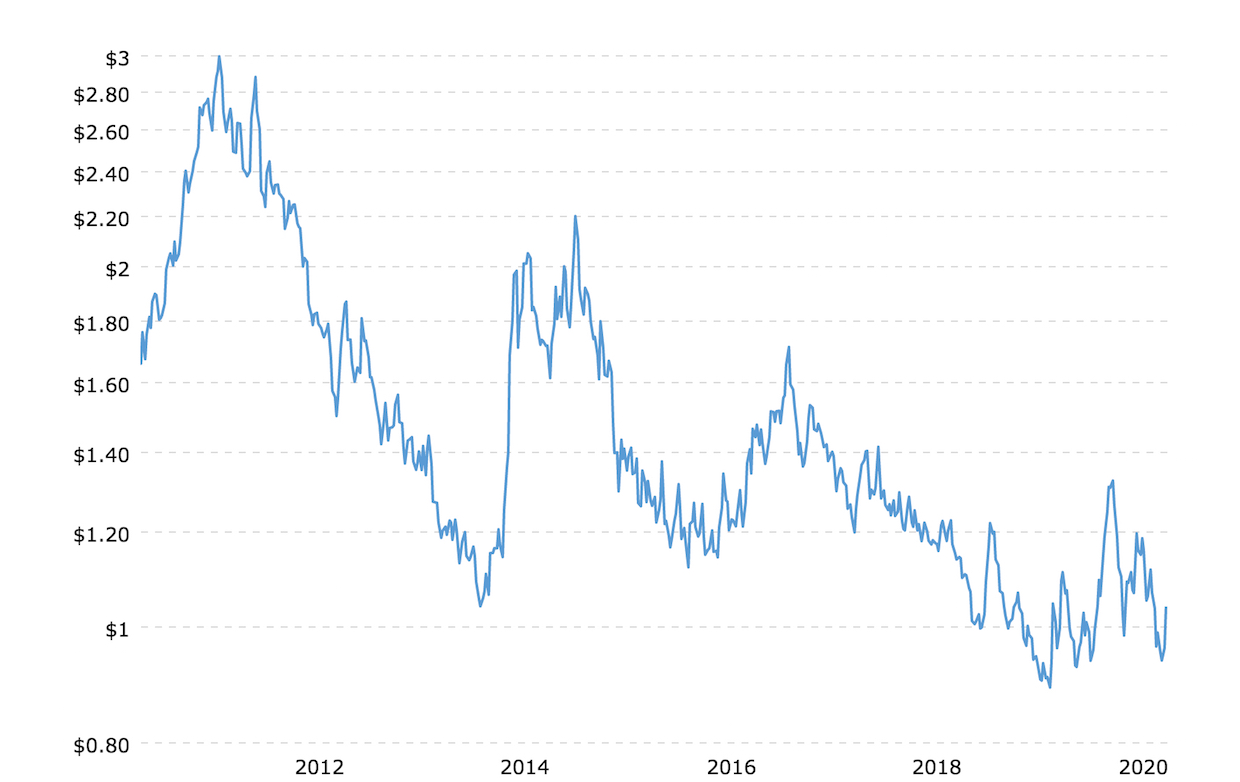 The ICE futures price for arabica coffee (i.e. the “C price”) shown over the past 10 years. Image courtesy of Macrotrends.

The ICO report is the third in a series the London-based organization has released regarding the effects of the novel coronavirus pandemic on global coffee markets and producers.

In April, the group analyzed how a global recession might affect global coffee demand. Last month, the group documented the price volatility in the coffee market, while warning of the effects it may have on the most vulnerable populations in the coffee supply stream. This third report, capturing the sentiments of exporting country representatives during a survey period from May 20 to June 1, paints an even dimmer picture of the coffee sector at present and in the long term as the pandemic carries on, threatening the resiliency of coffee producers.

The full report contains a wealth of valuable data and visualizations, but here are some of the key findings:

Major Takeaways from the ICO Survey of Coffee Exporting Countries

One of the most common refrains among coffee producers since March has been concern regarding how social distancing requirements and travel restrictions may affect the availability of farm labor, particularly among farms that rely on large groups of migrant workers as harvesters.

According to the ICO’s analysis of the survey, “the covid-19 pandemic has affected labour supply, either directly due to illness or indirectly as the movement of farm labourers and migrant workers is limited by social distancing measures, lockdowns and travel restrictions.”

The group also said that respondents said the pandemic has resulted “in delays of shipment as well as increased trade and transaction costs.”

In regard to the overall health of national coffee sectors, the ICO stated that a majority of respondents expect negative effects in regard to employment, total revenue, domestic consumption and export volumes. 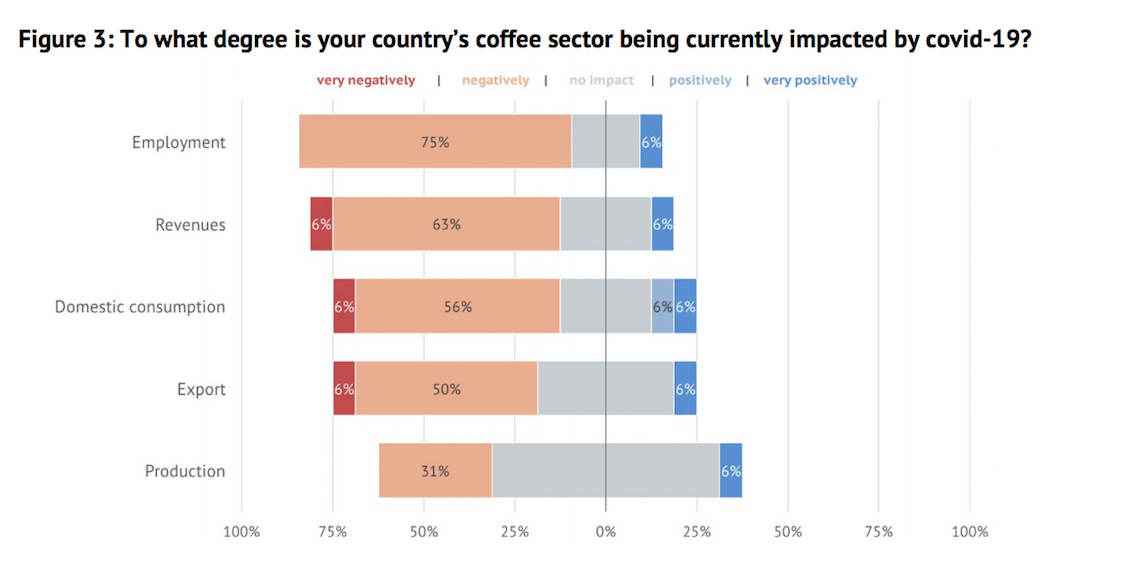 Respondents generally had a negative outlook regarding household incomes in coffee-farming communities, with 70% of countries predicting decreased income from coffee and other activities, despite rising costs for production, for food and for healthcare. This, along with diminished access to seasonal labor, may result in several negative consequences, the report suggests.

“Households struggling with uncertainty and diminishing income may reduce investments in sustainable production and climate resilience,” the ICO stated. “Some may — out of necessity — revert to harmful coping measures, such as child labour, a phenomenon being detected in other agricultural sectors with higher prevalence of unethical labour practices.”

One potentially bright spot within the report was the perception that coffee processing and milling are not expected to suffer due to pandemic restrictions.

“Exporting countries are most concerned about the impact on internal logistics as well as on export infrastructure and processes, such as port operations, container availability, distribution and commercialization and customs operations,” the ICO wrote. “Coffee milling and processing on the other hand appear to be less affected or vulnerable with 19% and 37% of the respondents expecting an improvement over the next six months.”

While all but one of the 16 responding countries reported existing nationwide efforts to assist the coffee sector through COVID-19, what was notably absent from the report was a positive sentiment regarding the attitudes of international coffee buyers.

A full 45% of respondents reported that contracts had been canceled or changed due to the pandemic, a statistic that underscores the risk dynamic in the coffee trade that makes producers far more vulnerable than buyers.

“The concern expressed by almost half of the respondents that sales contracts were cancelled or changed requires attention,” the ICO wrote. “In this regard, positive examples of buyers supporting coffee producers to minimize the negative socio-economic impact on farmers and their families should be highlighted. In addition, more long-term contracts could increase resilience and sustainability of the coffee sector in the future.”