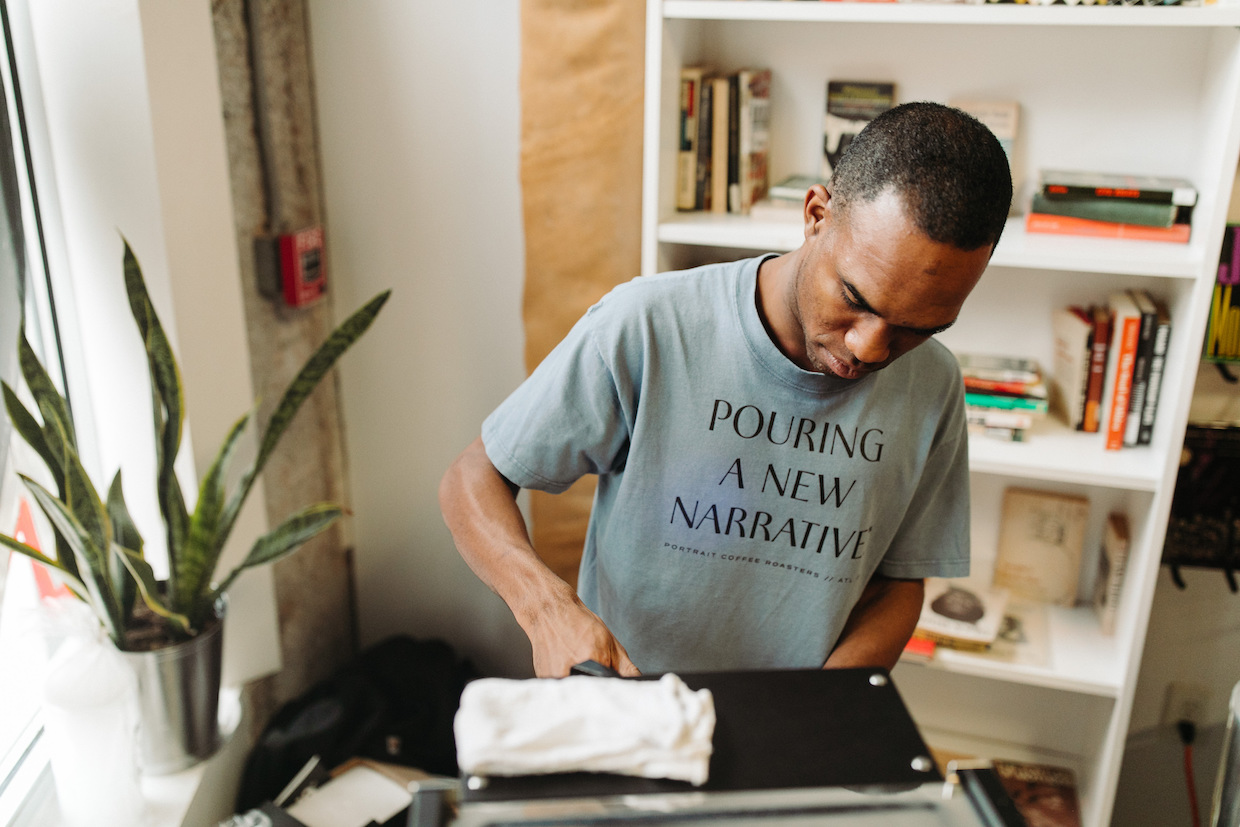 Atlanta’s historic West End neighborhood is one of the oldest in the city, known for its stunning array of architecture along with a rich history of Black culture and small business entrepreneurship.

Yet for many existing residents, particularly Black people, the West End can also be an “opportunity desert,” according to John Onwuchekwa, pastor of the West End’s Cornerstone Church and one of six founders of Portrait Coffee, a new specialty coffee roastery with a West End cafe in the works.

“Folks who have been here their whole lives are being pushed out of the city because of property taxes,” Onwuchekwa told DCN. “I saw coffee as a good way of supporting the community and changing the perception people have about coffee… I saw it as a great way to highlight Black and brown stories.”

Last year, Onwuchekwa partnered with Marcus Hollinger, Khalid Smith, Shawndra Onwuchekwa, Aaron Fender and Erin Fender to form a combined ownership group with a range of experience in creative, social and business fields. The group raised more than $30,000 on Kickstarter to finance the build-out of the cafe, in addition to the $50,000 Aaron Fender received from Google for Startups Black Founders Fund.

A primary focus for the coffee startup is on creating meaningful career opportunities for Black and brown folks locally. 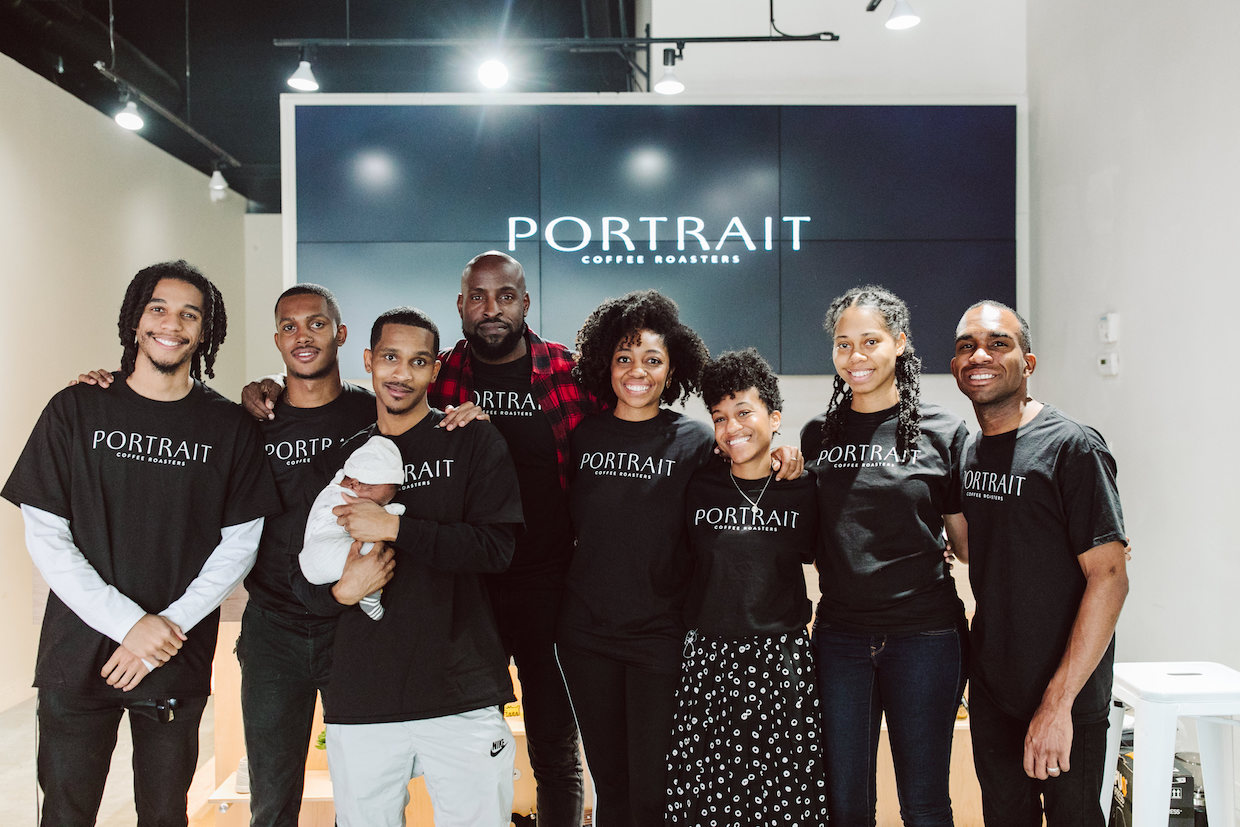 “With coffee, you don’t have to jump through any hoops or go through the ranks of internship,” said Onwuchekwa. “You don’t need traditional college. What we can teach people is coffee — importing, exporting, roasting, logistics, business — all of it.”

Onwuchekwa and the team coined the phrase “Pouring a New Narrative,” while the Portrait name is designed to challenge the visual imagery that often dominates specialty coffee.

“Coffee isn’t some proverbial birthright. Everyone can join in this party,” he said. “We want to change the picture that comes to mind when you think of coffee… Coffee grows where Black and brown folks grow.”

Timing for the roastery cafe was delayed following the February crowdfunding campaign that ran straight into the COVID-19 pandemic. As the company continues to prepare the retail component that is currently scheduled to open Jan. 1, 2021, it has also dived full-speed into roasting, including launching an e-commerce website.

Onwuchekwa referred to a popular article from this Spring called “Leading Beyond the Blizzard,” which reframed the business climate for the COVID-19 era.

“It basically describes that we’re in an Ice Age right now — not a blizzard or a storm,” Onwuchekwa said. “So that’s basically how we treated the situation, like an Ice Age. We have to be in it for the long term.”

While production roasts have so far been led by Onwuchekwa and Fender on a friend’s machine, the Portrait team recently purchased a 15-kilo Mill City Roasters machine that will be used in the roastery cafe.

Portrait also pivoted away from hosting pop-ups to focus more on e-commerce and online subscriptions. The team has been hosting Instagram Live interviews with Black entrepreneurs, artists, and coffee professionals, such as Black & White Coffee Roasters Co-Founder and past United States Barista Champion Lem Butler. They also started a coffee delivery service.

“We wanted to provide what we called digital hospitality,” said Onwuchekwa. “We just found ways we could still engage and connect with our customers and our community.” 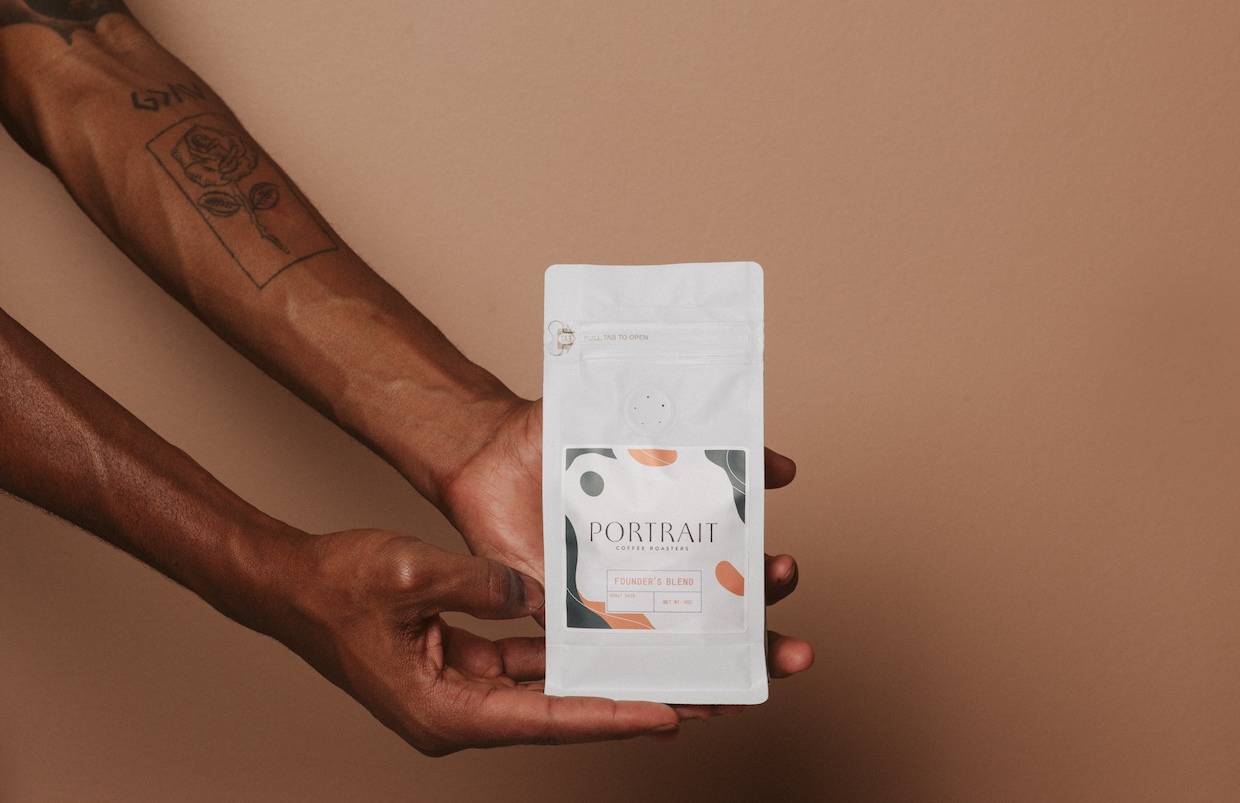 Among portrait’s range of single-origin coffees, some prominently feature the names of influential Black and brown figures in America. A Red Bourbon variety from Rwanda described as sweet and fruity is called Barry, a nod to both its tasting notes and to filmmaker Barry Jenkins. Named after poet Toni Morrison, the Toni is an “unapologetically chocolate” natural-process coffee from Brazil.

I love stories of black entrepreneurship and black people succeeding, not necessarily in spite of the odds, but because of them. Because the truth of the matter is that black people have always succeeding because of the adversity, not in spite of it. Out of Slavery and other forms of oppression that America has put upon black people, have come many of the best and brightest minds the world has ever known along with some of the greatest people the world has known. Men and Women like Harriet Tubman, Sojourner Truth, Madame CJ Walker, Maya Angelou, Granville T Woods, Garrett Morgan, Frederick Douglas, Alonzo Herndon, Herman Russell, Barry Gordy, John H & Eunice Johnson, Reginald Lewis, Martin Luther King, Maynard Jackson, Andrew Young, Tyler Perry, and many others. The list is just too long to name. But anyway, I just so much love and relish at the triumph and resilience of black people, we’ve overcome and succeeded unlike no other people in history. The African American Community is the most resilient community on Earth, next to the Biblical Children of Israel. That’s the Damn TRUTH.