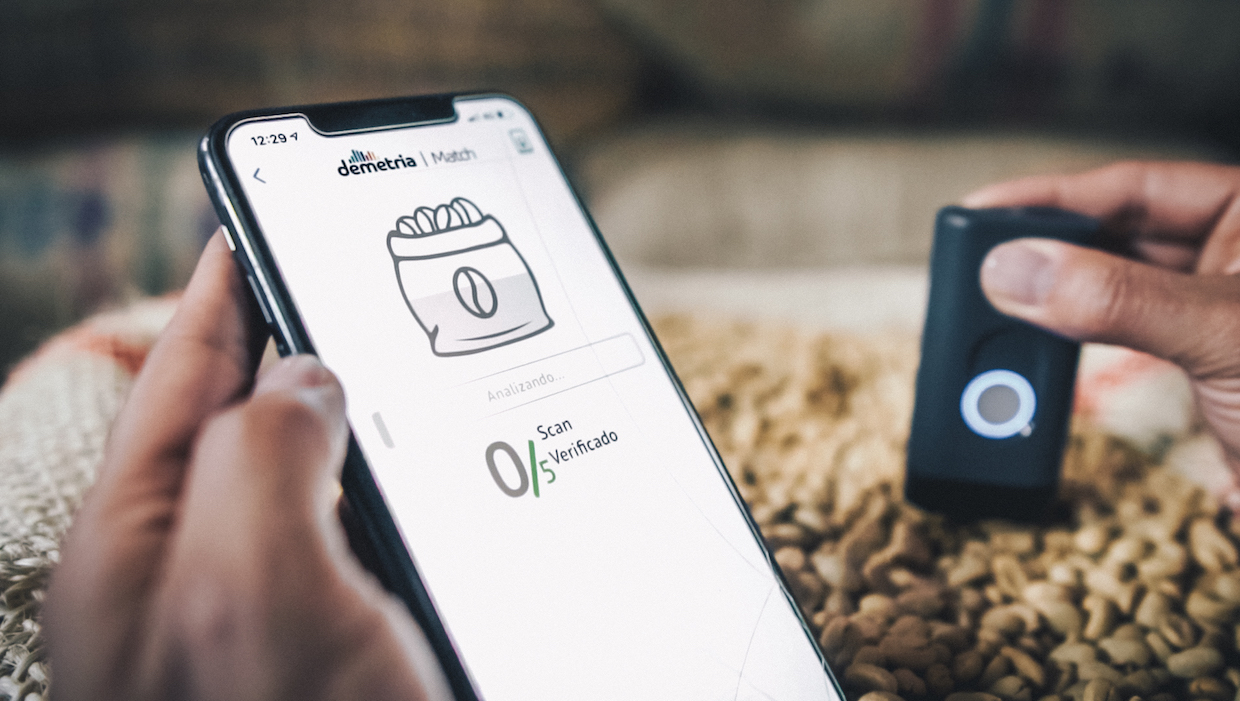 The Demetria Match app. All images courtesy of Demetria.

The investment was led by Celeritas, a group of private investors split between Israel and Latin America, and the technology involves the scanning of green coffee with a small handheld device that collects and sends data into the cloud for automatic analysis involving artificial intelligence (AI).

The device is equipped with near-infrared (NIR) sensors that shine  wavelengths of light onto green coffee, with each wavelength interacting differently with particular organic compounds inside the bean. These interactions are measured and interpreted by the system into what it calls a “sensory fingerprint,” in addition to monitoring biochemical markers including size, shape and color. 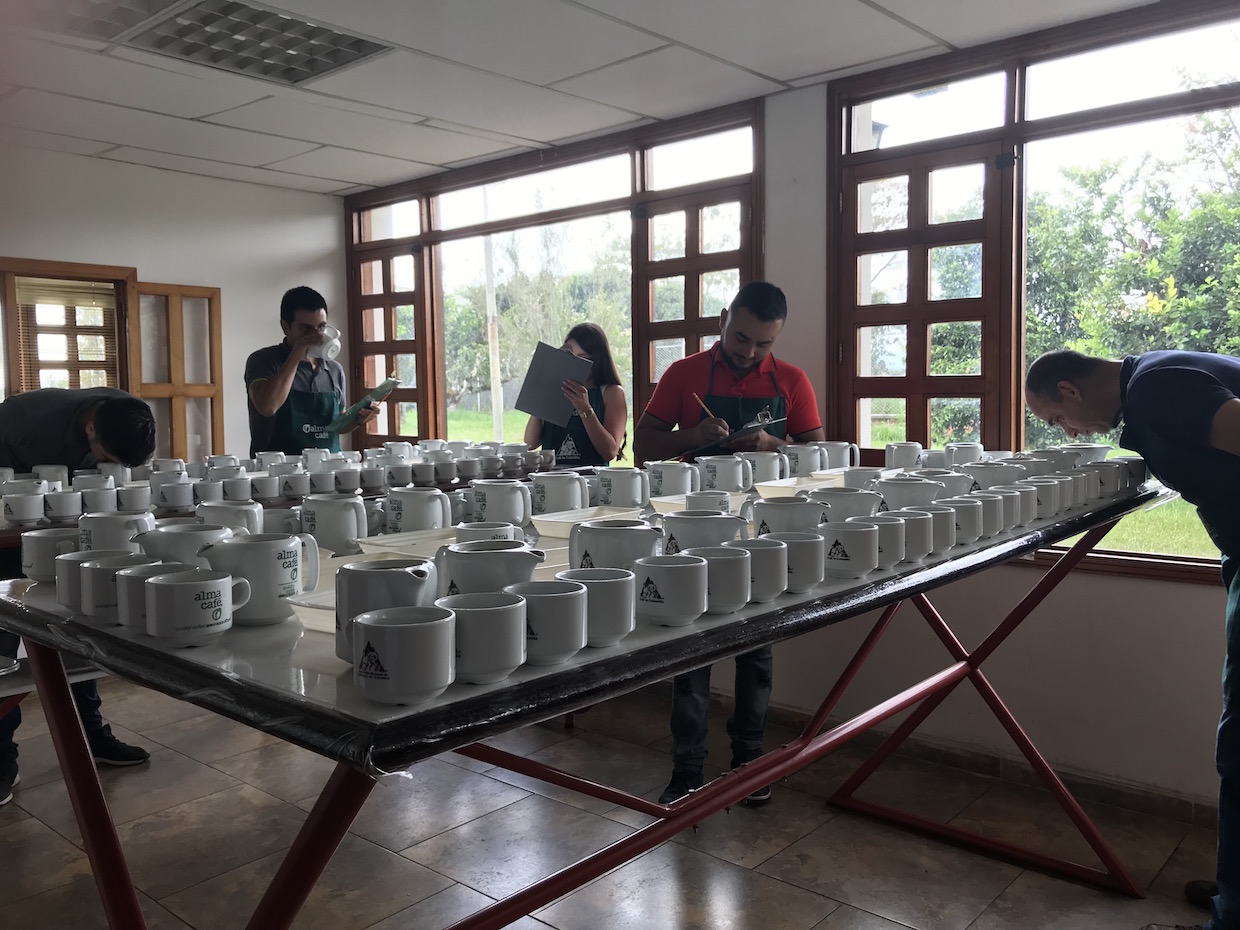 “We use this sensory fingerprint in combination with complex AI and cupping data to discern ‘taste,'” Felipe Ayerbe, CEO and co-founder of Demetria, told Daily Coffee News. “Demetria is an accurate predictor of cupping analysis. We have conducted the same process that is required to train and certify a ‘cupper,’ but instead of using human senses of taste and smell, we use state-of-the-art sensors that read the biochemical markers of taste, and couple that information with AI.”

To form the basis of its AI, Demetria is gathering quality analysis from human Q Graders who continually send data to the company, according to Ayerbe, which has compiled it into what it calls a “quality data cloud.”

“This data is essential for the machine learning process central to the technology, which will continue to improve as it incorporates more data from cuppers,” said Ayerbe. “Demetria will not replace cuppers. Instead, our tools complement the work of cuppers in every part of the process. Our technology helps identify samples that do not need to be cupped, for example the ones with cupping defects, but there is always a portion that requires cupping. Demetria enables the better use of cuppers’ time.”

Demetria also envisions a potential benefit for farmers. With limited time and resources for cupping at the farm level, growers could potentially capture more income by allowing the system to sort out high-quality lots that might have otherwise been mixed in with a stream of conventional coffees. 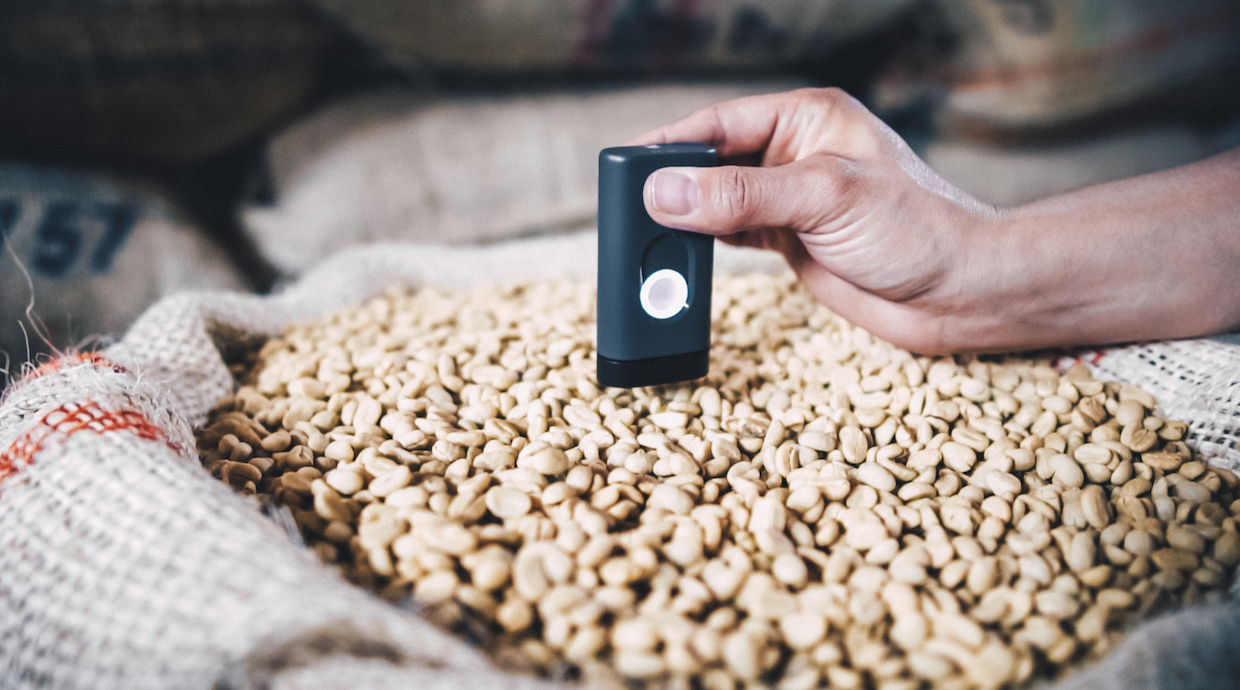 “At the farm level and for the first time, farmers will have a tool to measure and manage the quality of their crops,” said Ayerbe. “This also applies at the cooperative level.”

Headquartered in Bogotá, Colombia, with operations also in Israel and Brazil, Demetria said its technology may soon be applied throughout all production stages, from cherry to green.

“The ability to assess cherries during the growing process and provide information on when they’re ready to be picked or harvested is on the horizon for Demetria,” said Ayerbe. “We also are developing applications that enable farmers to manage and control their fermentation processes in real time.”

Along with Ayerbe, co-founders of Demetria include several other tech-focused, self-described “serial entrepreneurs” based in Israel, Argentina or Bogotá, including Eduardo Shoval, Yori Nelken and Salomon Kassin Tesone.

The company has enlisted former CIO and CTO for the National Federation of Coffee Growers of Colombia (FNC) Sonia Acuña, to be vice president of business development; longtime coffee procurement and logistics professional William Vinck as head of EU business development; and Carolina Pérez, formerly of the FNC’s research institute, Cenicafé.

In addition to its core focus of green coffee quality analysis, Demetria is currently working on various software and related app projects that can help extend its usefulness to actors farther downstream, all the way to the roastery. 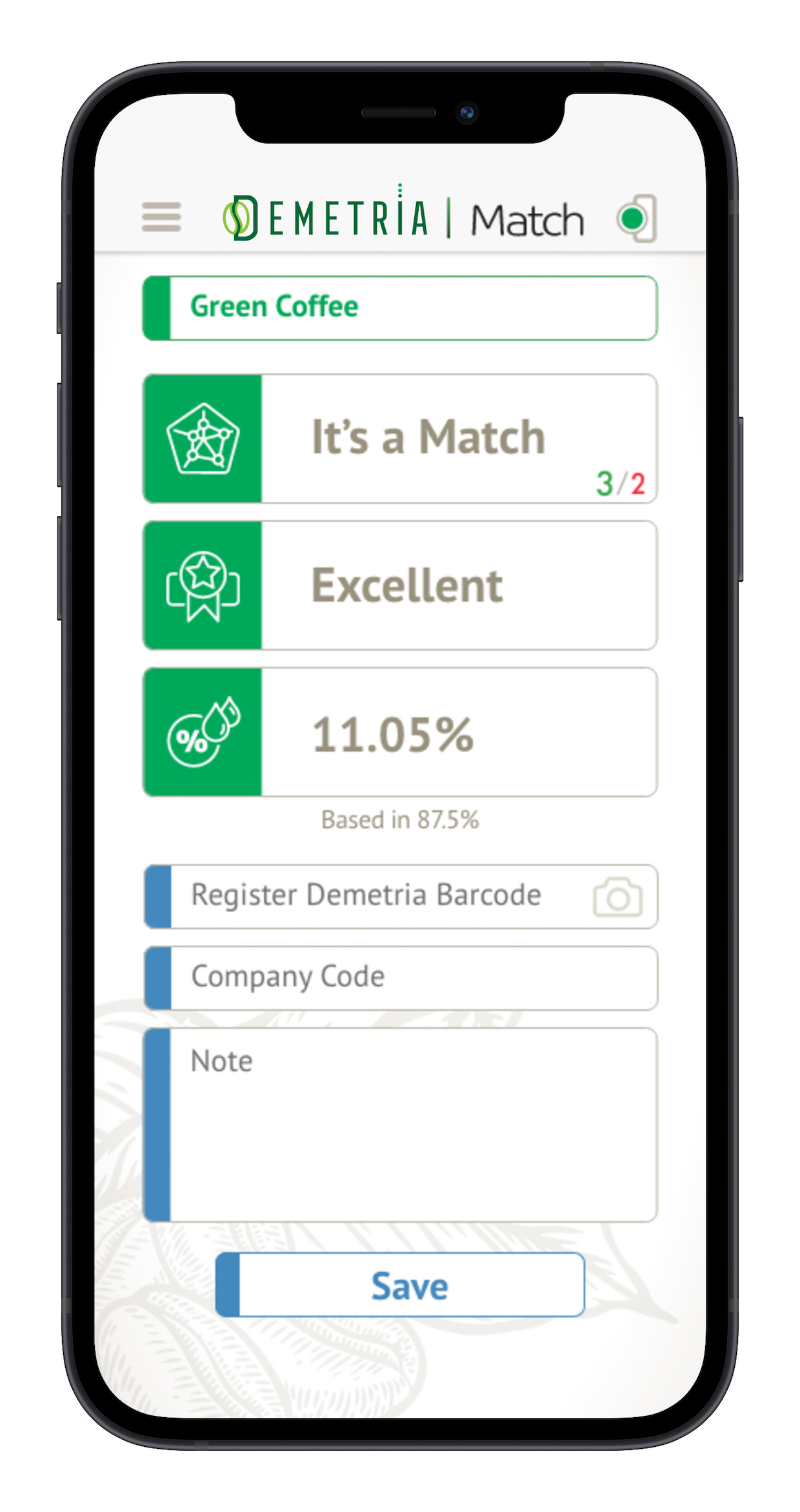 Two apps available for download now include Demetria Vision and Demetria Match. Vision, which is still being tested in advance of a formal pilot launch this summer, measures and records bean granulometry and visual defects. Match offers roasters and traders a stored customized bean prospecting profile, for identifying the specific qualities of coffees they happen to be seeking. A humidity measurement app is also currently being piloted.

Future apps still in development include a traceability app; one for the early detection of general quality characteristics linked to cupping defects; a fermentation-oriented app and more.

“Every client we speak to believes this is the future of the coffee industry,” said Ayerbe. “The demand is there for quality coffee and the application of this technology will significantly increase the supply of top quality coffee.”

How much is such a device and its application and where can you buy it? ([email protected])