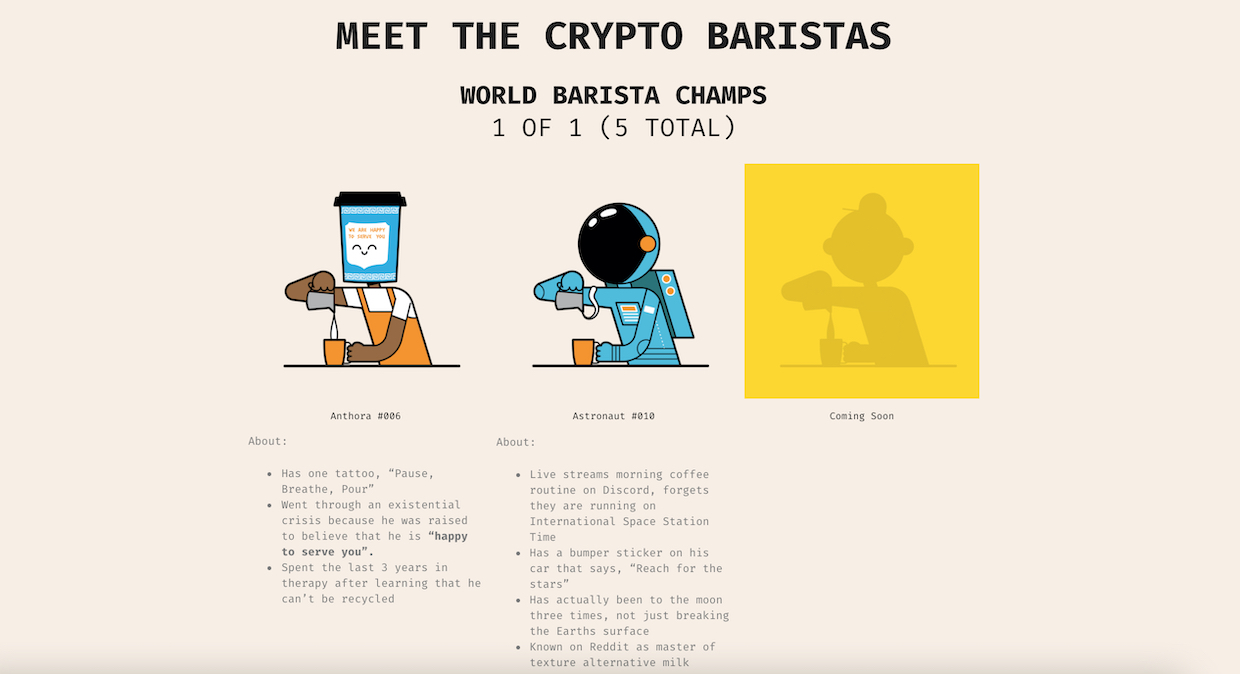 The company started by brothers Dan and Nick Hunnewell out of the Regalia Roasting Collective in Queens has launched Crypto Baristas, a bunch of illustrated, coffee-pouring characters available on the blockchain for purchase as NFTs through the Rarible platform.

In an announcement of the launch today, Coffee Bros. said the income from the NFTs will be put towards the roaster’s first real-life physical cafe project in New York at some point in the future.

“The goal of Crypto Baristas is to build a community of like-minded individuals that appreciate art, caffeine, entrepreneurship and innovation,” Dan Hunnewell said in an announcement of the campaign. “The project’s ambition is to open a physical space in NYC where art and innovation are at the forefront.”

In addition to the digital asset of the NFT, owners are also being promised membership perks for future cafe and online offerings; they’re being invited to join the Crypto Baristas Discord channel; and they’re promised a voice in the management of the “Barista Bank,” a kind of community fund being set aside from 15% of the NFT earnings.

Said Coffee Bros., “Some potential uses for the Barista Bank can support charitable organizations in the coffee space, advance the Crypto Baristas project, or start something new.”

Coffee Bros. was one of the first coffee companies to merge the centuries-old coffee trade with the wacky new world of NFTs, when earlier this year it offered 150 NFTs featuring Ethiopian coffee producer Asefa Dukamo from Bensa Zone, Sidama. A small number of NFT buyers were also able to purchase Dukamo’s roasted coffees, while a percentage of proceeds were sent to the nonprofits Cup of Excellence and World Coffee Research.

The Crypto Baristas project is being presented as a series of seasons, with Season 1 launching today. A handful of the eventually 60 characters illustrated by Tony Bui have been unveiled. Each character has been assigned multiple skill levels — or “rarities” in the NFT world — with 455 Season 1 NFTs eventually available for purchase.

The company says that a Season 2 will involve voting among Season 1 Crypto Barista owners on future character concepts, merch releases, and the direction of future funds.

We loved visiting your site. We enjoy NFT. Visit our portfolio at http://cryptonftmarketplace.co. We appreciate any likes. Have a great day Thank you

An extremely dope nft collaboration would be with Jimmy Butler’s Bigface coffee brand, especially if the Miami Heat win the nba championship. Not only will it bring a bunch of fresh faces to your brand but also to the nft market… If that relationship happens to pans out just hook me up with a white list spot along with some nfts and a autographed bag of coffee from jimmy butler