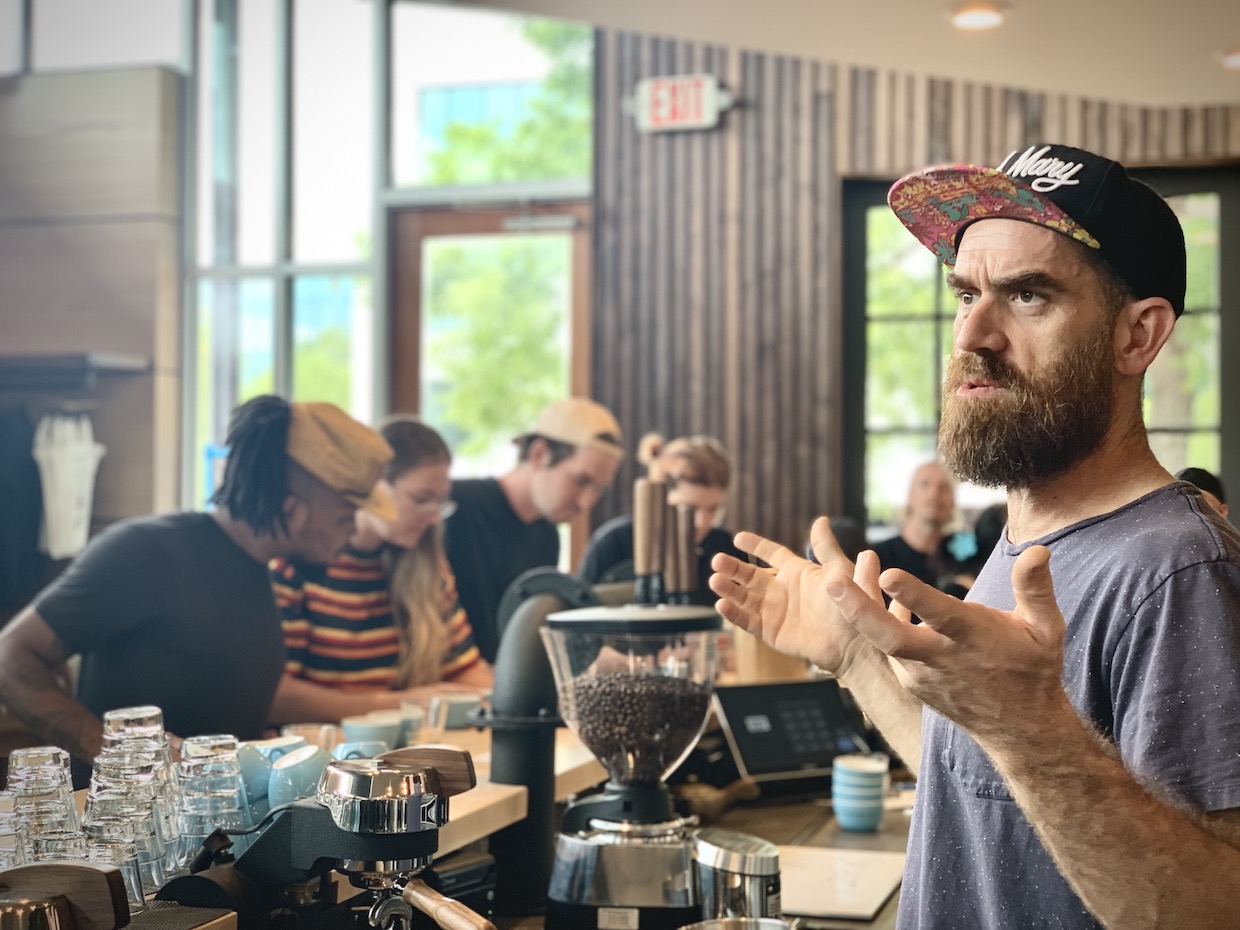 The 2,500-square-foot cafe that opens to the general public this week in the heart of South Austin maintains the brand’s equally obsessive focus on high-quality coffee and food, with an all-day breakfast and lunch menu focused on fresh and seasonal fare. 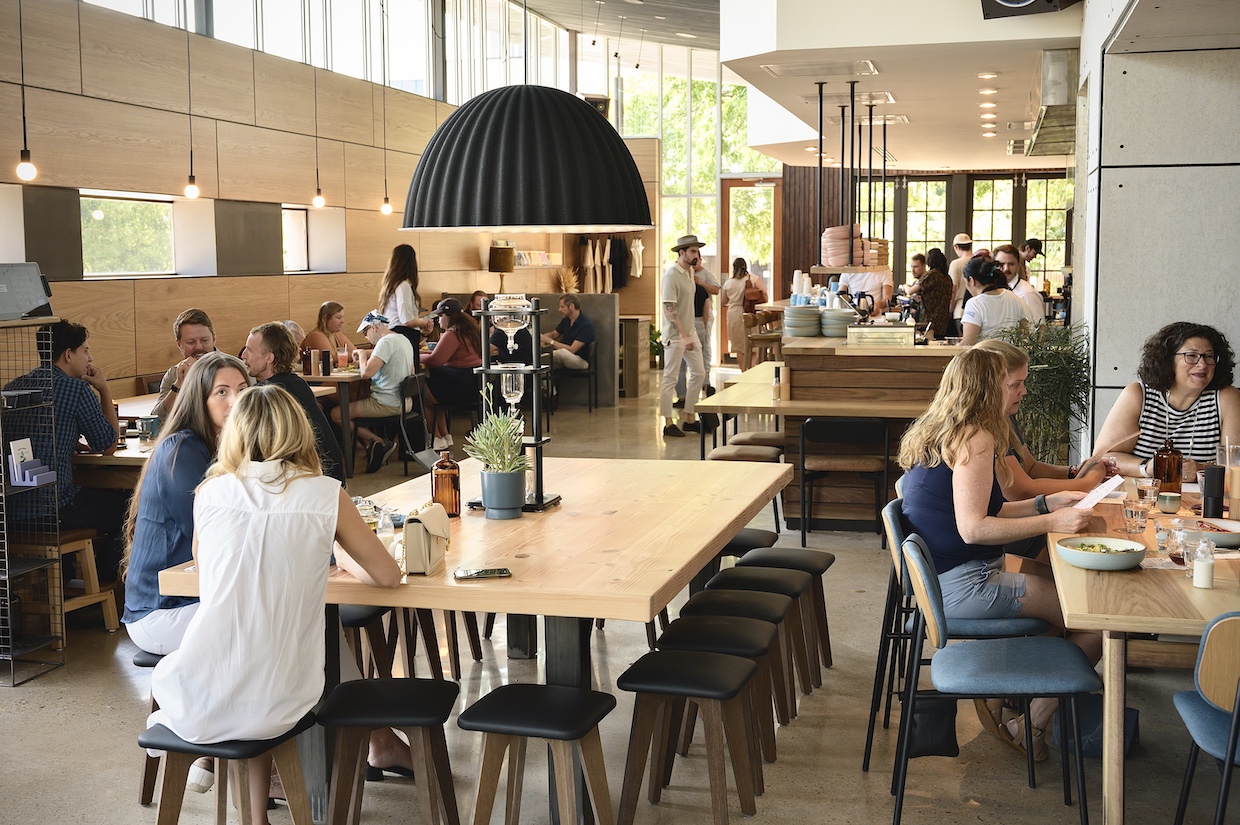 “The bones [of the building] just work well for open space and light, so we leaned into that,” Proud Mary Coffee Roasters Senior Vice President Matt Lounsbury told Daily Coffee News. “There’s also heaps of cues to let you know you are at a Proud Mary Cafe, from Sansui Speakers to the Czech train station clock — the same one from Portland and Melbourne.”

Additional Proud Mary buildout traditions in Austin include dining tables built by the company’s founder and CEO, Nolan Hirte, and counter seating stools built by Hirte’s father. Customers will sit in those stools for an experience akin to the Aunty Peg’s tasting bar at Proud Mary in Melbourne, where guests are treated to intimate presentations of highest-end coffees, other educational experiences and tours of the facility by Proud Mary baristas. 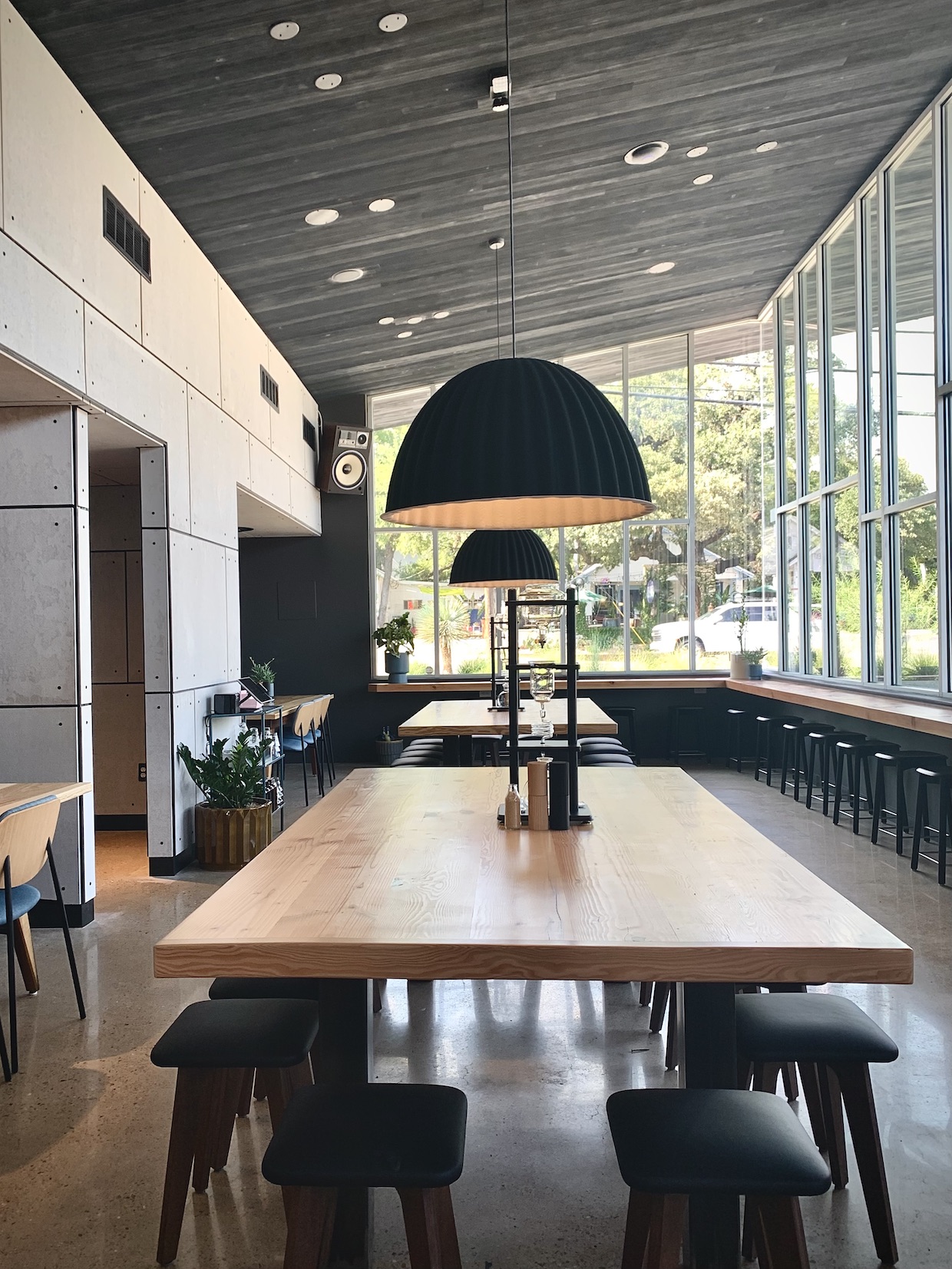 “We use Feng Shui principles in a very subtle but intentional way throughout the space, [such as] purple paint behind the hardiebacker wall panels, placing the ‘PMC Intentions’ behind a larger mirror in the space,” said Lounsbury. “These are things we do with all our spaces.”

Proud Mary’s uncompromising approach to coffee is maintained in Austin with its third custom-built under-counter Synesso espresso system featuring five group heads integrated into the coffee bar. Beans for that program are flown in from the Portland roastery and then frozen for quality control. yet in Austin, Hirte takes Proud Mary’s signature frozen hopper system to a new extreme. 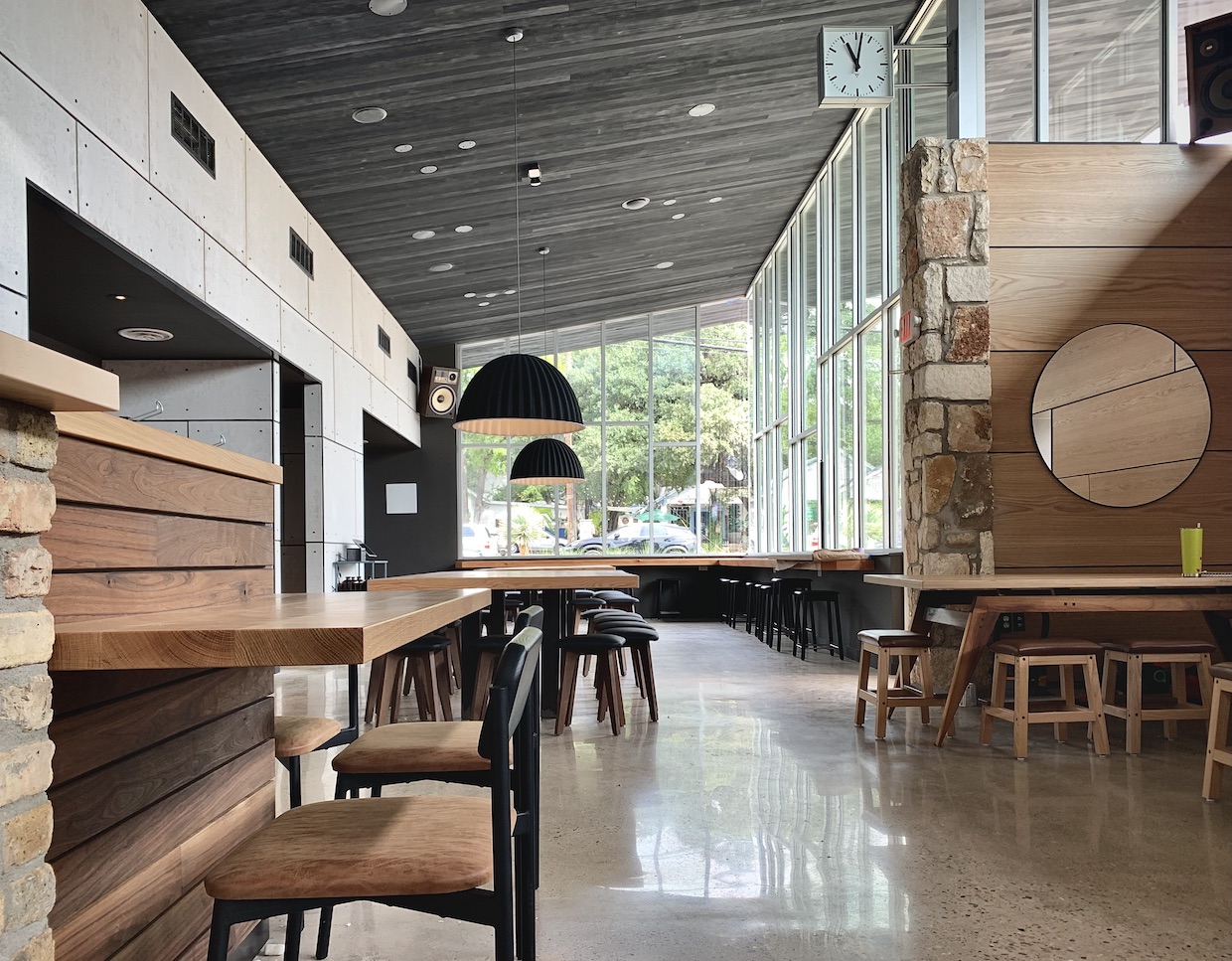 A 96-inch freezer is currently being mounted on the wall behind the Austin bar. Through its glass panels, guests can see 12 hoppers of coffee that maintain a temperature of around -6°F. Three of the hoppers are reserved for “Showcase” beans that are served as either espresso or pourover on a monthly basis, and nine are for the shop’s “Deluxe” pourover program.

Custom dosers mounted under the freezer beneath each hopper drop beans directly into a Titus Nautilus grinder. The grinder is also mounted on rails, allowing it to slide between the dosers. Frank Durra of Titus Grinding built unique parts for the system and flew to Austin to help design and assemble it.

“Nolan and Frank hit it off like peas in a pod. They’ve got lightning bolts shooting out of their heads when they talk,” Lounsbury told DCN. “Nolan has been testing all of Frank’s stuff and iterations of what’s behind this whole freezer coffee setup for over a year at his house.” 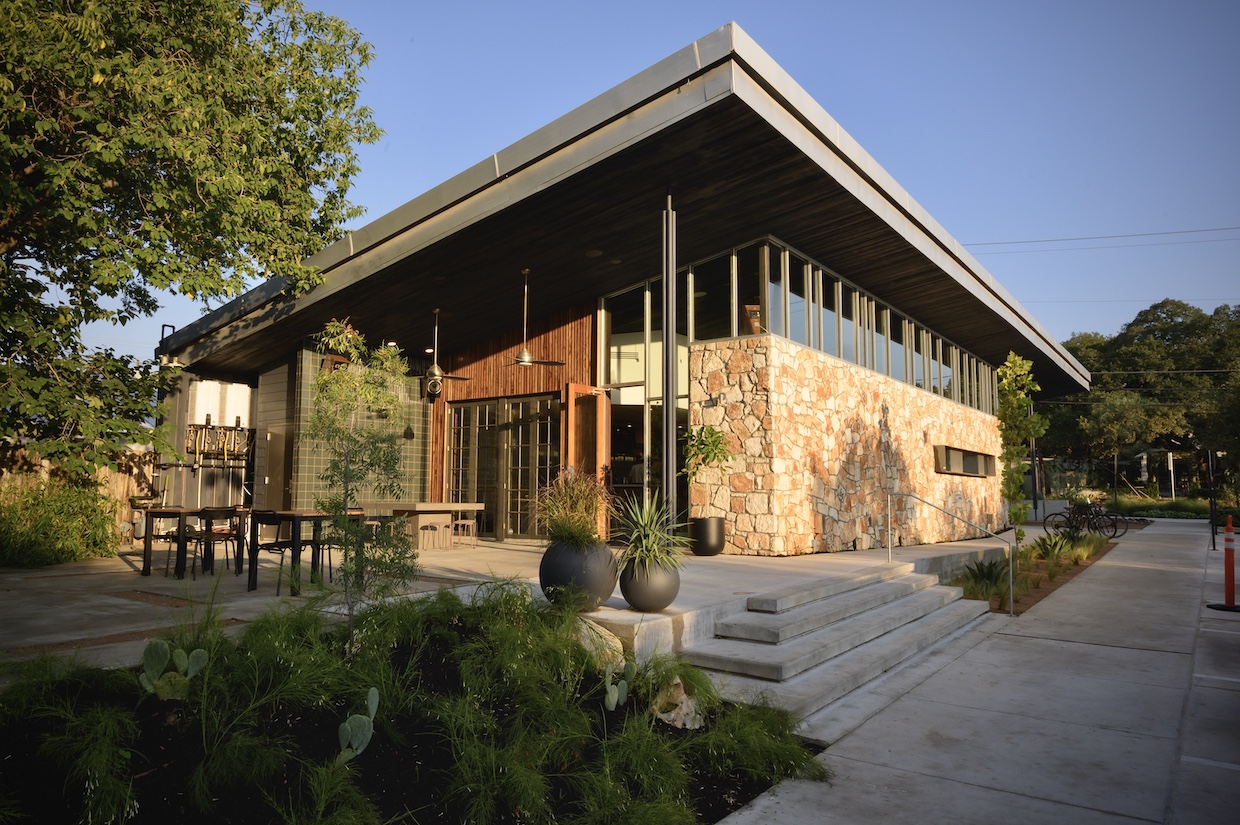 The grind setting is adjusted by the knob on the grinder’s face, and then as the barista slides a doser back towards a hopper, it rolls over a switch, activating the grinder. As the barista pulls the doser back to deliver a dose into the grinder, a timer set to 10 seconds or less is triggered and then turns the grinder off automatically. The dosers are calibrated by volume, and then each dose is confirmed by weight as baristas finish preparing each drink.

“Austin feels like the center of the universe right now and we are excited to be a part of it all,” Nolan Hirte said in a recent press release. “After a couple years living in Austin, it simply feels like Australia — which is to say it feels like home. The city’s established and remarkable food scene and a hungry, excited coffee community are our happy place.” 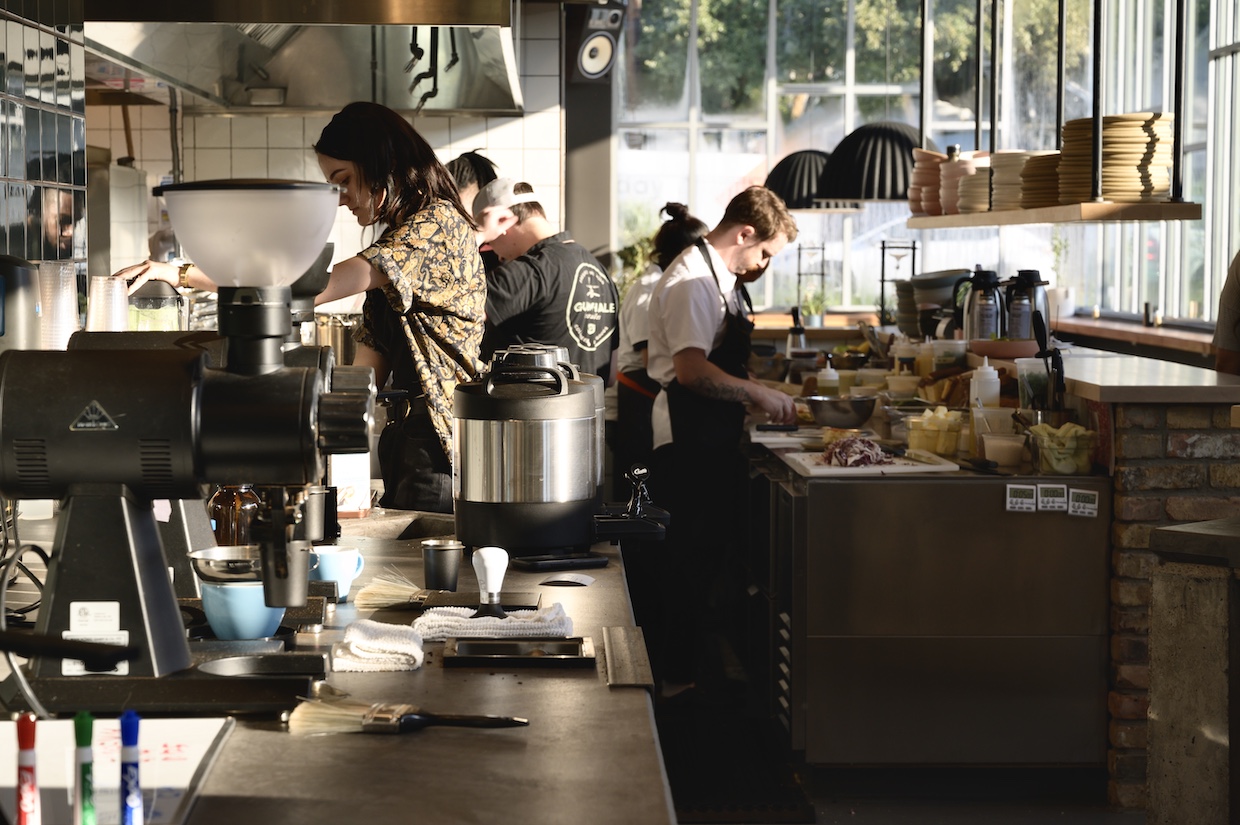 Growth has also continued for Proud Mary in Portland, where in December of 2020 the company stepped up to a 30-kilo Giesen roaster and relocated production into a new 5,000-square-foot facility with a massive walk-in freezer supporting its coffee freezing program. In the year to come, the company aims to open an Aunty Peg’s tasting room there, as well.