Aaron Ultimo and his wife, Elizabeth, came from modest beginnings in the coffee business to running Ultimo Coffee in Philadelphia, one of the country’s most renowned coffee bars, recently named by the Daily Meal as the best in the United States. (The couple recently opened a second location at 22nd and Catherine Streets in Philly’s Graduate Hospital neighborhood.) 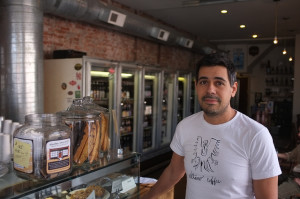 Ultimo serves single-origin coffees from Counter Culture, making numerous Chemex-brewed coffees available each morning. So perhaps it was with some morbid curiosity that Philly.com recently asked Ultimo to sit down with them and review some coffees he hadn’t even sniffed at in years: The Burger King “smooth roast;” the Wawa Coffee African, Kona and Latin American blends; and Dunkin’ Donuts original roast and espresso.

Click here for the full Philly.com profile on Ultimo, but here is a snippet of his review:

Sure, both BK’s “Smooth Roast,” introduced in late March, and McDonald’s McCafe were quite weak, not something he’d go out of the way for.

He also wasn’t a huge fan of Wawa’s limited-time African blend, which he called “woody,” “bland” and “not like an African coffee.” (Africa, he explained, is “the birthplace of coffee,” and Kenyan beans are “the best of the best.”)

But he appreciated Wawa’s effort to rep that continent, along with the Pacific Rim (via Hawaii-grown Kona – “nice mouthfeel,” said Ultimo) and Latin America (via 100-percent Colombian) – all three major coffee-growing regions. He also tried Wawa’s regular and dark roasts. His favorite there was the Colombian.

He also took somewhat of a shine to Dunkin’s Original Roast, which he guessed was fresher, “mainly because all they sell is coffee. . . . Dunkin’ Donuts is a coffee shop disguised as a doughnut shop.”

His least favorite try, however, was Dunkin’ espresso – not frequently ordered as a plain bev, to be sure. He thought it tasted “like rubber.”

Two celebrity chefs recently went on a similar cupping mission in Houston. David Chang of Momofuku and  Traci Des Jardins of Jardiniere were asked to travel to the Space Food Systems Laboratory at the Johnson Space Center in to try some of the latest culinary developments. The chefs tasted the latest in space coffee, courtesy of three Rice University students.

The Atlantic has the results:

The pair sampled two different be-baggied beverages — Kona Coffee With Cream and Kona Coffee With Cream and Sugar — each containing rehydrated coffee paired, as the baggies’ labels suggest, with the traditional accompaniments. And the chefs compared the results sort-of favorably to coffee of a more Earthly variety: Astro-coffee tastes a little like Folger’s, they said, or Taster’s Choice. Not great … but, hey, not bad, either.

For a full recap of the chefs’ kona-in-space cupping, visit The Atlantic.

I am stunned that someone representing a coffee bar known as: “the best in the United States” would find Dunkin Donuts coffee even drinkable. Because I own a roastery and coffee bar in South Eastern Ct, I am interested in knowing what the big boys are up to. I have been sampling Dunkin’s coffee intermittently for 5 years just to keep an eye on them to see if they would truly bump up their game. I have yet to have anything from them that is drinkable. I always have them serve it into my stainless coffee cup, no styrofoam for me thanks…. I ran out and bought a cup after my initial read of this story thinking that they had finally made a big move. Yuck! No change. I give them high marks for consistency. I also have to say that a very high percentage of their customers but copious amounts of cream and sugar which says a lot..
We don’t have any Wawa’s here in CT so I can’t comment on their offerings, but we obviously have McD’s and I also monitor their coffee. It is also terrible but a notch or two above Dunkin’s. Perhaps the Dunkin store found out he was coming and swapped in some real specialty coffee, but I doubt it… When you have Counter Culture coffee which is pretty good as a baseline, I am dumbfounded how DD’s styrofoam cupped “coffee” can make any kind of positive impression.