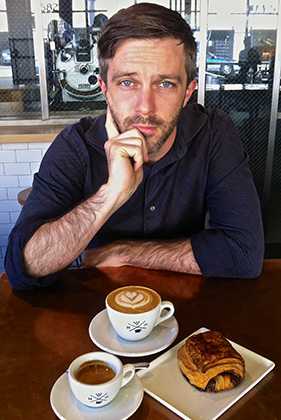 2010 World Barista Champion Michael Phillips is the only one of the founding three partners who has seen Handsome through the end, and in a heartfelt public letter today, he sheds some light on the personnel transition taking place:

I’ve stepped into a role as the company’s Director of Training; Charlie Habegger, Handsome’s head of coffee, has joined Blue Bottle’s green coffee buying team; and Kristine Chong, who helped throw so many incredible Handsome events, is now leading events nationwide for Blue Bottle. That’s not all, either. Our roasters, baristas, wholesale department and production crew are all coming along — and looking forward to the next step. I’m thrilled to be a part of this new family, to reach for new goals, and to tackle new struggles.

Phillips also says this brand “sunset” presents an apt time for introspection, and reflects on his time at Handsome Coffee and what he and many others helped create there:

Tyler Wells, Chris Owens and I started Handsome with a vision that arguably was only half-formed at its inception. We knew we wanted a simple menu, amazing coffee and to be nice to people, but outside of that, it was pretty much a blank canvas. Since 2011, that canvas was colored by the hands of many more people than just us three: the team at Creative Space, who knew right where this little gem was tucked away at in the Arts District. Our friends at Ptarmak, who helped us become the company we wanted to be. Nathanael Balon, of WoodSmithe, who took a shell of a space and turned it into a physical manifestation of a shared dream. And my dear friend Diana, who helped make sure our message was clear and true.

These are the friends who became co-workers, the co-workers who became family, and the family that helped us do so many things we once thought impossible. There were so many good people along the way that made Handsome the company it was. They are an essential part of all the memories we now cherish so dearly. Within just three years, that whole team contributed to the conversation of specialty coffee in ways that hadn’t happened before. In that same window of time, we were a big part of one neighborhood’s growth – a neighborhood that, in my opinion, is a crucial piece of one of the most exciting cities of our time.

It was an incredible honor to embark on that journey with all of you – a journey that takes an exciting new turn this week. I will forever be grateful to every guest that walked though those doors and every co-worker who labored alongside me. More than a coffee company and more than a brand, Handsome was a collection of amazing individuals who were able to share a vision of hospitality and sincerity with everyone they met.