Despite uncertainty still surrounding the Brazilian crop currently being harvested, the average price of commodity coffees throughout the world dropped to its lowest level in five months, according to the latest statistics from the London-based International Coffee Organization.

The group’s ICO composite indicator price — which reflects the trading of Colombian Milds, Other Milds, Brazilian Naturals and Robusta — dropped 7.3 percent from May to $1.51 U.S. dollars per pound in June. In good news, the price volatility among all the commodity coffee categories throughout June decreased, improving on what the ICO described as unprecedented volatility in the month of May. Additionally, the composite price began to rebound toward the end of June, suggesting an upward trend for July. 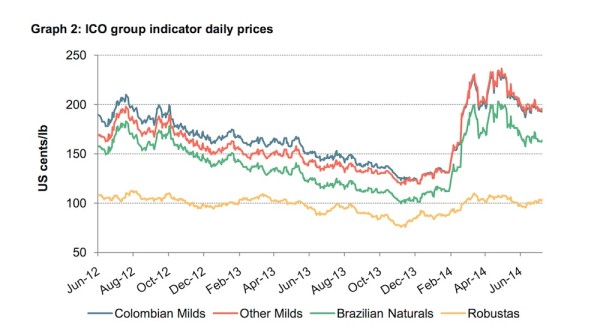 Graph by the International Coffee Organization.

The ICO has also updated its production forecast for the 2013/14 year to 145.2 million bags, which it describes as “virtually unchanged” from 2012/13, despite a higher demand forecast — a factor that could signal higher commodity prices as the year progresses. The group says Colombian production is making up for shortfalls expected in Central America due to La Roya and in Brazil due to unfavorable weather this Spring.

Production of Robusta, meanwhile,  is expected to jump 6 percent to 59 million bags over last year, in large part due to increased growing in Vietnam.