Kopi Luwak vs. Geisha at Temple Coffee’s Most Controversial Cupping

One of our more interesting, and definitely most controversial public cupping will take place today at 2pm. 2829 S street, free to all.

“Controversial cupping” is not a phrase you hear every day:

@DailyCoffeeNews we involuntarily acquired some civet. Cupping it against specialty. Dispelling myths.

“Involuntary acquired some civet?” WT heck is going on here? We reached out to Temple tweeter, trainer and educator Cole Cuchna to get some answers.

What follows is Cuchna’s explanation of how one accidentally stumbles into some kopi luwak coffee, as well as an admittedly biased account of the cupping, which pitted the kopi luwak side-by-side against some of the most interesting players in Temple’s current coffee lineup. The Temple team particularly wanted to stage a battle against two “monsters of marketing:” The kopi luwak and two Geishas of its own: 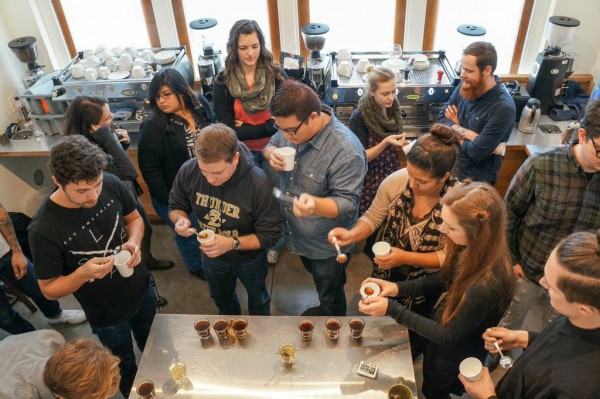 It’s not everyday that a bag of sh*t falls into your lap.

A wholesale client of ours recently returned from a trip to Bali. Being a well-intentioned coffee enthusiast, he generously brought us a bag of kopi luwak, a.k.a. civet coffee, a.k.a. the cat sh*t coffee.

The allure of this notoriously expensive coffee has nothing to do with the climate or elevation in which it’s grown. Nothing to do with cultivar. Rather, its fame resides in a very specialized form of processing. First, a small, cat-like animal called the civet eats coffee cherries, which ferment while passing through the civet’s digestive system. Once excreted, the indigestible seeds or coffee beans are picked from the feces in all their ooey-gooey glory.

In the coffee industry, it’s common knowledge that kopi luwak is little more than marketing hype. By most accounts, it tastes like the thing from which it came — remember, that thing is poop. That’s because the coffee is rewarded with high prices based on civet processing and little else. Not cup quality, not growing conditions, not traditional processing or varietal. But because of wildly outlandish prices and movies like “The Bucket List,” kopi luwak carries mystique and novelty that many people find attractive. That’s because kopi luwak is more than a coffee, it’s an event. Good, great, or horrible, it’s a story you tell friends. 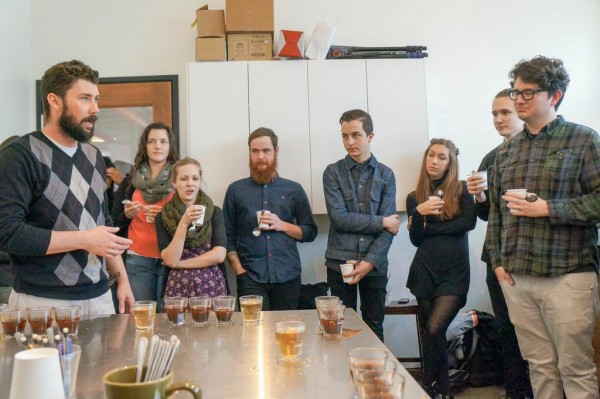 Ironically, you can say similar things about a coffee that many specialty connoisseurs revere above all else. A coffee that often demands outrageously high prices. A coffee you tell your friends about, and somewhere in the story is how much you paid for this illustrious bean. Of course, we’re talking about Geisha, a rare coffee varietal typically grown at extremely high elevation. While Geisha often yields what coffee professionals consider a superb cup, I think we can agree there’s a certain amount of mystique and novelty about it, as well.

The opportunity to pit these two monsters of marketing against one another is rare. And what better arena to showcase the showdown than our weekly public cupping? Let the people speak. Is Geisha really that good? Is luwak really that bad? How did they compare to a typical cup of specialty grade coffee?

To answer these questions, we assembled a diverse table of coffees: a Kenya Gichuka, the Kopi Luwak, a Costa Rica Honey, a Guatemala Geisha, and Temple’s Panama La Esmeralda Geisha, a coffee produced by the most famous coffee farm in the world.

While it was important to taste these coffees blind, we prefaced the cupping by informing our 20 or so attendees that indeed they’d be tasting a coffee that came from the south side of a civet. It was a “leave now or forever hold your peace” type of thing.

Turns out, we had an adventurous crowd. No one bailed. Game on. The rules were simple: try each coffee, take a few mental notes, and select a few favorites. We also encouraged them to try and pick out the kopi luwak. Be it amazing or unpalatable, let’s see if it stands out in someway.

The cupping proceeded with a mix of modest slurps, spit cups, and a little Coltrane to set the mood. I knew where the kopi luwak coffee was on the table, so I secretly watched the faces of the attendees when they tried it. Either they all had phenomenal poker faces or it wasn’t horrible enough to involuntarily convulse.

Once the tasting concluded, we pointed to each coffee on the table and asked, by a show of hands, which was their favorite. Aside from a few hands here and there, all the action took place when we reached the juggernauts on the table.

Pointing to the Kopi Luwak, we asked, “Who liked this one best?”

Pointing to the Esmeralda Geisha, “Who liked this one best?”

It wasn’t even close. Half the people in attendance raised their hand.

We asked the attendees to describe the Luwak. “Musty.” “Weird.” “An encyclopedia of roasting defects.” “Rancid barbeque sauce.” “Petrified dinosaur droppings steeped in bathtub water.” Ok, that last one was Washington Post food writer Tim Carman, but you get the picture. Clearly, in terms of cup quality or drinkability, this particular Kopi Luwak does not carry its weight in gold. 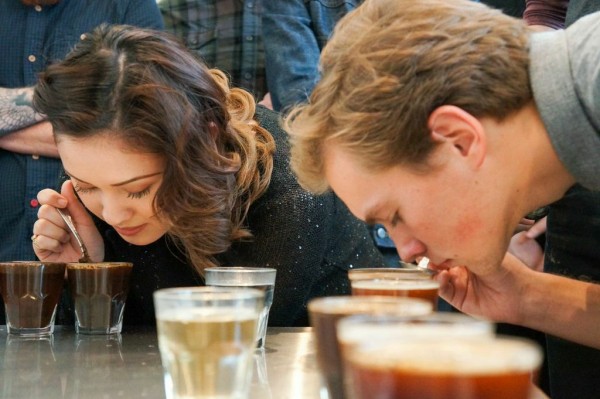 The Esmeralda Geisha, however, was described as “full of life.” “Maybe the best coffee I’ve ever had.” “Fruity, floral.” “Like nothing I’ve ever tasted in coffee.” Just my humble opinion, but these types of coffee experiences are worth the pretty penny. They’re memorable in pleasant ways. They escape the savage exoticism of luwak while retaining genuine, justifiable excitement and wonder.

We held this cupping to dispel myths — to challenge hype. As specialty coffee grows, inevitable is the inclusion of big marketing dollars and six-dollar-burger-like campaigns that attempt to cash in on an expanding market. Our attendees walked away with very solidified opinions about at least one such gimmick. They also walked away with that rancid bathtub taste still in their mouths, because holy crap, that stuff stays with you a while.

Best kopi luwak not establingsing a high acidity, but a mild acidity, smooth and soft to our stomach.
Just like best tea.
And the best luwak is from the best coffee origin, higher altitute, totaly wild. A product of nature.

While in other version, geisha, or natural process coffee exhibit the
Fruity, floral, some with high acidity.
And also very nice.

i enjoyed the cup. The whole bean nose reaked like peppermint patties and rum. It does get an earthy musty sell off grind. But can translate into a thick sweet, syrupy, chocolaty cup of coffee.

If you want the best Geisha and arabica offering from 5000 feet on the Blue Mountain, contact me. $120 a pound. Veganic offering. Message me for pricing for that green or other Colombian and Burundi offerings

Pitching Esmeralda Geisha against a random Kopi Luwak from Bali is a little unfair. Chances are he bought it at the airport or at Bintang supermarket. I’m not even the biggest Luwak fan but could have told you the outcome of this without attending a cupping or reading this! For the real Kopi Luwak experience check out the work of Matt Ross who is in producing exceptional wild Luwak from the Gayo highlands in the Aceh Province of Sumatra.

Hi Mark. We understand your argument completely. Our account was admittedly basis and of course it does not represent all Luwak completely or fairly. This article was more for entertainment purposes and to get people thinking about marketing in specialty coffee. Thanks for reading!

A good competitor for the Geisha would be genuine Wild Arabica Kopi Luwak, like Mark mentions.

Excellent point, Mark. I agree with you 100%.
I travel a lot to Indonesia and always cupped completely different Kopi Luwak, ranging from exceptional and unique to not nice ones.
So in order to make a good comparison is to get the best of each one, is to no the oringin.
I think the idea of the test was good but one cannot say that it is just for “enternaiment purposes” but using words like was used to describe the Kopi Luwak.

Yeah exactly. I like the bright acidity of Ethiopian beans so I know I’d prefer Geisha over Kopi Luwak, but this was a useless contest.

The comparison wouldn’t tell you anything.

Well the author did say it was a landslide against ‘this particular Kopi Luwak’. I had tried kopi luwak before and it has an amazing aroma quite unlike any other, yet the taste was nothing special. I can’t say I am a convert.

What I would like to see is a showdown between the Geisha and Blue Mountain!

When will we learn that is GESHA not, Geisha!?

Many people read this article as a fact. And, as a coffee enthusiast, I share many postings from this link in my Fb profile for friends and family to understand the industry.
In my opinion, random Kopi Luwak against the best known coffees of the world is not fair as a competition even for entertainment purposes only. I recently traveled to Bali and Sumatra and their coffee is not managed as I expected, so, choosing a good quality civet coffee is similar to choosing a good quality Geisha in Central America, there are several plantations and just few harvest the best of the best.

@Marta – my sentiments exactly!! I’m all for entertainment and fun events like the one described in the article – I just felt the article boarded on sensationalism!

You are definetely right! I know from experience on Bali all frams use caged Luwaks to produce the Kopi Luwak, what doesnt result in the original rare quality and taste of the Wild Arabica Kopi Luwak, that has been found in the wild of Luwaks living in their natural habitat and eat whatever they want. The caged Luwaks on Bali dont come close to the real and geuine taste and aroma of Wild Kopi Luwak from by example the Gayo Mountains region on Sumatra, Indonesia.

Kopi Luwak is goofy fun- but the caging is a problem, so a group in Holland is in cooperation with World Animal Protection and UTZ to deliver a standard for wild, animal friendly Kopi Luwak Arabica from Gayo Indonesia. Hopefully, this effort will provide some fun while also eclipsing the bad practices out there if people will choose to go with the certified wild version.

Just came across this article now but I wanted to set a few facts straight. Most importantly, a misconception that has spread like wildfire, probably for its sensationalist nature, is that the digestive system of the civet has something to do with adding quality to the coffee. This in fact has never been scientifically proven and only speculations exist. It is however a great marketing ploy, which is why a lot of people choose to believe it and spread the story around.

In addition to that, the mass farming of “Kopi Luwak” which entails force feeding civets has nothing to do with what luwak coffee is supposed to be and is a practice bordering animal molesting. If feed the civets shit beans, you’ll get shit coffee, it’s as simple as that.

The unique appeal of the real, wild Kopi Luwak is that the civets naturally look for the sweetest, best quality berries. This means that they have selected the prime fruit which will guarantee the best quality coffee as an end product. The price tag is then validated by the very limited quantity of end-product.

Unfortunately, 99% of Luwak production in Indonesia comes from caged animals and has nothing to do with the wild product.